It Came From the Back Room #2 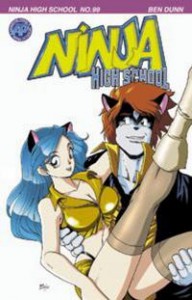 Quick Summary: I’m fulfilling my function of going through AABC’s one-million-plus back-issue room, restocking the boxes on the sales floor and pulling stuff to sell as discount/overstock/special items, and I’m currently on the letter “N.” Here are some of the titles I’ve been encountering:

Ninja High School is one of those long-lived but under-the-radar books, having been published by its writer/artist, Ben Dunn, for almost 25 years now. As its name implies, it’s a mashup of standard manga types — the alien princesses, the samurai warriors, the anthropomorphic entities, the title ninjas, etc. — in a high school setting. One of the very first American attempts to do a Japanese-style comic, it tends to read as fan-fic, but it has a clear affection for its many characters, and at the very least it’s always cute and fun. There are tons of spin-offs and variations, and the print runs are all low, so collectors often have trouble tracking down individual issues. We have a bunch of ’em in the cover-price long boxes near the front of the store right now, though, so if you’re an anime/manga fan (or want a cheap, cool gift for one), they’re worth a look. 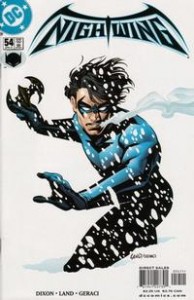 Nightwing was DC’s long-running Dick Grayson comic, using the former Robin’s status as a Teen Titan/Batman sidekick to generate a 14-year run (and, if Dick hadn’t been bumped up to Batman status on the “death” of Bruce Wayne, the title would still be ongoing). There’s an interesting price discrepancy in the title: while the Overstreet Guide has most issues after the first year at a straight $2.50, the Wizard expanded price guide from a few months ago has a number of them at $5, $7.50 or even $10 or more, mostly if they’re tie-ins to the various Bat-crossovers (“Officer Down,” “Bruce Wayne: Murderer,” “No Man’s Land,” etc.), or if they feature popular guest-villains like Deathstroke. Presumably, since Nightwing had a lower circulation than the main Bat-titles, completists find these harder to obtain (and, for what it’s worth, most of the issues that Wizard has higher in price are ones that we have fewer of , too, so maybe they are more scarce). In any event, the go-to guy during the first two-thirds of the run is scripter Chuck Dixon, who’s very good at delivering satisfying one- and two-issue stories that combine costumed characters and soap-opera-style sub-plots into a better-than-average stew of superhero action and angst. After Dixon leaves,the best of the later issues feature work by writer Devin Grayson, and are just the kind of comics that would be worth investigating if, you know, they were being offered at a discount or something…. 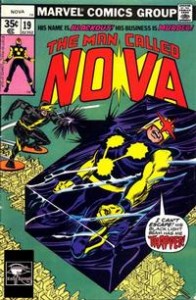 Nova was a ’70s attempt by Marvel to recreate the Spider-Man high-schooler-with-problems-and-powers formula; Marv Wolfman was the scripter throughout the first incarnation, with art by Sal Buscema on the early issues and a post-DC Carmine Infantino on the later ones. As pure Marvel house-style Bronze-age comics, they’re cool-enough escapist fun (especially if you can get ’em cheap — which, again, is the whole point of this post…). Later attempts to revive the character didn’t come to much, although the most recent version, part of the Abnett/Lanning-produced cosmic series like Annihilation/War Of Kings/etc., was the best since the originals. The real place to find Nova between the ’70s and the ’00s, though, was in our final title for this week: 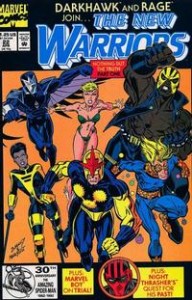 New Warriors was for the ’90s what Nova was in the ’70s: a straight-ahead Marvel superhero comic, colorful and direct, that worked especially well as an entry-level book for younger readers (if you were, say, 12 in the early ’90s and reading Marvel books, it was probably one of your favorite titles). A lot of this is due to writer Fabian Nicieza, who offered rock-solid, carefully-constructed stories (in those pre-trade paperback days, they were seldom more than two or three issues each) with lots of cool costumed characters (check that cover to the right: Speedball! Darkwing! um, Night Thrasher?), easily-digested and noble themes about friendship, loyalty and morality, and enough subplots to keep readers wondering what was going to happen next (one, involving the character MarvelBoy/Justice accidentally killing his abusive father, going on trial, getting convicted of involuntary manslaughter and spending time in prison, went on for years, and leant itself to more superhero-responibility speeches than even Spider-Man). The first 30 or so issues have art by Mark Bagley (whose clear, attractive ability to draw tons of different characters is perfect for the proceedings); he’s followed by Darick Robertson (!) for a year or two, and after issue #50 there’s a slow, quiet slide into oblivion with #75. As with Nightwing, Wizard has a number of the later issues, with their lower print runs, at considerably higher prices than Overstreet does, but whether there’s any legitimate interest in them by collectors remains to be seen.  If you’re more interested in cool reading copies than speculation, though — well, that’s what we’re here for, isn’t it?

With 40 years of experience in comic reading, collecting and reviewing, English Professor Phil Mateer has an encyclopedic mind for comics. Feel free to ask Phil about storylines, characters, artists or for that matter, any comic book trivia. He will post your questions and answers on the AABC blog. His knowledge is unparalleled! He is also our warehouse manager, so if you are looking for that hard to find comic book, ask Phil!
View all posts by Phil →
This entry was posted in News & Promos, Reviews and tagged Ben Dunn, Chuck Dixon, Darick Robertson, Devin Grayson, Fabian Nicieza, Mark Bagley, New Warriors, Nightwing, Ninja High School, Nova, Overstreet, Wizard. Bookmark the permalink.