The Latest and (Mostly) Greatest #93 by Dan!

It was a weirdly light week full of strange books, so let’s get right to this folks! 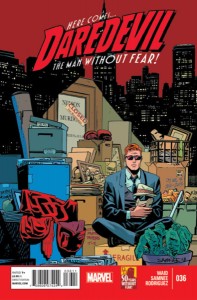 This issue brings an end to a lot of different things for Matt Murdock. Waid has built this story for a couple years, improving Murdock’s life while always letting him have a different new problem to deal with. Waid built stories that didn’t come off as aggressively depressing like his predecessors, and he found a delicate balance between all the conflicts that Murdock had to deal with. This series will just reset with a new first issue, but Waid’s story creates an opportunity to make sense. While it is starting over, it’s going to be the same team, and that’s just about the best thing that can happen. Samnee’s style on art gels perfectly with Waid and makes this easily the best book of the week and always a contender for best of the year. 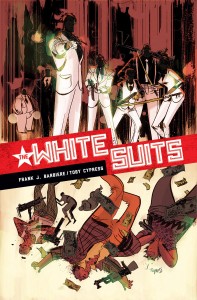 If you’re going to create a new book, and you’re going for a strange concept, with nothing as it seems, then you should completely go for broke. White Suits totally goes for broke. A random group of killers from the Cold War have surfaced again, and it’s up to a man who has no idea who he is to figure out what’s going on. He meets up with a woman whose father was previously involved with the gang and things just go crazier and crazier. This first issue puts a lot of pieces in motion, and Cypress’s manic style pairs well with the content. This apparently started in Dark Horse Presents and is just a four-issue mini, so it’s perfect for the casual reader that doesn’t want a long-term commitment. Great stuff. 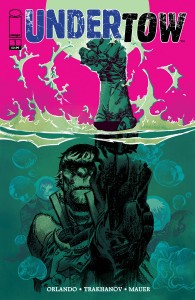 This first issue, on the other hand, does not hold up as well as White Suits. I had trouble following the overall story. Atlantis is a super-advanced civilization that’s making trips to land to try to take over? I think? They run into crazy things and have to fight fishes and humans are cavemen and this is a run-on sentence cuz’ I don’t know where to go with it. But that’s exactly how I feel about this book. I don’t know where it’s going, what it thinks it’s doing, or why I should care. This book was hyped as a possible next big thing, but I just don’t see that after this messy first issue. 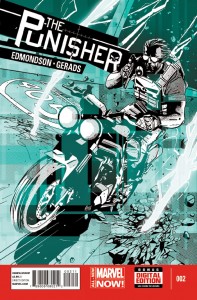 The second issue of Punisher has its ups and downs, but mostly I’m enjoying how this new story works with the character. Punisher is at his best when he just simply wants to kill bad guys, and that’s exactly what this book does. Frank Castle has gone to the West Coast to try to take down a big gang in Los Angeles. He runs into some bumps along the way, and that’s where I’m a little worried. The big surprise ending is a big Marvel villain, and it just won’t work. It’s not like Punisher is going to kill the villain, so there’s kinda no point to that part of the story. While I like the overall direction of the story, I worry about its potential. 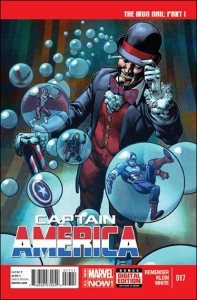 When this book came out, Remender was way too obsessed with father figures for Cap. After a weird Arnim Zola storyline that had some consequences and an odd Nuke storyline that didn’t really work, this issue actually shows some promise. Apparently Dr. Mindbubble has come to town to mess with Nick Fury, and the plan that he puts in place is actually quite creepy. In the ‘main’ story, Cap is still trying to help Jet Black (Zola’s daughter from the other reality) get used to the world we live in. Remender is going to continue to make this book as strange as he possibly can, but if the strangeness is going to be more like this and less about abusive parents, I’m in. 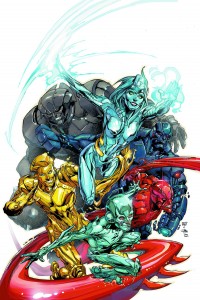 This re-introduction of the Metal Men has it’s pluses and it’s minuses. On one hand, it’s clear that Johns knows how these characters are supposed to work. They all get their own personality, they fight a suitably silver age villain, and some of it’s good old fashion robot-fighting entertainment. On the other hand, this is another attempt to ‘grim-n-gritty’ up a classic goofy silver age thing. Just look at the cover design! It’s a little off-putting and odd, and it never quite works in the book either. They’re trying to make these guys seem super cool and edgy, but mix it in with their weird stutters and tics. It just doesn’t mix well together. However… if, as the end implies, Cyborg is recruiting them for a big Forever Evil fight, that could be massively entertaining.

And now the Quick Hits! 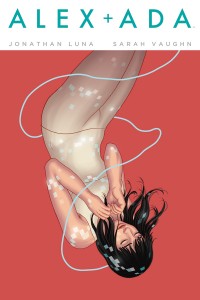 Alex + Ada #4 Writer: Sarah Vaughn Artist: Jonathan Luna: This book is just weird. It’s what I expect the movie “Her” to be like. And of course I absolutely love it. It’s a great book with an incredibly interesting and compelling concept.

Seekers of the Weird #2 Writer: Brandon Seifert Artist: Karl Moline: This book answers some questions and creates others. It’s a fun Disney book with potential to get very, very interesting. 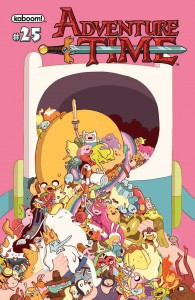 Adventure Time #25 Writer: Ryan North Artists: Various: Several guest artist contribute to this fun anniversary issue. It’s as great as it always is, and this works as a one-shot. Absolutely fantastic stuff.

Batman & Two-Face #28 Writer: Peter J. Tomasi Artist: Patrick Gleason: So, with no warning, Two-Face kills himself? Yeah, we know how I’m going to react to that. No thank you.

And that’s the week!. See you folks next time.