The Latest and (Mostly) Greatest #92 by Dan!

All right folks, we’re back in action. A smaller week, but lots of good stuff, so let’s do this!

Picking up right where the first issue left off, Saviors kicks up the action with Tomas fleeing from a weird flying lizard dude that used to be the sheriff. He gets rescued by another guy, who has some of the answers, but not quite everything. They run off to Mexico, but the sheriff seems to already know pieces of the plan. Robinson’s writing is at its best when he has some type of long-term plan, and these first two issues seem to be building up a lot of concepts. I wouldn’t be surprised to find that Robinson is putting together some kinda of mega-epic story with a huge pay off. J. Bone always looks like Darwyn Cooke (Bone usually inks Cooke’s work), but this book also has similarities to Paul Grist in it’s simplicity. I’ve loved the first two issues and I look forward to more.

I don’t think I like Hickman as much when he’s on mainstream Marvel books. It’s really his creator-owned books that shine through. East of West is the type of book that is going to be a very slow burn. It reads like a lonnnnnnnng TV show that has a bunch of ideas and plot points running around. While we know that Death is the “main” character, Hickman only advances his plot slightly before focusing on one of the houses that are in power in this version of the United States. He puts forward a couple of interesting ideas about the relations between the countries, and shows that everyone in this book has a different version of a plan. It’s fantastic, but I feel like it will read better as a finished product, rather than issue by issue.

Would it be weird to says this issue has “heart”? Cuz’ it does. After the craziness that was City Fall, the Turtles have retreated into the woods to kinda figure things out for themselves. Michelangelo gets the starring role in this issue, working as the narrator to kinda explain everything that’s going on for everyone. It’s an interesting issue, fully dealing with the fallout of past issues and showing just how screwed up some things can be. By the end of it, it’s clear that everything has changed, but the family and bonds will always exist. It’s a well put together issue, getting truly emotional at times, and providing some depth in a book that you wouldn’t really expect it from. Great stuff.

The best part of this issue is the lying cat dealing with the ghost girl. It all makes a lot of sense, and shows just how much Vaughan understands his characters. This issue sees a lot of the characters meeting for the first time (that we’ve seen) and an awful lot of fire. Vaughan handles all the situations and characters with ease, and it’s a lot of fun. Staples is the one that really blows me away. When I first saw her work, I wasn’t sure if I was really a fan, but she absolutely kills it on this book. All the characters have distinct mannerisms and movements that wouldn’t be created the same way by any other artist. This is one of the best books on the stands and one of the most easily accessible books (go get the trade!)

So… Future Batman was fighting a future Joker that had kidnapped Bruce Wayne. Future Batman was trying to prove that he was just as good as Wayne, and was pushing to not kill him. He takes down all the goons and shows that he probably can do it. Then he does kill the Joker. So he literally learned nothing. Of course, the future Joker isn’t dead, he gets killed by the real Joker? Setting up a cliffhanger I guess? And now this Future Batman is out and about killing people wherever he pleases. The End. I think we can all tell how I feel about this issue. Kubert’s art is what it is, you either like it or you don’t (I’m not especially a fan), but it’s his writing that is just physically painful. It’s just really, Really bad. Not even worth looking at.

Batman and Robin Annual #2 Writer: Peter J. Tomasi Artist: Doug Mahnke: A cute story about Dick Grayson’s first week as Robin. Worth it alone to take a look at the Mahnke art.

Uncanny Avengers #16 Writer: Rick Remender Artist: Steve McNiven: Great art on this issue too, but a story that feels like it’s going on way too long. I just need a real ending at this point.

Black Science #3 Writer: Rick Remender Artist: Matteo Scalera: As noted in the letter in back, this book reads like Fear Agent. That’s not a bad thing, but I need more issues to figure out if I care about the characters involved. 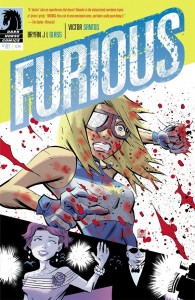 Furious #1 Writer: Bryan J.L. Glass Artist: Victor Santos: I see what this book is trying to do, but I just don’t care about the main character. I saw the twist from a mile away, and it’s just very “meh.”

Sledgehammer 44: Lightning War part 3 Writer: John Arcudi Artist: Laurence Campbell: For whatever reason, I really like this character, and his stories of fighting through WWII will always be worth checking out.

Thunderbolts #21 Writer: Charles Soule Artist: Carlo Barberi: The Thunderbolts make a deal with the devil, and it has a sweet twist. It’s good stuff. 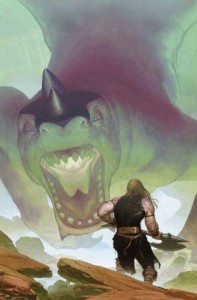 Thor: God of Thunder #18 Writer: Jason Aaron Artist: Das Pastoras: Thor makes friends with a dragon, but then that dragon has some serious issues. It’s a fun read, but then a shockingly sad issue that’s worth reading on its own.

Guardians of the Galaxy #11 Writer: Brian Michael Bendis Artist: Sara Pichelli: Hard to say if I care about this book. A crossover between two Bendis pieces just means there will be a lot of words and not much real action. Yawn.

Earth 2 Annual #2 Writer: Tom Taylor Artist: Robson Rocha: Earth 2 wasn’t that good to begin with, and the new writer hasn’t made it any better. We get the origin of the new Batman, and it’s very mediocre. Not really worth checking out.

And that’s the week! Go watch a Super Bowl, or a Suns game! OR!… buy some comics! Cool kids do that.

This entry was posted in Reviews and tagged Avengers, Batman, Guardians of the Galaxy, Saga, Teenage Mutant Ninja Turtles, Thor. Bookmark the permalink.