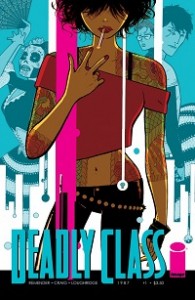 Since there are a fair number of books this week, let’s be different and break them down by company….

Image’s business model — for a set administrative fee, they provide a publishing platform for creators, who retain all rights to their work — has attracted a number of excellent writers and artists over the last few years, and led to a sprawling, diverse group of titles. Cases in point: Deadly Class, written by Rick Remender and with art by Wes Craig, is a stylishly-drawn (with a great cover) tale of a homeless kid with a tragic and shady past who’s recruited into a kind of junior League of Assassins; it’s gritty, intriguing, very good at world- and character-building, and includes a text piece by Remender about growing up in the Phoenix area that local fans should appreciate. Remender’s been doing a lot of splashy corporate superhero stuff lately — Uncanny Avengers and Captain America, especially — but his independent work, looser and more personal, is where he really shines; Image gives him the perfect place to do it. 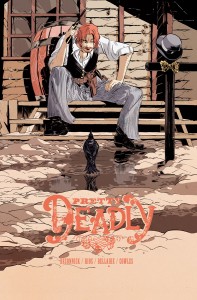 So too for Pretty Deadly, a quirky comic whose first few issues were hard to figure out (they got by on Emma Rios’s pretty, poetic art and the way she and writer Deconnick were able to create a mythic, surreal mood) that now, on its fourth issue, is revealing a solidly-plotted story about Death’s daughter that manages to combine elements of Sergio Leone and the Brothers Grimm into a haunting fairy-tale Western. Other publishers, more focused on the bottom line, might not have allowed this team the slow build it needed to reveal this as one of the better books of the year.

Finally, there’s Bad Dog #6, a comic that’s taken a long time to tell its first full story (issue #1 came out almost five years ago, in 2009) involving a depressed werewolf bounty hunter, his impressively-scatological midget sidekick, the cities of Phoenix and (especially) Las Vegas, a missing little girl, a number of attractive, hard-drinking women, and a bunch of other stuff. Here, too, another publisher would never have given this book the time to tell its tale, but it’s a good one — well-drawn (Diego makes the main character fantastically expressive, and is good at action, humor and sexiness in equal measure), existential in the best way, stubborn about its lack of easy answers or resolutions, but willing to allow for just enough of a hint of grace at the end. 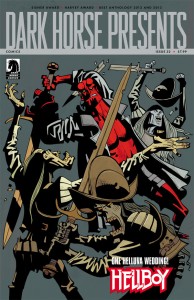 These three books are all from Dark Horse, the oldest of the smaller publishers (unless you count Archie…). DHP is an anthology title; at a $7.99 cover price, it’s a wonder that it’s lasted 32 issues, but that’s a tribute to its quality, and the creators it showcases (this issue, with its Mike Mignola Hellboy cover and story — although the interior art is by Mike McMahon — is a good example). Of the other nine stories offered, other standouts are the Mike Baron/Steve Rude Nexus chapter, the Caitlin Kiernan/Steve Lieber Alabaster conclusion (with a finale that seems pretty darn final for the character, although it’s told by an unreliable narrator), and the first installment of The Deleted, by the amazing Brendan McCarthy. The other five tales are of varying quality, but all have at least something to recommend them, and give readers that chance of discovering a new talent that’s one of the best features of 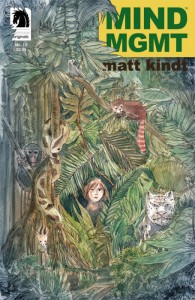 Mind Mgmt is a classic indy book, a dreamlike, paranoia-inducing tale of psychic secret agents that always manages to be surprising, confident and crisply-told, and which became a stepladder for creator Matt Kindt to work for companies like DC. Titles like Suicide Squad, Justice League of America and Frankenstein don’t let him feature his one-of-a-kind art, though, and he hasn’t abandoned his roots; this issue of Mind Mgmt is a reasonably stand-alone story about a girl who can… well, not talk to animals, but communicate with them, and its deceptively-primitive art and sympathetic approach are a great introduction to this comic’s charms. 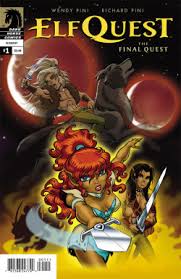 That leaves Elfquest, a book that’s been around in various forms since the ’70s, at a number of publishers (it and Cerebus are usually counted as the first “indy” books, walking the tightrope between mainstream and underground and paving the way for everyone else). Original creators Richard and Wendy Pini offer a fantasy story that’s a model of character development, lush art and clarity (even with the series’s almost 40-year history, they make sure to include everything that new readers need to understand what’s going on). The “Final Quest” title may or may not indicate a conclusion on the way, but Elfquest‘s long history, and the persistent talents of its creators, make it a book worth checking out.

Moving on to DC…. Batman has been the #1-selling comic since the New 52 started, and it’s easy to see why here — the issue begins by resolving the cliffhanger from last issue, moves the current story (set very early in Batman’s career) forward, has two long scenes establishing his relationships with Jim Gordon (not a commissioner yet) and Alfred, reveals a villain, and ends on another cliffhanger to bring the reader back for more. Snyder’s very good at propelling this sort of thing along, and Capullo’s art has been just right for the Dark Knight from the beginning — look at that cover, which screams “Buy me!” One complaint, though, is that the scene on the cover never occurs in the book itself (I hated that kind of bait-and-switch as a kid, and still do); another is that the villain involved is being recrafted as a much-more-murderous bad guy; I know that’s done to make him more formidable, but geez, guys, not everyone needs to be the Joker. This character was more intriguing (and even, sometimes, charming) the way he was before. More variety makes a better rogue’s gallery, you know? 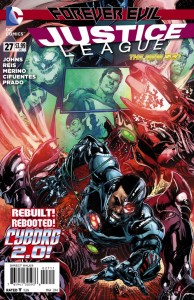 Justice League focuses on Cyborg (the rest of the JL being still trapped/out of sight), which is fine as far as it goes , but can we all agree that this Forever Evil stuff is taking ‘way too long? What’s here would have been fine as a five-page scene, but making it the whole book (plus an intro scene involving the destruction of one group of substitute heroes, and a conclusion introducing yet another) just seems like treading water. Having Reis only do layouts — under three different finishers — doesn’t help, either; for a $3.99 book, this should have been a bigger, and more coherent, chunk of the overall story. 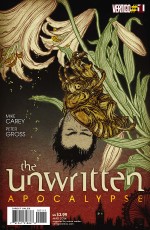 That leaves Unwritten: Apocalypse, a relaunch of that Vertigo title, and a beginning of its final arc. Carey and Gross have been working well together on brainy fantasy stories since Lucifer, and this is no exception: Carey gives Gross a lot of different styles to flaunt, as the main character travels through various fables and other narratives trying to get home, only to find that matters have deteriorated seriously during his absence. Old readers will be glad this is back, while new ones should be attracted by the pretty pictures and the smart, assured narrative voice. 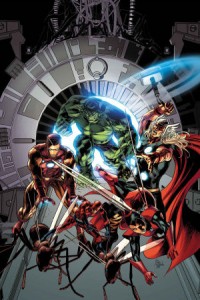 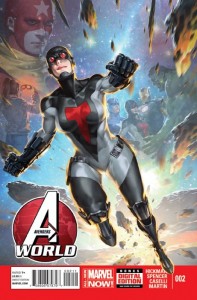 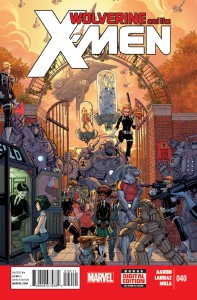 Finally, the Marvel stuff: The two Avengers both continue Jonathan Hickman’s sprawling, apocalyptic plots of the last year or two, with the main title involving yet another alternate-world funhouse-mirror version of the heroes arriving on “our” Marvel earth, while Avengers World continues the “Rise of A.I.M.” story begun in the previous issue, with lots of world-shaking events and threats (adding Spencer, who can get pretty complicated in his plots himself, to Hickman as co-writer ups the crazy-idea quotient even further). I find this all entertaining, but, as with

Forever Evil, am getting tired of juggling dozens of characters and events and alternate-dimension fates and doomsday machines in my head; some clarity, simplicity and promise of an endgame would be nice.

As for the other Marvel offerings, Wolverine and the X-Men continues to show Jason Aaron’s capacity for humor and action, as the kids at the Jane Grey School confront two young spies sent by S.H.I.E.L.D. to 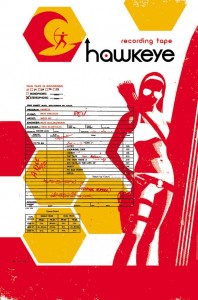 investigate them; meanwhile, Logan and Scott Summers have one of their more on-point conversations of the last few years, showing Aaron’s knack for character, too (few writers would have been able to make that dialogue sound convincing). Iron Man has a Kieron Gillen plot involving the Mandarin’s old rings being sentient, and searching for individual new hosts; it’s OK, but comparisons to his wonderful Young Avengers make it seem like a lesser book, especially because so much of the ring stuff echoes Geoff Johns Green Lantern stories from the last five years. Hawkeye also suffers a little in comparison to its own past 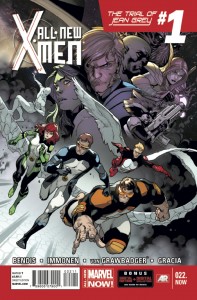 glories; it’s almost a fill-in issue (it’s issue 16, but it comes out before issue 15, because that one, with Clint and drawn by David Aja, wasn’t ready), following the “other” Hawkeye, Kate, who’s trying to work as a private eye in California. Fortunately, the plot — involving a Brian Wilson-esque songwriter in a Beach Boys-esque group — and the charming Annie Wu art make it worthwhile.

That leaves, among others, All-New X-Men, which is revving up a crossover plot with another Bendis-scribed book, Guardians of the Galaxy, involving the “young” Jean Grey being kidnaped by aliens (it’s 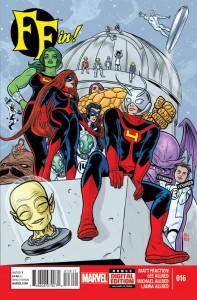 called “The Trial of Jean Grey,” so presumably she’s going to get blamed for her older self’s Dark Phoenix problems; everyone dig out their old Fantastic Fours to see how John Byrne handled this setup in the ’80s…). Speaking of Marvel’s first Silver-Age comic, FF winds to a close (its sister title, Fantastic Four, had its finale last week), with the Allred family contributing a conclusion that features Ant-Man kicking Dr. Doom’s butt (with a Marvel-pseudo-science explanation for it, involving Pym particles, that’s a clever Unified-Field theory of how super-powers work in the Marvel Universe). Somehow, the immense cast and 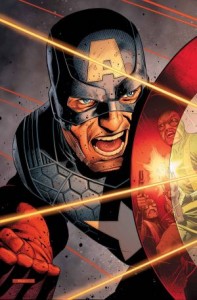 many subplots all get resolved, and the hero even gets a kiss at the end; the last few pages are the same as in last week’s FF (as the two books, once split, combine again), but since there are also 22-plus pages of original story at the regular price, readers should have no complaints. Black Widow #2 is much like the first issue, which I reviewed just two weeks ago, so there’s little to be said about it except to note that it’s a decent, stand-alone comic. Finally, Captain America #15 continues to feature nice art by Carlos Pacheco and a story that actually manages to make the villain Nuke sympathetic; it’s written by Rick Remender, too, which makes it the perfect book with which to close the circle and end this list.

With 40 years of experience in comic reading, collecting and reviewing, English Professor Phil Mateer has an encyclopedic mind for comics. Feel free to ask Phil about storylines, characters, artists or for that matter, any comic book trivia. He will post your questions and answers on the AABC blog. His knowledge is unparalleled! He is also our warehouse manager, so if you are looking for that hard to find comic book, ask Phil!
View all posts by Phil →
This entry was posted in New Comics, Reviews and tagged All-new X-men, Avengers, Bad Dog, Batman, Black Widow, Captain America, Dark Horse Presents, Deadly Class, Elfquest, FF, Hawkeye, Iron Man, Justice League, Mind Mgmt, Pretty Deadly, Unwritten, Wolverine. Bookmark the permalink.