Let’s start with the Marvel output this week, since there are a couple of new first issues: 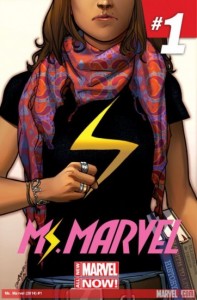 This one’s gotten some press coverage, since the title character, Kamala, is a 16-year-old daughter of Pakistani immigrants, and a Muslim. Wilson does a good job of making her a normal kid; she hangs out at the Marvel equivalent of a Circle K with a couple of friends before school, writes Avengers fanfic, fights with her parents about wanting to go to parties with boys, sneaks out to do it, and then a big fog rolls in from Manhattan and, whoop, it’s that Inhumanity terrigen stuff, and before you know it she’s in a cocoon (her family apparently having a little Inhuman DNA in there somewhere) and comes out dressed like the Carol Danvers Ms. Marvel. End of first issue. I think they might have missed a bet by not having her actually do anything superhero-y in this initial episode, and writing too much for the trade (the title page says “part one of five”); I don’t know that new readers who might pick up just this issue will be intrigued enough to look for the next one. However, Alphona’s art is attractive and appealing; he’s best known for Runaways, so he’s good at drawing kids, and he straddles the line between caricature and realistic well (see the portrayal of Kamala’s father). That helps, and so does the way Wilson seems to be reaching for an early-Spidey nerdy-teen-faced-with-powers-and-responsibilities tone; I’m a sucker for that, so I’ll be sticking around to see what happens next. 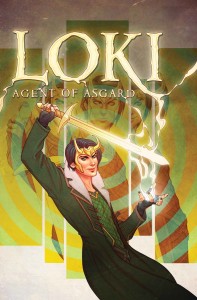 Loki’s a hot character right now, and this continues the Kieron Gillen version, a late teen/early 20’s trickster who’s conflicted about whether to do the right thing or the wrong one, but more often than not sides with the good guys. This issue plays with that dichotomy nicely, as Loki carries out a mission for the rulers of Asgard that involves his brother Thor and the Avengers, who of course remember the Evil (with a capital E) version of the character from way back in Avengers #1, and react accordingly. Ewing does a good job with all of this, and Garbett proves adept at drawing both the Kirbyesque Loki of the flashbacks, and the Jamie McKelviesque younger version of the current continuity; it’s a well-crafted continuation of the Gillen/McKelvie run, marred only by a twist at the end that, if they aren’t careful, could screw up the nuanced, cool version of the character that three years of development have produced. 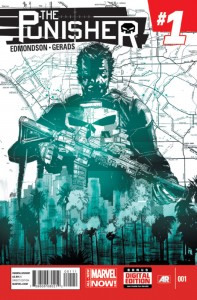 As Punisher books go, this one’s OK — Gerads is in a Goran Parlov mode with the art (gritty, grizzled and stripped-down, although he doesn’t have Parlov’s knack for caricature or smooth panel flow yet), and Edmundson offers a suitably grim and violent take on the character; I’m a little bothered that he has, say, a lady-cop acquaintance at the diner where he hangs out who has no idea who he is, even though he goes by “Frank,” gives her advice about how to wear her shoulder holster, and is, one would assume, on half the “Wanted” posters in the city, but, hey, it’s only the first issue, and maybe that will pay off later. Meanwhile, if you buy Punisher to see Frank dispatch various lowlifes in imaginative ways (and, really, why else would you?), here you are. 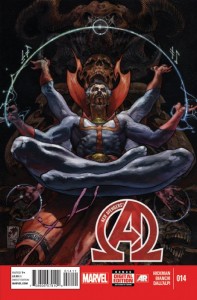 This is what, by now, is a typical Hickman issue: one puzzle piece of his sprawling, multidimensional, multi-book Avengers story that’s been building for over a year now: there’s the usual alternate-Earth playing around, but the focus is on Dr. Strange and his quest for a major power-up, bought at very great cost (although I see a possible out here… isn’t he still sort-of possessed by that Thanos sidekick? Or did that get resolved in Infinity? So many comics… so many pieces… I’m not sure that good comics are supposed to make your head hurt like this, but somehow it’s all hard to resist…). 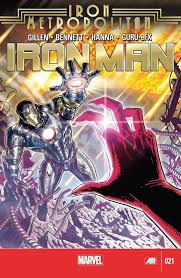 This is another book that’s involved in a big epic story, involving Stark’s long-lost brother Arno and the rings of the now-dead Mandarin possessing other people (this is part 4 of 5; the next story is actually called “Rings of the Mandarin,” though, so that’s another 5 or 6 stories left… geez, is anyone other than Black Widow doing smooth, one-issue, no-longterm-committment comics any more?).  It’s action-packed enough, although at one point, a ring looking for a host finds someone and says “You possess the necessary will” — am I the only one who thinks that’s a little too on-the-nose versus a certain other company’s Emerald Crusader? At least give us a nod and a wink to let us know you know, guys.

Next up: the indy books, especially Image: 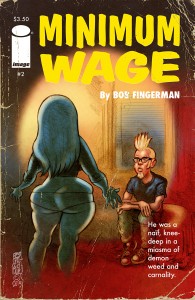 I’ve been liking this relaunch of Fingerman’s ’90s book a lot — his art was always  a unique mixture of gritty underground influences, great figure work (his scruffy, massive cast of New York City types is practically a tutorial on caricature), and an inking style that rounds out all the rough edges and makes it really attractive (other cartoonists like him, too — when you have Brandon Graham providing pinups for your book, you know you’re doing something right). His writing is also good — his main character’s R-rated adventures in the big-city dating scene ring true, and hopefully will provoke enough reader interest to keep this book on the stands for a long run. 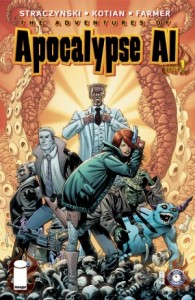 This has some usual JMS tics — a first-person noirish narrative by a lone-wolf protagonist who’s involved with occult forces — but it’s leavened by the character being a female, and by a tone that’s more comedic than serious (pretentious JMS equals bad; self-aware humorous JMS equals, usually, good). Kotian’s art is very solid, too — he can handle horror and sexy equally well, and vary his style as the script requires — and the coloring, by Bill Farmer, knows when to be bright and poppy, and when to fade into the background; this is an attractive package, and, now that Ben Templesmith is no longer drawing Ten Grand, probably the best book in Straczynski’s “Joe’s Comics” sub-label at Image right now. 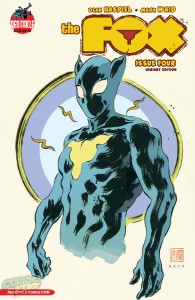 Not too much to say about this that I haven’t already — although I realized this issue that one of the reasons I like it is the touch of Michael Allred’s Madman to the character — they’re both non-powered acrobat-types with full-bodied costumes, and their adventures have a surreal, anything-goes tone (the plot here, about an alien-world princess recruiting the hero to rescue her husband from an evil wizard — wouldn’t have been out of place in a Madman book, either).  That costume, expressive and lithe, makes this an artist’s dream, too — you can tell why Haspiel was attracted to it, and the parade of creators who’ve provided alternate covers, from Paul Pope to this issue’s David Mack, shows what a magnet for pencillers it is. Fun, crackling with energy, well-drawn, sometimes serious but refusing to take itself too seriously — this is a book that’s hard to pass up.

News came this week that Ennis’s first big splashy comic, the ’90s-era Preacher, has been given a green light by AMC, with Seth Rogen set to produce. Rover Red Charlie, about three dogs trying to survive after a Crossed-like apocalypse,  is on a much more minor scale, although it showcases some of his obsessions — people gone badly crazy, the power of friendship, characters from the United Kingdom (the book’s set in the US, but one of the dogs has, of all things, a British accent), at least one character with a stubborn insistence on honor and doing the right thing,  and a very dark sense of humor that helps to support at least one OMFG gross-out moment each issue (you’ll certainly know this one’s when you see it). It’s OK, but if you have the money, and have never read Preacher, buy the first trade of that, too; get there before everyone else wants in on it.

Now the DC stuff, all of which involve Batman (make of that what you will…): 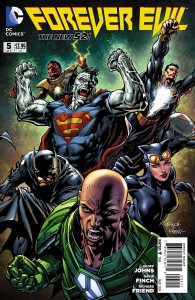 Batman and Catwoman hook up with Luthor and his ragtag crew of anti-Crime Syndicate super-villains, while Power Ring needs someone to lend him a hand, and something very bad crosses the dimensions. By now, you’re either buying this book or you’re not; it’s not bad, but it feels like it’s stuck around well past its expiration date: those last two issues can’t come fast enough. 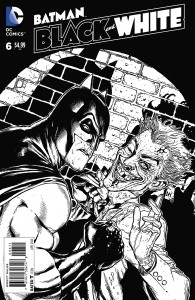 This is the last of the series, and, as with most anthologies, the table of contents is what you need: just like the title advertises, there are five all-black-and-white stories here, by Adam Hughes; Olly Moss and Becky Cloonan; Cliff Chiang; Dave Taylor; and Dave Johnson. They’re only eight pages each, but that stripped-down, non-colored art is so pretty to look at that you won’t care. 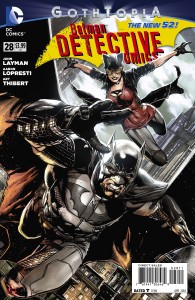 Layman has to deal with the “Gothtopia” crossover, wherein the Scarecrow has crafted a kind of reverse-fear-gas that’s making everyone in Gotham lost in a fantasyland where it’s actually a well-run, safe city; meanwhile, Batman’s in Arkham, dodging the inmates and looking for Poison Ivy to help him whip up an antidote. It helps that this is a story chapter that actually moves the story along, and ends on a suitable cliffhanger (meaning that, if you’re reading the other Bat-books, this one’s essential); it also helps that Lopresti/Thibert do a decent Scarecrow and Ivy, and get to let loose on a couple of hallucinatory panels, so that the book looks pretty good, too. 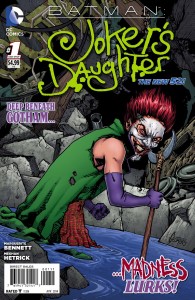 This is better than the 3-D one-shot with this character, although it still suffers from its attempts to make a non-powered, reasonably small girl into a scary psychopath. This one at least moves the Joker’s-rotting-face bit forward a little, and makes the character’s motivations and plans a little more solid and credible (I know that “credible” isn’t the same in a world with aliens from Krypton and orphans who dress up in bat-suits, but still…).

With 40 years of experience in comic reading, collecting and reviewing, English Professor Phil Mateer has an encyclopedic mind for comics. Feel free to ask Phil about storylines, characters, artists or for that matter, any comic book trivia. He will post your questions and answers on the AABC blog. His knowledge is unparalleled! He is also our warehouse manager, so if you are looking for that hard to find comic book, ask Phil!
View all posts by Phil →
This entry was posted in New Comics, Reviews and tagged Apocalypse Al, Avengers, Batman, Forever Evil, Iron Man, Joker's Daughter, Loki, Minimum Wage, Ms. Marvel, Punisher, Rover Red Charlie, The Fox. Bookmark the permalink.