The Latest and (Mostly) Greatest #78 by Dan!

Surprise attack! I’m back! That’s right, after last week’s insanity of goodness, I’m back for more! Let’s do this! 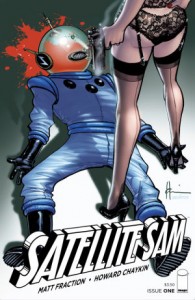 So. Fraction clearly wrote this book specifically to get Chaykin to draw it right? You’ve got the old-timey 50s style mixed with pin-ups and sci-fi that isn’t quite sci-fi. It might as well be called “Matt Fraction Presents: Something I Wanted Howard Chaykin to Draw.” This beginning overall is a pretty sweet comic. Satellite Sam is a live sci-fi TV show in New York, but the star is conspicuously absent, so his son has to do a fill-in. It turns out the star of the show is dead, but he had some pin-up related secrets that create a mystery. Fraction sets all the pieces in place, and it’s incredibly pretty to look at. A solid first issue to a mini that may become an ongoing series. 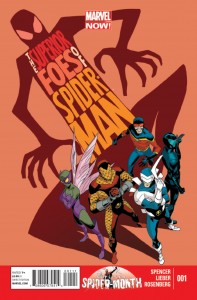 This is a bizarre little book. So Boomerang is in prison and trying to find his way out, and he’s buddies with Shocker and Speed Demon, and gets them to join forces with him to become the new Sinister Six? It’s clearly a comedy book, and the jokes are all hit or miss. Don’t get me wrong, it’s a fun little book, but I don’t expect it to really last that long cause I just don’t see where the market is for this kind of book. It’s all D-List villians from Spider-Man teaming up to probably do nothing of importance. I could be wrong, but I seriously doubt it. 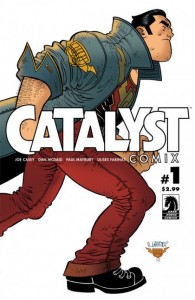 I’m slowly becoming obsessed with Joe Casey. I’m buying all his stuff without even thinking about it. This book is no exception. As he explains in the back, Casey is taking some older Dark Horse heroes and revamping them for this era. The first issue reads very much like that book series “Wild Cards,” in that it sets up an event and several different characters reacting. Worth noting is the $2.99 price tag for what is a normally higher priced anthology style. Casey says he’s going to switch around the main story, but this time it’s “The Ballad of Frank Wells” and it is awesome. I could read Casey writing about superheros fighting giant crazy things all day, and I look forward to the next issue.

This is still the weirdest “New 52” book because it completely stays away from the New 52 universe as a whole. Morrison has built this story for five+ years and no “line-wide revamp” is going to stop him! This issue sees Batman getting his revenge on the monster that killed Damian, and, as has become traditional, not everything is as it seems and things get incredibly dark. Burnham has shown that he is more than capable of killing it with a Morrison script, and he continues to draw the hell out of this book. There’s only one issue left until the series concludes, then there will be a Batman Inc. sized hole in my heart for a while. 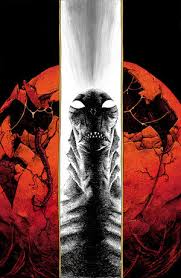 Abe Sapien #4 Writers: Mike Mignola & John Arcudi Artist: Max Fiumara: This series is just a lot of dark fun with a lot of potential to go places. Who’da thunk Abe Sapien could hold his own series? 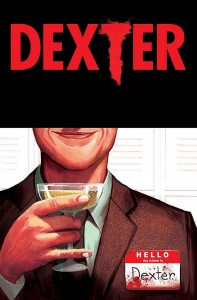 Dexter #1 Writer: Jeff Lindsay Artist: Dalibor Talajic: From the writer of the books, so it’s more in the style of the books than the TV series, this first issue is about everyone’s favorite serial killer with soul, and it’s pretty good. Well-drawn and well-crafted, we’ll see how it goes from here.

Thunderbolts 12 Writer: Charles Soule Artist: Steve Dillon: A fill-in writer wraps up a piece of the story. This is a glorified Punisher issue, but it sets some things up for the future and I liked it.

Guardians of the Galaxy Tomorrow’s Avengers Writer: Brian Michael Bendis Artist: Various: Bendis is just all over the Guardians now, isn’t he? This is kinda lame and confusing and for five bucks, I don’t think it’s worth it.

Trinity of Sin: Pandora #1 Writer: Ray Fawkes Artists: Various: It took four people to draw this book and it shows. It’s setting up some future stuff for the Justice League, but it’s just mediocre and feels kinda pointless.

Ten Grand #3 Writer: J. Michael Straczynski Artist: Ben Templesmith: I would write more about this, but Straczynski writes plenty. It’s a fine expository issue, but that’s an excuse for Straz to write a novel. Meh.

47 Ronin #5 Writer: Mike Richardson Artist: Stan Sakai: This book is a lot of fun that tells a history that’s often ignored in American culture. It comes to its logical conclusion and will be worth rereading as a trade.

And that’s the week! I’ll see you guys in a while, for next week the Professor returns!

This entry was posted in Reviews and tagged Avengers, Batman, Deadpool, Guardians of the Galaxy, Superior Spider-Man, Thunderbolts. Bookmark the permalink.