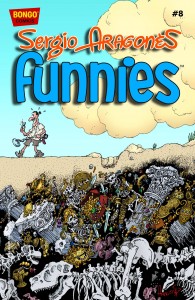 Sergio Aragones Funnies #8 — Creator: See if you can figure it out….

Aragones had back problems and needed surgery a couple of months ago, so it’s been a while since an issue of this comic came out. This new one is a treat — there’s the usual mix of finely-detailed, just-perfect drawings: a one-page intro talking about the hospital stay, a couple of one-page gags, a couple of intricate puzzle pages, an eight-page western (people forget that Aragones created and wrote DC’s Bat Lash, and knows his way around the history of the Old West; this tale starts out about bank robbers, and morphs into a parable about the modern banking industry that wouldn’t be out of place in an Occupy demonstrator’s backpack), and, best of all, a ten-page reminiscence about how Sergio hosted the Mad magazine creators’ annual foreign field trip the year they went to Mexico. I don’t see how anyone could not like this comic; it’s by a master of the form, and easily earns its position as best book of the week. 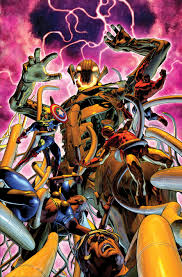 The conclusion of this year’s Marvel summer event, and kind of anticlimactic: in the first part, Wolverine and Sue Richards’s time-travel fix succeeds in avoiding the title Age and letting the heroes defeat the bad-robot antagonist fairly quickly, but also is apparently one spacetime manipulation too many, and causes a big cosmic hiccup, a universal rupture that brings denizens of some other realities into the “real” Marvel one, and sends some of its habitants (like, say Galactus) to… other, but familiar, places. It looks like this will give the Marvel creators and editors a convenient continuity-changing excuse similar to the “Superboy punched the universe” one DC used after its Infinite Crisis series; the last part of the issue is a big trailer for the various new titles and events that will spin out of the events here. How you feel about all of that will depend on how excited the new wrinkles look to you — but, at least, points to Marvel for realizing that readers shouldn’t have to pay extra for the promo stuff; we get 34 pages of story for their regular $3.99 price. Points off for making this issue more of a “what’s going to happen next?” than a neat conclusion to the series, but Bendis did do some clever things with the alternate timelines and apocalyptic events throughout the overall story, and the various guest artists do deliver some good visuals here, so readers should feel like they got their money’s worth.

Brooks, the author of the World War Z novel that inspired this week’s Brad Pitt movie vehicle, continues the zombie theme, but adds a new twist: the woman who’s the narrator here is a vampire, and describes her first encounters with a walking-dead epidemic. Brooks, as befits an actual novelist, has a smooth linguistic style and is good at establishing a detached, amused voice for his protagonist (the zombies just ignore her, since she isn’t actually “alive,” so they’re no threat to her) and Caceres is good at delivering the typically-detailed, horrific large-screen panels of mass destruction that are a signature of so many Avatar titles. The issue hints at what I assume will be the vampire’s big realization in the second installment: that, while the zombies aren’t an immediate danger to them, a zombie apocalypse will eventually dry up the food supply of humans the bloodsuckers need to survive. Cool premise, if you’re a horror fan, and enough to bring me back for more next time. 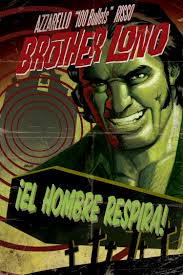 Azzarello and Risso reteam for a sequel of sorts to their popular Vertigo series, following one of its characters as he travels on a mission to Mexico, and encounters the same extreme-noir milieu that the original title created so well: lots of vicious criminals, sexy women, flawed heroes and desperate lowlifes all caught in a shadowy-but-sharply-rendered world where life is cheap but redemption costs dearly. Making this only eight issues is wise — the original 100 Bullets lagged in parts, because its conceit of lasting exactly 100 issues added too much filler, but two-thirds of a year is just about the right length to live in Azzarelo and Risso’s seedy, fascinating universe. 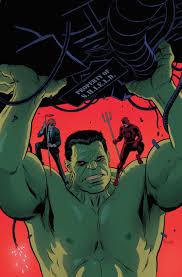 This is worth noting because it’s the first of a two-parter guest-starring Waid’s other steady hero gig: Daredevil, who turns out to be Bruce Banner’s lawyer. The two end up in a SHIELD mission involving European gunrunners dealing in super-weaponry, during which one of the bad guys gets away and ends up offering the weapon to an even bigger bad guy, thus setting up part two next month. Waid, as always, offers pitch-perfect characterization and clever plotting, and he and Scalera work well together on the visuals (one page where Murdock and Banner, as their alter egos, enter an underworld bar is a good example: five equal horizontal panels, dividing the time sequence and the action into five exact, effective beats); this doesn’t hit the storytelling heights and pleasures that DD often does, but it’s very solid superhero storytelling.

Same song as always with these two Hickman offerings: they’re complicated, with subplots and sub-subplots colliding and combining into baroque patterns; pity the reader who picks up one of these issues cold, and has to figure out all the characters and events from scratch. On the other hand, it’s not all chaos: Hickman is careful to 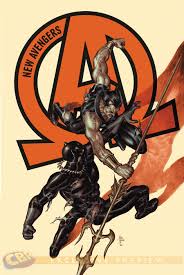 start each issue with a “previously…” page, and throw in interesting, graspable hooks for new readers too (in New Avengers, for example, there’s the conflict between Namor’s Atlantis and the Black Panther’s Wakanda, as they lurch toward all-out war); plus, he obviously has a master plan, and the anticipation of watching everything coalesce into a grand design is what keeps readers coming back for more. Hope for a big payoff from each title — or, more likely, the two together — soon, though; no one’s patience lasts forever. 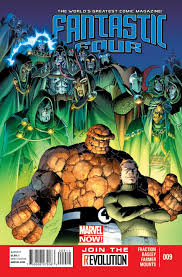 Fraction’s got a year-long arc percolating in this title (and its sister book, FF) too, but he’s a lot more diligent about making each issue a satisfying, self-contained story; last issue’s Ben Grimm visiting the Yancy Street of the 1930s was a good example, and this issue’s focus on the origin of Dr. Doom, and just what happened on the college campus where Doom, Grimm and Reed Richards all met, makes for fascinating reading (the conceits of all the time-travelling witnesses to the event, and the young Doom’s reactions to them, feel exactly right, and make the story particularly fun for longtime fans).

As always, the individual parts of this anthology determine whether readers will buy it: the Baron/Rude Nexus chapter continues to be the prime attraction, but there’s a new Buffy story, a Matt Fraction (him again…) stand-alone with Christian Ward art, an Andrew Vachss adaptation, chapters in the Bloodhound, Crime Does Not Pay, King’s Road, Trekker and Blackout serials, and a few other goodies, too. Your mileage may vary, but there’s more than enough here to be worth a look, at least.

Edgar Allan Poe’s The Fall of the House of Usher #2 (of 2) — Creator: Richard Corben 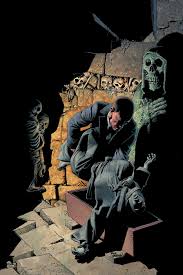 As I said after the first half of this two-parter came out: Corben on Poe should be enough for anyone; Corben’s transition from Young Gun to Old Master has been seamless (his work on Hellboy the last few years offers the most popular evidence of that). Horror doesn’t get any more classic, or more Gothic-American, than Poe, and his smooth, softly glowing airbrushing continues to be a perfect match for the horror stories he loves.

Stuff I liked enough to buy, but don’t have anything new to say about, so read reviews of previous issues in the archives if you’re interested: 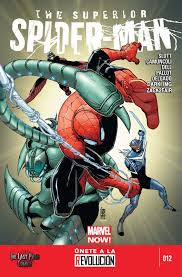 With 40 years of experience in comic reading, collecting and reviewing, English Professor Phil Mateer has an encyclopedic mind for comics. Feel free to ask Phil about storylines, characters, artists or for that matter, any comic book trivia. He will post your questions and answers on the AABC blog. His knowledge is unparalleled! He is also our warehouse manager, so if you are looking for that hard to find comic book, ask Phil!
View all posts by Phil →
This entry was posted in New Comics, Reviews and tagged Age of Ultron, Avengers, Brother Lono, Dark Horse Presents, Extinction Parade, Fantastic Four, Hulk, Richard Corben, Sergio Aragones. Bookmark the permalink.