The Latest and (Mostly) Greatest #69 by Dan!

Down to the wire this week folks! No excuses, just remember to do your taxes. Let’s do this! 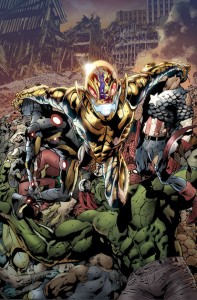 Well, this “big new event” sure starts off as a very pretty piece of mediocrity. The only person who has seen any advantage from Marvel’s recent “Ship-it-faster-than-we-can-write-it” strategy is Bendis, because his slow pace works better when read in chunks. This will (hopefully) be the case with Age of Ultron, because I have no idea what’s going on in this first issue. We’re given an alternate timeline called “Now” where Ultron has taken over everything. I will say, it’s drawn just like you’d expect Hitch to draw it, meaning it’s as epic as humanly possible, so that’s fun. But the plot is absolutely nothing, and this reads like a four-dollar foil-cover zero issue. Hooray! It’s just like the 90s!

What’s the best way to tie into the rest of the Batman books but keep your own comic independent? Only reference it in two pages, then move right along. That’s what Detective Comics has done with both “Death in the Family” and the latest developments. Layman keeps advancing his “Emperor Penguin” plot piece by piece, and it’s actually been a very enjoyable romp. The last few issues have seen Batman actually doing some detective work while he beats the crap out of the bad guys, and in this issue pieces keep moving to get the regular Penguin out of the way. It’s enjoyable stuff, and it’s not bogged down in other Bat-news. 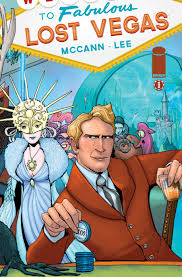 Interesting. That’s the best way to describe this book, interesting. It’s also a bit confusing. Which makes me wonder where we’re going with this book. Apparently there’s a prison planet that works as a giant Las Vegas, and the people that work there are all in trouble for one thing or another. Our “hero” is of course one of those people, trying to break out, but can he do it? The concept is surprisingly simple for an out-of-this-world adventure. The art is good because you’re actually able to distinguish which character is which (that’s hard to do than you’d think these days.), and I’m left wondering where it’s all going. An enjoyable first issue. 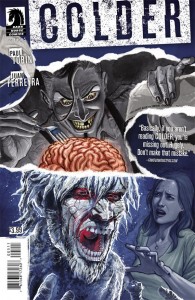 Good lord, this was one weird creepy mini-series! Stretching the logic of what “crazy” actually is, this comic feasted on screwing with your mind almost as much as Nimble Jack loves messing with our protagonist. Nimble Jack is an absolutely creepy character, heavy on the torturing and messing with minds. This series finally comes to a close with Declan actually fighting and taking out Nimble Jack, but it’s pretty clear that there’s plenty of room for a follow-up mini series. It’s hard for a comic to be genuinely creepy, but this one hits all the right notes, and I bet it will read even better in a trade. You should probably buy that trade when it comes out. I’m just sayin’… 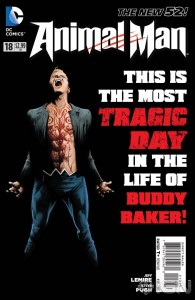 So, remember a few weeks ago when Animal Man and Swamp Thing claimed to be ending their stories? Yeah, well these latest issues are  acting as epilogues that close out the real stories. Let’s start alphabetically with Animal Man. While it’s a very good book, it also kinda throws in a shocker death for no reason, and then just says to read the funeral next issue. It’s well put together, but I’m not sure I care at this point. Swamp Thing on the other hand, wraps up Snyder’s run in a nice neat little bow. It’s a solid ending that clears some stuff up and lets the next writer be ready to do whatever they want. Both of these stories have been building to these points, and both of them are just fine. If you like the characters, this will be a faithful interpretation of them that’s worth reading. 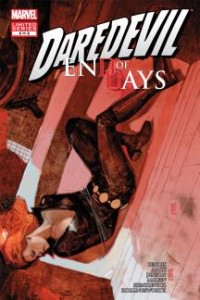 Daredevil End of Days #6 Writer: Bendis and David Mack Artist: Klaus Janson: I just want this book to end at this point. It’s gone on way too long without giving answers…and I just don’t care anymore.

Avengers #7 Writer: Jonathan Hickman Artist: Dustin Weaver: This book is good, and Weaver makes it even better. I’m still intrigued about where it’s going, and with Hickman writing, we know it’s going to be wild.

Mara #3 Writer: Brain Wood Artist: Ming Doyle: I like this more with every issue I read. It’s turning into a future girl-power volleyball superhero story, and I don’t get to say that about any other comics. 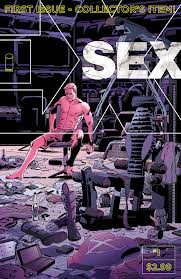 Sex #1 Writer: Joe Casey Artist: Piotr Kowalski: A risque title doesn’t fully sell me on this book, and a slow-moving first issue doesn’t help, but I look forward to seeing where this is going, and will stay invested for now.

Green Lantern #18 Writer: Geoff Johns Artists: Symon Kudranski & Ardian Syaf: With a trip inside a lantern ring, Kudranski makes this a HUGE departure from the traditional Mahnke look. It’s incredible stuff, and the oddest issue of Green Lantern I’ve seen in a while.

And that’s the week! Again, sorry about my lateness, but we now return you to your regularly scheduled programming.