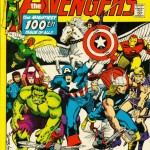 It’s Sunday folks, so it’s time for more of those reviews you love to read!  Let’s do this! Avengers #100 from 1972 It’s an anniversary issue, and they go with a one-shot story with style.  Everybody on the cover shows up and some others make appearances as well.  It’s a pretty ridiculous issue, with Roy Thomas cramming as many people and backstory and fighting in it as humanly possible.  It was a fun read, with Thomas giving all the characters a distinct voice.  Barry Windsor-Smith draws the hell out of it.  In this story, all the Avengers (current and former) … Continue reading →