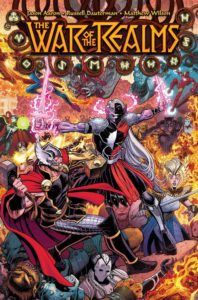 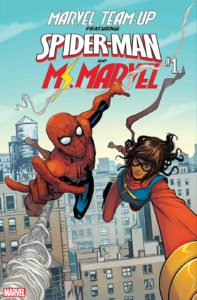 War of the Realms, involving the Norse-mythological Dark Elves, led by Malekith, invading and conquering everything — including Earth — begins this week; is it worth the $5.99 price? Well, if you read any Marvel comics, you’ll have to deal with it, because it’s one of those stories that crosses 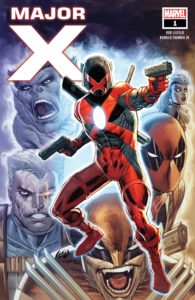 over into everything, with many of the company’s regular books, from Avengers to Squirrel Girl, reacting to it, and a handful of mini-series chronicling various aspects, too. The good news is that it’s a decent-enough story; Thor writer Jason Aaron has been building this tale for over two years, and he and artist Russell Dauterman present a well-drawn, elaborate first issue, with 30 pages of art, a couple of major Asgardian-based “deaths” (although one is of a character who’s “died” at least three times before, and another seems an obvious fake-out) and the planet being, in fact, over-run with all manner of frost giants, trolls, dragons and similar trouble-causers. Just give up and read it: at least then you’ll now what’s going on in all those other 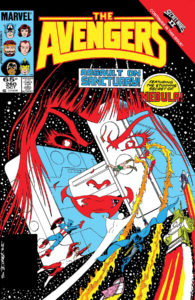 comics.  Another decent comic, though on a considerably smaller scale, is the revival of Marvel Team-Up, starring the inevitable Spider-Man along with Ms. Marvel; it’s got a clever flip-book format where we see each character go about their normal day in individual stories, drawn in a clean, attractive straight-ahead superhero style by Joey Vazquez, which then meet in the middle of the book and end there with an explosive climax and cliffhanger twist to bring readers back next issue: so far, so good.  Major X is the first of a six-issue series written and drawn by Rob Liefeld where he goes back to those early-’90s New Mutants comics where he introduced Cable, Domino, and Deadpool and drops a new 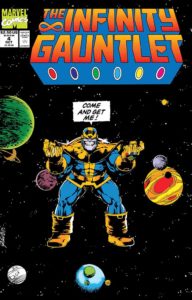 time-traveling guy in there too. It’s an excuse for him to revisit all those characters, and if you first read those books when you were 12 years old in 1991 then you’d be… 40 today, and you should buy this comic because you’ll get nostalgic and think it’s really cool;  if you were 20 or older and read it back in ’91 you’d be at least 48 today, and you should buy this so you can make fun of Rob Liefeld again (anyone younger is going to be kind of puzzled why anyone would care, but remember that, less than a year later, this guy’s Youngblood #1 would become the first Image comic, and sell over a million copies…).  Marvel’s dollar-bargain “True Believers” reprints 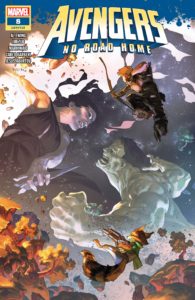 for April all involve the Avengers and/or Thanos (there’s apparently some sort of movie coming out…?), with this week’s Nebula offering Avengers #260’s first appearance of that bad guy’s daughter, while Thanos reprints Infinity Gauntlet #4, which drops you smack in the middle of that iconic mid-’80s series, and would be worth it for that cover alone.  The current Avengers should be wrapping up its ten-issue “No Road Home” weekly super-story in two weeks, right in time for that movie; its use of the Hulk, Hawkeye, Rocket Raccoon, the Scarlet Witch and even Conan should all make it familiar to Marvel film fans, and the fast-moving story and 200-page length should make it a cool gift. 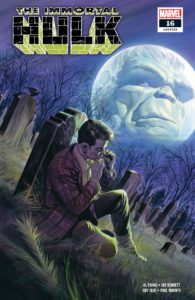 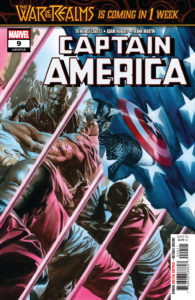 Immortal Hulk is shaping up to be a slick queasy/chilling modern-horror run on that character, going off in unexpected directions while resurrecting old elements (the Hulk comes out at night, and is very Hydish) and characters (Rick Jones, in this arc, plus a last-page reference/return that can be explained (spoilers) here). Al Ewing and Joe Bennett have made it this year’s Monstress, or Saga, with an increasingly-rabid fan base and a back-issue scarcity to drive readers to the trade collections; this 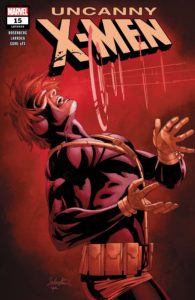 week’s issue showcases their strengths, and offers a good chance to see what the buzz is about. Meanwhile, Captain America is in the middle of a Cap-in-prison story, with Steve Rogers framed for murder and in a max-securiity, Baron-Zemo-run supervillain lockup; Ta-Nehisi Coates mixes in plenty of twisty intrigue and action to go with the pointedly-political themes of what happens when you let Nazis, or their sympathizers, run your government, and Adam Kubert makes it look suitably heroic.  Uncanny X-Men continues its arc about Cyclops and Wolverine, with most of the rest of the X-Men presumed dead, gathering a team to fight for mutant justice; it’s readable and offers a major life change for Scott 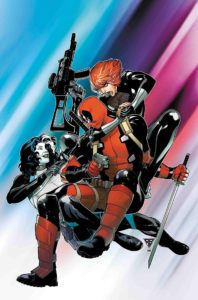 Summers, one that makes his costumed name ironically appropriate — and, like Adam Kubert, Salvador Larroca has good-looking super-action realism down perfectly.  Domino: Hotshots teams up that title mercenary, and her gal pals, with the Black Widow and another international super-spy, the White Fox — with Deadpool thrown into the mix; the scenes with him and Domino show just why Gail Simone is such an insightful, character-focused writer, and David Baldeon’s mangafied art is pretty and super-slick; this is really just an extension of Domino’s previous book, and if you liked that (and you should have) you’ll like this too.  Amazing Spiderman #18.HU is an “extra” issue of that title, part of 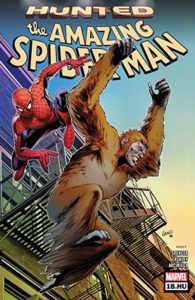 its current “Hunted” saga involving Kraven the Hunter and Arcade teaming to let rich people put on VR headsets and go on safari for, not only our hero Peter Parker, but a bunch of animal-themed villains like the Rhino, the Vulture, etc.  It focuses on the Gibbon, a C-lister at best… but, then, those often lead to the most interesting, and poignant, stories;  this one’s not half bad, especially, if you appreciate its detailed knowledge of continuity and affection for the seedier parts of the Marvel universe.  Cosmic Ghost Rider Destroys Marvel History has a very basic plot — Frank Castle, the former Punisher and now future CGR, goes back to his past to prevent that 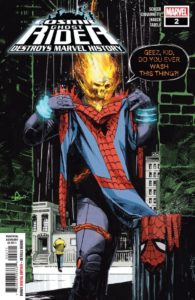 Central Park shootout that destroyed his family; while waiting for the day it happens, he visits his old house, passes himself off as a relative, and tells his kid stories about how he was around for major chunks of Marvel history. This issue revolves around Spider-Man, from his beginnings through the Clone Saga and beyond; it’s another tale that works well if you actually know all that continuity, and if you appreciate its tongue-in-cheek rewrites (if you’ve liked similar stories involving Deadpool — who could have taken over from CGR here without missing a beat — then you’re its target reader). 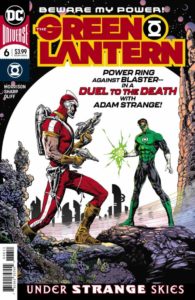 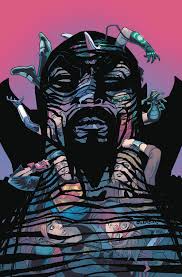 The DC and smaller-press comics of note are being 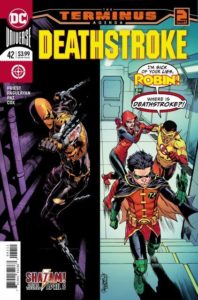 combined here, because, frankly, there just wasn’t that much from those sources to catch my eye. Green Lantern by Grant Morrison and Liam Sharp stands out: in this week’s issue #6, there’s an explosive resolution to the current arc, and an immediate start to the next: one that shows that Morrison can dive just as deeply into GL continuity as he used to do with Batman’s; it’s complicated and weird and heroic and wonderful as always, and Sharp just absolutely nails the last-page reveal.  Young Justice continues to be Brian Michael Bendis’s tribute to the title’s late-’90s Peter David/Todd Nauck run (which began, astonishingly, over 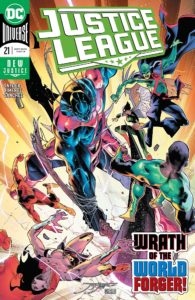 20 years ago), with a reunion of the four original cast members (the Tim Drake Robin, Conner Kent Superboy, Wonder Girl and Impulse), amid a dimension-spanning plot courtesy of Amethyst, Princess of Gemworld, and with a teen Green Lantern and a girl descended from Jonah Hex in there, too; new fans will find it typically-brisk and interesting Bendis, but older ones who remember the original fondly will love it, particularly the Superboy/Impulse scenes. Deathstroke involves that other young group led by a Robin:  the Teen Titans, led by Batman’s son Damian Wayne, who’s captured Slade Wilson to put in his secret bad-guy jail, with predictably-poor results; it’s the second of a four-part crossover between 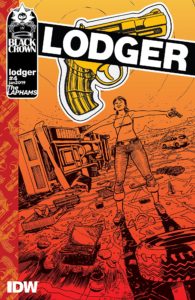 those two titles.  Justice League continues its big-concept multiverse-shattering shenanigans, as the team navigates the sixth dimension looking for an answer to their current crises, dealing with a very powerful future-timeline Superman, an insane Mr. Mxyzptlyk, a new player who turns out to be a familiar face, and similar threads: I think it’s all going to make a great series of trade collections, but boy, is it hard to keep all those plotlines straight from issue to issue, especially when they’re all still in the air, unresolved, at once. Speaking of reader confusion, Lodger, by David and Maria Lapham, is on its fourth issue, and not exactly taking pity on readers either; if you remember Lapham’s Vertigo series Young Liars (also edited by his 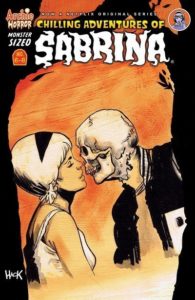 current editor, Shelly Bond), it did much the same thing, spinning off wilder and wilder sf ideas until it collapsed on itself — but it was sure well-drawn and fascinating while it lasted, a Twin Peaks for comics, and by a similar holistically-directing auteur. That leaves Chilling Adventures of Sabrina, which is a reprint of the last three issues (#6-8) of that more-adult reimagining of the teen witch, written by Roberto Aguirre-Sacasa right before he ended up as the heart and soul behind the TV Riverdale; it should be catnip to fans of that show, or especially the new Sabrina, with Robert Hack’s dreamlike painted art rendering it suitably Gothic and, as it says right there in the title, chilling.

With 40 years of experience in comic reading, collecting and reviewing, English Professor Phil Mateer has an encyclopedic mind for comics. Feel free to ask Phil about storylines, characters, artists or for that matter, any comic book trivia. He will post your questions and answers on the AABC blog. His knowledge is unparalleled! He is also our warehouse manager, so if you are looking for that hard to find comic book, ask Phil!
View all posts by Phil →
This entry was posted in New Comics, Reviews and tagged Avengers, Captain America, Cosmic Ghost Rider, Domino, Green Lantern, Hulk, Justice League, lodger, Major X, Marvel Team-UP, Sabrina, Thanos, Thor, War of the Realms, X-men, Young Justice. Bookmark the permalink.