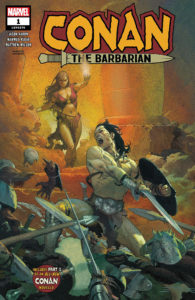 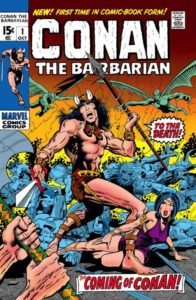 Lots of first issues this week, as the comics world gets back to business in the new year. Conan the Barbarian #1 is a return of that franchise to Marvel after its long tenure there 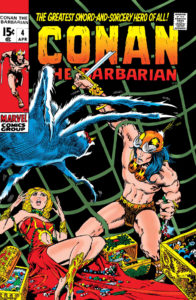 from the ’70s to the ’90s.  It’s not groundbreaking (what take on that grizzled pulp hero would be, and why?), but Jason Aaron has a feel for the genre (the Hyborean Age and Asgard aren’t that different, and Aaron’s spent a number of years on Thor), and Mahmud Asrar (lots of mutant titles, most recently X-Men: Red) has a gritty, detailed and shadowy style that works well with the Cimmerian and his various dives, battlefields and occult encounters;  if you’ve liked Conan’s adventures in the past, you should like this just fine, too. Marvel’s also releasing a number of those $1 “True Believer” reprints involving the

barbarian this month; this week, naturally, they begin with the beginning: the Roy Thomas/Barry Smith Conan the Barbarian #1 from 1972, followed by issue #4’s adaptation of Robert E. Howard’s “Tower of the Elephant.” The fascination here is with how much Smith’s art improves in just those few months; that first issue looks like a talented beginner, while “Tower” shows more than a glimmer of the elaborate pre-Raphaelite style that was to become his trademark, and make Conan one of the breakout comics of the early ’70s. Champions #1 is, of course, just another relaunch of that title; with the critical 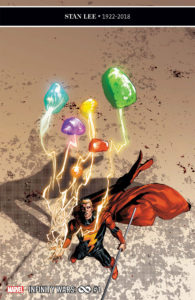 and commercial success of the Spider-Man: Into the Spider-Verse cartoon, it’s no surprise that Miles Morales is featured most prominently on the cover. Writer Jim Zub and artist Steve Cummings collaborated previously on the Image comic Wayward, so they make a smooth team, with all the characters looking and sounding right, and the obligatory last-page cliffhanger villain reveal designed to draw readers back for the next issue; the result is a professional, entertaining, above-average comic.  The same can be said for Infinity Wars: Infinity #1, a coda to that just-concluded mini-series, and a bridge to a new Infinity Watch series starring… well, that would be a spoiler, so get the comic and read its last page to see.  Gerry Duggan and Mark

Bagley are both solid pros (Bagley, especially, who’s been around since the ’90s, and had a record-setting run on Ultimate Spider-Man with Brian Bendis), and this set-up involving Warlock giving the Infinity Stones sentience, and sending them off to hook up with hosts, does a good job of tying up loose plot threads and weaving new ones.  Wolverine: The Long Night begins a five-issue adaptation of Marvel’s podcast starring the ol’ Canucklehead, from last year; it begins with an X-Files-type pair of investigators looking into a series of mutilation murders in Alaska. Marcio Takara does a good job with both characters and setting — look at that first page, which is just a nine-panel grid of one guy talking, and yet holds the reader’s interest — and has a gloomy, inky style that works well with the story’s Land of the 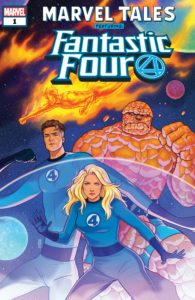 Midnight Sun-set violence and horror.  Marvel Tales: Fantastic Four features a trio of FF reprints: the return of the Sub-Mariner, from 1962’s issue #4; a battle with Annihilus in the Negative Zone and the birth of Franklin Richards, from 1968’s FF Annual #6, and a John Byrne written-and-drawn single-issue story from 1982’s issue #245. The first tale is one of the most important historically, the second is a double-sized one showing Stan and Jack at the peak of their abilities, and the third shows why Byrne had such a long and critically-acclaimed tenure with Marvel’s original flagship title: for $7.99, that’s a lot of absorbing reading, and a good start to the new year. 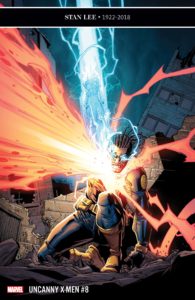 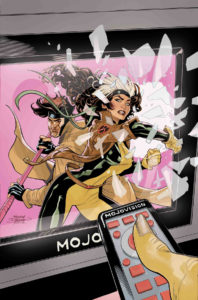 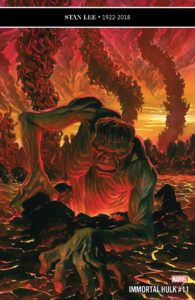 an alternate timeline, which all the X-books then lived in for the next four months, complete with alternate-timeline titles and character versions? Marvel’s got something similar planned for 2019, as an “Age of X-Man” is created by the ultra-powerful Nate Gray. Uncanny X-Men and its next two issues offer the setup for that, plus the return of two core members after a couple of years away.  Uncanny‘s current writing team — Rosenberg, Thompson and Brisson — is all promising up-and-comers; for proof, check out Kelly Thompson’s solo

mutant book, Mr. and Mrs. X, a suave, stylish Thin Man-esque valentine with the Rogue/Gambit relationship at its heart.  Come for the media satire via villain Mojo; stay to appreciate Oscar Bazaldua’s confident, attractive art.  Immortal Hulk‘s Joe Bennett has been creating good art, too, but where Bazuldua offers bright romance Bennett (and writer Al Ewing) traffic in horror, with hellscapes and nightmarish body transformations and dark psychological debates; it’s a great take on one of Marvel’s longest-running characters.

Runaways brings us back to bright romantic/adventure territory, with Rainbow Rowell and Kris Anka hitting a lot of YA-reader sweet spots; Rowell, like Thompson, has the rare knack of captivating, not only those readers, but the rest of us, too. Winter Soldier is spy-thriller/dark-ops intrigue, as the former Cap-sidekick-turned-Russian-assassin-turned-hero fights the lingering influence of terrorist organization Hydra and takes on a partner; if

you’re a fan of, say, the Punisher, you’ll like its soldier-of-fortune sensibilities. The current Iron Man imagines a Stark-created World of Warcraft VR environment that, of course, goes spectacularly wrong, thanks to the Controller; there are a number of subtle digs at trollish online behavior in the Comicsgate era. This book hasn’t gelled for Slott in the immediate way that Fantastic Four has; he and Valerio Schiti haven’t quite found the handle, but keep getting tantalizingly close — and the next installment/arc’s title, “Digital Demon in a Bottle,” suggests that it might be their breakthrough. 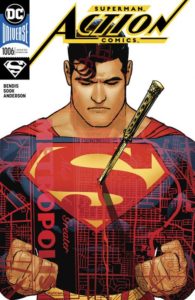 Of the two Brian Bendis Superman comics, Action has been more the street-level Metropolis one, while Superman covers the widescreen planet-shaking events; the best part of each Action issue has been the first page, showing Clark Kent’s 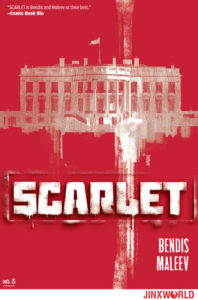 office computer screen with all manner of Post-It notes and other Easter-egg clues and sly comments for DC continuity fans.  This week’s installment ends the first arc, setting up a wider threat for the next episodes; it also confirms that Bendis gets the Man of Steel’s Boy-Scout philosophy as, not a weakness to be made fun of or exploited by bad guys, but his fundamental strength: and Ryan Sook’s a good enough artist to be able to communicate that with simple, calm-but-firm facial expressions and body language.  Scarlett, one of Bendis’s creator-owned books, ends its first arc too (one that’s spanned a couple of years, and two different publishers), with its heroine discovering just how far her

stubborn, instinctive resistance to corruption has taken her; although naturally it stacks the deck in her favor, its easy-to-root-for lead, thoughtful (and ripped from the headlines) political themes, and especially its subtle, beautiful Alex Maleev art all make it work.  Heroes in Crisis  continues its murder mystery built around a secret haven for powered people with PTSD (formally secret, after this issue); as with a lot of Tom King’s work, its big concepts combine with its small human moments to good effect, with enough memorable bits (Batgirl and her scars; Blue Beetle; Black Canary) to keep everyone reading, while Clay Mann’s art nails the many talking-head sequences just as well as the occasional action ones. 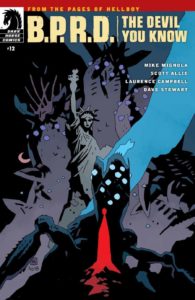 Since the Rick and Morty comic by now has published over a dozen more issues than the actual cartoon, it often calls back to earlier stories; this one revisits R&M’s original

dimension, the one where, thanks to a Rick mistake, most of the Earth got turned into mutated Cronenbergian monsters (the reference is to gross-out cult horror-movie director David Cronenberg; Google it, and start with Scanners and The Fly if you want to increase your geek cultural literacy…). Like the show itself, it can be surprisingly affecting, and between a gathering of Evil Ricks, Morty’s original now-Conan-like family, and a major end-game sacrifice, this delivers a good story.  B.P.R.D. has Hellboy back, and only a couple of issues left; worldwide apocalypse has been looming — and actually happening —

in this book for a while, but now the original crew — Abe Sapiens, Liz and Hellboy — are reunited and moving to confront it. If you’ve enjoyed the Mignolaverse titles at any point in the last few decades (while it’s been presented as a sequence of mini-series, this book’s actually on issue #159), check in on these last few episodes to see where it lands.  Archie Publishing continues to try new stuff:  Archie: 1941 imagines the gang graduating high school in the title year (the first year their adventures were published), with Archie and Reggie in the Army; while the cover looks like they’re in D-Day, it’s actually the North African US invasion 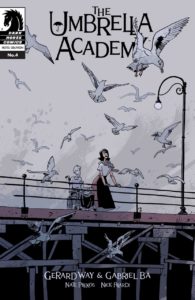 from late ’42, so the outcome of the war — and the characters’ fates — is still very much in doubt. Archie #701 sees everyone beginning a new school year in the present — one that looks more like the Riverdale TV show than ever, with Archie having a surprise, and hidden, new girlfriend and everyone else involved in secrets and mysteries; Nick Spencer’s the new writer (and I’ll avoid the obvious jokes about him turning Archie into a Nazi…), and does surprisingly OK, while Marguerite Sauvage’s colorful, design-oriented art hits an effective midpoint between modern-realistic and classic-Dan-Decarlo.  I have 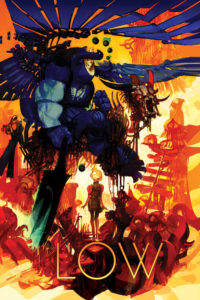 to admit, I have no idea what’s going on in Umbrella Academy: Hotel Oblivion — and I’ve read the previous two series — but anything drawn by Gabriel Ba is worth reading, and somehow Gerard Way always seems to pull the story together at the end. Finally, Low, Rick Remender’s sf fable about an Earth where an increasingly-erratic sun has driven most of the population underwater, returns for its concluding arc after a year-long hiatus; there’s a summary of the story on the first inside page, and Remender says at the end that the time off gave artist Greg Tocchini time to get ahead and do some amazing work — a judgment more than borne out by the pages themselves.

With 40 years of experience in comic reading, collecting and reviewing, English Professor Phil Mateer has an encyclopedic mind for comics. Feel free to ask Phil about storylines, characters, artists or for that matter, any comic book trivia. He will post your questions and answers on the AABC blog. His knowledge is unparalleled! He is also our warehouse manager, so if you are looking for that hard to find comic book, ask Phil!
View all posts by Phil →
This entry was posted in New Comics, Reviews and tagged Archie, Champions, Conan, Fantastic Four, Hellboy, Heroes in Crisis, Hulk, Infinity Wars, Iron Man, Rick and Morty, Runaways, Scarlet, Superman, Umbrella Academy, Winter Soldier, Wolverine, X-Man. Bookmark the permalink.