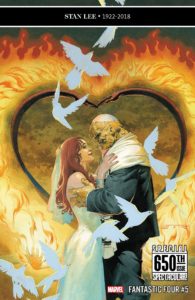 This Christmas-to-New-Year period is mostly a skip week, but Marvel’s got a major

anniversary special and a couple of first issues, and a few indy books dribbled out too. Fantastic Four #650 (or #5 if you’re using the most recent reboot numbering) features the wedding of Ben Grimm and his longtime girlfriend Alicia Masters. Your $7.99 gets you 60 story pages, all written by the team’s current scribe, Dan Slott: the main wedding and wraparound sequences are by Aaron Kuder, while there’s a flashback to the FF’s early days, starting before the cosmic rays and tracking the Ben/Alicia relationship as it developed, drawn by the amazing Michael Allred, and a Johnny Storm-arranged bachelor party by the equally-amazing Adam Hughes; they all do right by Marvel’s original super-team, and if you’ve ever followed the title in the past you should like this event.  Superior Spider-Man follows the guy who used to be Doctor Octopus, now cloned and younger and with considerably better fashion and haircut sense, as, following the events of the Spider-Gedden mini-series, he settles in San Francisco, gets a position at Horizon Labs to invent 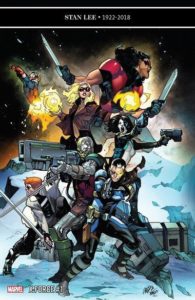 cool things to atone for past misdeeds, tries to get his ex-girfriend not to blow his cover, and suits up as the title hero when the occasion demands it. Christos Gage grounds it all in current and past continuity (including the relatively-small contingent of San Fran-based costumed characters), and the Hawthorne/von Grawbadger/Bellaire team make the visuals clear, smooth and proffessional.  X-Force #1 is a new launch for that venerable X-franchise, with the new younger Cable (from the recently-concluded Extermination series) on a mission to prevent mutant genocide in one of those vaguely-Eastern-Europe Marvel universe made-up countries; he’s got Deathlok with him, and eventually hooks up with former X-Force members Domino, Warpath, Boom Boom and Shatterstar, who are naturally suspicious of him. Decent start, although Dylan Burnett (most recently seen on Cosmic Ghost Rider) has an angular, exaggerated-facial-features style that takes 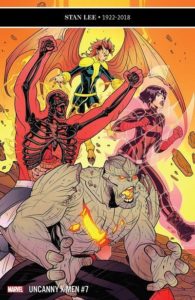 some getting used to (he reminds me of Garth Ennis’s old partner Carlos Ezquerra). Uncanny X-Men sees most of Marvel’s mutant heroes trapped in the Age of Apocalypse alternate timeline, courtesy of its ex-inhabitant Nate Grey, who’s gone crazy enough to want to remake the world to his specifications; it’s one of those complicated tales with a lot of moving parts, but its weekly publication schedule — even this week — helps readers keep things straight, and the eventual payoff, with the X-Men reset and back to basics, will hopefully be worth it (plus, if you’re nostalgic for that classic Apocalypse-world story, one of the major mutant events of the ’90s, it’s nice to see some of those character versions again…). 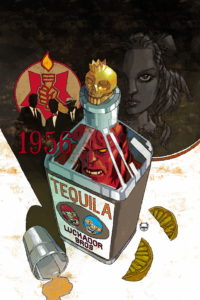 Hellboy and the B.P.R.D.:1956 continues its mini-series set in that year, with a very young 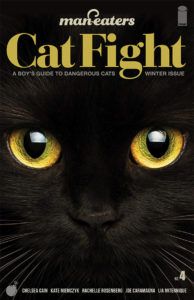 Hellboy fighting occult menaces with that title group; there’s more talking than action in this installment, although the tag-team artists are interesting — particularly Michael Avon Oeming on a sequence with the demon-possessed Russian child Varvara, which ties in to current continuity on the B.P.R.D.’s main book.  Cat Fight is not the new issue of Man-Eaters, but a mock-up of a magazine published in that world — where, because of a widespread infection, girls who begin their menstruation have a good chance of turning into savage were-cats who attack and kill the humans around them.  This has led the government to mandate things like testosterone in everyone’s water and estrogen-free products, all designed to keep adolescent girls from getting a period, and mandatory reporting of any girls who act “funny” or begin puberty. Cat Fight offers, in between its world-building articles 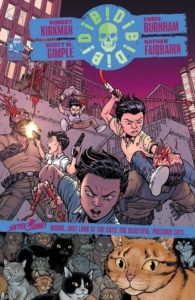 and features, occasion for subtle commentary on how girls get treated differently from boys, and similar #MeToo-era concerns; if you aren’t reading the series, it won’t make much sense, but if you are it’s a clever diversion, and offers a window into how the comic’s disease-changed society works.  Die!Die!Die! is Robert Kirkman and Chris Burnham having a lot of violent, gross-out fun, spinning a sage about a family of brothers whose dad was a hitman, and who trained them from a very young age to follow in the family business; there’s more to it, involving shadowy global-government conspiracies, but a glance at the cover, just to the left there, will give you a good idea of the brisk, bloody and often tongue-in-cheek (or tongue-ripped-from-victim’s-mouth) tone and style involved. Decision tree: if (a) you think the cover is disgusting, then (b) avoid the book; if (c) you think, ohm the kid sliding down the wire on some unfortunate’s severed arm is

hilarious, then (d) buy that sucker.  The Warning is about an alien invasion and the men who fight it; after two issues, though, I’m not sure I’d realize that if I hadn’t read an interview with writer/artist Edward Laroche, because he’s doing a very slow-burn build, jumping around in time and adding details drip by drip. That’s not a bad thing, and the individual scenes have some pop, but if you want a coherent narrative from the get-go you might want to wait for the trade; on the other hand, a very slow week like this is the perfect time to try new stuff, so leaf through it and see if it clicks with you — especially if you like aerial-combat sf stories.

With 40 years of experience in comic reading, collecting and reviewing, English Professor Phil Mateer has an encyclopedic mind for comics. Feel free to ask Phil about storylines, characters, artists or for that matter, any comic book trivia. He will post your questions and answers on the AABC blog. His knowledge is unparalleled! He is also our warehouse manager, so if you are looking for that hard to find comic book, ask Phil!
View all posts by Phil →
This entry was posted in New Comics, Reviews and tagged Die!Die!Die!, Fantastic Four, Hellboy, Man-Eaters, Superior Spider-Man, the Warning, Uncanny x-men, X-force. Bookmark the permalink.