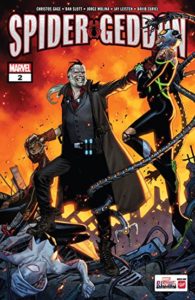 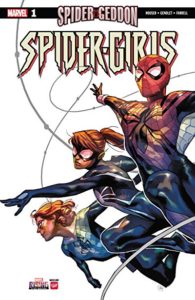 Most of the Spider-books this week relate to Spider-Geddon, the sequel to the Spider-Verse series from a few years ago that inspired the upcoming animated film. The main story, in Spider-Geddon #2, sees the villainous Inheritors escaping their prison and resuming their goal of 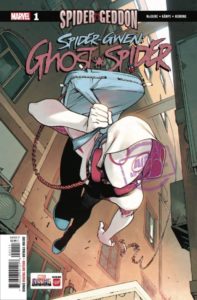 killing all the various versions of Spider-Man across the multiverse; said versions, of course, disagree, and since this is only issue two of five things don’t go well. Two other comics spin off from this one: Spider-Girls has the Mayday Parker/daughter of Peter and Mary Jane alternate-future character from all those Spider-Girl comics teaming with another alternate-future set of Parkers: the ones from the current Renew Your Vows book, to help the regular 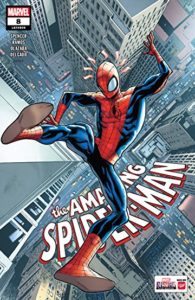 Marvel universe’s Spider-Girl, Anya Corzon, research a secret weapon to bring in at the last minute to kill the bad guys. Meanwhile, Spider-Gwen: Ghost Spider #1 sees that character, stranded in yet another timeline, struggling to rejoin the fight and, presumably, rename and rebrand herself to launch a new series at the end of this one. That leaves the flagship Amazing Spider-Man, which isn’t taking part in the festivities, and instead begins a story involving Spidey in a gang of thieves that steals paraphernalia from super-heroes; the Humberto Ramos art is its biggest selling point. 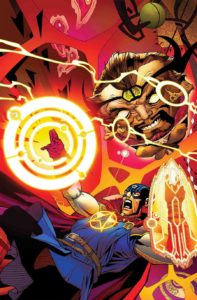 Marvel’s other current event, Infinity Wars, keeps chugging along too, with three tie-ins this week all related to its conceit that the Gamora-powered Infinity Gauntlet “folded the universe,” creating mashups of most of the regular heroes and villains. As its title implies, Arachknight is a Spider-Man/Moon Knight combo that sees a young Peter Parker’s family killed by a goblin-like monster, splintering his mind into multiple personalities and connecting him to an ancient spider-avatar. Soldier Supreme, with its second and final issue (the series’ brevity lets them explore the “what if?” conceit without getting boring),

imagines Steve Rogers and Stephen Strange combined into a WWII-era kid who takes a super-formula with both physical and mystical elements; instead of being frozen in ice, he’s trapped in another dimension before emerging into the modern day as both magician and soldier.  Sleepwalker, at four issues, is more of a tie-in to the main Infinity Wars, with the title character fighting to restore order with “folded” partners like an Ant-Man/Hulk merger called “Little Monster,” who’s really strong and looks like the regular Hulk, except that the madder he gets the more he shrinks… and, if that kind of distorted-mirror version of familiar faces intrigues you, you’re exactly the audience for these comics. 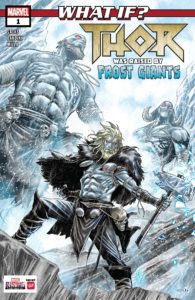 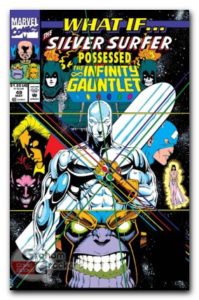 As Marvel rounds out its What If? October, this week’s new alternate-universe set-up has Thor, rather than his brother Loki,  being adopted and raised by Frost Giants;

this is the first work from Michele Bandini that I’ve actually noticed (although he’s done a number of recent issues of Captain Marvel, and a couple X-Men Gold);  he’s got stylish art and a precise thin line that’s easy to look at.  The one-dollar “True Believers” What If? reprints start with an Infinity Gauntlet turning point from issue #49, one that’s become relatively expensive because of that story’s wide exposure, and a divergence involving the Mike Zeck-drawn Kraven’s Last Hunt 1980s Spidey crossover from issue #17; the latter’s inks by the late Marie Severin are some of her last work, reason enough to spend that buck. 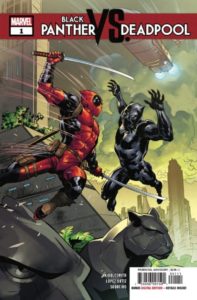 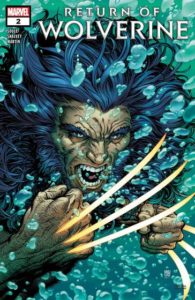 Black Panther Vs. Deadpool is exactly what you think, a meeting/battle mini-series between those two movie megastars. Kibblesmith gets points for realizing their major difference:  T’Challa, deadly serious and ultra-competent, is not know for his sense of humor, while it’s Wade’s signature trait; that’s where his “merc with a mouth” nickname comes from. T’Challa sees Wade as unserious and immoral, while Wade sees T’Challa as tightassed and judgmental. Thus: mutual antagonism and a big fight, which (as Wade helpfully explains) has been the template

for matchups like this as long as there have been Marvel comics. This is all helped by Ricardo Lopez Ortiz’s loose underground style; although he’s a newcomer, that style has made previous work, like his Kingpin mini-series during Secret War II and his initial Hit-Girl arc earlier this year with Mark Millar, memorable. Return of Wolverine continues a semi-amnesic Logan’s efforts to fill in his many memory gaps, help a damsel in distress, figure out why his claws glow red-hot now, and try not to die again; first-issue artist Steve McNiven is gone (he’s only drawing the first and last issues of this mini-series, because otherwise, given his exacting style, it would take over a year to come out), but Declan Shalvey’s a reasonably good-looking substitute.  Moon Knight hits his 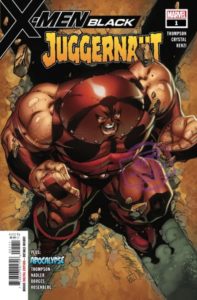 200th issue, the culmination of a number of writer Max Bemis’s subplots during his 12-issue run; that’s fortunate, because after this the title’s going on hiatus. It’s been a clever, violent and well-constructed run with some memorable villains, so even if you haven’t been reading it (and, giving that it’s being cancelled, you probably haven’t), pick up this anniversary event, which leaves its title character in decent circumstances to await the inevitable relaunch. Finally, X-Men Black: Juggernaut spotlights Professor X’s brother Cain Marco, and does a reasonable job of making him both more empathetic and more of an irredeemable bad guy — and a more formidable one, at that. 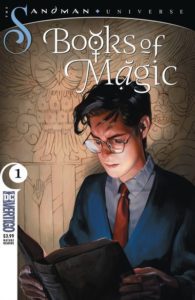 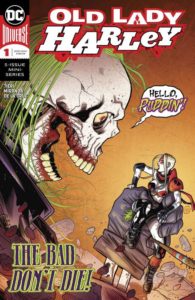 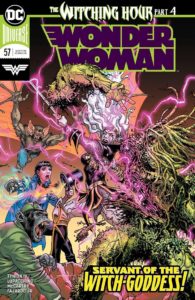 the original Neil Gaiman Books of Magic mini-series as canon, but then starts over from there, without all the accumulated backstory from the John Nay Rieber/Peter Snejbjerg/Peter Gross years; those were good stories, but for a modern new audience represent a lot of encrusted continuity, so it’s probably for the best — and having Tim Hunter as a young high school student struggling with learning about the temptations and dangers of magic puts him right where the concept works best, especially for readers that same age.  Old Lady 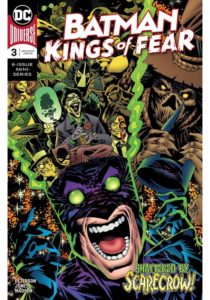 Harley is a mini-series based on an offhand Frank Tieri one-shot joke in Harley Quinn #42 — a parody of Old Man Logan, of course — that proved popular, and so now fleshes out her possible future in a 100-page story.  It’s good-looking enough (although it goes pretty much where you think it will), and Harley fans should like it.  Wonder Woman continues the “Witching Hour” crossover with Justice League Dark that sees Diana in magical thrall to the goddess Hecate, who’s bringing on a magical apocalypse; this has been surprisingly readable, with appropriately high stakes and a lot of action  and angst, and this

penultimate chapter knows how to end on a major cliffhanger, to bring everyone back for the conclusion in the Justice League Dark/Wonder Woman one-shot next week: just in time for Hallowe’en. Similarly themed for the season, Batman: Kings of Fear is 22 pages of Kelley Jones drawing Batman and the Scarecrow; you don’t need to know anything more than that to buy it, although flipping through it on the stands and admiring Jones’s EC/Wrightson-inspired art should seal the deal.  Action Comics sees Clark and a returned Lois having a long talk, interspersed with Daily Planet stuff; while Bendis’s companion Superman has had all the pyrotechnic widescreen explosions, with

Earth trapped in the Phanton Zone and the Justice League along for the ride, this title has been more focused on the regular Metropolis/Planet relationships, and that’s been a good balance: between the newspaper stuff with Perry and the Lois scenes, this has some of the best dialogue and conversation in any of the Bendis DC issues yet. Scarlet, from Bendid’s creator-owned Jinxworld imprint, has him partnered with the great Alex Maleev, with their heroine an ordinary girl who’s risen as a leader under extraordinary circumstances, and is leading a new American revolution in Portland, Oregon; its sympathetic portrait of decent people, on both sides, struggling under a corrupt system that too frequently protects and rewards the bad guys is nothing if not timely right now. 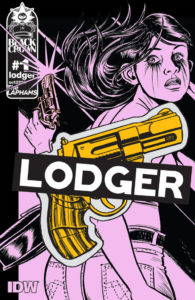 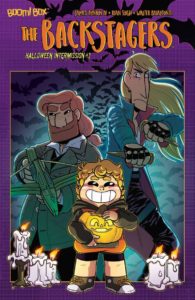 Lodger is a new black-and-white mini-series (although it doesn’t specify the number of issues) from David Lapham and his wife Muriel; it’s about a girl chasing a serial killer, and is very much like his long-running Stray Bullets, especially in the way it drops readers into the middle of the story and trusts in them to figure it out (I had to read it twice to realize the travel- 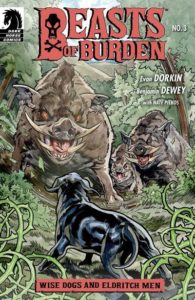 blogging “Lodger” of the title, and of the voice-over narration boxes, is actually the killer, not the girl). Tightly-constructed and staged, with clear, realistic art and vivid characters, it’s a more-than-decent crime/noir tale.    Backstagers, about the support staff of a high-school theater troupe, offers a Hallowe’en-themed one-shot about something that haunts the theater every All-Hallow’s Eve; fans of Lumberjanes should like the book’s similar group of sharply-defined, diverse characters, and similar setting: a seemingly- 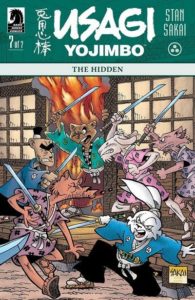 mundane milieu that’s actually full of mystical portals and magical, mythological inhabitants.  Beasts of Burden continues Evan Dorkin’s latest mini-series about animals fighting supernatural forces in a small New England town; it’s fully as good as the previous ones. Same for Usagi Yojimbo, which concludes a seven-part story about persecuted Christians in late-sixteenth-century Japan with its usual combination of humor, action, thoughtful themes and clever plotting (including something of a twist ending, so if you haven’t been reading this don’t start here; get the previous six issues or wait for the coming trade collection).

With 40 years of experience in comic reading, collecting and reviewing, English Professor Phil Mateer has an encyclopedic mind for comics. Feel free to ask Phil about storylines, characters, artists or for that matter, any comic book trivia. He will post your questions and answers on the AABC blog. His knowledge is unparalleled! He is also our warehouse manager, so if you are looking for that hard to find comic book, ask Phil!
View all posts by Phil →
This entry was posted in New Comics, Reviews and tagged Backstagers, Batman, Beasts of Burden, Black Panther, books of magic, Deadpool, ghost spider, Harley Quinn, Infinity Wars, lodger, Moon Knight, Scarlet, Spider-Geddon, Spider-Girls, Spider-man, Superman, Thor, Usagi Yojimbo, What If?, Wolverine, womder woman, X-men. Bookmark the permalink.