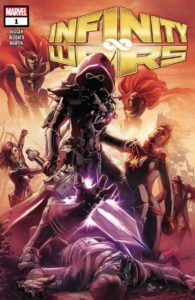 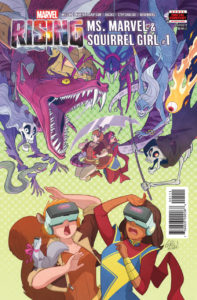 Infinity Wars probably works better if you’ve read the lead-ups to it, but all you really need to know is that the Guardians of the Galaxy, who have an Infinity Stone, come to earth to meet with the other stone-holders, including Doctor Strange, Captain Marvel, Warlock, the Black 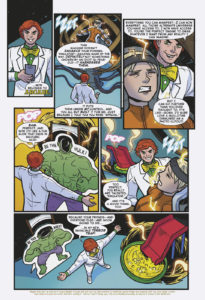 Widow, and the street-level gangster Turk, who shows up to the parley with bad guys like the Sandman and Bullseye in tow; it ends in a shocking (and very Bullseye/Elektra-like, although neither of those characters is involved) death, but, as we comics pros all told stunned Avengers-moviegoers, having a time gem means never having to say you’re sorry.  This is all drawn in Mike Deodato’s comicbook-realistic style, with effective use of splash and double-splash pages adding dramatic heft, and at $5.99 for 40 story pages is not a bad deal. Marvel Rising: Ms. Marvel and Squirrel Girl uses the same price and format for its third installment of a four- 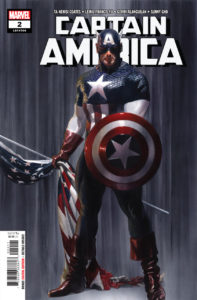 part crossover between those two titles, with America Chavez thrown in for good measure; teaming regular series writers Wilson and North (along with Devin Grayson) yields a lighthearted, modern, and energetic YN (Young Nerd)-oriented tale that most regular comics fans should appreciate, too. One problem: the published issues have a duplicate of story page #38 where page #36 should be;  Marvel is promising to send out replacement copies in a week or two, but in the meantime has provided the missing page — you can see it just up to the left there, although if you haven’t read the comic yet don’t look too closely; it’s got the story’s major villain reveal. One of the pleasures of reading Ta-Nehisi Coates’s Black Panther has been watching him learning how 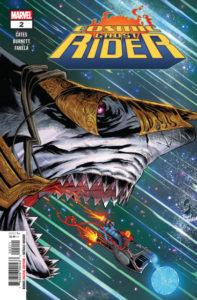 to write good comics: that heavier themes work only if they’re in service to the story, and that reader-pleasing twists come from your own inner fan; with that all sorted out, his Captain America‘s first two issues have offered a smooth super-spy action-adventure story with well-considered political overtones, and a last page that demonstrates a Scott Snyder-like ability to make readers want to come back to see what happens next.  Donny Cates is an even-newer writer with similar talents, with two Marvel titles out this week; Cosmic Ghost Rider is the romp, with an impossibly-ancient and cosmic-power/spirit-of-vengeance-infused Frank Castle traveling from the far future to a past where Thanos is a toddler, and kidnapping him to try to prevent his becoming Standard Evil Thanos; the glimmer of a nature-vs. nurture debate is drowned out by cheerfully-gonzo grindhouse 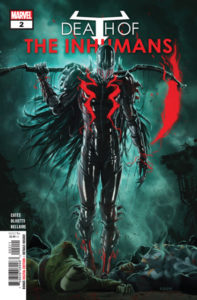 elements like alien bar fights, a snarky Watcher and alternate timelines. Death of the Inhumans is not a romp (except in a kind of murder-y sense) as Black Bolt and the remains of the royal family try to fight the entity that’s already killed most of their race, with limited success and yet another last-page shocker (although the fact that the character in question is featured prominently on the cover of next issue suggests that his fate isn’t as permanent as it looks); Olivetti’s shadowy art style complements the grim proceedings nicely, and what on paper looked as a cynical cash grab is actually turning out to be a decent story — especially if you haven’t been a fan of Marvel’s attempts to expand and burnish this particular set of characters over the last few years. 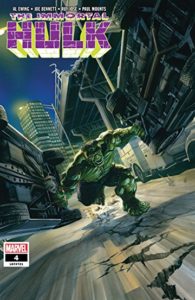 Immortal Hulk, after a very effective trio of one-shot stories, starts a two-part one involving Walter Langowski/Sasquatch; Ewing and Bennett continue to mine veins of horror, both psychological and physical, and 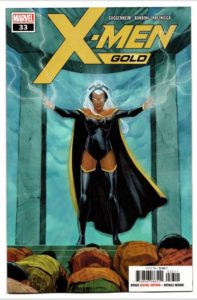 have established this as the best of the recent Marvel relaunches so far.  Ant-Man and the Wasp is pretty good, too — it’s been taking the now-more-normal five or six-issue trade route for its first arc, involving the Nadia and Scott versions of the title characters lost in the microverse, and it’s been a fun, heady combination of quantum physics, xenosociology, effective characterization and detailed, attractive art, well worth checking out (but is you haven’t read the first three issues, 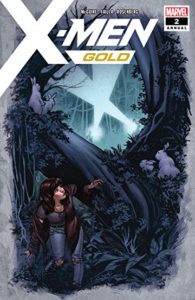 pick them up along with this fourth one, and you’ll have a much better idea of what’s going on). That leaves a trio of X-books: X-Men Gold #33, the closest to the “classic” Uncanny X-Men, starts a new tale involving Storm going back to the African village that used to worship her as a goddess, to find that they’re now under the thrall of a more sinister deity, while the X-Men Gold Annual is a past-set story for Kitty Pryde fans, sending her to her old summer camp and friends just months after she originally joined the team, and driving home themes of prejudice and friendship in a reasonably non-preachy way (the best 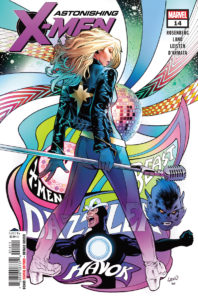 compliment to new scripter Seanan McGuire is that it reads like something Chris Claremont would have written). Astonishing X-Men is the second issue involving newly-sane Alex “Havok” Summers trying to put together a not-exactly-sanctioned X-team; besides the cover-featured Dazzler and Beast, there’s a mostly-resurrected Banshee (the old male one), Warpath, and an entertainingly sad drunk jilted Colossus; Rosenberg makes this scruffy collection of characters amusing and easy to root for, while Greg Land’s art is as pleasingly eye-candyish as always — although having him draw a team with only one female character seems a waste of his cheesecake-oriented talents…. 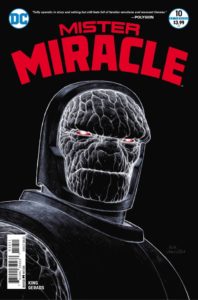 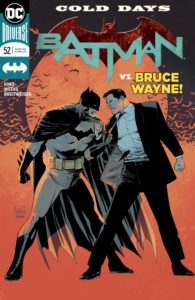 Tom King’s the go-to DC writer this week, with both Mr. Miracle and Batman; Mr. Miracle gets first position, both because of the detailed, excellent Mitch Gerads art and coloring, and because it’s such an obvious labor of love for everyone involved. The plot involves Darkseid, close to winning a war with New Genesis, offering a treaty with very 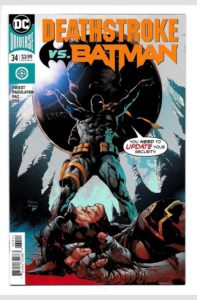 favorable terms — as long as Scott and Barda give him their first-born son to be raised on Apokalips (which is, of course, exactly what happened to Scott himself). The moral dilemma, and the way we never see actual battles, but only the small human moments between them, makes it work — although I’ve been speculating since the first ten pages of issue #1 that all of this is a psych trap, taking place only in Scott’s mind; we’ll see in two more installments.  Batman, King’s other book, continues a post-Catwoman-breakup Mr. Freeze story involving Bruce Wayne on a jury: the other members want to convict Freeze, but Wayne, who beat a confession out of him in his costumed identity, argues for 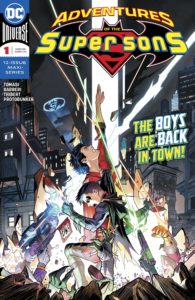 acquittal. As with Mister Miracle, the trick’s in the sideways way the story setup shows Wayne’s original anger, and his resulting guilt, without actually talking about it, a clever reminder of why King’s such a good writer. Deathstroke also involves the Dark Knight, as it continues a longform battle with Batman, as twisty and ultra-clever as you’d expect from Christopher Priest; this is another story where it’s best to back up and get the previous four issues of the tale first, so you can appreciate all the reversals, betrayals and triple-crosses.  Adventures of the Super Sons is a first issue, but really just a continuation of Damian Wayne and Jon Kent’s previous comic, in the form of a 12-part mini-series; same creative team, and same charming look at the sons of DC’s main two 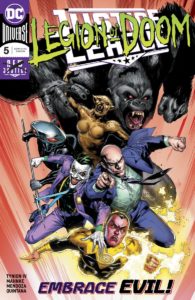 heroes, as they bicker and bond and learn about teamwork, so if you liked it before you should keep liking it now.  Justice League hits “pause” on its big cosmic ongoing plot to spotlight the bad guys, with James Tynion IV providing the script (he’s scheduled to handle similar villain-centric issues about once an arc, giving regular writer Scott Snyder an occasional break); it’s an origin of the Legion of Doom, showing Lex Luthor’s quest to gather his allies and talk them into changing the universe, and provides backstory and motivation that didn’t fit into the regular ongoing story — so, if you’re reading the comic anyway, it’s an essential puzzle piece, not a fill-in (and, if you have fond memories of the Legion from all those TV Justice League cartoons, it’s pretty cool in its own right, too). 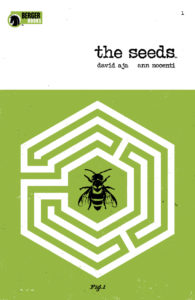 The Seeds is from editor Karen Berger’s new Dark Horse imprint, Berger Books; written by longtime comics scripter Ann Nocenti and drawn by David Aja, it’s a near-future story of an earth that’s breaking down ecologically; walls separate the cities from the badlands outside. An idealistic 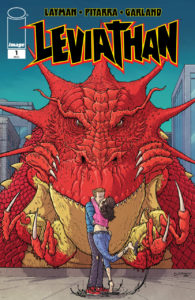 journalist (one of the few left fitting either of those terms) stumbles into a story about aliens who’ve come to the planet to harvest its seeds and similar life-form relics, which will become valuable once the planet itself goes dead; Nocenti’s well-constructed, character-centric script meshes with Aja’s lush, precisely-designed and attractive art to create a dense, compelling narrative.  Leviathan is writer John Layman’s follow-up to the cult-classic Chew (interestingly, that series’s artist, Rob Guillory, released his own new comic, Farmhand, just two weeks ago…); as the cover indicates, it’s a big valentine to kaiju comics, with a Godzilla-sized monster trampling an unsuspecting city due to an occult ceremony gone wrong; it’s got the wild inventiveness of Chew, and artist Nick Pitarra has

an obvious blast drawing Geof Darrow-level rubble, wreckage and assorted mayhem — pick this one up now, because it’s likely to sell out when readers discover its rocket-charged, destructive style.  Stray Bullets, meanwhile, just keeps coming out every month like clockwork, with David Lapham’s longest sustained story yet (you can argue that every single Stray Bullets ever is part of one big story, too, but let’s not even go into the Faulknerian-level complexity required to diagram and explain it…);  it’s got even more gunplay, corruption, crime and action than normal, with an explosive climax.  If you’ve never read it, you’ll be confused but intrigued by Lapham’s well-honed ability to tell an addictive story peopled by vivid, fascinating characters.

With 40 years of experience in comic reading, collecting and reviewing, English Professor Phil Mateer has an encyclopedic mind for comics. Feel free to ask Phil about storylines, characters, artists or for that matter, any comic book trivia. He will post your questions and answers on the AABC blog. His knowledge is unparalleled! He is also our warehouse manager, so if you are looking for that hard to find comic book, ask Phil!
View all posts by Phil →
This entry was posted in New Comics, Reviews and tagged Ant-Man, Batman, Captain America, Cosmic Ghost Rider, Deathstroke, Hulk, Infinity Wars, Inhumans, Justice League, Leviathan, Mister Miracle, Ms. Marvel, Squirrel Girl, Stray Bullets, Super Sons, The Seeds, Wasp, X-men. Bookmark the permalink.