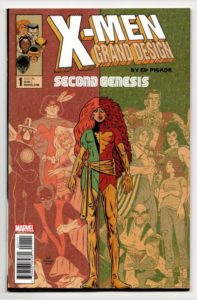 All the first issues seem to be X-related this week.  The most interesting is the continuation of Ed Piskor’s X-Men: Grand Design, a retelling of all of the X-cast’s history in chronological order, mostly based on Uncanny X-Men, but with some other relevant stuff too; this issue covers events from Giant-Sized X-Men #1 through the death of Phoenix in 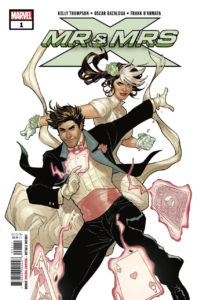 Uncanny X-Men #137, a four-year run that’s the backbone of Marvel’s Bronze Age. Piskor combines deliberately-garish, indy-primitive art with a fan’s obsessive knowledge to create a compressed but highly-readable (and accurate) story that’s surprisingly gripping, especially to older readers who actually read all those issues as they came out. Mr. and Mrs. X is a new series, pitched to a much newer audience, following the newlyweds Rogue and Gambit; it’s by Kelly Fitzpatrick, who wrote that duo’s popular mini-series earlier this year, and proved an affectionate caretaker of their star-crossed relationship and personalities. It starts with an expanded look at the wedding itself (which got short shrift in X-Men Gold #30), and, in the book’s second half, gets the couple into outer space on an emergency mission that’s breezy, sometimes-dramatic fun, enhanced by Oscar Balzadua’s clear-lined, attractive art; it’s well-told enough to be at least a mild hit. X-Men: Wakanda 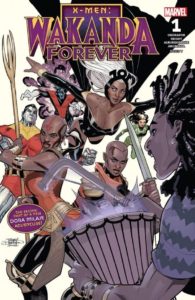 Forever is listed as a first issue, but is actually the middle of a three-part tale that started with Spider-Man: Wakanda Forever last month, and will conclude with Avengers: Wakanda Forever in a few weeks; it focuses more in the Dora Milaje than the Panther, as they try to track down a Wakandan traitor with help from the various regular heroes. Storm, of course, plays a big part here, and since it’s the middle of a trilogy there’s both a partial resolution and a cliffhanger reveal to lead into the final installment. Decent enough, with art reminding me a little of Riley Rossmo (from Alburquerque, I think…?);  fans of both the Black Panther comics and movies, and the other heroes’s books, should be entertained. 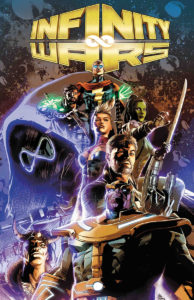 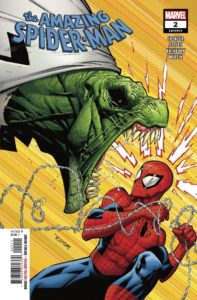 Infinity Wars: Prime kicks off Marvel’s cosmic-themed summer event (or continues it, since it’s already had five issues of a set-up series, plus some tie-ins); we get a lot of moving around of the Infinity Gems, and an ending death that’s suitably startling (and also obviously not permanent, but explains that character’s appearance in Hel in last week’s Thor…); the best reason to buy it, other than the whole big-crossover-event thing, is the Mike Deodata Jr. art.  Amazing Spider-Man drops the second issue of its relaunch with a big relationship development from its previous issue still intact; it’s a bold and unexpected 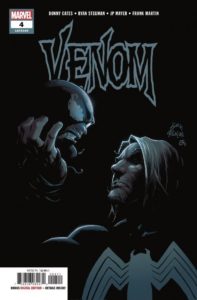 move (although Joe Quesada’s being replaced recently as Marvel chief editor by C. B. Cebulski would have made it a lot easier…), and an encouraging sign for new writer Nick Spencer’s tenure. Ryan Ottley’s efficient, minimalist style looks good (although Pete and Mary Jane look a lot like Mark and Eve, from Ottley’s long-running stint on Invincible), and the combination of familiar elements, like Dr. Curtis Connors/The Lizard, with the newer plot twists  keep it energized and engaging… so far.  Venom is benefiting from new (and mega-hot) writer Donny Cates’s 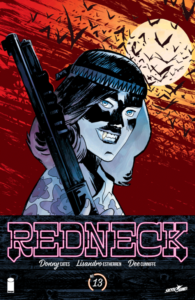 imaginative, pyrotechnic style, as Eddie Brock, and the planet Earth, get visited by the God of Symbiotes, and the title gets an infusion of cosmic mythology that already seems to be crowd-pleasing, and has fans scrambling for any previous appearances by the character.  Anyone new to Cates’s work should check out Redneck, his Image comic, also out this week — it’s about vampires in modern-day Texas, and the pun in the title gives you some idea of the clever cultural clashes involved, not to mention the cheerful violence and the keenly-drawn relationships; they all marked Cates as a writer to watch when this series debuted last year. 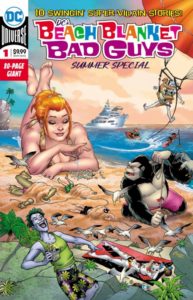 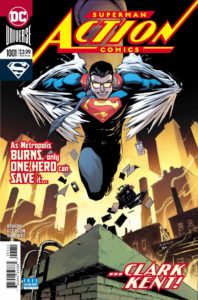 summer or vacation. Is it worth the $9.99? There are no ads, so you get ten eight-page tales: Joker/Bizarro by Lee Bermeja and Francesco Matting; Lex Luthor by Jeff Loveless and David Williams;  Mr. Freeze by Paul Dini and John Paul Leon;  Cheetah by Vita Ayala and Amancay Nahuelpan;  Black Manta by Gabriel Hardman and Corinna Bechka;  Giganta by Michael Moreci and Max Raynor;  Gorilla Grodd by Tim Seeley and Minkyu Jung;  Deathstroke by Shea Fontana and Carlos D’Anda; Penguin by Daniel Kibblesmith and Laura Braga; and the Crime Syndicate by Collin Kelly and Jackson Lanzing, and Giuseppe Camuncoli. The first and last are the best, and a Paul Dini Mr. Freeze is always 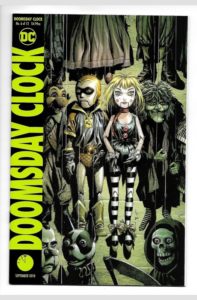 worth a look; the Lex Luthor and Giganta entries are pretty good, too.  Action begins its Brian Bendis era (following his Superman #1 a few weeks ago) with emphasis on Metropolis and the supporting cast, and how Supes is a street-level presence in that city; it deals with that book’s is-Superman-the-arsonist mystery quickly, uses a couple of bits to establish his so-ernest-it’s-a-super-power personality, and stirs in a few soap-opera subplots, one revealing a new group of enemies: more than enough to keep old readers, and attract some new ones, too.  Doomsday Clock hits the halfway point with a story that, with last issue and this one, 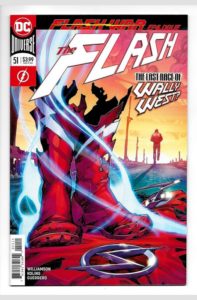 is finely cohering; it’s built around a Mime/Marionette origin, emphasis on the Marionette, but it’s also about how those two form a tentative mutual-admiration society with the Joker, and Gary Franks draws such a great Clown Prince of Crime that we don’t even mind the Batman spends the whole issue unconscious in a wheelchair.  Flash is an epilogue to the just-concluded “Flash War,” with a grief-stricken Wally West searching for his reality-wiped family and refusing to stop running; it’s got a reference to “Sanctuary,” the DC haven for heroes suffering from PTSD, and helps to set up that upcoming mini-series.  The Joshua Williamson/Scott Kolins combo continues to make it a quiet, steady success. 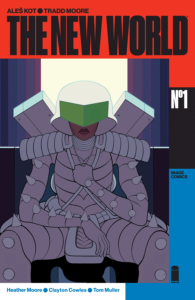 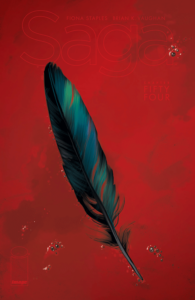 The New World’s “new world” is set maybe 50 years from now, after an American civil war that’s seen California expand to take over 25% of the country and become its own nation; there’s a bounty hunter whose televised takedowns of perps have made her a star, and an anti-government revolutionary who’s fighting the power in imaginative ways, and they end up on a collision course (in a couple of 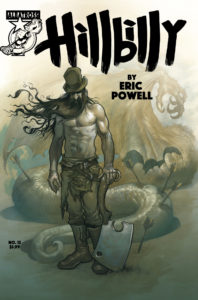 different senses). The Moore art (drawn by Tradd; colored by Heather) is bold, brightly-hued and well-designed, with a number of catchy splash pages; and at $4.99 for 60 pages of story (plus a short back-up), there’s more than enough here to hook readers for the rest of this five-issue mini-series.  The other titles in this section all offer conclusions: Saga reaches the end of its current volume with a huge bang, a plot development more wrenching than anything that’s come so far (the sombre cover hints at it, although that feather is something of a feint) — and then announces in the letters 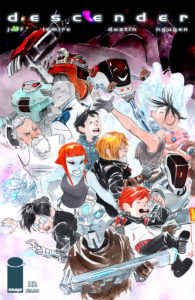 page that the creative team is taking a year-long break; artist Fiona Staples nails the conclusion, and writer Vaughan picks exactly the best (or, for some readers, the worst) moment to drop the mic and take a hiatus.  Hillbilly, Eric Powell’s backwoods supernatural noir, finishes its own current arc with the title character and friends fighting an army of witches and other horrors; Powell’s very EC-era Jack Davis-like art is perfect for it. Descender, Jeff Lemire and Dustin Nguyen’s galactic robot-revolution comic, ends in suitably-apocalyptic fashion, with a letters-page announcement that the story will

continue, with an almost entirely-new cast and a shift to fantasy/sf (instead of sf/fantasy)  in the new ongoing comic  Ascender.  That’s good news for fans, and Lemire’s editorial, where he talks about how the book’s original planned ending came to seem too limiting, is a fascinating look at the creative process.  Moonshine, whose title refers both to what hillbillies drink and to the trigger for lycanthropism,  ends its second book with a lot of the principles dead — but plenty of material left to start the next volume; as with Saga and Hillbilly, it’s the combination of solid story and very accomplished art (in this case, by Eduardo Risso) that makes it such an automatic buy. 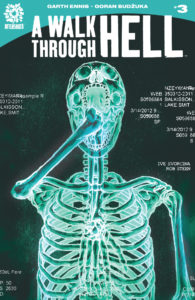 Risso’s getting around this week — he’s also the artist on the current arc of Hit Girl, joined by another familiar name:  Jeff Lemire, who’s handling this story, set in Canada, after the departure of series creator Mark Millar. The writing’s fine, but it’s Risso’s shadowy, always-noirish art that makes such a good fit for this title’s mobsters, exotic weaponry and pint-sized, ultra-violent protagonist.  A Walk Through Hell is Garth Ennis following two very skilled, long-partnered FBI agents who, having entered a warehouse where mysterious violence has occurred, find that they’re 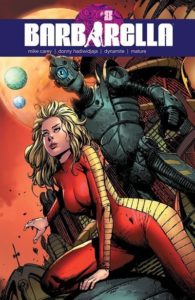 in, yes, hell — no demons or brimstone, but a lot of dread and encounters with other people doing horrible, impossible things to themselves (the cover, just up to the right there, offers an example). That’s the set-up; this third issue is mostly flashback, to one of their previous cases involving a human monster who may have some connection to what’s happening. Because Ennis is playing his revelations very close to the breast, it’s too soon to tell exactly where this is going, but it promises to be a bloody, dark and hopefully-not-entirely-depressing tale (no guarantees on that last one, though, as anyone who’s read his Crossed stories can testify…).  Barbarella is its opposite in tone, as sunny in spirit as its heroine, whose confidence in her combination of competence, smarts, practical

psychology and sexuality makes her unstoppable. This one-issue story is a perfect jumping-on point to admire how good writer Mike Carey (Lucifer, The Highest House) is at updating the space-faring adventurer to the #MeToo era, without preaching: just by showing how she deals with a particularly possessive, macho one-night stand.  Rick, of Rick and Morty, is a particularly competent and smart character too; it’s just that it’s hard to see him as a hero, since he’s both psychotic and sociopathic — although marginally less so with his grandson Morty, and his daughter and granddaughter.  You know this if you watch the growing cult- 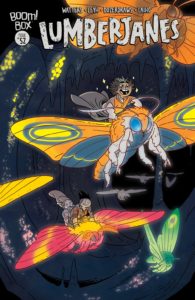 favorite TV cartoon, but even if not, the comic is still a lot of deeply-cynical, sometimes-horrifying fun.  That leaves Lumberjanes, which always seems to come out the same week as Rick and Morty, just because the universe likes to balance itself: it’s as fundamentally optimistic as Barbarella, without that title’s grown-up sex, and as imaginative in its story elements as Rick and Morty, without the world-weariness or violence:  fantastic creatures and adventures mixed with soft-sell themes of friendship and tolerance, presented skillfully enough to avoid being preachy or twee while still entertaining an all-ages audience, explains why it’s published over 50 issues so far, with few signs of faltering.

With 40 years of experience in comic reading, collecting and reviewing, English Professor Phil Mateer has an encyclopedic mind for comics. Feel free to ask Phil about storylines, characters, artists or for that matter, any comic book trivia. He will post your questions and answers on the AABC blog. His knowledge is unparalleled! He is also our warehouse manager, so if you are looking for that hard to find comic book, ask Phil!
View all posts by Phil →
This entry was posted in New Comics, Reviews and tagged Barbarella, Beach Blanket Bad Guys, Descender, Doomsday Clock, Flash, Hillbilly, HIt Girl, Infinity Wars, Lumberjanes, Moonshine, Redneck, Rick and Morty, Saga, Spider-man, Superman, The New World, Venom, Walk Through Hell, X-men. Bookmark the permalink.