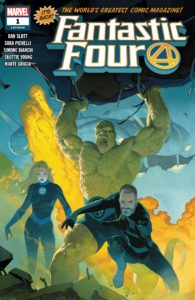 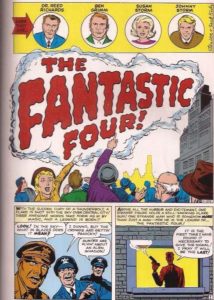 One reason Fantastic Four relaunched this week is that Wednesday, August 8 was exactly 57 years after Stan Lee and Jack Kirby’s original FF went on sale and kick-started the Marvel universe.  You can see the first page of that 1961 debut over to the right there; it’s got 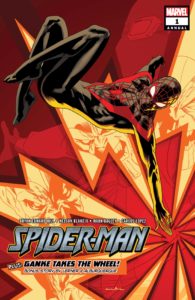 Reed Richards firing a flare gun with the group’s name. This week’s 30-page main story ends with a Richards flare, and it’s no accident that writer Dan Slott’s title for it, “Signal in the Sky,” is taken directly from that page; he’s signaling to us that he’s done his homework. It’s a good story, picking up on Johnny and Ben going about their lives, still thinking Reed, Sue and the rest of the family died in that Secret Wars thing; Sara Pichelli’s art works well in these everyday parts, especially in a couple of Ben/Alicia scenes, and she and colorist Marte Gracia get off some flashy Human Torch shots.  There’s not a lot of action — this is  very much just the intro chapter to a longer tale — but it’s played well enough that we don’t mind.  There’s also a nine-page 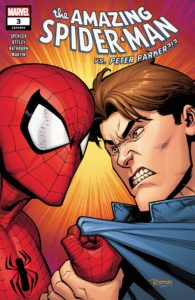 Doctor Doom story by Slott and Simone Bianchi (which gets him back to Latvaria and into his familiar armor and mask), a one-page Skottie Young strip, a one-page editorial by current (and long-time) FF editor Tom Brevoort, and that first-four-pages Steve Ditko tribute that’s in all the Marvel books this month: more than reason enough to try it.  Spider-Man Annual is about the Miles Morales version;  it’s got a 24-page main story that wraps some present stuff around a flashback to a much younger Miles and crew during the Skrull Secret Invasion, and it’s an encouraging sign that Marvel can produce solid stories about the character even without Brian Michael Bendis.  Amazing Spider-Man is 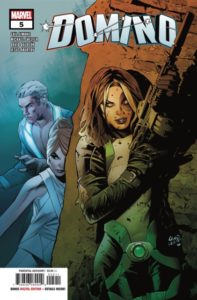 only three issues into its new run, and already into a Spidey-and-Pete-are-split gimmick right out of a Mort Weisinger Silver-Age Superman comic.  Amazingly, it works; Ryan Ottley’s simple, direct art meshes with Nick Spencer’s broad-strokes plot to tell a smooth story that hooks readers without them even knowing it.  Domino’s addictive, too, but in an earthier, more grown-up way; its kick-ass, working-class young women have grown up in the #empowerment age, and are the shock-troop role models for it. This first arc’s been about taking the title character’s luck-based groove away, and then getting it back; this issue 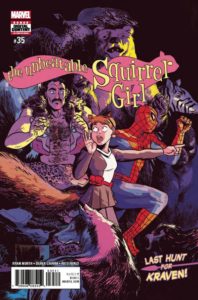 does that via a long battle against a bunch of her new mentor Shang-Chi’s old adversaries, spurred on by his sensei-like advice, with author Gail Simone’s typical blend of tough-girl noir with splashes of comedy and relationship themes keeping it interesting.  Squirrel Girl concludes a Kraven three-parter that’s been excellent, especially considering that it’s been the first without signature artist Erica Henderson; come for the Spider-Man guest appearance and his debate with the eternally-optimistic Doreen, but stay for the discussion of Russian existentialism and the after-credits scene. 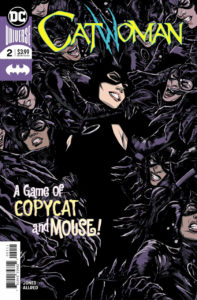 Sandman Universe is a 48-page one-shot with “story by Neil Gaiman,” but four other writers listed, too; it begins with Dream missing and Matthew the raven searching for him, and it’s really a way of introducing four new ongoing Vertigo titles set in, yes, the Sandman universe: The Dreaming, by Sy Spurrier and Bilquis Evely, following most of the main cast; House of Whispers, by Nalo Hopkinson and Dominike Stanton, with a voodoo-oriented “house” to go 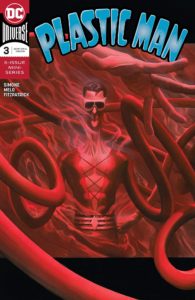 with the House of Mystery and the House of Secrets; Lucifer, by Dan Watters and Max Fiumara; and a Books of Magic by Kat Howard and Tom Fowler that has a young Tim Hunter still in high school and new to his magical abilities. If you were a fan of any of these titles (or their equivalents) back in the day, you’ll want to check this out, and there’s enough to introduce and intrigue new readers, too; Gaiman’s creations have been mostly an untapped mythology for decades now, but there’s a rich tapestry of settings, characters and situations there, and Sandman Universe is a good introduction to them.  Catwoman sees Selina fighting a powerful family that’s using cosplay versions of her to commit crimes; its main 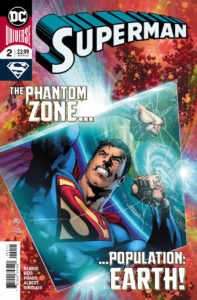 attraction continues to be Joelle Jones,  a major young artistic talent (who’s also writing the book), with a knack for both high-fashion and action scenes.  Plastic Man is Gail Simone again, playing up the former Eel O’Brian’s past criminal contacts, with someone framing him for murder; it’s the same noir/comedy mix as Domino, but, given the pliable protagonist, more tilted towards the funny parts.  Superman sees Earth mysteriously transported to the Phantom Zone, with all the disruption that suggests; lots of Justice League crossovers and set-ups for all the menaces there (including Rogol Zarr, the big bad guy from the just-concluded Man of Steel series), setting up a huge fight for next issue; given both the wrenching, dramatic 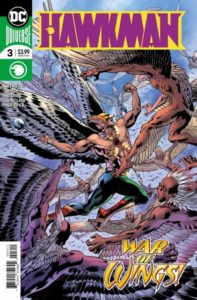 development and the breakneck pace, you certainly can’t accuse new series writer Brian Bendis of thinking too small for his first arc.  Hawkman has Carter Hall searching for his origins, and finding them, plus a doppleganger or two; it’s a complicated plot because the character has such a complex backstory, but it’s saved by the Brian Hitch art; Robert Venditti makes sure to give him plenty of pretty superhero-action pictures to draw, including two splashes and two double-page ones — the first, covering the book’s second and third pages and showcasing Hawkman fighting a Tyrannosaurus, should be enough to sell it to any casual browsers who encounter it, while the second, with a big fight against an army of winged warriors, seals the deal. 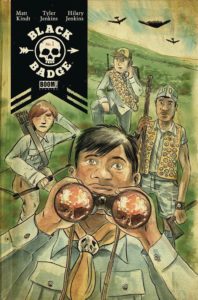 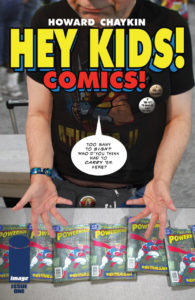 Of the newish indy books, Black Badge is Matt Kindt’s new ongoing series, following the conclusion of Dept.H a few months ago; it teams him with his Grass Kings collaborator Tyler Jenkins for a tale about what happens when a Boy Scout has earned every single merit badge available: they get access to the secret “Black Badge,” which makes them globe-trotting super spies (because who would suspect wandering, wholesome scouting kids?).  A sideways reference to Mind MGMT shows that this is set in the same Kindt-verse as that title, and this first issue is good at providing the set-up, and a first mission for a naive rookie; as with all Kindt’s stuff, it’s imaginative, character-rich and has a Mr. Robot-level paranoia about the world and the secret powers that run it: an effective combination for a 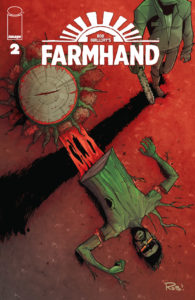 comic.  Hey Kids! Comics! is a Howard Chaykin production that’s a thinly-disguised history of the comic biz: this first issue jumps around in time (from the opening scene in 1967 to 1945, 1955, 1965 and 2001) and introduces a lot of characters; half the fun is linking them up to their “real-life” counterparts (Yankee Comics = DC; Verve Comics = Marvel; from there, you can spot the Jack Kirby and Stan Lee avatars and then figure out the rest with some Googling), while the other half is admiring Chaykin’s ability to nail the New York City fashions and architecture for all those different eras. He’s been around the industry himself since the very late 1960s, so it’s all got an insider’s ring of truth, and the comics field has had so many grifters, heroes, mobsters and other larger-than-life characters and 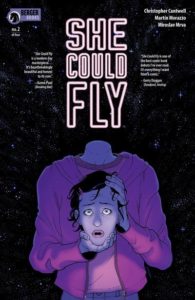 scandals that he could keep this series going for decades. Farmhand is the second issue of Chew artist Rob Guillory’s new series, about a scientist/farmer who’s discovered a way to grow human organs like vegetables — so, instead of a field of ears of corn, it’s just actual ears (or noses, hearts, etc) growing there instead. This is crazy, but starting with a crazy premise and then seeing where it leads is what any decent science fiction (including Chew) is about, and so far this looks like it’s going to be a lot of dark-edged fun.  She Could Fly, also on its second issue, is about a teen girl with severe obsessive-compulsive disorder who gets tangled up with the inventor of a flying harness, who’s on the run from shadowy corporate bad guys.  Martin Morazzo contributes clear, good-looking art, and the author, Christopher 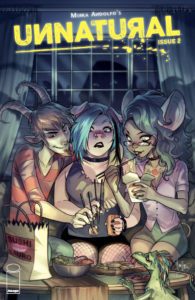 Cantwell (the creator/showrunner of AMC’s Halt and Catch Fire, not the crying-Nazi white supremacist with the same name) has OCD, too, so the mental-health hook is solid without being exploitive; the result is a haunting, evocative tale of (maybe) redemption.  Unnatural is an English version of Italian comics creator Mirka Andolfo’s European-published mini-series; imagine a funny-animal combo of Friends and The Handmaid’s Tale, and you’ll be close. The big attraction is Andolfo’s art; her cute/sexy style, especially on her main character (see the cover, just to the right there?), makes it obvious why this book was a hit, especially with the way its sf/fantasy political themes mesh with the #MeToo era. 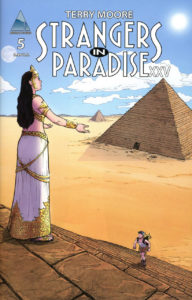 The remaining indy books are all known quantities: Strangers in Paradise, for example, has that “XXV” after it because this year marks its 25th anniversary, and this tweilve-issue sequel sees Katchoo re-drawn into a web of international intrigue. Part of the fun has been watching creator Terry Moore integrate this new story into the other work he’s been producing since then: we’ve already had connections to Rachel Rising, and this issue establishes a close connection to Echo, too — which, given the apocalyptic events in that title, ups the stakes considerably. World of Tanks is Garth Ennis and P.J. Holden doing WWII tank comics (duh) involving a battle between Russian and German forces; the way Ennis 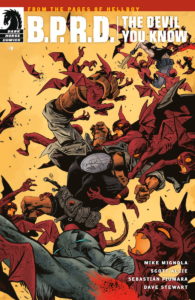 casually, and skillfully, makes the combatants on both sides human, with all the heroism and frailties that term implies, while also keeping the historical record accurate, is the main attraction. B.P.R.D. continues to wind up a couple of decades’ worth of horror/adventure Mignolaverse comics, once again featuring Hellboy (who died and went to hell, but got better) and crew against vast supernatural forces; the fact that this comic will end soon raises the stakes in its story, too — readers can’t be confident that the perpetually-pending Armageddon the characters have been battling for years won’t, this time, win for good.  Lumberjanes: A 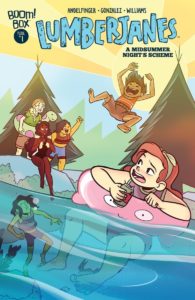 Midsummer Night’s Scheme offers a $7.99 Summer Special one-shot with a 32-page main story (involving denizens of fairyland; hence the title) drawn by Maddi Gonzalez, who previously did work on the Lumberjanes/Gotham Academy crossover.  There’s also an eight-page backup by Brittney Williams, whose minimalist manga-fied style (Hellcat; Goldie Vance) fits into the Lumberjanes milieu so seamlessly that the only surprise is that she’s never done one of their stories until now; both tales offer the mix of adventure, friendship, teamwork and diversity that characterize all the books, and have turned them into steady sellers, especially to younger readers.

With 40 years of experience in comic reading, collecting and reviewing, English Professor Phil Mateer has an encyclopedic mind for comics. Feel free to ask Phil about storylines, characters, artists or for that matter, any comic book trivia. He will post your questions and answers on the AABC blog. His knowledge is unparalleled! He is also our warehouse manager, so if you are looking for that hard to find comic book, ask Phil!
View all posts by Phil →
This entry was posted in New Comics, Reviews and tagged B.P.R.D., Black Badge, Catwoman, Domino, Fantastic Four, Farmhand, Hawkman, Hey Kids! Comics!, Lumberjanes, Plastic Man, Sandman, She Could Fly, Spider-man, Squirrel Girl, Strangers in Paradise, Superman, Unnatural, World of Tanks. Bookmark the permalink.