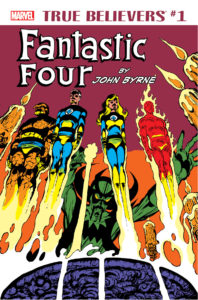 Marvel offers two more of its $1 “True Believer” Fantastic Four reprints this week, both spotlighting writer/artists who had influential runs on the title. The first, John Byrne, 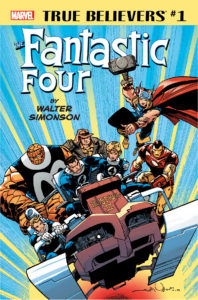 had arguably the best since the Lee/Kirby era: a five-year early-’80s stint that kicked off with the stand-along story reprinted here; it’s a textbook example of how to write an done-in-one introductory issue that spotlights all the characters and their powers, mixes in the family/friendship/heroism themes that have always been central to the title, and looks terrific. Walter Simonson’s contribution came a decade later, was shorter (only about a year and a half),  not a stand-alone tale (by his tenure, creators were starting to think more in four-to-six issue chunks), and had to deal with previous writers’ continuity (at this point, Ben Grimm is human, and the Thing is a woman. No, you really don’t want to know how that happened…), but it looks just as terrific as Byrne’s story; it’s interesting to see two creators who developed so differently, although both were influenced by Kirby. As 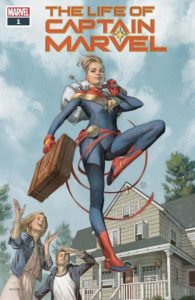 with the other “True Believers” books, if you don’t have these then by all means spend the buck and get them — that will get you hooked on both creators, and lead to a lot of great comics reading, and not just on the FF. The other #1 issue this week is The Life of Captain Marvel, a five-issue mini-series that looks at Carol Danvers’s childhood and (eventually, presumably) origin, mixed in with a present-day trip to her home town that reveals problematic family relationships. OK for what it is — grist for an eventual trade collection that will be available when the Captain Marvel movie shows up next spring — and it should be agreeable both to current members of the Carol Corps and new readers. 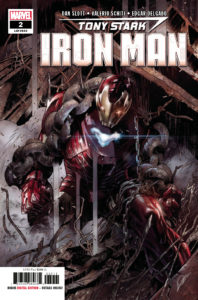 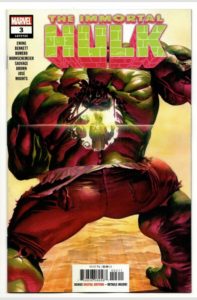 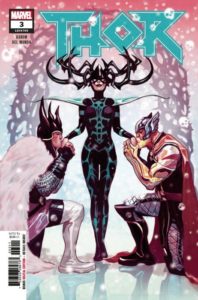 Iron Man #2 continues to set up the new volume’s relationships and problems; there’s a lot of Tony/Rhodey (who gets a big new piece of tech to test-drive), and so far it’s pretty-good Iron Man, at least. The Immortal Hulk is better than that; Al Ewing over the last couple of years, with Ultimates especially, has become a Warren Ellis-style writer: smart, mordantly funny and chillingly violent, with a touch of heart in the middle.  This Roshomon-like tale, with different witnesses’ versions of events drawn by different artists, is a very-cleverly-put- 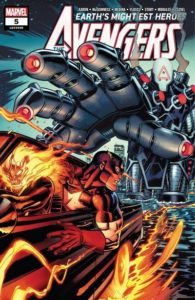 together complete story; the comic-relief bits with the dirtbag bartender, drawn by Paul Hornschemeier, are worth it by themselves.  Thor takes place in Mike del Mundo’s version of the Norse underworld: an icy, cloudy candy-colored realm under siege by fire demons, where Jason Aaron presents a large cast (including four sons of Odin) bickering and cementing alliances to face the common threat. Odds that this volume is mostly going to be a big years-long payoff fight go up considerably with a last-page bad-guy appearance.  Avengers, also by Aaron, is pushing the “cosmically

significant” button a little too hard, considering that the title’s been in non-stop epic mode for over a year, but it’s an intriguing group of characters (a more-physical, less-intellectual She-Hulk gets along surprisingly well with Thor), and you can’t accuse anyone here of thinking small: the giant-size bits at the end work particularly well.  Runaways is its opposite, small-scale and human; one main plot point is a character deciding to change her hair, and it works because writer Rainbow Rowell is so observant and so empathetic.  Its clear-eyed take on its teen cast is YA gold, and if Marvel can just let it produce another arc or two, it might just to be able to find and grow its audience, and settle in for a long run. 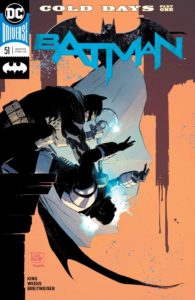 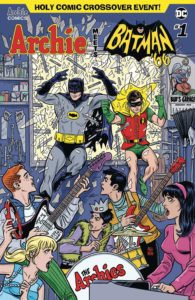 Batman, after all the wedding hoo-hah, starts a Twelve Angry Men-type Mr. Freeze story; good on King for not taking the obvious Batman’s-so-depressed route, and instead showing Wayne’s mental state subtly, through having him report for jury duty and through the flashbacks involved with that. It’s an interesting and unexpected arc, the kind of swerve that King’s become increasingly good at, and an encouraging indication of what his last 49 issues on this title will be like.  Archie Meets Batman ’66 is the opposite of that story in every way, except for its featuring a version of the Caped Crusader; once you have the book’s title, and the fact that 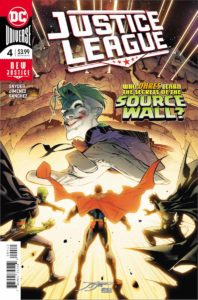 longtime Archie artist Dan Parent is drawing it, you’ll know just where it’s going. It does a decent job getting there, too, for what it is — my only regret is that cover artist Michael Allred  couldn’t have contributed something on the inside, too.  Justice League continues its Scott Snyder-scribed big multiversal cosmic thing, with some of the JL members going to the dark side and others beset by the Legion of Doom; as with Avengers, it would be nice to see a couple of small-scale tales in this title once in a while, instead of constant widescreen chaos — but it’s undeniably interesting, and since the big stories have been selling well for both 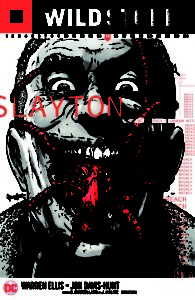 companies since Crisis and Secret Wars back in the ’80s, they aren’t likely to stop any time soon. I’ll buy pretty much anything by Warren Ellis, so The Wild Storm has been an easy sell — he used to chronicle the Stormwatch/Authority Wildstorm adventures back in the day, and his mix of smart technical/black-ops stuff mixed with good and bad people doing noble and horrible things (sometimes with readers not able to tell which is which) always has a grim kick to it; committing to a two-year monthly story has made it dependable, too, and 5/8ths through the schedule they haven’t missed an issue yet. 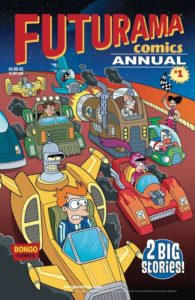 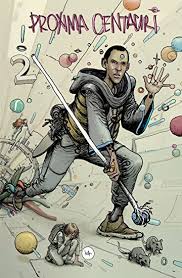 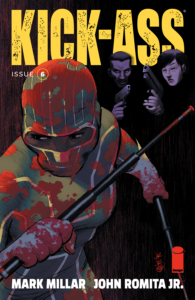 The Futurama physical comic was cancelled with issue #81 in 2016, but last year Bongo published #82 and 83 as digital-only stories; those are what are reprinted in this week’s Futurama Annual. The first, “Burning Mom,” is a parody of guess-which festival, and deals with Fry feeling old (well, he is over a thousand…) and out of touch; the second, “Bendocchio,” is a Bender origin mixed with a Pinocchio parody. If you’ve missed the comic — or the show — then these two full-length stories should make you happy. Proxima Centauri is by Farel Dalrymple, and that’s mostly all you need to know; you’re either a fan of his unique style or not. If you’re on the fence, it’s an 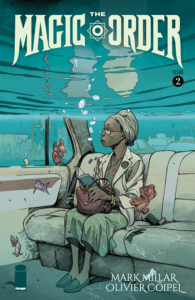 sf/fantasy story, involving both science and magic and following a young wizard — but it really seems to be about alienation and teen angst, with the setting substituting for the horrors of high school. Definitely pick it up: you’ll know after a couple of pages whether you want to buy it  Two books by Mark Millar are out: Kick-Ass ends the first arc with its new character in the suit: an ex-Army single mom who’s a lot more familiar with guns and other lethal weaponry than Dave, the first guy, was — and a good thing, since she has no Hit Girl around to do the heavy lifting in those areas. John Romita Jr.’s art makes it worth buying — meaning that next issue, when both Millar and Romita Jr. 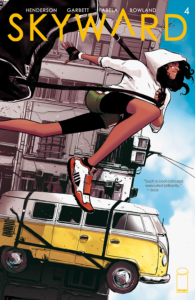 are replaced by the new team of Steve Niles and Marcelo Frusin, may be a good time for a lot of fans to jump ship.  The Magic Order has nice art, too — by Olivier Coipel — but it’s basically  Millar coming up with a bunch of magical ways for the unstoppable bad-guy magicians to take out their rival good-guy ones; will the viewpoint character be able to defeat the seemingly-unstoppable villains through a combination of pluck, refusal to give up and incredible dumb luck? Since that’s basically what happens in every single Mark Millar comic, I’m guessing the answer’s going to be “yes….”  Skyward continues to milk its high-concept premise — that, a decade or two ago, 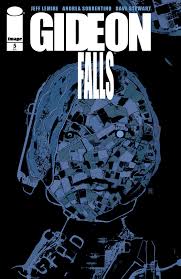 Earth lost most of its gravity — in imaginative and visually-compelling ways: witness here what happens to rainstorms in low-G environments, and note all the different ways the various characters have coped with a world where the biggest danger isn’t falling down… but falling up; good-looking art and tight writing make this a comic to watch.  Gideon Falls starts to deliver some payoffs in its fifth issue, as the denizens of the title village have to cope with an otherworldly “black barn” whose appearance signals disaster — the small-town characterization and air of creeping dread continue to make it feel like a good Stephen King novel, and fans of that

kind of horror should give it a look. Mage, meanwhile, hits the 2/3 mark of its third and final volume by giving us glimpses of three character sets: main monster-fighter Kevin and his daughter Miranda, on the road dodging danger and searching for their loved ones; mother Magda and son Hugo, caught by the enemy but far from helpless; and the Umbra Mother and her minions, trying to kill them all and take power for themselves, but fighting their own internal and external distractions. Matt Wagner’s been at this a long time, and his ability to mesh all three stories seamlessly, with clear art that’s good at both the small conversations and the big action/magical sequences, makes it a comic worth reading, too.

With 40 years of experience in comic reading, collecting and reviewing, English Professor Phil Mateer has an encyclopedic mind for comics. Feel free to ask Phil about storylines, characters, artists or for that matter, any comic book trivia. He will post your questions and answers on the AABC blog. His knowledge is unparalleled! He is also our warehouse manager, so if you are looking for that hard to find comic book, ask Phil!
View all posts by Phil →
This entry was posted in New Comics, Reviews and tagged Archie, Avengers, Batman, Captain Marvel, Fantastic Four, Futurama, Gideon Falls, Hulk, Iron Man, Justice League, Kick Ass, Mage, Magic Order, Proxima Centauri, Runaways, Skyward, The Wild Storm, Thor. Bookmark the permalink.