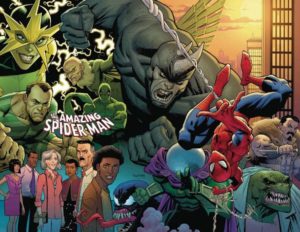 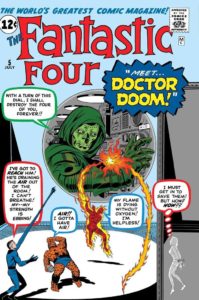 Amazing Spider-Man‘s latest volume gets a double-sized first issue; new writer Nick Spencer titles it “Back To Basics” (a callback to John Byrne’s Fantastic Four #232…), and he’s not kidding, and it’s surprisingly good —  you might think they’re piling 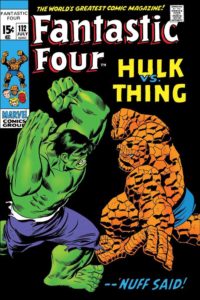 on too much Parker misfortune in the beginning, but there’s a payoff.  Ryan Ottley got a lot of practice at drawing Marvel-style super-heroics during a long run on Robert Kirkman’s Invincible, and it shows; he’s got an almost-but-not-quite-too-cartoony style on the personal stuff (it works because it’s so good at expressing emotion), but the action sequences can really pop, especially with Laura Martin’s skillful coloring; there’s a page with the Human Torch that’s  just textbook gorgeous. Add in a ten-page Humberto Ramos story that sets up some future plots, and a two-page after-credits scene that sets up next issue, and this is doing everything it can to keep current fans and add new ones.  The “True Believers” $1 reprints continue to spotlight the Fantastic Four; the Doctor Doom one reprints Fantastic Four #5, and is a gem-perfect example of early-Silver Age Marvel’s Stan Lee/Jack Kirby combination of comedy, adventure and invention (when you’re

reading it, count the number of objects, people and concepts that the company’s still mining today), while the Hulk vs. Thing sees Lee, almost at the end of his FF tenure, giving Kirby replacement John Buscema, just starting his own long association with the title, plenty of cool action to draw; that cover, with its startling black background, tells you everything about it you need to know. The third reprint, Galactus Hungers, from five years later, has Buscema partnered with writer Roy Thomas, and is a good example of the FF’s second-generation mid-Bronze-Age era, with the High Evolutionary and Galactus duking it out over Counter-Earth, and a surprise green guest star (who isn’t the Hulk) providing comic relief. 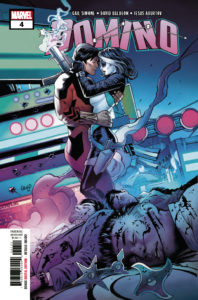 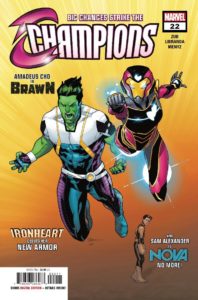 If you were a fan of Gail Simone’s Secret Six, or her earlier  Birds of Prey, you should like Domino just fine; it’s a similar blend of sleek action-adventure spiced with themes of family, temptation and betrayal — and not a little comedy, which Baldeon’s art 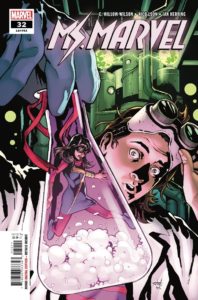 portrays just right. Champions sees newish writer Jim Zub having to follow series originator Mark Waid’s two-year tenure while dealing with legacy changes in the Hulk and Iron Man comics that affect two of his main characters; he does a workman-like job of it, keeping the personalities recognizable and the many group inter-relationships percolating, with the Vision/daughter Viv one getting particular attention.  Ms. Marvel starts a new arc and offers a good 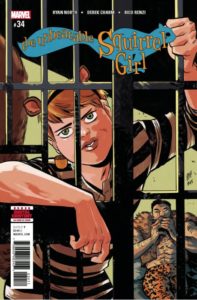 jumping-on point to its charmingly-earnest, very-well-constructed YA series; not that they’re the only audience, but if you know any early-teen girls you’d like to introduce to comics, this would be a good choice.  Squirrel Girl’s in the middle of a three-part story about how Kraven the Hunter can’t just decide to be a better person and expect everybody to just forgive his last 50+ years (or, what, ten in Marvel time?) of super-villainy; it’s cleverly worked out and shows heart in a couple of places, and Ryan North makes a case for getting a Spider-Man title by nailing the wallcrawler’s dialogue in his last-pages guest appearance. 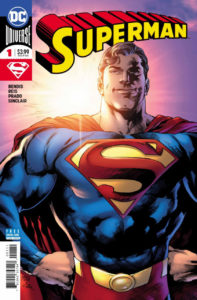 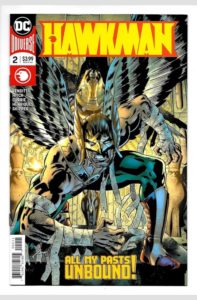 Superman #1 sees writer Brian Bendis continuing threads from the end of the Man of Steel mini-series, with a new Fortress of Solitude replacing the one that was destroyed there, Clark still bacheloring it while Lois and Jon are out of town (way out of town…), a conversation with the Martian Manhunter that seems to be playing off of developments over in Scott Snyder’s Justice League title, and a last-page cliffhanger hat you can’t accuse of thinking small. Nothing revolutionary, but very solidly done; Ivan Reis’s art is pretty and competent, and pays off nicely on a couple of big splash pages, and, like Amazing Spider-Man #1, this 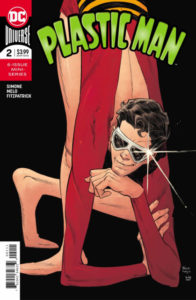 should do its job of retaining both previous readers, and  any new ones attracted by the hype.  Hawkman continues to benefit from Bryan Hitch’s lush, crowd-pleasing superhero art (he gets in a good-looking double-page splash, too, although it’s basically just a pin-up), which entertains readers while writer Robert Venditti deals with the problem facing all Hawk-scribes — the character’s complicated backstory — with some time travel and some streamlining; check back after this first arc’s over to see if it worked. Plastic Man, on its own sophomore issue, continues with Gail Simone (her again…) as writer; befitting the title’s history, she dials up the comedy, but she 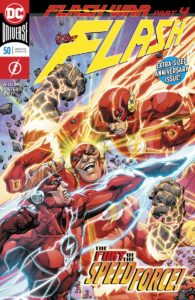 also plays up Plas’s criminal history and outsider status, and the result’s still as good a version of the character as anybody since Kyle Baker. The Flash hits a milestone issue, with a Barry/Wally team-up/fight against, of course, Zoom; there’s lots of speed force action, mixed in with the continuing mystery of what happened to the DC universe’s missing five years (and people), plus the reintroduction of a Flash family member in the coda. Howard Porter’s one of those artists who doesn’t draw anything spectacularly, but draws everything well, and his straight-down-the-middle superhero style is particularly effective here;  this has quietly been one of the steadiest, most consistently engaging titles of the Rebirth era. 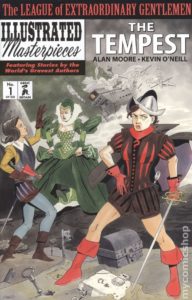 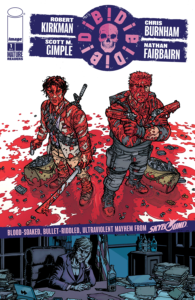 Alan Moore and Kevin O’Neill begin the fourth, and last, volume of their long-lived, influential and critically successful League of Extraordinary Gentlemen series this week with LOEG: The Tempest.  Even more than most, this is a series that needs to be read from the beginning, or you’ll have no hope of understanding what’s going on, so at a minimum get the first three collected editions (plus, if you’re a completist, The Black Dossier and Nemo), and tackle those first; you might also want to Google LOEG and “annotations,” since they’re all crammed with sometimes- 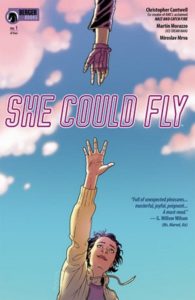 obscure British pop-cultural references from the 19th, 20th and 21st centuries.  That makes these sound like work, but they’re actually smart, very well-told, funny and spine-chilling in equal measure, so they’re totally worth the effort.  Die!Die!Die! is a surprise new series from Robert Kirkman (they withheld announcing its existence until this week, when the first issue came out); as the title and cover might suggest, it’s an violent super-spy tale about a secret government organization that targets people for assassination — but only if they really really deserve it (usually…). Chris Burnham’s used to working with high-profile writers (he collaborated with Grant Morrison on both Batman and Nameless), and he handles both the action and the over-the-top scenes (like a guy getting his nose cut off) well here; getting the first issue of a new Kirkman continuing series is pretty much a no- 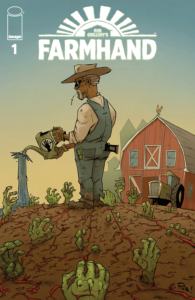 brainer for many comics fans, and, honestly, almost no one knew about this one until it showed up with all the other Wednesday books, so get it while you still can.  She Can Fly is a new series published by former Vertigo editor Karen Berger’s new “Berger Books” Dark Horse imprint; it’s written by Christopher Cantwell, the co-creator of the AMC series Halt and Catch Fire, and it’s about a teen girl with OCD who’s dealing with her obsessions while the rest of the country’s talking about a mysterious flying woman who keeps being spotted up in the sky. Its young, outsider narrative and magical-realism plot make it distinctly Vertigo-y; Cantwell talks in the editorial material about growing up with “Pure O” OCD himself, so that gives an added realism to the script, and while it doesn’t reveal a lot of its world yet in this first issue, there’s plenty to bring readers back for more. 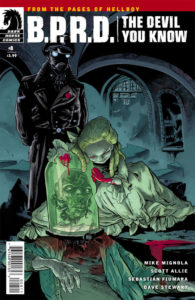 If the uniquely-cartoony art in Farmhand looks familiar, that’s because it’s by Rob Guillory, who spent five years drawing the cult-favorite Chew for Image.  That book was written by John Workman, and here Guillory’s both artist and writer, but Farmhand still has a lot of Chew‘s offhand weirdness and off-kilter comedy/drama rhythms; it’s about a scientist/farmer whose biological breakthrough allows human organs to be grown like rutabagas, corn or any other farm crop — planted, watered, harvested (hence the cover image) — and what happens afterward. Decent worldbuilding, with hints that things are more sinister than they seem.  Add a point for a panel of a little girl that looks like it was copied from a Jill Thompson Scary Godmother comic; Thompson isn’t an obvious Guillory influence, but once you look 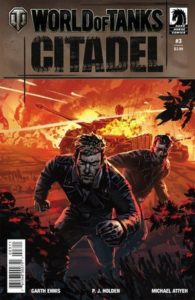 it actually makes a lot of sense…. Meanwhile, B.P.R.D. is winding up a surprisingly long run — 155 issues and counting — with Hellboy, fresh from hell, back on board and the apocalypse either coming or not; the book’s looming discontinuation makes either outcome possible. World of Tanks: Citadel, based on the video game, is a Garth Ennis war comic about Russian and German tank forces during the 1943 Battle of Kursk.  Even though it’s the third of five chapters, you can pick it up and get absorbed in the characters’ struggles to survive; that’s the secret that’s always driven the best war comics, from Harvey Kurtzman to Robert Kanigher, and it’s what makes Ennis so good at them, too.

With 40 years of experience in comic reading, collecting and reviewing, English Professor Phil Mateer has an encyclopedic mind for comics. Feel free to ask Phil about storylines, characters, artists or for that matter, any comic book trivia. He will post your questions and answers on the AABC blog. His knowledge is unparalleled! He is also our warehouse manager, so if you are looking for that hard to find comic book, ask Phil!
View all posts by Phil →
This entry was posted in New Comics, Reviews and tagged B.P.R.D., Champions, Die!Die!Die!, Domino, Fantastic Four, Farmhand, Flash, Hawkman, League of Extraordinary Gentlemen, Ms. Marvel, Plastic Man, She Could Fly, Spider-man, Squirrel Girl, Superman, World of Tanks. Bookmark the permalink.