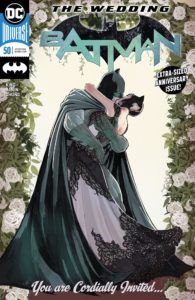 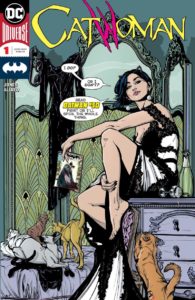 Batman #50, as a wedding issue,  doesn’t exactly give us what we want, but it might give us what we need — writer Tom King has said that he began his tenure with a hundred-issue plan, so here at the halfway point he ends with a head-turning plot twist, and a last page that will be pored over by readers who’ve been with this title since its “Rebirth” launch; besides that, there are a ton of special Bat/Cat art pin-ups by, among others, Neal Adams, Frank 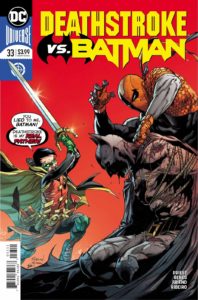 Miller, Amanda Connor, Tony Daniel, Tim Sale, Paul Pope, Andy Kubert, Joelle Jones and Jim Lee, and a sophisticated parallel-narrative story that earns its impact: more than enough to bring us all back for those final fifty episodes.  Catwoman‘s relaunch of her own series almost matches it, all on the strength of its writer/artist, Joelle Jones, whose Lady Killer showed her aptitude for exquisitely-drawn high-fashion women who can kick ass and take names; her cover to the first issue, up to the left there, should give you all the reason you need to check it out (click on it to get a larger version…).  Deathstroke #33, as its own cover shows, is the penultimate chapter of a Slade/Batman/Robin fight, with those

two-and-a-half strategic masterminds employing, not just twists, but triple-crossing quadruple-counter-twists; writer Christopher Priest is great at all the heady maneuvering, and the interactions between Damian “Robin” Wayne and  Deathstroke make it even more entertaining.  Justice League, in the middle of its first Scott Snyder-written arc,  is deep-diving  into the understructure of DC cosmology, with the events of Dark Nights: Metal having broken the multiverse and opened a door to some Very Bad Things; what’s cool about this is that it takes all that complicated cosmic kerfuffle and overlays it on a Saturday-morning cartoon version of the League, who are back to having a Hall of Heroes and a Lex Luthor- 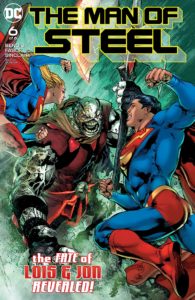 led Legion of Doom to contend with, too; those two components, which in most other hands might have made a mess, here blend into a smart sweet-and-sour sauce that sees the cosmic stuff giving weight to the heroes, and their iconic representations giving a buzzy energy to the heavy plot. Some of the same dynamic is working over in Man of Steel, where new Superman writer Brian Michael Bendis finishes up his first DC mini-series having introduced a new bad guy and a number of bubbling subplots; his take on the various Super-cast characters, and their relationships, is a smart enough mix of the classic and contemporary to drive everyone over to his upcoming issues of both Action Comics and Superman, just to see what he’ll do next. 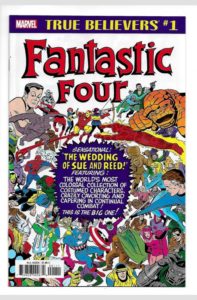 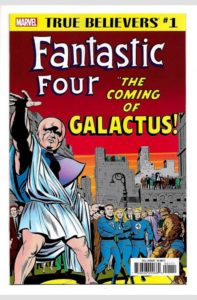 Marvel’s reviving its once-flagship Fantastic Four title next month, so they’re giving it the $1 “True Believers” reprint treatment; the double offering this week features two of the top ten creators in comics, Jack Kirby and Stan Lee, at the mid-’60s peak of their collaborative powers. The first is, coincidentally, enough, a wedding issue: Reed and Sue getting married in Fantastic Four Annual #3; it features practically every character of the then-current Marvel 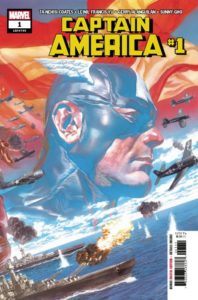 universe, as Doctor Doom uses a mind-control gadget to get his super-villain counterparts to crash the ceremony in wall-to-wall almost-3D action — Kirby even gets in one of his splash-page photo-collages, as the Watcher and Reed Richards travel through the “fourth dimension,” and Stan and Jack themselves make an appearance. Then, there’s probably the most-famous FF comic ever published, from Fantastic Four #48, just a year later, introducing both the Silver Surfer and Galactus. If you’ve never read these, you have to; it’s like being a movie fan and never having seen Casablanca, and now you can do it for just $2.  Captain America #1 begins Ta-Nehisi Coates’s version of that 75-year-old-plus Marvel creation:  After two years on Black Panther, his comics storytelling skills have grown

considerably, and he’s got a fan’s grasp of continuity and an essayist’s sense of theme; this is following a really good Mark Waid/Chris Samnee version that just concluded, and it holds its own.  The other two debuts this week are both written by hot newcomer Donny Cates; Cosmic Ghost Rider spins off that breakout character introduced in Cates’s just-concluded Thanos run, while Death of the Inumans involves just that: Marvel’s winnowing of its much-hyped,  seldom-purchased line of Kree-spawned mutations that the company had hoped would substitute for their Sony-owned X-Men ones. Cates has a cheerful,

imaginative everything-but-the-kitchen-sink grindhouse movie approach that reminds me of Jason Aaron: his Cosmic Ghost Rider has an origin, powers and half-crazy dialogue that should appeal to pretty much any 15-year-old, while Death of the Inhumans  opens with an atmosphere of creeping dread that it never relinquishes, and slaughters enough of its title race — including lots of nameless cannon fodder, but also a couple of big names you wouldn’t  expect — to satisfy even their most-bloodthirsty critics (although, based on merchandise potential alone, at least one of the two surprise kills on the last page isn’t very likely to actually be gone…). 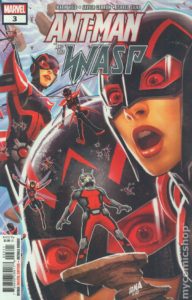 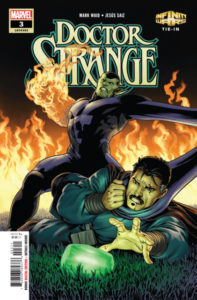 Speaking of Mark Waid, while he’s no longer scribing Captain America, he’s still producing a lot of good Marvel comics; two,  Ant-Man and the Wasp and Doctor Strange, are out this week. Both currently involve their leads encountering alien civilizations; in Ant-Man and the Wasp, it’s in the microverse, as Scott and Nadia are lost and encountering well-worked-out quantum-related size and physical changes trying to get back home. Javier Garron’s aliens are suitably weird (while Waid’s characterization makes them simultaneously relatable), and the sometimes-bickering, always-heroic

duo’s adventures are zippy and fun. Doctor Strange sees Strange roaming the universe trying to get his lost magical powers amped back up, with an alien partner who’s also both mystically and scientifically inclined; they encounter the Super Skrull, who’s got an infinity gem, tying this into Marvel’s summer Infinity Countdown/Infinity Wars uber-plot. Waid continues the current trend of making the good doctor something of a jerk — but understandably so, since he’s willing to sacrifice almost anything to get his mojo back and protect the earth — and getting him off-planet allows for change-of-pace stories instead of just the same old cast and situations, so it all works out well. Over in the Avengers relaunch, Jason 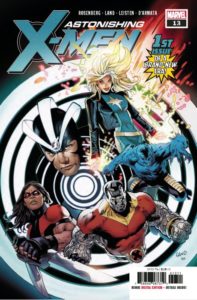 Aaron is continuing his initial arc involving dead Celestials, looming cosmic menace, and the history of the earlier, Odin-led Avengers of 1,000,000 BC; those kinds of widescreen concepts are typically Aaron — and not unexpected, considering that the title’s ramping up to its big 700th-anniversary issue.  Astonishing X-Men starts a new arc with a new lineup and a new creative team; it involves Havok, on the outs with the mainstream super-hero community since he got mind-altered and became evil a few years ago (he’s better now, but still…) putting together a new team; only the Beast features in this issue, but you can see the rest of the lineup on its cover 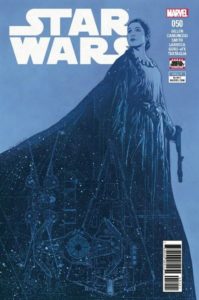 anyway; if you liked the darker, more offbeat feel of the Sabertooth-led last iteration of Uncanny X-Men, you should like this too.  That leaves Star Wars, whose writer, Kieron Gillen, is no stranger to the Lucasverse (he wrote the first 25-issue Darth Vader run, and has been on Doctor Aphra from the beginning); here, he’s been building to this week’s 50th issue, and the story transitions from being an epilogue to A New Hope to a prologue to The Empire Strikes Back, with lots of Vader-led destruction and pyrotechnics; there are also a couple of anniversary perks, including a cover gallery, so it’s a good time for lapsed fans to check back in. 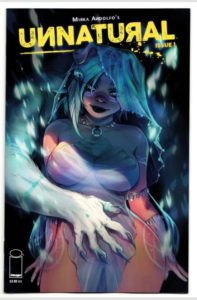 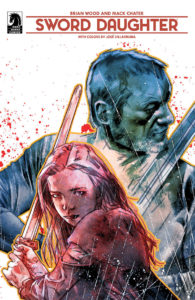 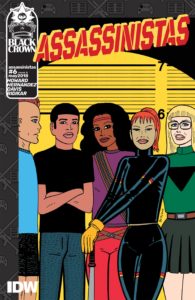 Unnatural, the indy debut of note this week, is by the Italian artist Mirka Andolfo, who’s pencilled issues of Wonder Woman, Harley Quinn and Bombshells for DC, among others; it’s a gorgeously-drawn anthropomorphic fantasy about a 20-something waitress, and her friends, dealing with life under a totalitarian government, and a 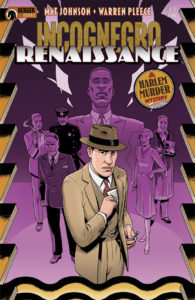 look at the cover up to the right there will give you a good taste of her skillful, sexy style.  Sword Daughter continues Brian Wood and Mack Chater’s tale of a young girl and her father looking for revenge on the gang who looted and destroyed their village, and family; it’s set around the Viking world during the first millennium, an era that Wood’s mined before in works like Northlanders, and if you liked that Vertigo series (or the later Black Road), you’ll like this too.  Assassinistas concludes its Black Crown mini-series about 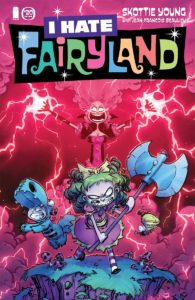 a trio of women mercenaries and their tangled relationships; it’s drawn by the mighty Gilbert Hernendez, which gets it an automatic buy, especially considering the way author Tini Howard uses its women, guns and B-movie action to play to his strengths.  Incognegro also offers a conclusion, to Mat Johnson and Warren Pleece’s second series about a 1920s-era Harlem reporter who’s black, but can pass for white; if you like historical murder mysteries with lots of careful research and characterization, it’s worth a look.  I 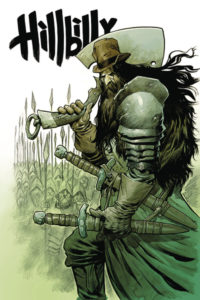 Hate Fairyland offers a conclusion, too; after twenty issues, creator Skottie Young brings his tale of a girl trapped in the title realm for forty years — never growing older, but growing increasingly murderous — to an end.  Amidst all the slapstick humor and over-the-top cartoon violence, it shows some actual heart, and leaves the door open for a sequel;  if you’ve read any earlier issues, this is a last chance to check in and see how it ends.  Hillbilly is Eric Powell’s story about a blind, backwoods version of Conan

the Barbarian, armed with a giant iron cleaver and battling witches, goblins, demons and other haunts; he uses his lush EC comics-influenced horror style, honed on his earlier The Goon, to great effect.  Xerxes is a prequel/sequel to Miller’s 300; instead of concentrating on just the battle of Thermopylae, as that series did, it sprawls across 150 years of the Greco-Persian Wars. If you don’t already know the history of that period, lots of luck, because Miller doesn’t offer any kind of primer on it; he just hits the high points, but his battle layouts and graphics are so uniquely composed and energetic that they carry the 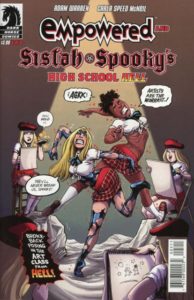 story along. That leaves Adam Warren’s long-running Empowered, offering the penultimate issue of its annual mini-series; here, too, the graphics are a lot of the attraction, because Carla Speed McNeil doing a (literal) high-school hell, especially when combined with Warren’s snarky dialogue and knack for satire, makes it worth reading. If you’ve been following this quirky look at superheroines, one that preceded the #MeToo era but definitely taps into its spirit, you’ll be happy, although at this point, five issues into the six-issue series, it might be better for new readers to wait for the collection — or, better yet, check out Warren’s extensive back catalogue.

With 40 years of experience in comic reading, collecting and reviewing, English Professor Phil Mateer has an encyclopedic mind for comics. Feel free to ask Phil about storylines, characters, artists or for that matter, any comic book trivia. He will post your questions and answers on the AABC blog. His knowledge is unparalleled! He is also our warehouse manager, so if you are looking for that hard to find comic book, ask Phil!
View all posts by Phil →
This entry was posted in New Comics, Reviews and tagged Ant-Man, Assassinistas, Avengers, Captain America, Cosmic Ghost Rider, Doctor Strange, Empowered, Fantastic Four, Hillbilly, I Hate Fairyland, Incognegro, Inhumans, Star Wars, Sword Daughter, Unnatural, Wasp, X-men, Xerxes. Bookmark the permalink.