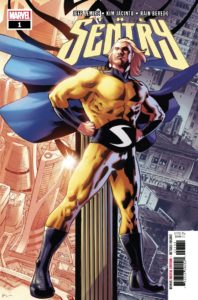 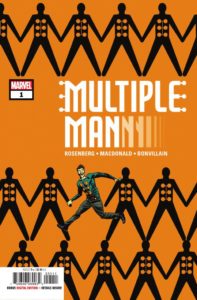 Sentry is a new Marvel ongoing series by Jeff Lemire (who seems to write two or three books every week), about that fairly-recently-created character with Superman-like powers, and a long (retconned) history; his catch is that using his abilities makes his subconscious create a separate character, The Void, who’s just as formidable as he is, but whose goal is to destroy the universe. A tangled psychological dilemma like that plays to Lemire’s strengths, and how it’s worked out here looks to be the engine of the first arc; artist Kin Jacinto has a loose, expressionistic style that’s just OK with 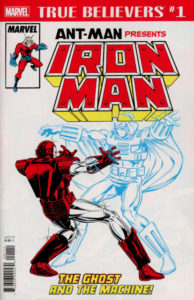 the quieter, conversational parts, but brings a lot of energy to the superhero stuff, so on balance it works well. There’s nothing here yet to make readers gasp, but it’s solidly built;  Lemire’s involvement makes this first issue at least worth a look. Multiple Man, as a mini-series, requires a much smaller commitment, and writer Matt Rosenberg (last seen on Phoenix: Resurrection, Secret Warriors and Punisher) makes it easy to like; he takes the character’s cascading-duplicate powers and doubles down on them via time travel. Peter David, who had a long run with the character as the leader of his X-Force run, made him smart and analytical enough to be a detective, and cynical and mouthy enough to be fun; Rosenberg looks to 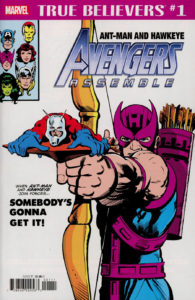 be keeping those qualities here, and that should make this a good story. Meanwhile, two more of Marvel’s $1 “True Believer” reprints of Ant-Man appearances are here: the reprint of Iron Man #219 is welcome, because that’s the first appearance of movie villain The Ghost, and $1 is better than the $20 that book’s currently demanding; both that and the Avengers #223 reprint (with its iconic cover of Scott Lang riding Hawkeye’s about-to-be-launched arrow) are written by David Michelinie, who co-created the Lang character and established his personality and background during both his Avengers and Iron Man runs in the /’70s/’80s (although you can’t tell that in the Iron Man reprint, because Marvel screwed up and dropped the creator credits…). Finally, Amazing Spider-Man: Wakanda

Forever #1 is one of those title-hopping trilogies that crosses over into three team-up issues: Spidey this week, followed by an X-Men: Wakanda Forever in a month, and concluding with a similar Avengers-themed comic after that; it’s got, not T’Challa himself, but the Dora Milaje in New York City battling one of their former colleagues.  The writer, Nnedi Okorafor, is both a Hugo and Nebula-winning sf/fantasy writer, and, while her Nigerian heritage gives her insight into the African characters here, she’s also good at nailing Spidey’s breezy, quip-filled dialogue; artist Albuquerque has a little of Riley Rossmo’s fluid style, and the visuals deliver the action and emotion effectively, so fans of both Wakanda and Peter Parker should find enough to like here. 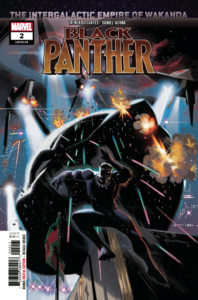 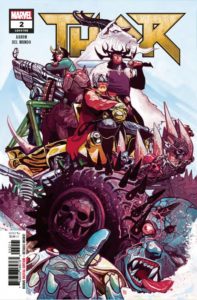 Speaking of Wakanda, the new volume of Black Panther has deposited us, without prequel, in the “Intergalactic Empire of Wakanda,” with T’Challa as a freedom fighter going full Star Wars on them.  The connection to “our” Panther is there somewhere, but hasn’t been explained yet;  Coates seems to know exactly where he’s going, though, 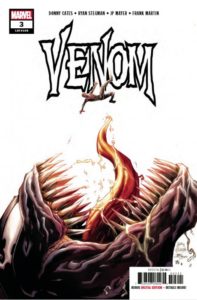 and that confidence in the narrative, earned over the last two years writing the character, propels the tale and makes it work. Thor, also on the sophomore issue of its latest volume, sees Thor and Loki journeying to Hel to try to stop the Dark Elf Malekith’s plot to take over/burn all ten universal realms; it being the Norse hel and not, you know, “hell,” they encounter a number of dead Asgardians, including current ruler Balder, fellow-Odinson Tyr, and Karnilla. Aaron turns up the humor a notch, which works well, and del Mundo’s dense, expressive, painted art repays close examination, and gets off a couple of impressively-designed effects. Venom hits the 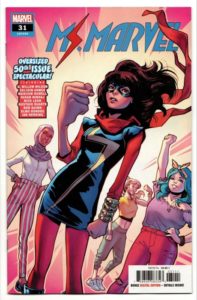 halfway point of its arc delving into the alien symbiote society and its long-ago cosmic origins, with Donny Cates using his new-guy perspective to come up with a couple of ideas about Eddie Brock and his costume/partner no one else ever has: the mark of a good writer. Ms Marvel hits the fiftieth issue of its Kamala Khan incarnation with a double-sized jam issue featuring all those writers and artists listed in the credits; it’s all based around G. Willow Wilson’s vision of the character, though, and the simple slumber-party-interuptions plot, with its beats giving graceful admission to the various guest writers, and its surprising conclusion, shows all the charm and strong themes that have made this such a hit with teen audiences. 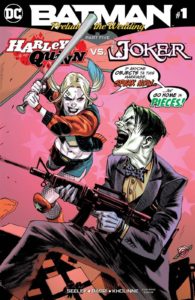 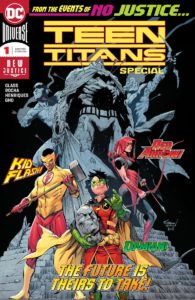 The last of the Batman “Wedding Preludes” is out this week (fortunate, since the wedding itself, in Batman #50, comes out this Wednesday, July 4, the same day as our *plug* Big Annual Sale *plug*), and it saved the most commercial story for last: Harley Quinn vs. the Joker. Of course, that’s a fight that isn’t going to get any resolution (and it probably isn’t a spoiler to note that it ends with the Joker about to enter that church that’s the setting for Batman #48-49), but Tim Seeley shows a good grasp of both Harley’s and the Clown Prince of Crime’s psychologies, and it’s a matchup that’s hard to resist (side note: those nuptials, at this point, look like they have less than a fifty percent chance of actually happening; I’ll bet DC wasn’t pleased when X-Men Gold #30 took the same swerve with its wedding two weeks earlier…).

Teen Titans Special, like last week’s Titans Special, sets up a reorganization of that now Damian-Wayne-led group, with backstory setting up the circumstances behind both the returning members, and a couple of new ones; it’s effective at its job of generating interest in the book’s new direction, and acting as a jump-on point for new readers.  Man of Steel’s penultimate issue opens with a wordless Superman/Big Bad Guy fight, cuts to more about where Lois and Jon are, looks at the Justice League in the aftermath of those events, and ends on the cusp of an even-bigger fight: it’s briskly entertaining, and the best of these yet, with the JL interactions indicating that Bendis may actually be good at chronicling these DC characters; the final issue’s out next Wednesday, along with Batman #50 and Captain America #1 (because July 4…), making that new-comic day even bigger than usual, and leading into the 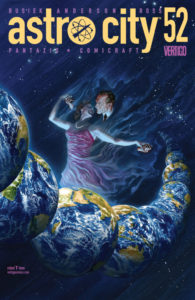 relaunch of the two main Superman books. As they begin, another series ends: Astro City #52 is the last monthly installment of that long-lived, very high-quality look at superheroes (over 100 issues, spread out over more than 20 years); it’s not disappearing, but moving to a series of stand-alone graphic novels.  This final installment’s worth a look just to acknowledge Kurt Busiek and Brent Anderson’s rock-solid storytelling and character creativity; like many of its stories, it focuses, not so much on the shiny heroes, but on the ordinary people who have to deal with them: that’s the humanity that’s always been at the heart of its appeal. May it find success in its new form for many years to come.

There weren’t any first issues of note for the indy titles this week, but there were a couple of conclusions — two of entire series, and one of a story arc. Kill or Be Killed is one of the true conclusions, as Ed Brubaker and Sean Phillips’s

latest crime drama reaches its end; no sense buying this if you haven’t been following it all along (unless you just like to read endings), but, with its tight plotting and confident, realistic art it’s been their best collaboration yet — and, after almost fifteen years of working together, that’s saying something; get the trade collections of this tale about a vigilante who may or may not be demon-driven, and enjoy it as much as the rest of us have.  Harrow County is ending, too; its story about a back-country girl with mysterious powers, and the dark forces she has to confront, has always been highly readable (by longtime comics writer Cullen Bunn), with compelling characterization and evocative, atmospheric, very good- looking painted art by Tyler Crook (check out what he does with the two simple double-page splashes of a woodland path here); like Kill or Be Killed, it deserves to live a long time in trade form.  Finally, Sex Criminals concludes its latest volume; it’s been chronicling the mid-story breakup of its two leads, Jon and Suzie, so there’s been a lot of angst and character-rich, but slow-moving, action; this has their (mild spoiler, because it was inevitable) reunion, and the  last few pages offers a hard-won joy both for them and for us, their readers; this Matt Fraction/Chip Zdarsky collaboration has been an obvious labor of love from the beginning, and, like the other two titles here, deserves a successful life in collected form for decades to come. 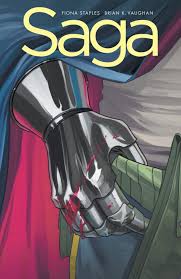 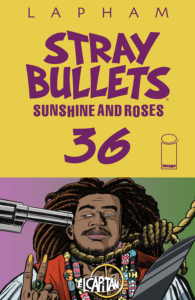 All of the ongoing indy titles in this section are relatively long-lived (the one with the lowest issue number, Stray Bullets, has actually been around the longest, because it’s had a couple of earlier incarnations), so they’re known quantities — especially if you’ve been reading these reviews

for awhile. Saga is one of the top-selling Image comics (beaten only by The Walking Dead), and is a well-written, beautifully-drawn galactic takeoff on Romeo and Juliet, with its lovers coming from warring planets instead of the feuding families of Verona; if you’re any kind of sf fan, you ought to be reading it.  Stray Bullets is a hard-nosed, tough-guy crime drama with unexpected swerves and an elaborate, interlocking cast of hundreds of people — and yet, each individual issue offers its own self-contained story, a tribute to creator 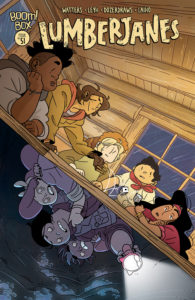 David Lapham’s talent for clear, cohesive storytelling; if you’re any kind of film-noir fan, then it’s the book for you. The Wicked and the Divine is rounding into its final year, and the revelations are coming fast and furiously; this issue’s no exception, and there’s a great big fight to go with it. One of the cool things about comics as monthly serials is the way that seeds planted months or even years ago can pay off; that’s true of Sex Criminals this week, and it’s especially true of Wic-Dev, too.  Lumberjanes has some of that same appeal, as 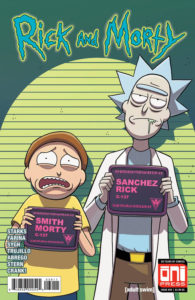 characters we’ve known for the last fifty issues sometimes act just the way we think they should, and sometimes in surprising tangents — just like real people; we don’t know why we should care about a tight-knit group of summer-camping girl scouts, but the magic of good comics is that we do. Rick and Morty is in some ways a mirror opposite: these are mostly naive, or damaged, or even sometimes-horrible people (Morty, Jerry and Rick, respectively), but wondering what they’ll do next, and appreciating their infrequent human or tragic moments amidst all the comedy and slapstick violence, is what keeps us coming back; that’s what makes us fans.

With 40 years of experience in comic reading, collecting and reviewing, English Professor Phil Mateer has an encyclopedic mind for comics. Feel free to ask Phil about storylines, characters, artists or for that matter, any comic book trivia. He will post your questions and answers on the AABC blog. His knowledge is unparalleled! He is also our warehouse manager, so if you are looking for that hard to find comic book, ask Phil!
View all posts by Phil →
This entry was posted in New Comics, Reviews and tagged Ant-Man, Astro City, Batman, Black Panther, Harley Quinn, Harrow County, Joker, Kill or be Killed, Lumberjanes, Ms. Marvel, Multiple Man, Rick and Morty, Saga, Sentry, Sex Criminals, Spider-man, Stray Bullets, Superman, Teen Titans, Thor, Venom, Wicked and the Divine. Bookmark the permalink.