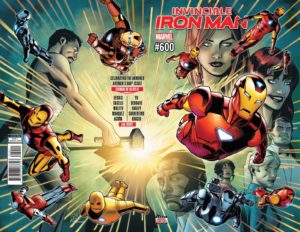 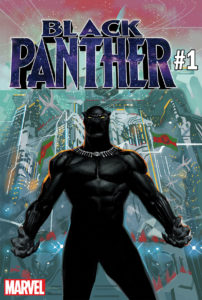 Iron Man #600 is Brian Michael Bendis’s farewell to the Marvel universe after 18 years (Ultimate Spider-Man #1 came out in 2000); as you might expect, it’s giant-sized, with a wrap-around cover, and resolves a bunch of plotlines and tidies up the house, while leaving plenty of threads for the next creative team to tug on. Twelve people are listed as artists (and seven as colorists), many of them associated with previous Bendis books, including Stefano Caselli, Alex 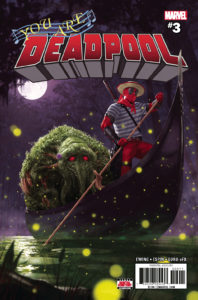 Maleev, David Marquez, Leonil Francis Yu, Mike Deodato Jr, Mark Bagley and Andrea Sorrentino, and there’s a classy two-page editorial tribute to him in the back; if you’ve been a Marvel fan at any point in the last two decades, this will be worth your time.  Black Panther starts a new “season” with an amnesiac T’Challa in outer space, a mine slave on a planet part of the “Intergalactic Empire of Wakanda”; this first chapter just drops us in the middle of that and takes off, leaving explanations for later. Coates, beginning his third year on this book, delivers a self-assured and action-heavy script, with effective emotional beats, and Acuna’s art has a moody, cinematic flow that propels the

story; this does its job of making readers want to come back to see what happens next.  Infinity Countdown: Darkhawk, is a revival of that ’90s property (teen finds an amulet that turns him into an armored space avenger); if you like the cosmic corners of the Marvel universe, with the Nova Corps, the Guardians of the Galaxy, et.al., you should be a fan: Gang Hyuk Lim has a manga-ish style on the people sequences, but morphs into a shiny, detailed techno-realistic one on the hero parts; his Darkhawk glows, and he even makes Death’s Head, of all beings, look good.  You Are Deadpool publishes its third and fourth issues — so, now, you can get all four issues from the stands and play its cleverly- 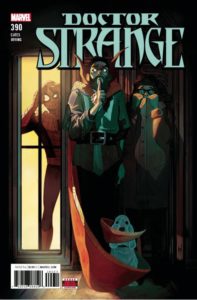 constructed, overlapping find-your-own-adventure game, all of whose paths then lead into the fifth issue finale, out next week: Al Ewing is one of the few writers imaginative enough to pull this off, and Salva Espin handles the whipcrack genre-switching twists and turns with deceptive ease.  Get the whole set, and you should have a great gift for any movie fans wanting to check out the character’s comic-universe adventures. Doctor Strange finishes Donny Cates’s year-long run with a Spider-Man-centric coda (maybe he’s auditioning for a run on Peter’s book next…?); Cates’s Spidey is kind of goofy-Bugs-Bunny-ish at first, but shows his never-give-in optimism, too, and Frazer Irving’s art 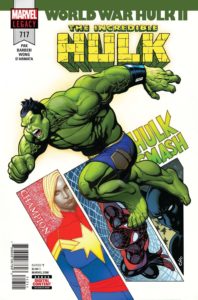 mirrors the changes perfectly — and, when the story gets back to Doc and Zelma at the end, there’s a final, wordless four-page sequence that he just absolutely nails; throw in Bats the ghost dog (and his and Peter’s mutual-admiration society), and this is a more-then-satisfying conclusion. Incredible Hulk ends, too, with the Amadeus Cho version getting this last issue before turning the book (next called The Immortal Hulk) over to Bruce Banner, as chronicled by Al Ewing and Joe Bennett; Greg Pak’s been writing Cho’s adventures since he created him back in 2005, and he does well by him here, leaving him stable, happy and ready for use by other creators. 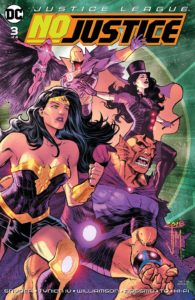 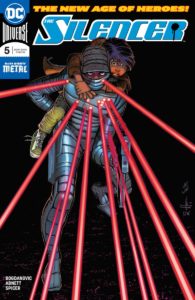 No Justice, it’s quickly becoming clear, doesn’t so much end as serve as a beginning to the new Justice League comic, and the kickoff to a year-long “the DC universe is dying” event (how this will tie in to their other big DC universe event, the long-delayed Doomsday Clock, isn’t explained). If you’re looking for a full story, instead of the opening salvo of a longer one, you’ll be disappointed — but, there’s some cool Riley Rossmo art (also unexplained: why he’s doing the art, instead of the announced Francis Manapul… but Rossmo’s always worth a look), and there’s dozens of heroes and villains, and at least one planet blows up real good, so there’s enough to recommend it, especially considering the way it’s going to influence future books.  Silencer‘s first few issues had 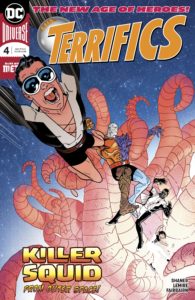 seemed to be getting by on the John Romita Jr. art, but he’s been gone for two months now, and the story, about a single mom who’s a former black-ops star who was part of Talia Al-Ghul’s Leviathon organization, and now is getting pulled back — has continued to be exciting and easy to like; it’s time to credit scripter Dan Abnett, who’s also turned around Aquaman and made it very readable lately, too, for knowing just how to combine characterization, clever plotting, and, in this issue, an action-filled cliffhanger ending.  The Terrifics continues to be a well-paced group comic, with an effective mix of action and humor (the Metamorpho/Plastic Man bickering — and 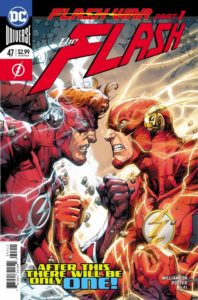 power combinations — are particularly fun): no surprise, given writer Jeff Lemire’s skill set; Doc Shaner’s art is clear, good at all that shapeshifting stuff, and works well on the facial expressions, too, and this is an entertaining, above-average superhero comic.  Flash is, too — Howard Porter’s art has much the same clarity and basic competence as Shaner’s, and this issue begins a “Flash War” arc, with Wally West wanting to break the Speed Force to get his family back, while Barry Allen thinks that’s a bad idea; throw in the logical bad guy, and this is a good opportunity for lapsed readers to check back in on what’s been one of the steadiest Rebirth relaunches. 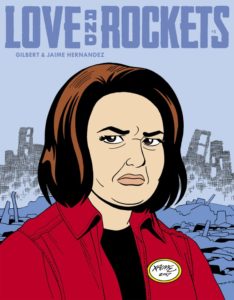 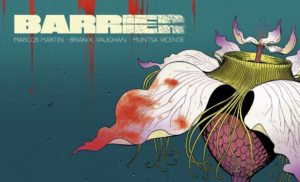 A new Love and Rockets is always cause for celebration; Jaime and Gilbert Hernandez have been two of the best cartoonists on the planet for going on four decades now, and show no signs of stopping; this issue, Jaime looks in on Maggie and Hopey, and concludes their latest adventure (with a flashback to 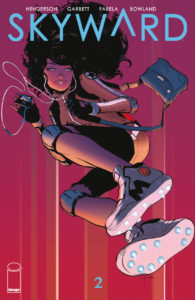 their high-school days), while Beto’s installment focuses on Fritz and her daughters, and throws in one of her B-movie adventures, too: check it out and, if you’re intrigued, you’re in luck — you’ve got 37 years of excellent storytelling to start exploring.  Barrier continues to be a smart sf adventure involving an American ranch woman and a Salvadoran border-crosser who’ve been kidnapped into a huge alien spaceship, and are trying to survive there; part of its cleverness is the way the title noun can refer to physical border barriers, the language one between the two protagonists, or the ones they’re trying to get past in that space vessel. The sideways, widescreen format shows off Marcos Martin’s beautiful, precise art and Muntsa Vicente’s elegant coloring to great effect, and the five-issue format (and quick release schedule) makes for fast-paced, energetic storytelling. Skyward is 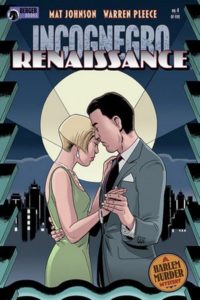 based on a high-concept notion: that the Earth’s gravity suddenly, one day, is reduced nearly to zero, meaning that anyone who’s not nailed down or inside is at risk of floating off into the sky and out of the atmosphere (how the atmosphere itself doesn’t float away hasn’t been covered yet, but we’re only on the second issue…). The story takes place twenty years after that event; older people are terrified of even going outside, while kids who’ve grown up in it flit around the city skyscrapers and handle the near-zero-g environment effortlessly. Writer Joe Henderson (the showrunner of TV’s Lucifer) works out the implications of the change well (it’s the tops of the skyscrapers where the poor people live now — because it’s so much more dangerous there — while the rich live on the ground, in secured roofed building, and never go outside without their high-tech magnetic 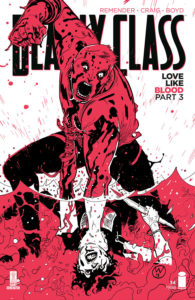 boots) and Lee Garbett draws the heroine and her anti-grav acrobatics with an easy, supple grace. Incognegro reaches its penultimate issue in its arc about a black reporter (who’s light-skinned enough to pass as white; hence the title) who’s investigating a murder mystery set during the Harlem Renaissance; it’s a well-researched and character-rich hard-boiled detective tale. Deadly Class, Rick Remender’s long-running (hey, 34 issues in today’s market counts…) comic about a boarding school for assassins, has been getting a lot of attention recently, because it’s been picked up as a series by the Syfy network. Its characters and world are well worth experiencing, so if you’re really interested in it, start at the beginning with the trades — but this issue offers a good sampling of its rich relationships 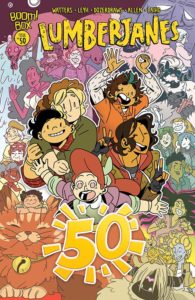 and frequently-murderous, all-out action; try it and see. Speaking of quirky, long-running series, Lumberjanes reaches its 50th issue this week; it might seem amazing that an ultra-cartoony book about a scruffy band of pseudo-Girl Scouts at a summer camp in a magical forest could last that long — until you actually read it; once you get caught up in its characters and their relationships, and watch their teamwork and friendship get them through all their all their adventures, and appreciate how carefully the creators dole out bits and pieces of the forest and the camp and their backstory, then the comic’s making it to a 50th anniversary seems inevitable, and not strange at all.

With 40 years of experience in comic reading, collecting and reviewing, English Professor Phil Mateer has an encyclopedic mind for comics. Feel free to ask Phil about storylines, characters, artists or for that matter, any comic book trivia. He will post your questions and answers on the AABC blog. His knowledge is unparalleled! He is also our warehouse manager, so if you are looking for that hard to find comic book, ask Phil!
View all posts by Phil →
This entry was posted in New Comics, Reviews and tagged Barrier, Black Panther, Darkhawk, Deadly Class, Deadpool, Doctor Strange, Flash, Hulk, Incognegro, Iron Man, Justice League, Love and Rockets, Lumberjanes, Silencer, Skyward, Terrifics. Bookmark the permalink.