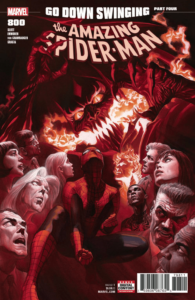 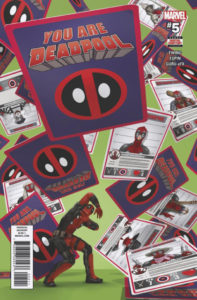 considering it’s a 92-page book with one 80-page story (four times as much as the standard #3.99 Marvel comic), one that concludes a flashy multiple-issue tale that’s the climax to writer Dan Slott’s seven-years-plus tenure, and then throw in the artists: four teams on four different chapters (Nick Bradshaw and Edgar Delgado; Humberto Ramos, Victor Olazaba and Edgar Delgado; Giuseppe Camuncoli, Cam Smith and Java Tartaglia; Stuart Immonen, Wade von Grawbadger and Marte Gracia), plus two codas (Camuncoli, Smith and Tartaglia; Marcos Martin and Muntsa Vicente, who are on another high-profile conclusion this week, in Barrier), and consider all the guest-stars and callbacks and plot twists (including one fairly-easily-reversible death), and it’s 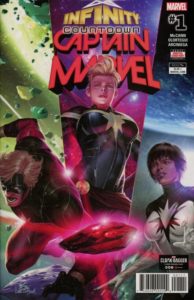 actually a pretty good deal.  You Are Deadpool concludes a five-issue find-your-own-adventure series;  Al Ewing’s clever plotting makes them a great gift for any Wade fans. Just be careful — you need ’em all to play, and you’ll need a six-sided die, too — unless you want to cut out the one provided in-comic.  Infinity Countdown: Captain Marvel is ostensibly about how Carol Danvers has ended up custodian of one of the Infinity Gems (the reality stone, which gives her access to alternate/”What If?” dimensions), but also offers a good recent history of the character, and a glimpse at what makes her tick; Diego Olortegui uses 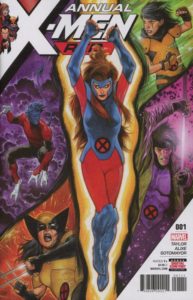 a clear-lined manga-ish style on the conversations and everyday stuff, and gets some pizzazz into the splashes, and this works well as an introduction/primer on the soon-to-be-movie heroine. X-Men Red Annual does something of the same to the recent X-team book featuring Jean Grey: it introduces us to the team members, supporting cast and related heroes (and one big villain) and establishes their relationship to Grey, while letting her show off her now-non-Phoenix-fueled, but still imposing, powers, and articulate her Wonder Woman-like social mission; it does a good job of, when finished, making the reader want to seek out the next issue of the regular comic, to see what happens next. 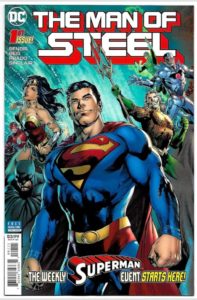 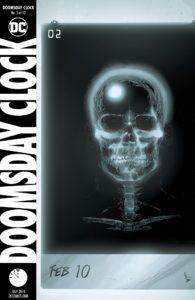 Man of Steel is the first Brian Bendis issue of Superman, using the weekly-issue mini-series format that’s worked well for both Marvel and DC lately. It’s not earth-shattering (in fairness, it’s hard to conceive how any writer could, at this point, give us a Superman we’d never seen or considered before; I think the last person to do that was probably Alan Moore), but it is ultra-competent: it has Big Blue round up a minor criminal, help with a high-rise fire (setting up an ongoing mystery while introducing a new Metropolis official) while demonstrating his powers and character, and work at the Daily Planet (as it indicates that something unexplained has happened to Lois and Jon), while also giving some backstory 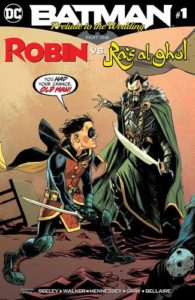 on the big new Kryptonian-eradicating bad guy. Spreading this out over half a year would have been too slow-paced, but bringing it to us over six weeks should work out just fine, and be an effective introduction to Bendis’s style — when the new iterations of both Action and Superman, both scripted by him, start in July, we’ll all know exactly what we’re getting.  Doomsday Clock has been plagued by delays, and if that’s caused readers to drop the title, they’ll miss the best one yet — #5, out this week, does more to move the plot forward, on multiple fronts, than the first four issues altogether: there’s Adrian Veidt and Batman, Saturn Girl meeting Rorschach, Johnny Thunder searching for Alan Scott’s magic lantern, a fake-news scandal (that may or may not have been initiated by Lex 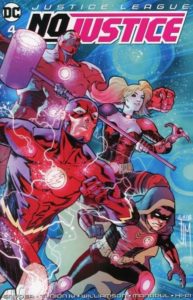 Luthor) threatening the heroes, and the Joker showing up, all the parts beginning to mesh efficiently, and everything beautifully drawn by Gary Frank; while this project has been haunted by production issues (and one or two moral ones), it’s undeniably a great-looking (and reading) comic.  Batman: Prelude to the Wedding: Robin vs. Ra’s Al Ghul has a title almost longer than the actual book, but one that lays out its concept clearly: you know exactly what you’re getting with it.  Seeley gets Damian’s attitude and voice right (it’s a tightrope between brilliant tactician/fighter and annoying little twerp), while Brad Walker uses a Neal Adams/realistic style to make everything, and everyone, look good; come for the father/son fight, but stay for the Selina/Damian interactions, especially at the end.  Meanwhile, No Justice 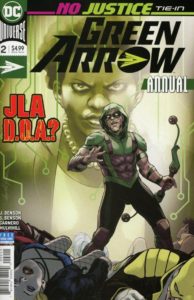 ends its run and sets up the next version of the Justice League (and manages to do it all in this one issue, even given the massive cliffhanger ending of the previous one: not an easy job, that), with Francis Manapul back on board as artist, while the Green Arrow Annual gives us an extended version of Oliver Queen’s place in the plot, and what got him to his Arctic Fortress-of-Solitude confrontation with Amanda Waller in No Justice #3; it also extends past this week’s #4 conclusion, with J’onn J’onzz entrusting him with something that makes him, in a way, the most powerful JL member. That all makes it an important piece of the No Justice puzzle, and a good excuse to buy both books and read them together while waiting for Justice League #1 next week. 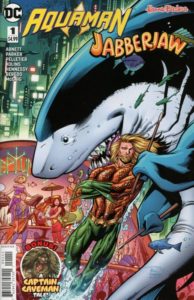 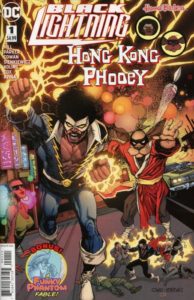 The Hanna-Barbara/DC super-heroes mashups are back this year — with even more obscure characters, since most 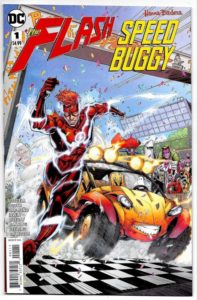 of the better-known ones got used last time; I’m guessing most readers of this will either be buying all of them, or none. They’re all worth a look: Aquaman/Jabberjaws (a logical combo, you have to admit…) uses the old dimensional-portal trick to get its principles together, and adds a “Captain Caveman” backup by Jeff Parker and Scott Kolins; Black Lightning/Hong Kong Phooey just sets its tale in the ’70s (where both properties got their starts) and rolls with it (with some nice Denys Cowan art), while providing a “Funky Phantom” back-up — also by Jeff Parker and Scott 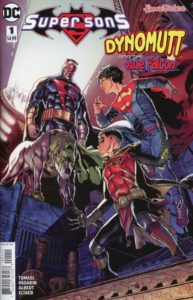 Kolins — that isn’t going to make opponents of gun control at all happy (if the alt-right media ever gets ahold of it, make some popcorn and sit back to enjoy the show…). Flash/Speed Buggy hooks the titular auto up to the Speed Force, and uses the Wally West Flash, setting everybody in the regular DC universe, while Super Sons/Dynomutt (and the Blue Falcon) does the same — and reads quite a bit like a regular issue of the kids’ own title; considering Peter Tomasi has been their writer since its launch, that’s not really a surprise, and fans of the super-kids should definitely pick this up while they’re waiting for the Super Sons relaunch later this summer. 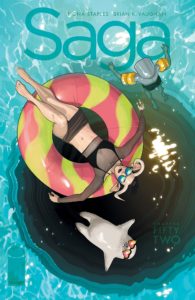 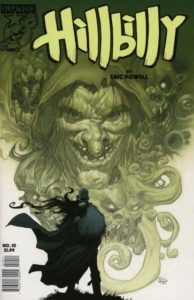 Two indy books written by Brian K. Vaughan: Barrier ends its five-issue run in fine form, thanks to the remarkable Marcos Martin/Muntsa Vicente art, and a script that takes its alien-abduction plot in some unexpected directions, with an open-ended conclusion that emphasizes both the number, and the pettiness, of both international and emotional barriers.  Saga ramps up the tension and seems to be reaching a climax in its sprawling space-opera tale, with many of the principle characters all on the same 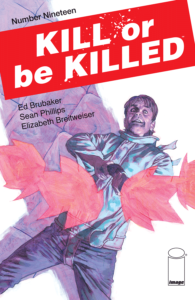 planet for once — which doesn’t bode well for most of them.  Hillbilly is all Eric Powell, and this issue sets up its own climactic battle, between the title character and his allies and a couple of thousand witches, goblins, trolls and other backwoods horrors; his EC-inspired art is perfect for stuff like this, and if you’re looking for a new comic in a relatively-light week, this is worth checking out. Kill or Be Killed offers its penultimate issue, and sends readers into the finale with pretty much an ultimate cliffhanger for its vigilante narrator on its last 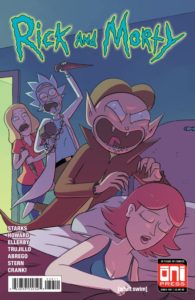 page; don’t use this issue as a sampler, unless you’re the kind of person who reads the last page of a murder mystery first — go get the previous 18 installments, either in comic or trade form, and then appreciate what’s here in this one. Rick and Morty doesn’t often go in for continued stories, but this is the second of a two-parter involving Morty being turned into a vampire; watching Rick, his daughter and his grand-daughter’s various methods of dealing with a throng of undead bloodsuckers (not to mention Jerry’s useless-as-always attempts) is just as much dark-edged, violent fun as you’d expect; its lightning-quick action and humor make it a great chaser after reading all the other books on this list.

With 40 years of experience in comic reading, collecting and reviewing, English Professor Phil Mateer has an encyclopedic mind for comics. Feel free to ask Phil about storylines, characters, artists or for that matter, any comic book trivia. He will post your questions and answers on the AABC blog. His knowledge is unparalleled! He is also our warehouse manager, so if you are looking for that hard to find comic book, ask Phil!
View all posts by Phil →
This entry was posted in New Comics, Reviews and tagged Aquaman, Barrier, Batman, Black Lightning, Captain Marvel, Deadpool, Doomsday Clock, Flash, Green Arrow, Hillbilly, Justice League, Kill opr Be Killed, Man of Steel, Rick and Morty, Saga, Spider-man, Super Sons, X-men. Bookmark the permalink.