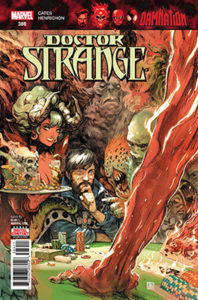 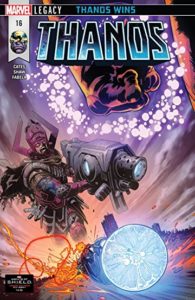 These comics symbolize a changing of the guard at Marvel: less than two years ago, Donny Cates had written a couple of obscure Dark Horse series (The Paybacks, about repo 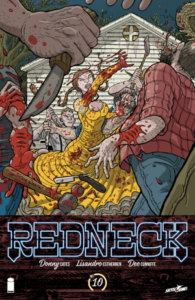 men for superheroes behind on their payments for all their super-crap, stood out), but then he went to Image and published God’s Country, about an aging Texas patriarch vanishing into Alzheimer’s who finds a magic alien Excalibur-type sword, and it was surprisingly good, and then his also-Texas-set vampire series Redneck was even better, and all of a sudden he was signing an exclusive contract with Marvel and writing Doctor Strange and Thanos. Doctor Strange started with Loki as sorceror supreme and then backtracked to explain why, and it was 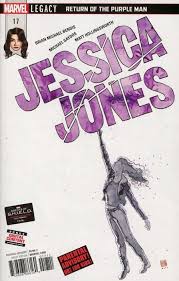 clever, and respected the complicated, grittier Strange of Jason Aaron’s long run before it, and a lot of fun. Thanos immediately teamed up the Titan with a far-future version of himself whose sidekick, an ancient, cosmic Ghost Rider, caused enough buzz to turn its first few issues into Hot Comics. So, three of those Cates comics are out this week: Doctor Strange, Thanos and Rednecks.  All are worth your

time.  The other writer with multiple books out this week is Brian Michael Bendis, who’s wrapping up his many Marvel series after his decades-long run there. Jessica Jones resolves its Purple Man arc and leaves room for a series finale next month, while Iron Man still has a few chapters to build to its 600th-issue conclusion, and does it with brisk, obvious affection for its many characters and their stories — with the Bendis/Alex Maleev Doctor-Doom-as-Iron-Man sections the best. These are worth your time, too — the end of one storyteller’s tenure, as a new one begins. 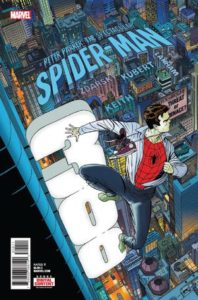 Spectacular Spider-Man hits a giant-size anniversary with the climax of a story about old Spider-villain the Tinkerer; Chip Zdarsky, an artist turned writer, knows how to give his art team visually-cool layouts, and here they feature cleverly-plotted action and multiple guest stars, good guys and bad guys both. There’s also one of those all-300-covers galleries, and a six-page Black Cat/Spider-Man story with Goran Parlov art that riffs on the Batman/Catwoman romance over at DC (Zdarsky being clever again) and is just beautiful, except for a big “Chip Zdarsky/Goran Parlov” signature box on three of the six 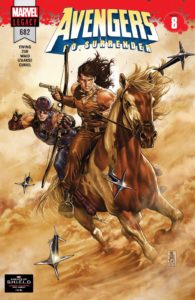 pages that serves no purpose except to pull the reader out of the already-thin story. Gwenpool ends its run after a remarkable year in which it reinvented its heroine, focused its tone and achieved deserved cult status; I suspect that when these get published as trade collections they’ll keep the character alive, and eventually bring her back (but, please, only by this creative team: Hastings and Gurihiru are as essential to this book’s success as Gerber and Colan were to Howard the Duck). Meanwhile, Avengers continues its big regular-issue weekly epic by bringing in Hawkeye and Red Wolf from Occupy Avengers to help save the day (at least temporarily), and, at the end, 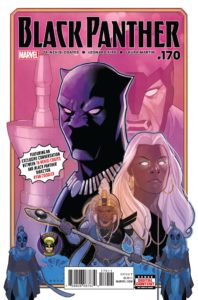 reintroducing a certain green-skinned Avengers OG; it’s been smart marketing to cancel all the hanger-on Avengers titles, and merge everyone into the better-selling flagship title during its three-month-long story — it’s less confusing for readers to follow, and clears the decks for whatever relaunches spring out of the conclusion.  Black Panther is in the middle of a big story, too, with guest stars and fights and interdimensional entities and the return of a familiar face or two; it’s good, and there’s the bonus of a two-page transcript of a meeting between Panther writer Ta-Nehisi Coates and BP movie directer Ryan Coogler; that’s a mutual admiration society, for sure, and an entertaining one to listen in on. 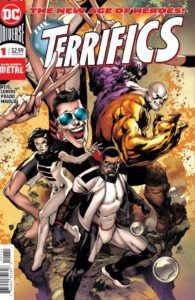 DC’s “New Age of Heroes” launches continue to roll out; they’ve been hit and miss so far, but The Terrifics comes with a good pedigree — Jeff Lemire might be genetically incapable of writing a bad comic, and Ivan Reis is a solid superhero artist, in a ’90s-Image, Tony Daniel/Todd McFarlane style. What we’ve got is basically Batman and the Outsiders, except that instead of Batman the leader’s Mr. Terrific, with a cast that begins with both Metamorpho and Plastic Man, two of the most versatile, and powerful, characters in the DC universe. By the end of the first issue, they’ve encountered Phantom Girl, of the Legion of Super-

Heroes (not a spoiler, since there she is on the cover), and another, particularly startling last-page character reveal (although not quite as much if you’ve been following Justice League of America, and noted its use of Alan Moore’s ABC/Wildstorm character Promethea there); it looks like a fun team, with intriguing possibilities, and while the debut offers a lot of premise-building, it does its job of making me want to read the next installment.  The Silencer has a derivative hook (female assassin has retired and now’s a mom, but gets pulled back into the business; that’s the same set-up as Gilbert Hernandez’s Assassinistas, and of course both owe a debt to Kill Bill), but Dan Abnett is a skillful plotter (he’s made Aquaman readable again for the first time since Geoff Johns), and as long as John Romita Jr. is drawing it I’m in; his attractive character designs and butter-smooth action 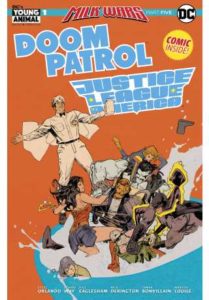 style are hard to resist.  Abnett’s also the writer on the new Mera, Queen of Atlantis mini-series, following Aquaman’s partner as, after revolutions and takeovers and revolts, she’s now (1) the queen, but in exile, and (2) confined to the surface world, because until she heals from injuries suffered in Aquaman’s own series, she can’t breathe under water. It looks like this will be running in tandem with that title, too, and it includes the return of a prominent old adversary, so aqua-fans won’t want to miss it.  Doom Patrol/JLA Special is the conclusion of “Milk Wars,” the Young Animals/Justice League/JLA crossover, with a victory (mostly), the return of an original DP member, the altering of another, and a foundation built to launch the new seasons of Shade, Cave 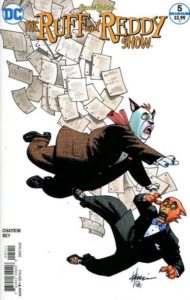 Carson, Mother Panic, and (eventually, if it ever gets back on schedule) Doom Patrol itself; if it’s made regular superhero readers curious about the weird, offbeat corner of the DC universe that’s the Young Animal imprint, then good for it. Finally, The Ruff and Reddy Show continues its satirical look at a Hollywood with both human and animated (or “celimate”) characters coexisting; the series of one-page pilot-episode scenes that the two title characters keep appearing in here are just as cynical, funny and insider-knowledge true as you’d expect from writer Howard Chaykin, who’s been both a student and a part of that world for a long time, and knows just how to tweak it for maximum effect. 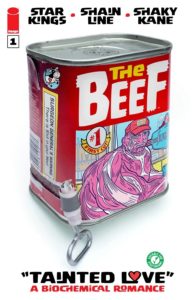 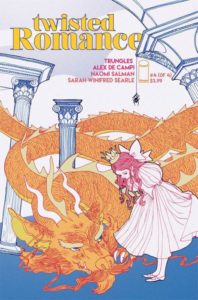 The Beef is about a guy who works at a slaughterhouse, eats a lot of meat, gets picked on by bullies, and then Hulks out. First issue’s all preamble (the last page is the Hulk-out one), but the Shaky Kane art makes it worthwhile; he’s an 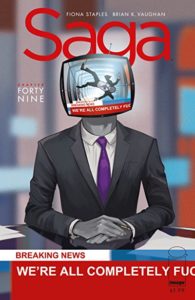 English guy, but his art has some of the primitive basic tough-guy New York City energy of a Jack Kirby, or Dean Haspiel, and it’s perfect for the kind of Trumpian lower-class diner-bro culture on display here.  Twisted Romance is exactly the opposite: in the last of its four issues, Alex de Campi spins a feminist fairy tale designed to teach girls not to put up with abuse from guys like the Beef bros.  It’s got Art Deco and manga influences that make it look like a really well-designed coloring book, with a couple of beautiful splash

pages: not a surprise, since all four issues of this mini-series have showcased great artists who, since they don’t draw superhero books, aren’t very well known, and should be. Meanwhile, Saga begins a new arc: eight trades in print now, each collecting six issues of the comic, and selling better than any other graphic novel series without the words “walking” and “dead” in its title;  great, beautifully-drawn space fantasy will do that. Lumberjanes is great fantasy, too, and has published almost as many issues as Saga, and while its setting seems to be much smaller, an enchanted forest, it’s starting to have as 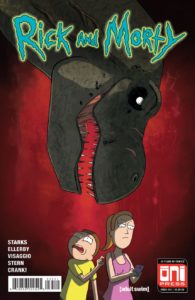 elaborate a map as Oz: we’ve found out in this story that one part opens up into a timeless prairie, with as varied a mythological menagerie as the rest. Rick and Morty has an even vaster setting than Saga: the multiverse, which allows for variations like the Jurassic Park riff here, with its stark ending for the kids,  or the backup story, which takes advantage of the fact that, with so many multidimensional versions of the main characters available, you can do horrible things to some of them, and still have plenty left over (I really like this book, but… you know those comics that make you feel happy, and optimistic about the future? This isn’t one of those…).

With 40 years of experience in comic reading, collecting and reviewing, English Professor Phil Mateer has an encyclopedic mind for comics. Feel free to ask Phil about storylines, characters, artists or for that matter, any comic book trivia. He will post your questions and answers on the AABC blog. His knowledge is unparalleled! He is also our warehouse manager, so if you are looking for that hard to find comic book, ask Phil!
View all posts by Phil →
This entry was posted in New Comics, Reviews and tagged Avengers, Black Panther, Doctor Strange, Gwenpool, Iron Man, Jessica Jones, Lumberjanes, Mera, Milk Wars, Redneck, Rick and Morty, Ruff and Reddy, Saga, Silencer, Spider-man, Terrifics, Thanos, The Beef, Twisted Romance. Bookmark the permalink.