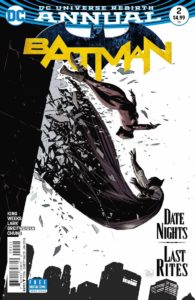 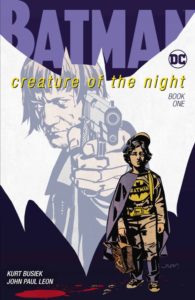 DC books get first position this week, largely on the strength of their Bat-offerings. Batman Annual is a stand-alone tale, but ties into the Batman/Catwoman romance that’s been brewing in the regular book for a while: it traces their relationship from the past into the relatively-distant future, all the way to its inevitable end. The future part makes it more of an Elseworlds story, but King, who caused such a splash with his Vision and Omega Men series last year, earns his growing reputation as an effective writer by  pushing the readers’ emotional buttons with subtlety and skill. This is exactly what an annual should be — it takes advantage of the greater page

count to offer a powerful, self-contained story that readers will remember. Batman: Creature of the Night is by another skillful writer, Kurt Busiek, who’s different from King largely in that he’s been doing his job well for decades. It’s a lot like his Superman: Secret Identity series, which was about a kid named Clark Kent in a real-world setting like ours where Superman is only in the comics — except that then, impossibly, he starts to take on the powers of his hero. So too for Batman: CotN, wherein a kid named Bruce Wainwright loves Batman comics, but then is traumatized when his parents are killed by a burglar; soon after, criminals start getting attacked by a mysterious, monstrous night-time creature. It’s not the kid (who is still, after all, just a kid), but the connection gradually becomes plain….  Very well done, as 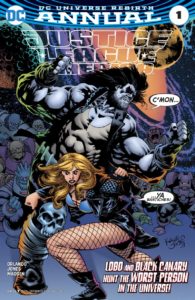 anyone who’s been reading Busiek’s Astro City should know; his knack for adding real-world, human elements to super-hero tropes works to great effect here, too.  Mystik U starts with a near-future DC earth where some Big Bad magical crisis has wiped almost everyone out; Dr. Occult zaps Zatanna back to her past as a teenager in an attempt to change the timeline, and voila: we’ve got Gotham Academy crossed with Harry Potter, as a 16-year-old Zatanna who’s just discovering her powers ends up at a magical boarding school with young versions of Sargon the Sorcerer, the Enchantress, and the son of Felix Faust, among others; bonding, monster battles and magical hi-jinx ensue. As a YA version of these characters, it’s pretty good, and if you were one of the readers who kept Gotham Academy going as long as it did, you should like this too.  Justice League of America Annual is 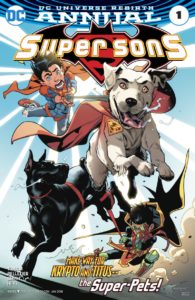 notable for the Kelley Jones art; it’s a buddy-movie story involving Black Canary and Lobo, of all people, in outer space fighting another Czarnian (no, not Emo Lobo…) and learning to grudgingly tolerate one another, and it’s another example of good use of the expanded annual format, this time to tell a long, self-contained story spotlighting just a couple members of the team, with space for some gorgeous, quirky Jones splashes (space dolphins!). So too for Super Sons Annual, which, while it starts out with the kids, quickly evolves into a modern-day Legion of Super-Pets story with Krypto, Titus the Bat-hound, Streaky the super-cat, and a couple of others, including the Bat-Cow and Detective Chimp; clever dialogue from the animals, and it’s enjoyable in direct proportion to your fondness for heroes of the four-legged variety.  New Talent 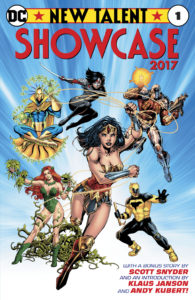 Showcase 2017 comes out of the DC Talent Development Program and its 2016 workshops for aspiring artists and writers; you get seven stories for your $7.99, the best of which are a Poison Ivy Tale by Owl Goingback and Matt Merhoff, a Doctor Fate (the classic one) story written by David Accampo and with cool art by Sam Loth, and the closer, a Scott Snyder-scripted Wonder Woman story with some nice-looking, horror-tinged art by Ibrahim Moustafa. This is worth it to get a glimpse of a bunch of future comics talent (or maybe just to play the odds that at least one of these people will develop into a major creator, and that this book, their first published work, will become a collector’s item…).

Old Man Logan starts a new Legacy arc with its grizzled title character in Tokyo, coming up against a couple of different-hued samurais (the Silver one, and a new Scarlet one), and it’s worthwhile for the fun of watching Mike Deodato’s careful, intricate and violent versions of the teeming city, and the inevitable ninja and yakuza battles.  X-Men Blue starts a new story, too, called “Cross Time Capers”; that’s a tribute to the long arc by that name back in the early Chris Claremont/Alan 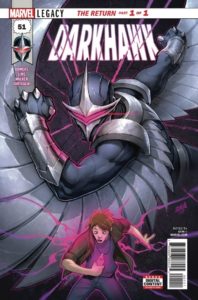 Davis Excalibur series, although in this case it’s Magneto and Hank McCoy fiddling with time machines, trying to send the younger versions of the X-people back to their own era; naturally, things go wrong, and the fun of a tale like this is to see which Marvel future and past timelines they end up ping-ponging around in. Darkhawk #51 is a one-shot involving that ’90s character; it brings us up to date on his exploits (he hasn’t turned into the title hero in quite a while), puts him in conflict with aliens hunting for his transformative amulet, and sets up a possible sequel; the art’s 25-year-old Image-influenced style should give readers of a certain age a bittersweet pang of nostalgia.

Sword of Ages is both written and drawn by Gabriel 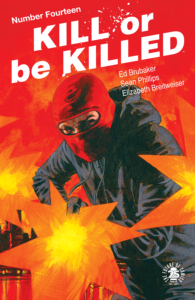 Rodriguez, the artist on the Joe Hill-scripted Locke and Key series from a few years ago; the story, an Authurian/space opera/fantasy mashup, probably has a few too many moving parts (the result of trying to get a lot of world-building into this first issue), but he’s got a smooth-flowing, dramatic style that pays off well, especially in the splash pages; there’s a shot of a space jellyfish near the beginning, and one of a dragon-like lake monster at the end, that are practically worth the price of admission by themselves.  Kill or Be Killed has its vigilante main character battling Russian mobsters and thinking he’s 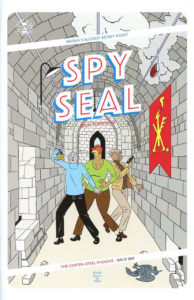 managed to get his life back to normal — except, of course, that in a Brubaker/Phillips crime comic no one gets to walk away unscathed; the ending is one that regular readers probably saw coming, but even so offers a cliffhanger designed to bring everyone back for more next month. Spy Seal concludes its first volume (they even have an ad for the trade collection, due in January, on the last page), and does it in fine form, as its anthropomorphic British Secret Service characters end up battling the bad guys in a Scottish castle, all the better to showcase Tomasso’s heavily Hergé/European influences (his impression of the ligné claire style is spot-on (click on the cover, up to the right there), with even the endpages looking like 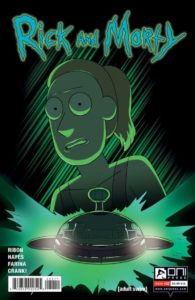 something you’d find in a graphic novel in some obscure, cool-looking Belgian bookstore). Rick and Morty has been spotlighting various non-title characters, with a surprisingly-heart-tugging look at Beth, the mother, a few issues ago; here, we get a story about sister Summer, and the all-female creative team emphasizes her teenage-girl contradictions — sometimes emotionally needy and confused, but smart, tough-minded, ultra-competent and kick-ass when she has to be — as only fellow members of that particular tribe could (she’s made to seem a much more logical partner for Rick, albeit without the general put-upon-ness that makes Morty such an effective foil for him…).

With 40 years of experience in comic reading, collecting and reviewing, English Professor Phil Mateer has an encyclopedic mind for comics. Feel free to ask Phil about storylines, characters, artists or for that matter, any comic book trivia. He will post your questions and answers on the AABC blog. His knowledge is unparalleled! He is also our warehouse manager, so if you are looking for that hard to find comic book, ask Phil!
View all posts by Phil →
This entry was posted in New Comics, Reviews and tagged Batman, Darkhawk, Kill or be Killed, Mystic U, New Talent Showcase, Old Man Logan, Rick and Morty, Spy Seal, Super Sons, Sword of Ages, X-men. Bookmark the permalink.