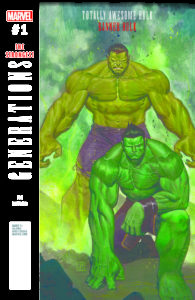 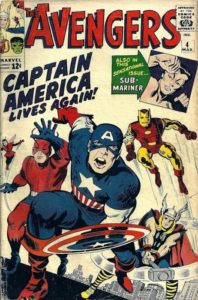 Of the traditional-superhero Marvel titles this week, the most-anticipated is Generations, the first of a series of one-shots pairing the classic and newer versions of various characters like the Hulk, Iron Man, Spider-Man, etc.  They don’t waste any time explaining it: on page one, the Amadeus Cho Hulk is suddenly blipped to the desert Southwest a couple of years in his past, and there encounters the Bruce Banner Hulk. Writer Pak has been chronicling both characters’ exploits for a long time (his Planet Hulk story began in 1999, eighteen years ago), and knows the right emotional beats as Banner gives Cho some insight on their shared curse, while the thirty-page story gives Buffagni plenty of Hulk vs. Hulk vs. army vs. giant monster action to draw, including a couple of suitably-dramatic splash pages. Whether this will eventually hook into something larger is anybody’s guess, 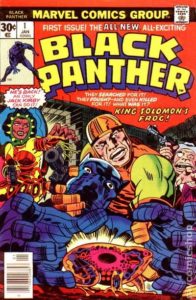 but if you’re a fan of either, or both, Hulks, you’ll probably find this worth your time. The True Believers $1-reprint series is spending August focusing on Jack Kirby (who would have been 100 this year, and is the subject of similar tributes over at DC, including this week’s New Gods Special), and this week brings the 1963 Kirby/Stan Lee rebirth of Captain America, from Avengers #4.  It’s quintessential early Silver Age Marvel, jam-packed with action and characters  who crackle with energy and threaten to leap out of the page at the reader, and if you don’t have it for God’s sake spend the dollar and get it. That energy’s also present in Black Panther #1, from 1977, solo Kirby fourteen years later, and, without Lee to temper it, erupts into dimension-spanning brass frogs, pint-sized n’er-do- 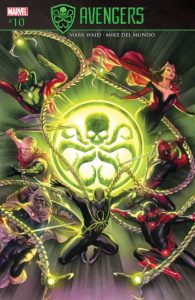 wells, elaborately-costumed criminal-mastermind princesses and big-headed visitors from six million years in the future; it doesn’t make total sense, but it’s worth a buck, too, especially  since it’s also got the eleven-page Lee/Kirby Black Panther/Captain America story from Tales of Suspense #98.  Meanwhile, in the present Marvel universe, in Secret Empire, Cap’s been cosmic-cube-retconned into a Hydra fanatic, and helped that fascist organization take over the U.S.; this week’s Avengers and Champions, both written by Mark Waid, involve their heroes dealing with those events. In Avengers #10, the now government-sanctioned team is a Dark Avengers-ish lineup of a Doctor Octopus Spider-Man, a reprogrammed Vision, a demon-possessed Scarlet Witch, Deadpool, Taskmaster, and a reluctant Thor/Odinson, and 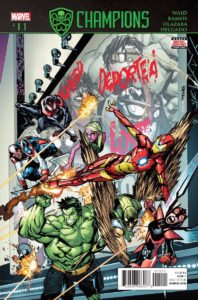 they bicker and do horrible things to a couple of trapped aliens; between the Alex Ross cover and Mike del Mundo’s colorful, dreamlike art, the visuals carry the story well. Champions has Humberto Ramos’s more solid, cartoonier panels, as its much-younger crew (the Vision’s daughter, plus the legacy versions of Hulk, Iron Man, Wasp, Spider-Man and the Falcon) look for survivors in a Las Vegas destroyed by Hydra forces trying to wipe out a resistance base; Waid’s idealistic-youth-vs.-harsh-reality theme, emphasized since the first issue, gets another workout here, and as always he’s good at using it to illuminate character, and at giving his heroes hope along with the hard knocks. 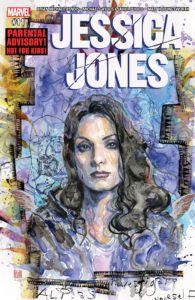 Kelly Thompson proved she was a good writer when she actually made readers care about Jem and the Holograms, and she and Leonardo Romero are making this Kate Hudson LA-private-eye version of Hawkeye just about as good as the Matt Fraction/David Aja Clint/Kate one; this conclusion to the current arc offers a great sampler for 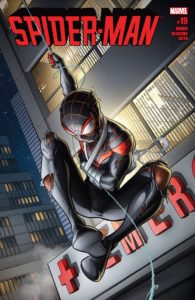 new readers.  The art’s attractive and clear, while the story has the title character involved in an underground fight club and demonstrating just how tough she can be, with the supporting cast getting a lot of attention too: this is a really good, under-appreciated comic, and you should try it.  It wouldn’t be a normal Marvel week without a couple of books from Brian Michael Bendis; Jessica Jones has the usual street-level New York City cops-and-superheroes energy; in addition to the regular Gaydos art, equal parts gritty and pretty, there’s a nine-page Maria Hill flashback sequence drawn by the 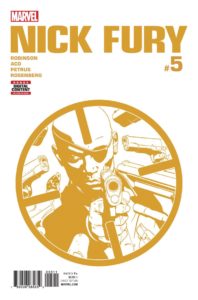 great Javier Pulido to resemble one of those Silver Age “Agent of S.H.I.E.L.D.” Strange Tales episodes. Spider-Man, one of the better ongoing superhero titles, is a breather issue, with a bunch of screen time for various characters and subplots helping to set up a big fight next issue with a leveled-up Hammerhead (Bendis’s love for writing goombah mobsters comes through clearly in his scenes), and some debate about whether Miles shouldn’t, maybe, call himself something other than “Spider-Man,” since that title’s already taken. Nick Fury offers another stand-alone spy caper, with the son of the original Fury passing through a small town

that, inevitably, is hiding something much more sinister; it has the usual stylish art, with ACO acing two double-page spreads that cover more action than most entire comics. Black Bolt, meanwhile, sees that Inhuman and the Absorbing Man trapped in a space prison and facing death, leading to some humanizing origin stuff about the former Crusher Creel before a canis ex machina conclusion; this continues to be an unexpected pleasure in both art and story, a cult hit by lesser-known creators much like last year’s The Vision: get all four issues while they’re still on the stands, before everyone else figures out that it’s good and they all get expensive. 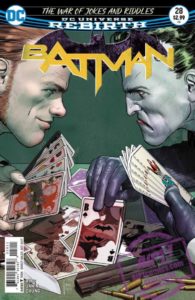 Batman continues the Joker/Riddler war, behind a striking, lushly detailed cover by interior artist Janin (click on the image over to the left there and look at the faces on all those cards…). King plays around with the timeframe, with Batman narrating the years-ago events to Catwoman   — to whom, in the present, he’s just proposed; that lets him 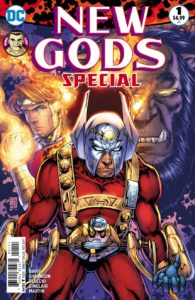 condense an almost-week-long Deadshot/Deathstroke battle into eight pages (including two double-page splashes), while highlighting his guilt at not being able to prevent all the civilian deaths they caused: an efficient, effective mix of character and action that’s typical of his tenure.  New Gods Special is the DC Jack Kirby tribute mentioned earlier; for $4.99, you get the 23-page main story, an Orion/Lightray/Bug vs. Kalibak battle that’s OK, but there’s also a new six-page Walt Simonson “Young Orion”  tale,  plus eight pages of  Kirby pinups and “Lonar of New Genesis” reprints, that sweeten the pot considerably. 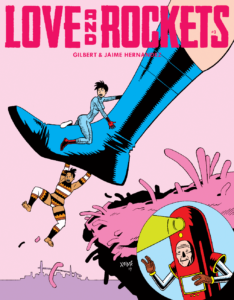 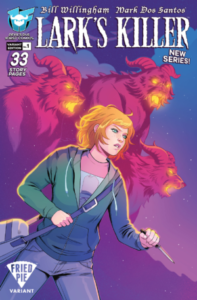 Love and Rockets isn’t a #1 issue, but it automatically goes to the top of the indy “buy” list because the Hernandez brothers have been so good for so long. This issue sees Maggie and Hopey at a Hoppers/punk rock reunion, the occasion for a lot of reminiscing about times past (thirty years can change a lot of things… but not all of them); Gilbert’s half involves Luba’s by-now-very-extended family, 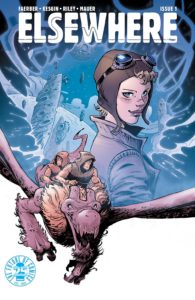 focusing mostly on her grandchildren. Pretty much every comics artist that grew up from the mid-’80s to 2000 cites Los Bros as an influence, and every new issue of Love and Rockets reminds us why that’s true. Lark’s Killer is a new fantasy mini-series from Bill Willingham (Elementals; Fables), a tale about a street kid who stumbles through a portal into a medieval/magical world and has to use all of her urban-coping skills to survive; it’s framed as a series of stories told to a trio of dungeon crawlers by a dragon who may or may not be friendly. It’s as worldly-wise and well-thought-out as all of Willingham’s stuff, and dos Santos’s style, reminiscent of

the old Don Bluth Dragon’s Lair videogame, fits it well.  Elsewhere mines similar ground, with the same sort of fantasy land and a number of humans who stumble into it; the twist is that they’re “disappeared” people like Amelia Earhart, whose arrival is the focus of this first issue. Faerber, who’s been writing comics for quite a while now, knows how to keep things interesting (Earhart’s aviatrix skills let her take to dragon-riding immediately, and there’s a last-page introduction of another “real” vanished personality whose name will go right over the heads of 80% of the readers); Kesgin, a young Turkish artist, is sometimes a little sketchy on the faces, but communicates emotion effectively, and acquits 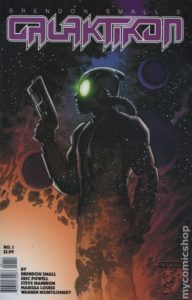 herself well on the book’s one widescreen double-page splash. If you’re a fan of D&D-type fantasy and world-building, both of these books are worth a look.  Grumpy  Cat/Garfield is exactly what you think it is, but elevated by the clever script from Mark Evanier (who’s been directing episodes of the animated Garfield cartoon forever, and knows the lasagna-loving feline as well as anyhone this side of Jim Davis), and the exactly-on-model Uy art. That leaves Galaktikon #1, an sf space satire about a galactic hero going through a messy divorce and borderline alcoholism; it’s co-written by Eric (The Goon) Powell, and has some of his combination of slapstick humor and EC-level violence to recommend it. 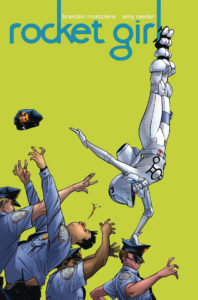 Rocket Girl hasn’t been coming out regularly — it’s produced maybe one issue in the last year — but that’s because Montclare and Reeder have been writing Moon Girl and Devil Dinosaur, and that book, while it might not 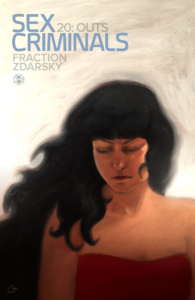 be a best-seller in comics shops, is popular with the scholastic/YA crowd. Rocket Girl, with its jet-propelled police girl from the future, has some of MG/DD‘s diversity, and almost all of its optimism and manic energy; it could have used a recap page so we didn’t have to pull out and reread the last few issues to remember what’s going on, but otherwise it’s nice to have it back.  Matt Fraction showed he was a classicist with ODY-C‘s gender-swapped space take on Homer,  and when he says that Sex Criminals is finishing its second act this week, he means that complications are besetting the heroes: their break-up, most of all. This is not a good jumping-on point (start with the first trade, where from chapter to chapter 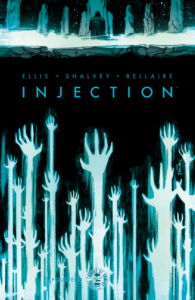 Fraction and Zdarsky’s confidence just explodes, as they realize what they’ve got), but loyal readers will be rewarded; every character gets some screen time, and some drama and/or grace, and we’re left to wonder what’s going to happen next.  Injection is currently about an ancient stone ring on the moors that, when energized, is a gateway to another, more malevolent world; this doesn’t even get into the title sentient A.I. computer program that some of the characters created and which is now out in the world’s machines, feeling its limitations and eying the new dimension hungrily: if that sounds like a typical Warren Ellis comic, here you go; the Declan Shalvey art makes it even better.

With 40 years of experience in comic reading, collecting and reviewing, English Professor Phil Mateer has an encyclopedic mind for comics. Feel free to ask Phil about storylines, characters, artists or for that matter, any comic book trivia. He will post your questions and answers on the AABC blog. His knowledge is unparalleled! He is also our warehouse manager, so if you are looking for that hard to find comic book, ask Phil!
View all posts by Phil →
This entry was posted in New Comics, Reviews and tagged Avengers, Batman, Black Bolt, Champions, Elsewhere, Garfield, Generations, Grumpy Cat, Hawkeye, Hulk, Injection, Jack Kirby, Jessica Jones, Lark's Killer, Love and Rockets, Nick Fury, Rocket Girl, Sex Criminals, Spider-man. Bookmark the permalink.