Let’s start with the indy books, since the Stan Sakai-created Teenage Mutant Ninja Turtles/Usagi Yojimbo one-shot is definitely the best book of the week. Sakai’s been chronicling the adventures of his rabbit samurai for over three decades, and crossed him over with the TMNT gang early in their

existence; this time, a Splinter-like sorcerer brings them to feudal Japan for a mission involving Japanese mythology and one of Usagi’s rogue’s gallery.  The book’s $7.99, but double-sized: we get forty pages of very detailed, exquisitely-composed and colored action, including two double-page splashes near the end, and the story’s so fun and well-told that it’s a bargain.  Heavenly Blues is an afterlife/caper story, with Hell looking like the dive-bar section of a run-down city (except with more torture), and an angel appearing to give two of the denizens a way out — if they pull a heist in heaven for him. Kahn’s good at communicating character with just a few lines and actions, and Hidalgo’s got an edgy, modern-minimalist style that 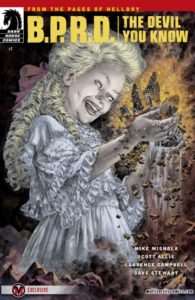 reminds me a little of Dean Ormston (Black Hammer), so this first issue is worth a look. The other debut is a new Mignolaverse title, B.P.R.D.: The Devil You Know, about the aftermath of the almost-apocalypse that’s taken up most of the last decade on that version of Earth.  It involves the surviving Bureau members mopping up, and the little Russian girl (who’s actually a demon) who was freed at the end of the previous volume gathering followers for her shadowy, world-dominating agenda; if you’ve been reading the B.P.R.D. books all along, you’ll want this, and if not this start of a brand-new arc offers a good jump-on opportunity: look at that pretty cover over to the left there…. 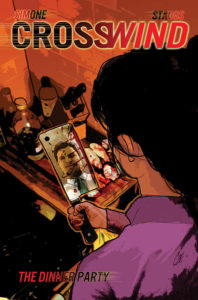 Crosswinds #1 set up its premise: a contract killer and a beleaguered suburban housewife switch minds unexpectedly, and each has to deal with the others’ problems. This second issue focuses more on the hard-assed mob guy in the housewife’s body, and his brisk problem-solving of her domestic crises is bawdy, potentially-bloody fun; if you liked Garth Ennis’s Jennifer Blood, you should get this

book.  Redneck is Donny Cates’s vampire/modern Western mashup; this fourth issue is mostly backstory/origin, as the girl-child psychic vampire Perry probes her Uncle Bartlett’s memories and paves the way for a big fight… next issue. Cates just signed an exclusive contract with Marvel, and will be writing their next volumes of both Doctor Strange and Thanos; he’s got a pulpy emotional heft to his writing, like Tom King or Jason Aaron, and Redneck is a good place to check out his style.  Rick and Morty sees the title characters hiding out in an alien hotel room and

watching interdimensional cable, an opportunity for a rapid-fire channel-surfing smorgasboard of satire on ads and sitcoms and other TV detritus; there’s a clever solution to the alien manhunt thing too.  Saga, in the middle of its current volume, devotes a lot of panel time to establishing Petrichor’s bad-assery through an encounter with some unfriendly locals, while Alana taps into a bittersweet might-have-been future, Hazel does magic, and Vaughan and Staple, who typically include at least one or two WTF? pages in each installment, save a particularly 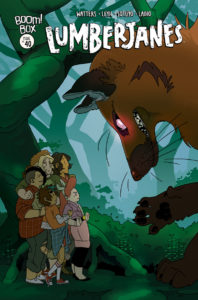 disturbing one for the final-page cliffhanger splash.  Lumberjanes wraps up its current story, involving Parents’ Day and a giant glowing-eyed trickster fox, with the usual sharp characterization (Molly’s relationship with her parents, especially her mother, gets a graphic novel’s worth of information across in just two pages), clever plotting and we’re-all-in-this-together themes. Both Lumberjanes and Saga should reach their fiftieth issues next year: a hopeful sign of longevity in a market sometimes saturated with superhero comics. 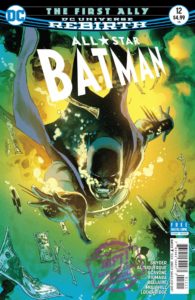 All-Star Batman has been Scott Snyder’s chance to do bat-stories with a series of hand-picked collaborators; here, he’s with Rafael Albuquerque (who’s using a darker, more 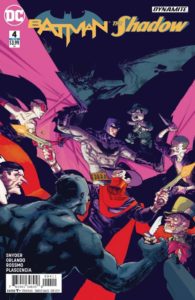 painterly style than his usual) to look at the Alfred/Batman relationship (Alfred, in a kind of Kingsman thread, was recruited as a young soldier by an ancient British program as an “errant knight” to help protect the kingdom, and now Batman is up against that same program). There’s probably more continuity implanting here than is healthy, but those two characters’ father/son employee/employer relationship has always been fascinating, and fertile ground for a story like this. Batman/Shadow sees a big fight between the two title heroes and a chunk of Batman’s rogues gallery.  Rossmo, whose style tends toward the shadowy and the occult anyway, was a good choice for this series: he does a cool Joker, and acquits himself well on a big double-page battle splash, too; the story, now that it’s past the main characters’ adversarial

stage and fully into the team-up, has more than enough action to keep things moving briskly and entertainingly. Doom Patrol, having set up the new/old team in its first arc, begins the second by reintroducing Niles Caulder, the original group’s Chief, with a very Grant Morrison-y plot about invisible aliens that implant bad ideas in your head. It’s a self-contained tale, a good sampler of this book’s many charms, and the best part is the guest artist: Michael Allred, who can handle developments like gravity pirates and team members who evolve into psychic werewolves with ease, and make it all both believable and very good-looking. 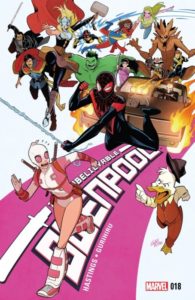 Of the non-Secret Empire Marvels this week, Gwenpool is the most interesting (yes, I’m surprised at that, too…).  The character’s shtick is that she’s from the “real” world, but living in the Marvel universe, and knows that it’s a comic book; up to now, that’s mostly been an occasion for her to, say, know everyone’s secret identities, or be able to anticipate events because she knows how comic-book plots work. Now, though, she’s figured out that she can get “outside” the pages, meaning she can see everything at once, jump around in time and space, and pretty much act like God. This is an unexpectedly-cool idea for a book that, after a fast start, was just kind of trailing along, so it’s worth it to pick up last month’s issue, and

this one, and see where they go with it. Black Panther‘s second long story continues to be faster-paced and more mainstream-Marvel than the first, with Storm back as T’Challa’s partner, and Fenris and the Wrecking Crew as the bad guys.  There’s a mystery about the Wakandan gods to drive the plot, and a couple of good Ororo/Panther and Panther/Thunderball scenes; mix in the Chris Sprouse art, and tit’s worth reading.  Moon Girl and Devil Dinosaur has been using even more fantasy-oriented plots than usual lately — an understandable move, considering its mostly-YA audience.  There was the bit with Illa the Girl-Moon (daughter of Ego, the Living Planet, naturally), and now this issue involves Lunella and DD in an alternate dimension, where their dopplegangers are “Devil Girl and Moon Dinosaur”;

there’s the usual bright, sturdy art from Natacha Bustos, and clever scripting from Brandon Montclare. Punisher continues to benefit from Becky Cloonan’s tough-minded scripting; she gets Frank’s relentless, no-nonsense, Spectre-like approach to bad guys, and knows just how to give him entertaining, often-hapless adversaries on which to unleash it.  Matt Horak gets points for not trying to draw like the late Steve Dillon (who was such a perfect artist for this book for such a long time); part of the plot involves a New York City blackout, and the scenes in the darkness look almost like woodcuts, stark and clear. This issue’s a stand-along story, too, yet another good sampler issue for the week. Each issue of Edge of Venomverse has also been a stand-alone 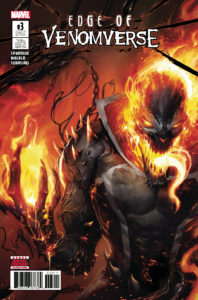 story, looking at alternate-universe versions of the symbiote; here, he’s combined with the Robbie Reyes Ghost Rider, to spooky effect, especially with Tigh Walker’s edgy, Kevin O’Neill-ish art. This character will presumably team up with the X-23 and Gwenpool Venom-hosts from previous issues, plus a few new ones, in September’s weekly Venomverse saga: if you’re a fan of the character you’ll want these funhouse-mirror version origins, too.  Maybe one will break out from the pack the way Spider-Gwen did in the Spider-Verse series that this is so closely modeled after….

Secret Empire #7 gets us to that U.S. Capitol Captain America/Miles Morales Spider-Man death scene from back in Civil War II, and involves the death of a reasonably major character and big scenes for both Steve Rogers and Sam Wilson; the actual two Captain America books with those characters, also written by Secret Empire‘s Nick Spencer, should be read after it. They all tie together neatly, too: not at, say, Jonathan

Hickman levels, but it’s probably no accident that, say,  Sam gets to be inspirational in our own Painted Desert this week, when his first arc as Captain America was also set in the American Southwest. Captain Marvel dovetails into the main story, too, with a lot of sciencing figuring out how to get through the planetary force shield, in between blasting of alien invaders.  If nothing else, this has been a well-run event so far, with a clear plan for each tie-in, few delays (all but the last three issues out before August), and a slow build to September’s Legacy launches. So far….

With 40 years of experience in comic reading, collecting and reviewing, English Professor Phil Mateer has an encyclopedic mind for comics. Feel free to ask Phil about storylines, characters, artists or for that matter, any comic book trivia. He will post your questions and answers on the AABC blog. His knowledge is unparalleled! He is also our warehouse manager, so if you are looking for that hard to find comic book, ask Phil!
View all posts by Phil →
This entry was posted in New Comics, Reviews and tagged B.P.R.D., Batman, Black Panther, Captain America, Captain Marvel, Crosswind, Doom Patrol, Gwenpool, Heavenly Blues, Lumberjanes, Moon Girl, Punisher, Redneck, Rick and Morty, Saga, Secret Empre, Teenage Mutant Ninja Turtles, Usagi Yojimbo, Venom. Bookmark the permalink.