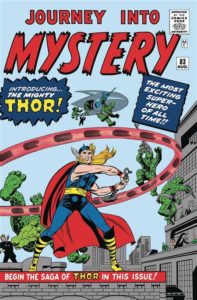 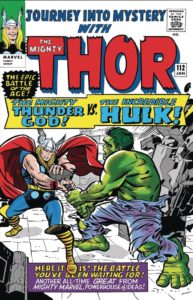 As with every week this month, Marvel’s got a couple of one-dollar Jack Kirby reprints that are worth your time.  The Mighty Thor #1 reprints the Thunder God’s first appearance, from Journey Into Mystery #83, along with the introduction of Loki from #85; Stan Lee wrote the former, while his brother Larry scripted the latter. Both show some early missteps in working out the character (like the famous misspelling of the Odinson’s name in the last panel of the first story) but both also, of course, have that cool Kirby early-Silver-Age art. Thor

vs. Hulk shows how far both Kirby’s and Lee’s confidence with the characters had come in just over two and a half years, as it reprints Journey Into Mystery #112, with its Thor/Hulk battle so energetic that it leaps off the pages and directly at the reader; there’s also a partial reprint of Avengers #3, showing that slightly-earlier, condensed version of the fight from the same team. Groot #1 ditches the superheroes and looks at a couple of the even-earlier Kirby/Lee  giant-monster stories: Groot, of course, because GOTG, although he’s barely recognizable here, and then there’s also the Journey Into Mystery #62 appearance of a giant space alien 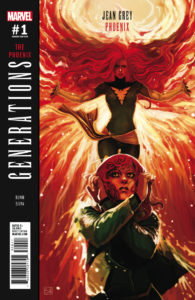 with hypnotic powers called “The Hulk” (he’s been called “Xemnu the Titan” in subsequent appearances, for obvious reasons); together, they’re a good taste of Kirby’s style just a year or two before the 1961 debut of Fantastic Four. Generations: Phoenix and Jean Grey,  as with last week’s Generations: Hulk, sends the current younger version of the character to the past, to meet with the Chris Claremont/John Byrne version after she’s absorbed the Phoenix Force, but before she’s corrupted by the Hellfire Club. Like the Hulk version, it’s pretty much exactly what you’d expect from a conversation

between the two, right down to the current/younger Jean trying to parse the timeline consequences of warning her sort-of-past self what’s coming. Much better, and unexpectedly so, is Inhumans: Once and Future Kings #1, mostly because the writer, Christopher Priest, is very good at making all the court-intrigue stuff smart and thought-provoking, and because the teen versions of Black Bolt, Medusa and Maximus are more fluid and interesting than their grown-up, cliched ones; adding Phil Noto’s dreamlike art and coloring makes this one of the very few Inhumans comics that interest me. 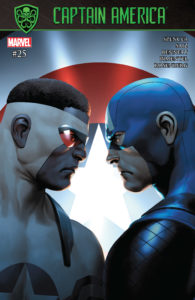 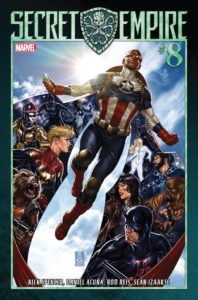 Speaking of unexpected developments, Secret Empire is, finally, actually getting good. The two Captain America books merge into one this week, with thirty 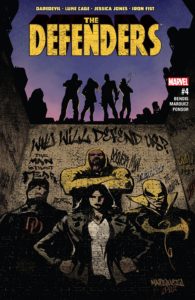 pages of story, and the events there lead directly into Secret Empire #8; since both are written by Nick Spencer, they read like one big 65-page installment, and that gives lots of room for dramatic reversals and counter-refersals, returns of key players thought dead, inspiring speeches, heroic recommitments, and, thanks to a new Inhuman’s barfus ex machina powers, some much-needed victories for the good guys as the endgame begins in earnest; it’s fast-paced and, after all the previous angst, satisfying. Defenders, with the Netflix series due in just a week or two, continues its first arc 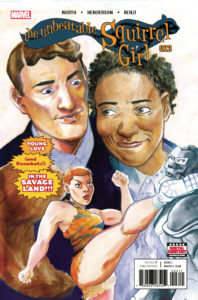 with hopped-up gangster Diamondback, pushing a deadly new street drug, as the antagonist; we also get Hammerhead and the Black Cat over from Bendis’s current Spider-Man continuity, covering some of that book’s same Miles/Hammerhead confrontation, but from a different perspective: plenty of continuity for longtime fans, but clear enough for the TV crowd, too, and with Jessica and, especially, Danny getting to show their street-fighter stuff.  Squirrel Girl is the usual North/Henderson fun, with Doreen and Nancy in a Savage Land whose ancient alien maintenance programs are starting to fail, working with a team of international programmers to try and science it back to life; the

culture clash/tentative courtship between Nancy and a Latverian programmer is worth the price by itself. Amazing Spider-Man — who, according to the Arizona Republic, celebrated the 55th anniversary of his first appearance on Thursday this week (they were talking about Amazing Fantasy #15 in 1962, but I have no idea how they decided its first on-sale date was August 10) — wraps up a big Doc Ock/fall of Parker Industries battle as dependably-entertainingly as always, from the Alex Ross cover to the Stuart Immonen art to the way it hits the usual themes of responsibility and sacrifice without sparing any of the wisecracks, too, and makes it all look easy.

The good news is, Mr. Miracle is everything you’d expect from a Tom King/Mitch Gerads book: smart, pretty, complicated and very accomplished (we’re told early on that Darkseid — who’s never seen here — has finally gotten the anti-life equation, and can now play with people’s history and minds, and that certainly seems to be what’s going on… but the point is, who can tell? The paranoia is practically a character). The bad news is, this comic sold out immediately, and if you didn’t have it reserved on your pull 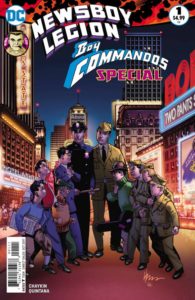 list, or already have it because you came in earlier in the week to get it, it’s gone. Wait a few weeks for the inevitable second printing, and you’ll be able to catch up on its twisty, existential ride. Newsboy Legion/Boy Commandos Special is DC’s Jack Kirby tribute for the week: Howard Chaykin, doing a WWII-set team-up between those two Joe Simon/Jack Kirby kid groups, plus a reprint of one of their 1940s Newsboy Legion/Guardian tales. Comparing the two is instructive: Chaykin’s sleek, static compositions are pretty much the opposite of Kirby’s organic, wide-open energetic ones, but the strength of the concept, and the canny mix of character types, comes through successfully anyway, even 75 years after the originals. 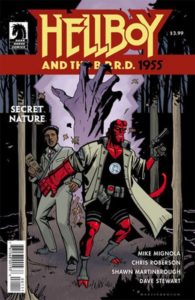 Of the newer indy titles, Hellboy is always welcome; he’s been dead for a while in the current Mignola continuity, but that doesn’t mean they can’t do stories from the past, and this one, set in 1955, early in his B.P.R.D. tenure, has the typical paranormal investigations, demonic horror, and punching, along with some pointed social commentary.  Redlands is a new occult/horror book about three witches taking over 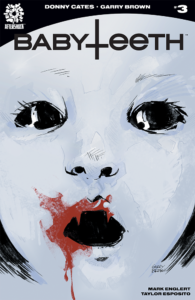 a small Florida town; Jordie Bellaire’s more known as a colorist and artist than a writer, but he gets points here for condensation: this debut starts at a climax that would have taken most other new comics three or four issues to get to, and then just accelerates from there, trusting readers to pick things up on the fly.  Vanessa Del Ray’s atmospheric art communicates all the needed information smoothly, and handles the horrific parts with chilling ease. Baby Teeth is another horror book, a demon-child one from hot writer Donny Cates; like his God Country and Redneck, it’s a familiar 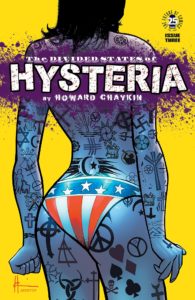 genre tale elevated by smart plotting and attractive characterization. Divided States of Hysteria is Howard Chaykin’s newest series, with a very-near-future US rocked by turmoil and terrorism;  millions of people have died in a New York City bombing, and the US agent on whose watch it occurred has gathered a Dirty Dozen-type quartet of prison inmates to take down the people responsible. It’s typical Chaykin, hard-nosed and cynical; it’s achieved some online controversy from people who can’t tell the difference between the opinions and words of fictional characters and those of their 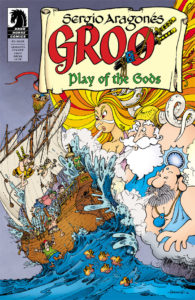 author, but its only real sin is that, so far, none of the many characters introduced are in any way likable — but that’s typical Chaykin, too, and if you’ve enjoyed his earlier work there’s a good chance you’ll like this, too. Same for Groo: after almost 35 years of Sergio Aragones’s (and Mark Evanier’s) cheese-dip loving, accident-prone, amiably-dim-but-deadly barbarian, it should be a known quantity; if you don’t know it, then by all means get this issue, and see if the detailed, cartoony art and intricate, inevitable-disaster plotting aren’t just as funny as all the rest of us keep saying they are. 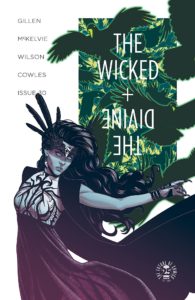 Of the remaining indy titles, Wicked and the Divine gets by on Jamie McKelvie’s clean, energetic art (most 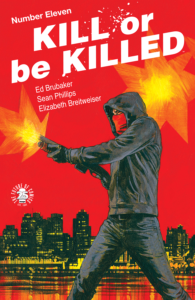 of the issue is a guy sitting and talking to other people in the dark, and somehow it still looks great…), and Kieron Gillen’s fascinating, interwoven character relationships: it’s like a co-ed college dorm, except that everyone has mythological/avatar powers and they’re all going to be dead in two years. Kill or Be Killed seems to have answered whether its bad-guy serial killer is being

hounded by a demon, or is just plain crazy — except that, as the character himself muses, there’s still a good case for either option being true; it’s the usual noir suspense from Brubaker and Phillips, who’ve been work that genre as well as anyone in comics for quite a while. Richard Corben, whose Shadows on the Grave is out this week, has been around even longer, and any comic with four of his black-and-white, airbrushed EC-inspired tales (five, counting the back cover) should be worth the money for any serious comics horror fan.

With 40 years of experience in comic reading, collecting and reviewing, English Professor Phil Mateer has an encyclopedic mind for comics. Feel free to ask Phil about storylines, characters, artists or for that matter, any comic book trivia. He will post your questions and answers on the AABC blog. His knowledge is unparalleled! He is also our warehouse manager, so if you are looking for that hard to find comic book, ask Phil!
View all posts by Phil →
This entry was posted in New Comics, Reviews and tagged Baby Teeth, Captain America, Defenders, Divided States of Hysteria, Generations, Groo, Groot, Hellboy, Hulk, Inhumans, Jack Kirby, Kill or be Killed, Mr. Miracle, Redlands, Richard Corben, Secret Empire, Spider-man, Squirrel Girl, Thor, Wicked and the Divine. Bookmark the permalink.