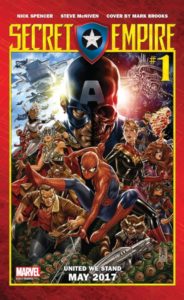 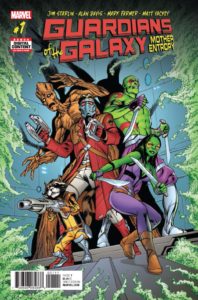 Of the Marvel first issues this week, Secret Empire has the most buzz: a fascist takeover of the United States by a Captain America who, thanks to a time-altering cosmic cube, has now always been a sleeper agent of Hydra. This is actually better than you might think — the takeover itself has already occurred, thanks to the last six months of Cap’s own book and Secret Empire #0, so we get life under the new regime, where the trains all run on time and the population is happy and prosperous, but not, you know, free, and resistance fighters, including one familiar name, get executed by firing squads. Naturally, since there’s a cosmic cube involved, it can all get erased eventually, so this is more like a “What If?” tale than most crossovers, 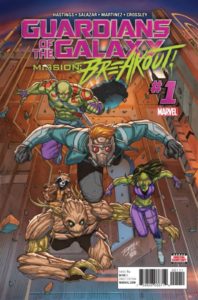 but there’s a delicate balance between Steve Rogers’s natural decency and his now-strongman tactics, and watching the old Nazi fighter as the leader of a dark regime works surprisingly well (whether it’s actually worth a total of ten semi-monthly issues is yet to be determined…). Next, there are two Guardians of the Galaxy books out (movie!), with the first issue of the Jim Starlin-written mini-series, GOTG:Mother Entropy, the most notable, just because Starlin either invented or appropriated most of Marvel’s cosmic entities long ago, and so always knows what he’s doing with them; the old-school Alan Davis/Mark Farmer art team makes the large cast of 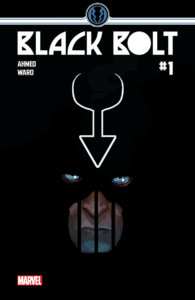 aliens and familiar faces look great, and this should attract a lot of older fans. More-recent ones, drawn by the movie, should find Mission:Breakout effective as well: as a one-shot, it doesn’t require the commitment of the mini-series, and it’s a decent-enough space-prison tale that showcases all of the group’s members effectively. Black Bolt sees the former leader of the Inhumans in his own solo series; it’s a prison-breakout story, too, but with a twist at the end. It’s got some nicely-designed art and coloring by Christian Ward, especially on a couple of big splash pages, but only time will tell whether that be enough to break the low-sales curse of the Inhuman books. 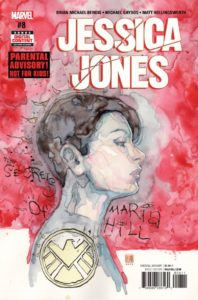 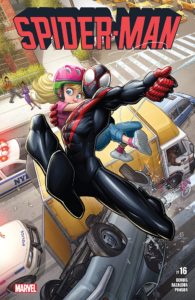 Of the regular ongoing Marvel issues, X-Men:Gold continues to be a callback to the ’80s Claremont era (not a surprise, considering they titled the first arc “Back to the Basics”), with familiar faces, characterization and themes; those elements made this series a top seller for a very long time, so it will be interesting to see if they can do it again — if you have fond memories of that period, this might be worth a look.  Jessica Jones is early into a new story involving a fugitive Maria Hill showing up at 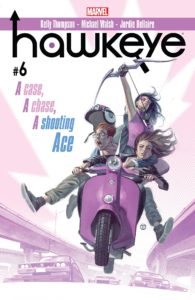 Jessica’s office, shot and bleeding; it’s the same noirish-superpowers tale that Bendis and Gaydos have been providing for their prickly PI since the beginning (and that worked so well in the TV series), so it’s an automatic buy. Spider-Man is Bendis’s other baby (he’s been chronicling a version of this character since Ultimate Spider-Man #1, seventeen years ago ), and if you’ve been wondering about Miles Morales and his costumed career, this is a good check-in issue; with a number of subplots given a couple of pages each, 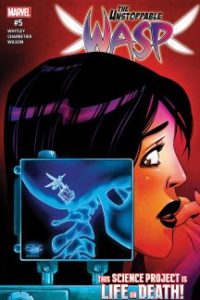 illustrated with clear and good-looking art that’s almost as attractive as regular artist Sara Pichelli’s, it should be more than enough to let you know if you should be a regular reader of this comic. Hawkeye ends its first arc (one that teamed up its LA-based private-eye title heroine with that other PI, Jessica Jones… plus a dragon) in fine fashion, with scripter Kelly Thompson using Kate’s combination of humor, brains and smart-ass feistiness to good effect, and Michael Walsh’s art providing just the kind of clean, sharp-lined graphics that’s been making comics like this a hit with the YA crowd that Marvel’s been courting for a while now. Unstoppable Wasp aims for the same audience, with another funny-but-smart 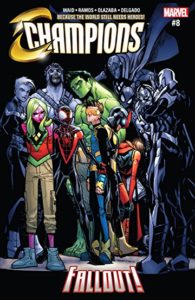 heroine, an ongoing girl-scientist-power theme that middle- and high-school STEM teachers should appreciate, and the same style of bright, just-cartoony-enough art. Over in Champions, artist Humberto Ramos has been a pioneer of that style for decades, and it works well with his and Mark Waid’s Teen Titans-like team of idealistic, empassioned kids who, despite their superpowers, have relationship conflicts, unexpected friendships, and problems with authority figures and bullies that should be familiar to a lot of their audience; if you find your comics today too dark, gritty and crusted with continuity to enjoy, these books might be just the antidote/breath of fresh air that you need. 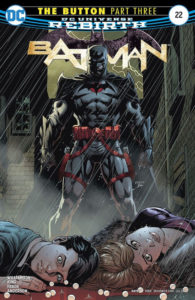 Batman continues the Watchman button/Flash crossover (complete with 3D covers), as “our” Batman meets the Thomas Wayne version from Flashpoint, leading to a 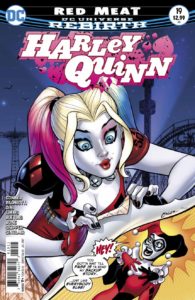 couple of emotional father/son moments in between the punching and kicking; there are also a number of questions raised about the “New 52/Rebirth” uber-plot that may or may not get answered in the final episode in Flash next week; either way, enough significant things are happening in this crossover to make it essential for any committed DC fan. Harley Quinn finishes an arc involving Harley versus New York City cannibals (hired by a corrupt mayor to eat the homeless, a good example of the twisted ambience of this comic), with bad guys who are more than bad enough for our heroine to let loose on, to deadly and entertaining effect; on top of that, the back-up story using the animated versions of Harley and the Joker (from circa Mad Love) by Paul Dini, Jimmy Palmiotti, 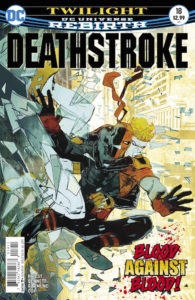 Bret Blevins and J. Bone continues; if you have fond memories of the cartoon, or the Batman Adventures comics and their like, you’ll want to read this. Deathstroke has a lot of moving parts in this week’s episode, with a wedding, a murder, the usual international intrigue, and a father/son fight that’s even bloodier than usual; Christopher Priest’s episodic, compressed writing style makes it fast and fun, and the Bennett/Rapmund art team manages to keep up and deliver on the key scenes and action sequences; this book hasn’t gotten a lot of publicity lately, but it’s managed eighteen issues of consistently smart, connected and well-constructed ongoing adventures of its title character, no small feat. 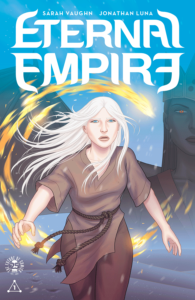 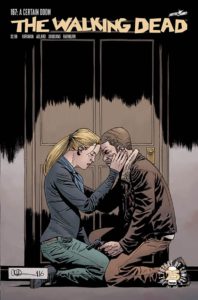 Eternal Empire is by the team that gave us Alex + Ada, a near-future sentient-robot love story that was surprisingly emotional and entertaining; here, they’re doubling down on the sf, creating a high-fantasy tale about a planet with three suns, magic, and a dystopian society ruled by an iron-willed Empress. Will the main character, an exploited and downtrodden worker, discover her true heritage and, eventually, rally the forces of her world to overthrow the dictatorship? That’s the usual through-line for a story like this, and since Alex + Ada took a similarly-predictable plot and made it work with crisp art and storytelling, Luna and Vaughn should do well with this one, too. I don’t 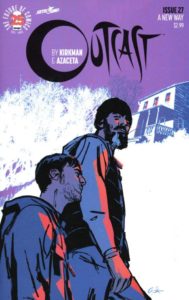 usually mention The Walking Dead here, but it’s worth noting that this week chronicles the death of a major character, with 44 pages of story and no ads at the regular $2.99 price.  The only non-story element is the inside back cover, a note from Robert Kirkman apologizing for the death, and arguing plaintively that he’s just as upset as anyone at it, but that sometimes the writer isn’t actually in control of the story; it’s an interesting look at the creative process (although fans of the TV show and not the comic will be confused by the whole thing, since the character involved died in that version quite a while ago).  Outcast, also by Kirkman, doesn’t offer nearly as dramatic a moment, but its story is accelerating and expanding, too, as Kyle’s father 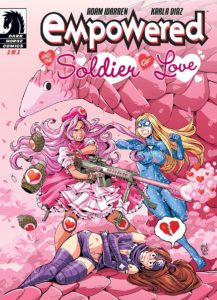 has shown up with some answers to the apparent demonic possession going on, and he’s helping Kyle get a handle on his powers. Kirkman, as Walking Dead and Invincible fans know, is a master at doling out plot twists, surprises and swerves, so there’s no way to tell where all of this will end up — just that it will be an entertaining ride. Empowered ends its mini-series run with a colorful, action-filled conclusion; Karla Diaz has a style that’s a good match for Warren’s, and his typically-clever scripting and characterization should make fans of this long-running, quirky superhero series happy. 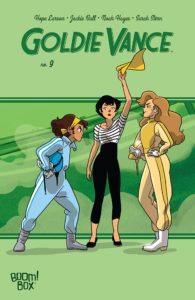 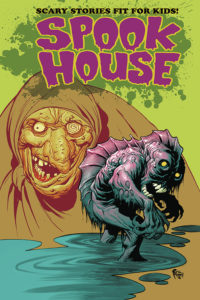 Goldie Vance is an all-ages book about a teen who works at a Florida hotel and is both a Nancy-Drew-like detective and a skilled mechanic and racer; it’s got a 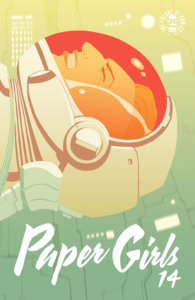 colorful, open style that puts it firmly in the YA category, and it’s a worthy companion to books like Lumberjanes or Hawkeye. Spook House is Eric Powell (The Goon) doing his own YA horror anthology book, reminiscent of the R.L. Stine Goosebumps series; unlike earlier issues, this only has one story written by him, and none with his art, but the other creators acquit themselves well here, and if you know younger fans who’d prefer chills over superheroes, this is a good choice for them. 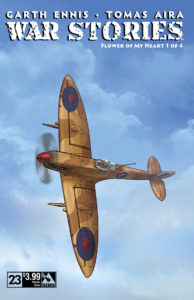 Paper Girls keeps expanding its adventure-story world, thanks to its time-travel plot, with the core title group of ’80s suburban kids now hooked up with other, similar girls from the far past and future; if you’re a fan of other Vaughan books like Saga, you know how good he is at keeping the plot brisk and twisty, and the characterization solid; Cliff Chiang continues to be a good match for him, with a style that can handle both the adventure and the emotional beats well. War 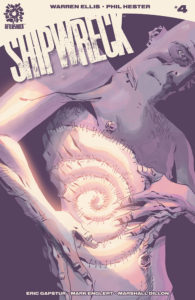 Stories is Garth Ennis telling tales of combat; he’s been focusing a lot on English WWII fighters lately (not a surprise, considering his background), and this issue begins a new arc focusing on British air fighters in the North Africa arm of that conflict. Shipwreck is by another writer who got famous in the ’90s, Warren Ellis, one of his stories that started out as a hallucinatory mystery, and is gradually revealing the techno-hubris that led its character to his weird fate; as with Ennis, if you’re already a fan of his writing, you’ll want this, although if you’ve never encountered either writer there are probably better places to start (Preacher and Transmetropolitan, respectively, if you want to see what made them famous in the first place…).

With 40 years of experience in comic reading, collecting and reviewing, English Professor Phil Mateer has an encyclopedic mind for comics. Feel free to ask Phil about storylines, characters, artists or for that matter, any comic book trivia. He will post your questions and answers on the AABC blog. His knowledge is unparalleled! He is also our warehouse manager, so if you are looking for that hard to find comic book, ask Phil!
View all posts by Phil →
This entry was posted in New Comics, Reviews and tagged Batman, Black Bolt, Champions, Deathstroke, Empowered, Eternal Empire, Goldie Vance, Guardians of the Galaxy, Harley Quinn, Hawkeye, Jessica Jones, Noble, Outcast, Paper Girls, Secret Empire, Shipwreck, Spider-man, Spook House, Walking Dead, War Stories, Wasp, X-men. Bookmark the permalink.