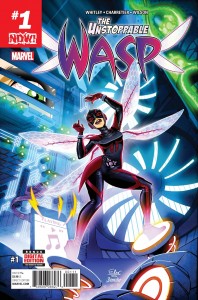 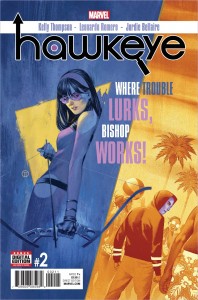 The Unstoppable Wasp really wants to be The Unbeatable Squirrel Girl, and shares a lot of its DNA: it’s built to attract elementary, middle-school and even high-school girls, with a teen hero who’s “unstoppable” because of her optimism and enthusiasm, whose adventures are rooted in Marvel continuity but presented in a bright, clean, all-ages 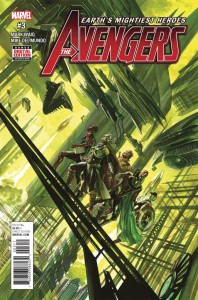 style. It occasionally slides into preachiness, but gets by on charm, smarts and a main character who really is an attractive, and affirming, role model. Marvel has built an imposing line-up of books for this young, scholastic audience, the same one that drove manga sales so high in the early ’00s, and as older readers fade away it looks more and more like a canny business strategy — and a source of some of the best comics on the stands right now. Witness Hawkeye, another member of that group, with yet another smart, idealistic, can-do heroine, along with an LA/private detective setting and stories in the same brightly-colored, 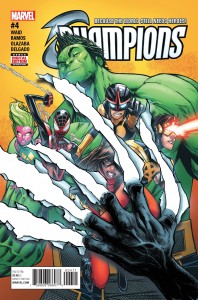 precisely-lined style. Even old-school books like the current Avengers are getting in on the trend, with author Mark Waid, who’s always been sympathetic to themes of diversity and tolerance, including the new Wasp as a major part of the current Kang/time-travel arc, and artist del Mundo contributing color-drenched, fluid painting that at first seems the opposite of the clean-lined style of the newer books, but on closer inspection has some of their same openness and attractiveness. Those trends are even more pronounced in Waid’s The Champions, a book specifically meant to showcase Marvel’s idealistic teen heroes, boy, girl and synthezoid, with themes of standing up to bullies and tyrants of 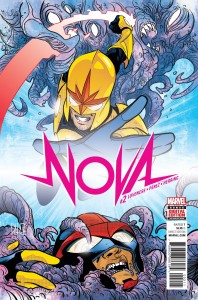 all types, whether Middle-Eastern religious extremists, Atlantean isolationists or more home-grown threats; watching the core group of young legacy characters (Ms. Marvel, Spider-Man, Nova, the Hulk, Cyclops and Viv Vision) bond and figure out their leadership roles has been fun so far, especially with Humberto Ramos’s ability to handle both the serious adventure and the lighter humor with his usual cartoony flair.  Nova continues that title’s relaunch, with Sam running into his predecessor, Rich Rider, who’s back from his “death”; Perez’s sleek modern style, plus Sam’s age and membership in the Champions, makes it a logical companion to the other comics in this group. 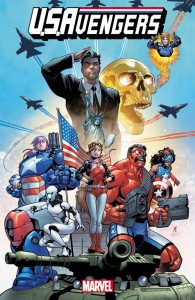 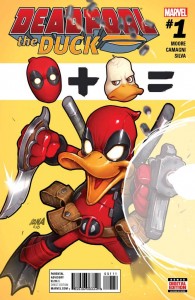 Costa/Sunspot, and the idea that he’s taken over the former A.I.M. and repositioned it as an Avengers organization, with a Chinese-American lab-rat woman who’s crafted a non-weaponized Iron Man suit and is the new Iron Patriot, plus the Norwegian-American Enigma, the Canadian-American Squirrel Girl, a Red Hulk who’s an Army general but not Thunderbolt Ross (and can only access the Hulk powers for one hour each day), the Kentucky-American Cannonball, and the female future-American version of Captain America.  This first issue does a smooth job of introducing everyone and showcasing their powers (as they fight a takeover attempt by the Secret Empire), while also 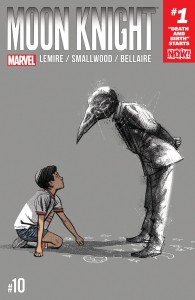 establishing what looks like the next ongoing threat: a gold-skulled pirate with a get-yours philosophy and sympathy for the 1% that would probably get him tapped as Secretary of Commerce in the new presidential administration. Deadpool the Duck is a mini-series whose title tells you pretty much everything you need to know about it; the first issue sets up the mashup premise, by getting Wade and Howard together and merging them (thanks to a rabid Rocket Raccoon), and otherwise you’re either going to find the concept amusing… or not.  Check out the cover, up there to the left, and see.  Moon Knight continues to showcase Jeff Lemire’s clever writing (he’s been integrating the main character’s personalities and modifying his origin, all while 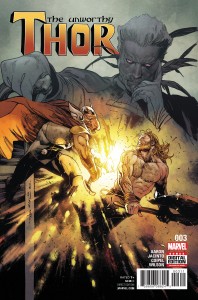 telling a a suspenseful adventure story leading to a confrontation between Spector and Khonshu, the god-like Egyptian being who originally gave him his powers) and Greg Smallwood’s lively art, which has handled all the twists and turns with clarity and skill, both in the small human conversations and the big cosmic blow-ups. The Unworthy Thor, meanwhile, keeps chronicling the tale of how the now-disgraced Odinson gets another hammer… maybe, since right now the Collector has it, and isn’t inclined to give it up; if you miss the male-Thor stories by Aaron from a few years ago, here he is, with artist Coipel providing a suitably-shadowy, heroic-mythology style to the telling. 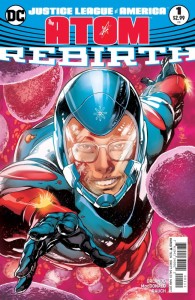 The Fall and Rise of Captain Atom #1 (of 6) — Writer: Cary Bates with Greg Weisman;  Art: Will Conrad;  Colors: Ivan Nunes 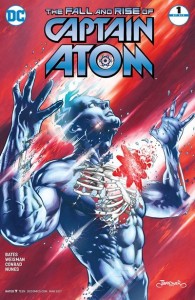 The Atom: Rebirth comic is part of a larger Justice League: Rebirth sequence, presumably involving other JL-related heroes who aren’t launching their own books; it’s got the origin of the Ryan Choi version of the Tiny Titan, as he shows up at Ivy University as an undergrad, and ends up as Ray 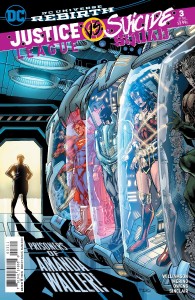 Palmer’s lab assistant and confidant. Then, when Palmer gets into trouble in his costumed identity… well, you can guess. Captain Atom attempts something similar, showing us a Nathaniel Adam whose powers are spiraling out of control, leading to possibly planet-altering effects. The interesting news here is that the mini-series writer is Cary Bates, responsible for a ton of DC stories in the ’70s and ’80s, especially Superman-related; he made his reputation on clever continuity- and character-heavy tales, 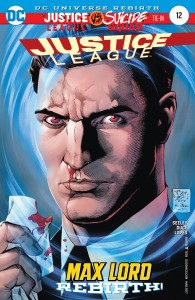 and it looks like he’s still doing that here.  Justice League vs. Suicide Squad sees the JL captured and held at Belle Reve by Amanda Waller; although the resolution of that thread is anticlimactic, it does lead up to the inevitable team-up against the larger foe, in this case Max Lord and his motley crew of bad guys, including Classic Biker Lobo and Dr. Polaris. Justice League itself offers a JLvs.SS tie-in; as the cover shows, it’s a spotlight on Max Lord, with an origin of sorts, and a look at an earlier confrontation with Waller which helped lead to the current crisis; it does its job as a tie-in, if that’s to offer an expanded view of events important to the main series. 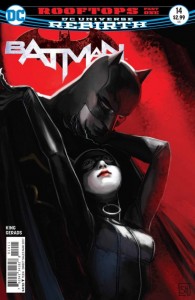 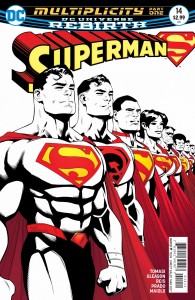 Batman offers the first of a two-part Batman/Catwoman romantic encounter, with moody nighttime/rooftop art by guest artist Gerads, and a story with the emotional punch you’d expect from King, who’s quickly become one of DC’s top writers. Superman is noteworthy because it starts a new arc involving the Multiverse, as “our” Man of Steel gets a visit from the Justice League Incarnate (the dimension-spanning collection of heroes 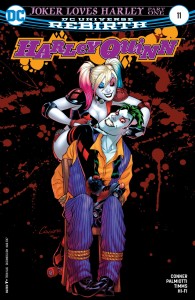 gathered by Grant Morrison in his Multiversity series), leading to a tale that might reveal some of the secrets of the “Rebirth” universe, and its behind-the-scenes manipulators; if you’re interested in the DC over-story, this is a comic you’ll want. Harley Quinn continues to be better — funnier and, somehow, given its crazy lead character and her rich fantasy life, more grounded and human — than it has any right to be, largely thanks to the Connor/Palmiotti writing team; this issue is the first of a two-parter featuring the Joker, who’s trying to restart their relationship, so it’s a good time to check in on the Brooklyn Bombshell. Shade, the Changing Girl keeps chronicling its tale of a 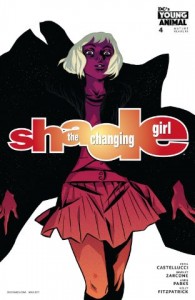 birdlike alien who’s taken over the body of a comatose high school girl, and has to navigate her present and former lives, while dealing with the madness vest that threatens to overwhelm her.  As with Buffy the Vampire Slayer, the sf/fantasy trappings also work as metaphors for the high school experience, and end up making some cogent points about relationships, getting through hard times, and dealing with not being perfect; between this, Doom Patrol and Cave Carson, the Young Animals imprint has been a storytelling success for DC so far (although it’s still too early to tell whether it’ll be a commercial one too…). 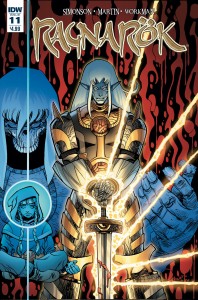 Not that many indy books this week, but they’re of high quality. Ragnarok is Walt Simonson’s story about what happens centuries after the fall of the 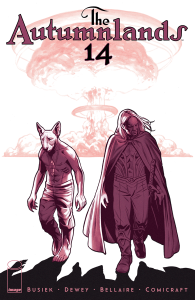 Norse gods, with a revived but skeletal Thor trying to set things right. It’s dense, lush, expert tale-telling; Simonson’s original run on the Marvel Thor was often about the nature of heroism — honor, sacrifice, duty, bravery — and those themes continue here. There’s a book collection of the first six issues, Last God Standing, and anybody who ever liked those original Simonson Thors will get a couple of hours of pleasure out of it.  Autumnlands closes out its own 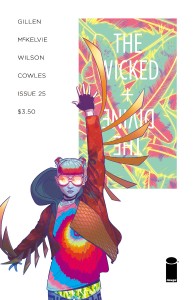 second book with a couple of revelations and explosions, with some Roger Zelazny-ish god/avatar flourishes that show how solidly, and smartly, it’s built on sf/fantasy traditions; like Ragnarok, it’s an ongoing series with an addiction-forming first-arc book collection. The Wicked and the Divine is now on its 25th issue, long enough to have developed a rich world, and a loyal following; if you like Gillen and McKelvie’s own stylized, modern version of the god/avatar meme, there are already four collections available, along with their earlier Phonogram series and, probably,  their best collaboration: the Marvel Young Avengers.

With 40 years of experience in comic reading, collecting and reviewing, English Professor Phil Mateer has an encyclopedic mind for comics. Feel free to ask Phil about storylines, characters, artists or for that matter, any comic book trivia. He will post your questions and answers on the AABC blog. His knowledge is unparalleled! He is also our warehouse manager, so if you are looking for that hard to find comic book, ask Phil!
View all posts by Phil →
This entry was posted in New Comics, Reviews and tagged Atom, Autumnlands, Avengers, Batman, Champions, Deadpool, Harley Quinn, Hawkeye, Justice League, Moon Knight, Nova, Ragnarok, Shade, Superman, The Wasp, Thor, U.S. Avengers, Wicked and the Divine. Bookmark the permalink.