Lots and lots of good comics this week (whatever happened to the last week of the year being a quiet skip week?), and remember: the All About Books and Comics New Year’s Day sale is, duh, Sunday, and all of these, and a bunch more, should be available there! 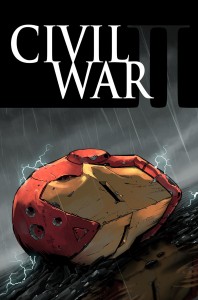 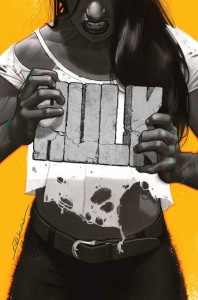 Civil War II finally ends, bringing with it a couple of tie-in books, plus two first issues stemming from the events in that mini-series. CWII itself has the big fight that you’d expect, plus a resolution to the Ulysses conflict that’s logical enough (in a super-hero-y/cosmic way), but not before we get a number of splash pages of his future visions that, presumably, set up the next year or two of events in the Marvel universe (and are by a series of guest artists, including Adam Kubert, Alan Davis, Esad Ribic, Mark Bagley). Hulk #1 features Jennifer 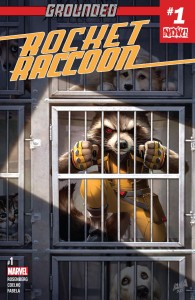 Walters (Bruce Banner being dead, and all…), as, healed in body but not mind, she goes back to work as a lawyer, but has a number of inner demons to wrestle. This incarnation of the title is just about halfway between the brighter, lighter previous few versions and the grimmer and grittier style of the “classic” Hulk, and gets points for packing in a bunch of engaging and interesting narrative elements, even though there’s no actual green skin or transformation in it… yet. Rocket Raccoon sees its title character stranded on Earth, which doesn’t help his perpetually-pissed 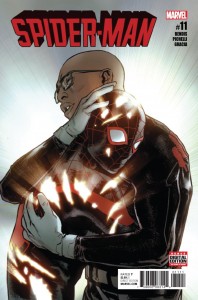 personality one bit; instead of going Scottie Young cartoony, it uses a more mainstream style, and Rocket’s stranger-in-a-strange-land predicament makes it akin to early Howard the Duck; Rosenberg, wisely, doesn’t try to imitate Steve Gerber’s knife-edged social satire, but even so it’s an intriguing set-up,  with its well-known protagonist and looming movie sequel offering a decent chance of success. That leaves the two tie-in books, both by CWII writer Bendis: Spider-Man 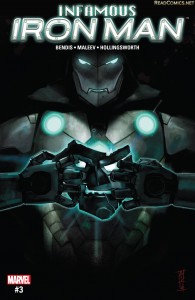 focuses on Miles’s father (who, unbeknownst to him, is a semi-retired S.H.I.E.L.D. agent), and sees the welcome return of regular artist Sara Pichelli, while Infamous Iron Man has a Doctor Doom/Thing battle with a reverse-polarity twist where we’re actually rooting for Doom; that by itself makes it worth a look.   Spider-Man has been Bendis’s best-written and most passionate super-hero project for the entire 21st century, ever since Ultimate Spider-Man debuted in the fall of 2000;  that Claremontian longevity and level of fan loyalty offers its own rewards. 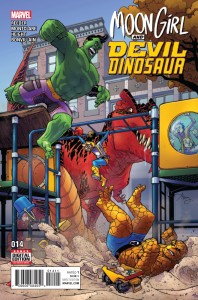 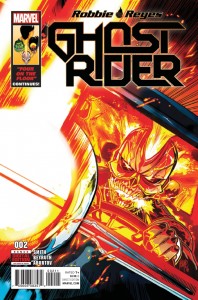 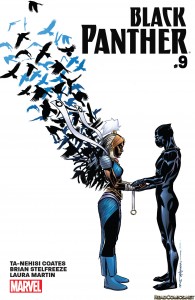 Of the other Marvel books, Moon Girl and Devil Dinosaur has two guest stars, the Thing and the Hulk (Amadeus Cho version), so naturally they fight, and it’s Lunella and her big red friend who have to keep them from tearing up Yancy Street; there’s also an appearance from Doctor Doom, but one who’s still in the old mask and much crazier than the newer version. Whether this is a feature, or a bug, will have to wait another issue or two to 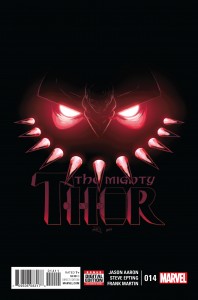 resolve, but the comic itself is as fun as always.  Ghost Rider also guest-stars the Hulk (who’s made it all the way from Yancy Street to east LA for the occasion), as well as the X-23 Wolverine; they’re fighting a monster who can absorb their powers, so that takes up most of the issue, while the regular cast only gets seven or eight pages — although we’re set up for a big confrontation between everyone for the next issue. Black Panther has really clicked into place; Coates seems much more comfortable with the comics format, and all 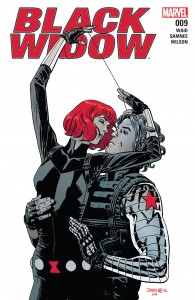 the pieces he’s been laying out for the last eight months are coming together and paying off handsomely, proving that he had a clever plan all along (also, that’s a striking cover up to the right there, by regular artist Stelfreeze). Thor features Malekith raiding the domain of the Light Elves, aided by a new version of Kurse, and pretty much destroying everything, or everyone, he touches. Thor and the League of Realms try to stop him, while Loki, as always, seems to be playing everyone against the middle; guest

artist Steve Epting shows his experience as a super-hero artist by making everyone good-looking, in his realistic style, while also handling the fantasy and action elements with clarity and skill. Chris Samnee, over on Black Widow, has a similar clarity and skill, although in service to a much more minimalist style; he’s playing Alex Toth to Epting’s Neal Adams, as he and Waid bring the Winter Soldier, Natasha’s former partner and lover, into the book. Spider-Woman features Jessica, whose own partner has apparently been killed by the Hobgoblin, gearing up to take 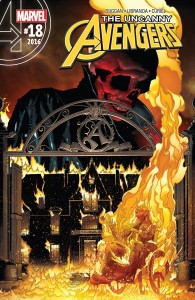 revenge, helped partly by Carol Danvers, who, post-CWII, is trying to mend fences with her former BFF. This book’s more appealing when it’s light-hearted instead of grim; here’s hoping that Roger’s death turns out to have been a feint.  Finally, Uncanny Avengers is worth a look because they’re finally getting back to the Red Skull plot that originally launched this comic, with Deadpool, Cable, Quicksilver and Rogue in a high-stakes fight against the crimson-hued Nazi and his stolen mind-manipulating powers; if you’ve been waiting for the last year for this subplot to be resolved, here you go, at least as a start. 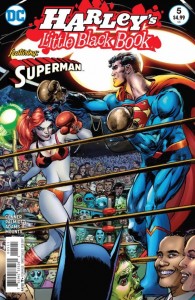 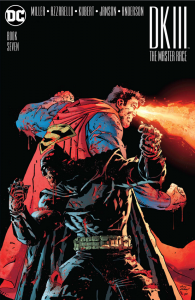 When I saw the cover to Harley’s Little Black Book #5, by Neal Adams, with Harley and Superman in a boxing ring, I immediately recognized it as a refry of his Superman vs Muhammed Ali cover, and thought, man, all the guy’s doing now is recycling his previous work, for no reason. Not so: it turns out that the whole book is a take- 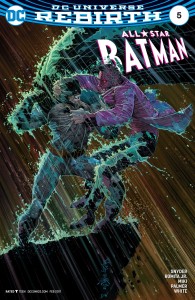 off on that iconic ’70s treasury edition, with Palmiotti and Connor substituting their Brooklyn bad girl for Ali, and Adams drawing the entire 38-page story. That’s the advantage of a bigger-sized quarterly book like this: it can accommodate super-special, time-intensive projects, and whether you’re a Harley, Superman or Adams fan (or all three), you’ll find this a bargain at its $4.99 cover price. DKIII has a nice-looking Miller cover (although it’s a scene that’s actually from last month’s issue), and the bonus mini-comic inside has Miller pencils under Klaus Janson inks; the main story continues with a revived Superman, a seemingly-dead Batman, and the world beset by religious-extremist Kryptonians, so you can’t accuse anyone of thinking small 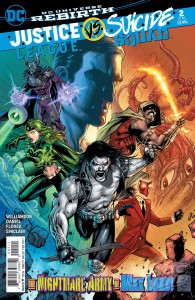 (although, come to think of it, the Atom’s in there too, looking ready to deliver a Palmer ex machina at the climactic moment), and it’s undeniably entertaining.  I’ve distrusted Azzarello ever since that long “For Tomorrow” Superman serial he did with Jim Lee twelve years ago sputtered to a disappointing conclusion, but still can’t resist this current effort. All-Star Batman, on the other hand, wraps up Snyder and Romita Jr.’s Two-Face epic in fine fashion; Snyder had his own problems with endings when he tried a long Man of Steel mini-series (Superman Unchained), but the Caped Crusader has always seen him at his best, and here he sticks the landing, resolves its conflicts satisfyingly, and even earns a smile at the finish; it should become a long-selling 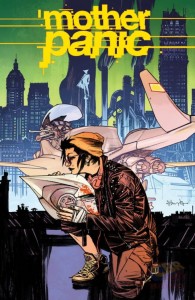 trade collection, but you don’t have to wait, or pay for that, when you can just buy the comic this week and get the same pleasure out of it immediately. As if those weren’t enough, DC has yet another giant-sized event comic out this week, also involving Batman: Justice League vs. Suicide Squad, which actually features a three-way fight between those two groups and a gang of supervillains led by… well, a mystery antagonist who’s familiar to JL fans; he was revealed last issue, but with a weekly book like this it’s best not to spoil things until everyone’s had at least a month to read it. This has been pretty decent so far, with its dozens of characters interacting, and fighting, for logical reasons, and each of the first two issues ending on a cool 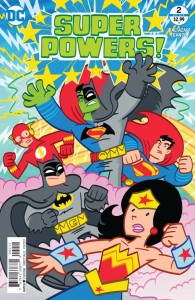 cliffhanger, so even if you’ve blown your DC budget on DKII and All-Star Batman, it’s hard to pass up. Mother Panic is almost a Batman book, too — it takes place in Gotham City, and members of the bat-cast show up in a few panels — but with its “Mature Readers” label it’s even darker than that already-dimly-lit corner of the DC universe; it’s like a ’90s Vertigo title by, say, Peter Milligan, all sleek cynicism and sophisticated nihilism, but transferred to costumed heroics instead (come to think of it, that was pretty much what the Milligan/McKeever The Extremist was about, so that puts this in good company…). Super Powers is worth noting because 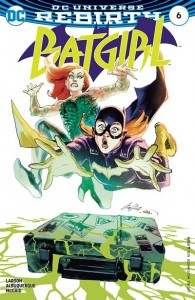 it’s one of those Baltazer/Franco all-ages books like Tiny Titans, irresistible to little kids but with enough in-jokes and continuity winks to make it fun for adults, too. That leaves Batgirl, which has had the unenviable task of following a very-well-regarded previous run with the character; the creators solved that top-a-good-story challenge by getting Babs out of the US and to Japan for the first five-issue arc; now, on the plane back to Gotham/Burnside, she encounters Poison Ivy, and the two have to work together to stop the flight full of passengers from crashing;  the results are as clever and entertaining as you’d hope. 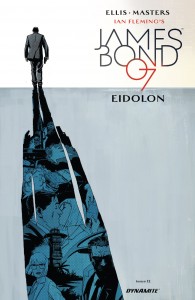 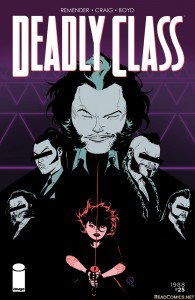 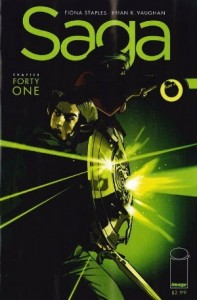 New Year’s Eve is fast approaching, so let’s look at these last books of 2016 quickly and then bow out: James Bond has been a year’s worth of Warren Ellis 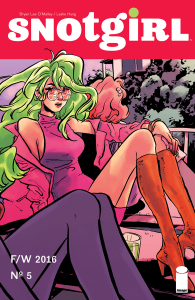 stories, in three different arcs; he’s very good at the twisty British-espionage stuff, and uses it all to good effect here. Don’t start with this conclusion, though — pick up the previous three issues, too, and read them all in one sitting, and you’ll have a smart, stylish spy story to start the new year. Deadly Class, after a few issues of introducing new characters and establishing information, is an all-out action issue, 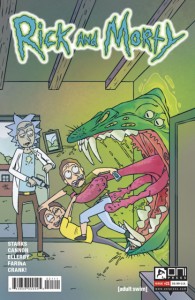 as Saya’s brother comes from Japan with a bunch of ninjas, whose orders are to kill everyone with her and take her home. Intricately choreographed and sharply cut, it would make a great fifteen minutes of a filmed version — if they could duplicate Craig’s stylish, high-contrast version of reality. Saga offers a decent jump-on issue, with a couple of resolutions and major-character spotlights, enough for new readers to know whether they’d like its high-end

sf/fantasy/adventure mix. Snotgirl, like Deadly Class, offers a twelve or fifteen-minute action sequence, except that it’s at a party instead of on rooftops, and it’s people talking instead of trying to kill one another… usually. Rick and Morty offers a typically sharp-edged other-dimensional tale, about a version of Jerry who’s an alpha-male leader and crosses over into the “real” world, while in Lumberjanes a now-mortal Diana 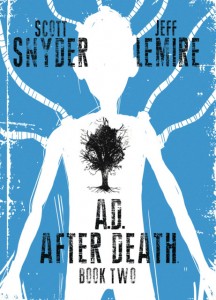 starts to readjust to camp life, in one of those codas-after-a-longer-story that gives the creators a chance to craft some clever character-development bits. A.D.: After Death is the middle of Snyder and Lemire’s three-book story about an apocalypse, and is as thickly-structured as a novel; Snyder alternates long pre-apocalypse-set text pages with the Lemire-drawn post-apocalyptic bits, with survivors high up in the mountains debating whether there’s any world to go back to, and it’s as mysterious and haunting as you’d expect from those two creators.

With 40 years of experience in comic reading, collecting and reviewing, English Professor Phil Mateer has an encyclopedic mind for comics. Feel free to ask Phil about storylines, characters, artists or for that matter, any comic book trivia. He will post your questions and answers on the AABC blog. His knowledge is unparalleled! He is also our warehouse manager, so if you are looking for that hard to find comic book, ask Phil!
View all posts by Phil →
This entry was posted in New Comics, Reviews and tagged After Death, Batgirl, Batman, Black Panther, Black Widow, Civil War II, Deadly Class, Ghost Rider, Harley Quinn, Hulk, Iron Man, James Bond, Justice League, Lumberjanes, Moon Girl and Devil Dinosaur, Mother Panic, Rick and Morty, Rocket Raccoon, Saga, Snotgirl, Spider-man, Spider-Woman, Suicide Squad, Super Powers!, Thor. Bookmark the permalink.