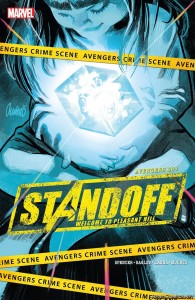 Two Marvel first issues, and a last one: Pleasant Hill, despite its title, has no Avengers in it; it’s more of a Prisoners riff (or Wayward Pines, if you’re too young for ’60s references), about a seemingly-tranquil community that’s actually a deternment camp.  We follow a blond young amnesiac who awakens there, and keeps trying to escape (we’re meant at first to wonder if he’s Steve Rogers, but it isn’t until the last page that we see his true identity), and gradually get that this is a S.H.I.E.L.D. -run facility for super-criminals, using cosmic cube fragments they’ve found to brainwash the bad guys and keep them 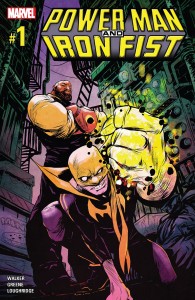 docile. This, of course, never ends well, and the ramifications of this issue will run through Marvel’s various Avengers and S.H.I.E.L.D.-related titles over the next two months: so if you buy any of them, you’ll want this too. Spencer’s been dropping hints in his The Ultimates that cosmic cubes work differently in the physics of the post-Secret Wars Marvel Universe, so it’ll be interesting to watch everything play out, and Bagley’s Everyman-like art is a good choice for the concept, so for what this is it seems pretty good.  Power Man and Iron Fist is a relaunch of that title, thanks to Netflix and its reintroduction of both Luke Cage (in its dark-but-excellent Jessica Jones series) and, soon, Iron Fist too; the longstanding bromance between the unbreakable-skinned urban brawler and the K’un-L’un-trained martial-arts innocent drives this first issue, as Danny wants to help their former office manager, just released from prison, while Luke is suspicious of her motives.  Walker brings a good mix of explanations for newer readers and continuity connections f0r older ones, while telling a full story that leaves room for new developments next issue (a rare art, that), and 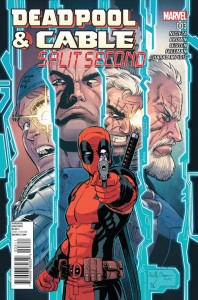 Greene’s got a just-caricatured-enough, pencil-centric style that reminds me of M. D. Bright; having read this, I’d come back for another one.  Finally, the Deadpool/Cable: Split Second mini-series reaches its end; given the movie’s popularity, this is a good time to be publishing Deadpool books, and this story, focusing on the Wade/Nate relationship, with a bunch of circular time-travelling and unravelling thrown in, has been just the right length to establish the duo’s own bromance, retcon a couple of Cable continuity glitches (leaving him with a cleaner slate), and stay true to Wade’s character, all while entertaining readers too: not a bad hat trick for a three-issue comic. 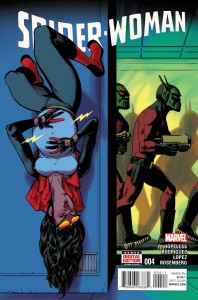 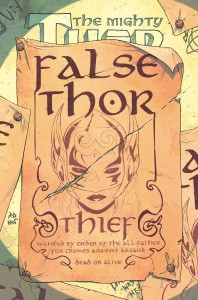 More Marvel books: Spider-Woman ends its first arc, and does so in high style: it’s taken a seemingly-stupid plot (Jessica’s about to give birth, and trapped by a bunch of Skrulls in a high-security hospital in the middle of a black hole), and turned it into a suspenseful and engaging action- and-character-fest with an affecting motherhood theme (both Hopeless and Rodriguez talk on the letters page about recently becoming first-time parents, and, corny as it is, that explains a lot about how they were able to elevate a possible jump-the-shark development like the pregnancy into a surprisingly-engaging, and 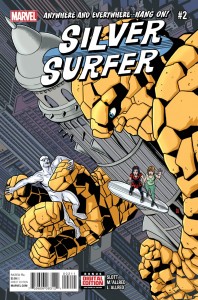 emotional, climax).  Mighty Thor‘s been similarly entertaining (and hitting similar emotional highs, as Jane Foster keeps sacrificing her health to hold the hammer and help the Nine Worlds), and this issue brings things to a climax, as we get the resolution of the Malekith story, mix in a little Loki, and, especially, watch everyone finally get tired of Odin and his self-involved third-person rants (“Odin is the way and the wrath and the wonder!… Odin is, was and will always be! None alive may say him nay!”), with a last-page confrontation cliffhanger.  Working on Thor brings out the Stan and Jack in many writer/artist teams, and here that means high adventure wrapped around some beautiful fantasy art by Dauterman; this is probably Marvel’s best straight-ahead super-hero book right 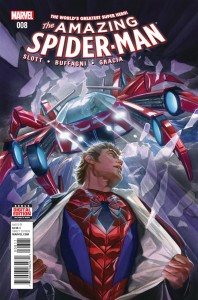 now. Silver Surfer’s early in its new volume, its hero on Earth with Dawn Greenwood and fighting a menace from his home planet which requires the help of other heroes — but when he goes to the Baxter building, it’s Parker Industries, and the Avengers are who knows where, and when he goes to Alicia Masters for advice she and Dawn have an awkward meeting (“So let me get this straight… you’re another earthgirl who’s traveled with the surfer?”), and he finally gives up and goes to confront the menace himself, but finds that… well,  it’s very entertainingly thought up by Dan Slott and visualized by the stylish Michael Allred, so get it and see.  Amazing Spider-Man, also by Slott, wraps up a Cloak-and-Dagger brainwashed-by-Mister-Negative story, and has turned into a fast-moving international-intrigue book (the next arc, 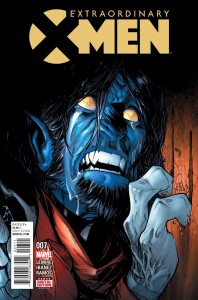 “Scorpio Rising,” looks like an extended Parker-as-James-Bond-with-super-powers conceit, to push the concept even further), not a bad direction for the character right now. Extraordinary X-Men, meanwhile, reads a lot like a late-80s Uncanny X-Men book (which means Lemire’s doing a good job), as Jean and Storm enter Nightcrawler’s mind to see what’s traumatized him, while the rest of the team (Old Wolverine, Colossus, Iceman and Magik) are on Weirdworld encountering Sunfire and filling in a few gaps about the Bad Thing Plot Device that Old Cyclops carried out right after Secret Wars when we weren’t watching, and that made the whole world hate all the mutants. This book still misses Humberto Ramos (the “Ramos” on the cover is Jay David Ramos, the colorist), but is a not-bad installment of what feels like the “real” X-Man series right now. 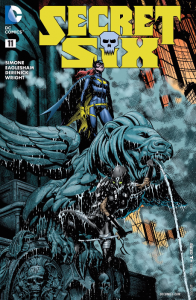 Secret Six is notable because it guest-stars Batgirl, whose adventures Simone wrote for a long time, and is her first shot at the modern millenial-friendly version of the character; it’s good for all the reasons it usually is. Superman: American Alien is a modern-day origin 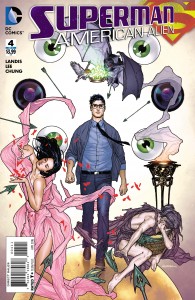 story (it could fit comfortably into the TV universe of Arrow and The Flash) that, this issue, gets us into Metropolis where college-student journalist Clark Kent has his first meeting with fellow-student-reporter Lois Lane, as they attempt to interview three new Facebook-style tech-industry entrepreneurs: Lex Luthor, Bruce Wayne and Oliver Queen; there’s also a World’s Finest first meeting that gives Clark some ideas about costumes and alter egos, and which should be particularly appreciated by everyone waiting eagerly for the Batman/Superman movie. 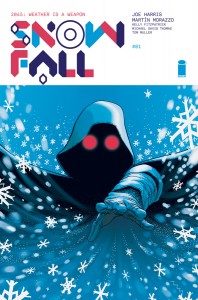 The only new indy book: it’s from the team that produced Great Pacific, and it’s about a near-future Earth where we’ve screwed up the climate so much it doesn’t snow any more, except that the mad scientist who originally tried to fix things and caused a disaster now has a make-it-snow gun, and… as usual, things happen.  As in many sf first issues, there’s too much look-at-the-world-building info-dump and not enough story, but it looks like it might round into something if given a little time. 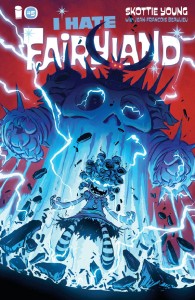 Five indy books for grown-ups: Stray Bullets is hard-edged suburban-crime noir, nearing the end of this volume as plans go astray, chances are taken, and boundaries are crossed; it still looks like it’s all going to end badly, as all true noir stories must.  I Hate Fairyland is its brightly-colored, cheerfully over-the-

top mirror-image, transplanting noir violence and existentialism into a Dorothy-in-Oz setting with sophomoric intent and hilarious (if guilt-edged) results.  Astro City, coincidentally enough, covers the same genre, as Busiek and Anderson revisit Steeljack, a Philip Marlowe-like PI who’s an ex-con with, literally, steel skin, a knack for life on the mean streets, and a weakness for dames with hard-luck stories. Bitch Planet gets back to 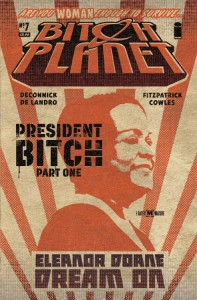 its main story after what seems like a very long time, but makes up for it with a lot of parallel plot developments and twists; its prison-planet, patriarchy-plagued cast could really use a couple of quick issues in a row to build its momentum now (the business model for books like this is Saga: generate six monthly issues, one satisfying chunk of story, and then collect it into a trade, promote it, take some time off, and repeat). Sex Criminals has had a similar long hiatus, and seen its story stall; that’s

exacerbated this issue, where Fraction gets his two female leads into a long-building clear-the-air confrontation, and then can’t figure out how to do it and instead gives us a four-page meta-discussion of him and Zdarsky talking about it that’s (a) sometimes very funny (thinking about Zdarsky’s Chuck Jones-ish sign in one panel makes me smile even now) and (b) pulls us totally out of the story and leaves us high and dry, neither knowing or caring what happened to the characters. This series began with a ton of promise, but is starting to look like it might end with a whimper, instead of the bang it deserves. 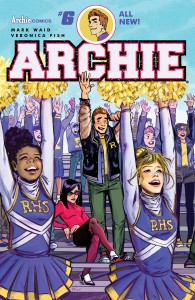 Three indy books for kids: Archie continues to be a 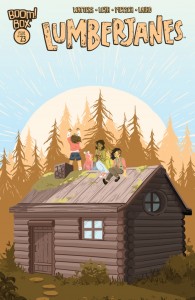 pretty-good more-soap-opera-ish look at the title redhead’s, and Riverdale’s, first encounters with the Lodge family (with their butler and Reggie Mantle playing important roles in this issue); Waid’s taking, like, seven or eight issues to tell a plot that in the ’60s Dan Decarlo would have handled in 12 or 16 pages, but if you can get past that it’s fun enough, and still recognizably Archie, after all.  Lumberjanes is in the 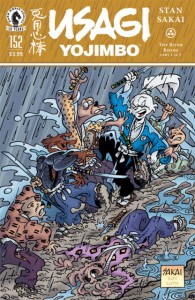 middle section of its own multi-issue arc, as Molly and Ripley help the bear-woman in the vortex dimension (the one with the dinosaurs), and the rest of the team tries to survive on a storm-tossed boat with the werewolf who’s also a sea-captain; Lord help you if this is the first issue of this book you’ve ever picked up, but it’s pretty good. That leaves Usagi Yojimbo, delivering another one-issue perfect story by Stan Sakai, about villagers trying desperately to protect themselves from a flooding river: it’s worth buying precisely because it’s always such a seamless, entertaining melding of art and story.

With 40 years of experience in comic reading, collecting and reviewing, English Professor Phil Mateer has an encyclopedic mind for comics. Feel free to ask Phil about storylines, characters, artists or for that matter, any comic book trivia. He will post your questions and answers on the AABC blog. His knowledge is unparalleled! He is also our warehouse manager, so if you are looking for that hard to find comic book, ask Phil!
View all posts by Phil →
This entry was posted in New Comics, Reviews and tagged Archie, Astro City, Bitch Planet, Cable, Deadpool, I Hate Fairyland, Iron Fist, Lumberjanes, Pleasant Hill, Power Man, Secret Six, Sex Criminals, Silver Surfer, Snowfall, Spider-man, Spider-Woman, Stray Bullets, Superman, Thor, Usagi Yojimbo, X-men. Bookmark the permalink.