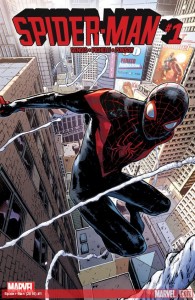 Three Spider-Man books in one week isn’t exactly a testament to Marvel’s shipping strategy, but at least they’re all very different.  Spider-Man is Miles Morales in the regular Marvel universe — and he’s one of only a couple people who even remember that there was any other universe, or a Secret Wars,  all because he gave the 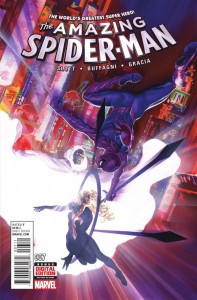 Molecule Man an old hamburger (see what kind of weird Jonathan Hickman plotting you missed if you didn’t read the mini-series?). The good news is that, with a script by Bendis and art by Sara Pichelli, he’s in his original creators’ hands, and they do a great job of making the 15-year-old Miles approachable and relatable, just another high-school student trying to juggle class, family, friends and a job… except that his job is being a superhero, and in the Avengers. That high-school setting makes the book feel like early-’60s Spidey comics, and with Peter Parker now a Tony Stark-like corporate CEO, there’s definitely room for that; Spider-Man fills it admirably, and since this is the first issue it’s a perfect jumping-on point. Amazing Spider-Man, meanwhile, follows the original guy’s adventures, and while it might be off-putting to old fans who prefer him as a Daily Bugle photog, his Parker Industries status is a logical development that acknowledges his growth as one of Marvel’s longest-running 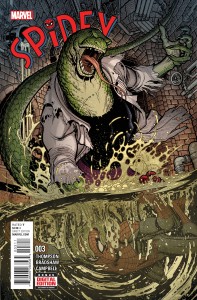 characters.  Writer Slott’s been at this a long time now, and makes the combination of bad guys (Mister Negative, with a flipped Cloak and Dagger helping him), sub-plots, supporting cast, humor and adventure look easy. Artist Buffagni’s got a couple of nicely-designed pages inside, and an Alex Ross cover’s always appreciated, so this offers a decent weekly dose of arachnid superhero. The third offering, Spidey, is a flashback to Peter in high school, but pitched to a younger audience than the Miles Morales Spider-Man. That audience should appreciate creators Thompson and Bradshaw’s well-made stories, although older readers may find they’re on very familiar, well-traveled ground. 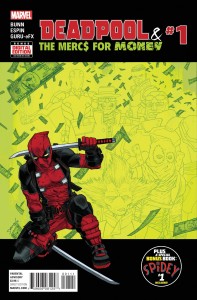 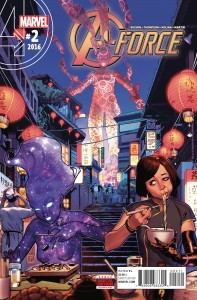 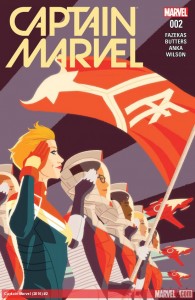 The rest of the Marvel books (it was a big week…) — Deadpool and the Mercs for Money is the only first issue, but it’s really just a continuation of the regular title, following the same plot involving Wade franchising his mercenary business to a number of 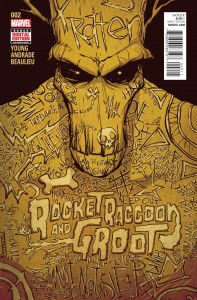 other superpowered opportunists, all of whom end up in a plot involving chasing after a mysterious crate. If you like Deadpool books, and haven’t exhausted your income on all the others Marvel’s producing, it’s perfectly fine — Bunn’s written his adventures quite a bit (he and Gerry Duggan seem to be the go-to Dead-head writers on the character right now — and it even includes a full reprint of the Peter-Parker-in-high-school Spidey #1, at no extra charge.  A-Force #2 is an improvement over the first issue, largely because it’s 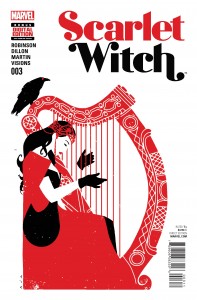 got a lot less Secret Wars-ish backstory to explain this time, and so can commence with the adventuring and the relationship-building among its group of female heroes. Good-looking art from Molina, and the chance to see the newcomer Singularity bring together She-Hulk, Medusa, Nico from Runaways, Captain Marvel and Dazzler, and have their personalities bounce off of one another, make this a worthwhile read.  Captain Marvel, in her own book, continues to be briskly-told sf, as Carol and Alpha Flight, manning an orbiting 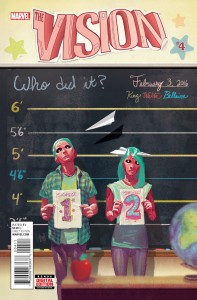 space station with a mission to defend Earth from the unknown, investigate a mysterious derelict spaceship ( a set-up which, as Carol herself acknowledges, never ends well…).  Rocket Raccoon and Groot is the middle of a three-part story involving the woody partner searching for the furry one, and recounting his adventures to a planetary dictator who may or may not be a brainwashed Rocket; as with the previous issue, it might seem kind of dark and static to new readers, but the set-up allows Young to cover a lot of narrative ground in a short time, and as a change of pace it’s fine — especially since the what-happens-next cover advertising next month’s issue looks to 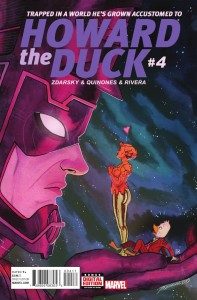 have the duo back to their regular slapstick-space-adventure form.  Scarlet Witch, behind a striking cover by David Aja, has Wanda in Ireland, trying to track down some darkly-intentioned rogue magic; the Irish scenes are all drawn by guest artist Steve Dillon (a logical choice, since he has a native’s knack for scenes set on the Emerald Isle), while the last few pages, which provide a bridge into the next issue, are by the more-impressionistic Chris Visions. Speaking of Visions… Vision #4 continues to enhance this series’s reputation as the best current comic you aren’t reading, as Tom King keeps spinning his creepy, quiet suburban horror story about the title character’s robot family and the unintentional grief they bring to their neighbors, with the tension going up considerably, and tragically, in the last few pages. If you 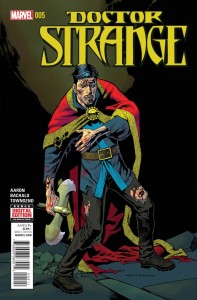 haven’t tried it yet, this issue isn’t a bad place to start — and it’s good enough to bring new readers back for more, and build the wider readership it deserves. Howard the Duck’s another comic that could use a bigger audience: writer Chip Zdarsky’s got the title fowl enmeshed in a story involving Galactus, the Silver Surfer, the Guardians of the Galaxy and other cosmic characters, and while it doesn’t have the unique philosophical resonance of the original Steve Gerber stories, it’s got its own off-kilter, snarky charm, with its weary, put-upon hero who just wants to be left alone, but somehow always winds up having to save the day. Jason Aaron’s treating Doctor Strange much like he did his first volume of Thor a couple of years ago, by having him face a multiverse-conquering, formidable foe over the first dozen or so issues of the comic. Here, things 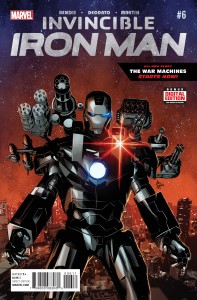 look very bad for our hero and magic in general (as they generally do at the halfway point of a story like this), but it’s a well-constructed tale, and as always the Chris Bachalo art is a considerable reward for the reader’s interest. That leaves Iron Man, which is mostly a transition story after the book’s first five issues, setting up Rhodey versus ninjas in Japan, and involving a long conversation between Tony Stark, his new love interest (no, not Mary Jane Watson…), and the new version of Doctor Doom at a waffle house: exactly the kind of scene that Bendis excels at (and Deodato’s the rare artist who’s good at both the conversational bits and the more-standard action scenes). 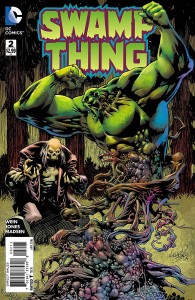 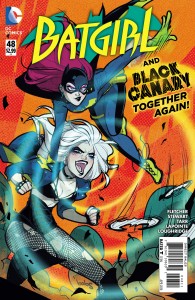 Three DC books — Swamp Thing continues to showcase Kelly Jones’s EC-inspired horror art as an efective fill-in for Berni Wrightson’s , as Len Wein gives his original creation plenty to do while battling a super-strong, vengeance-fueled zombie; as long as you don’t mind the kind of old-school scripting that gives the antagonist a name like “Lazlo Wormwood,” it’s a fun, nostalgic ’70s throwback.  Batgirl’s just the opposite: a very modern, cutting-edge comic, aimed squarely at 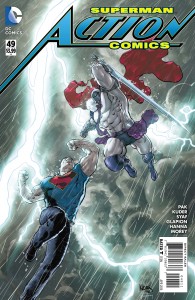 new readers, with an unapologetic animation/manga influence and a crisp narrative style perfect for multitasking millennials (it’s no wonder that this is one of DC’s most popular digital-download books, but whether on-screen or in print it’s an entertaining blast of fresh air, especially with guest star the Black Canary). Action rounds out the list, as Clark Kent gets his powers back — sort of, since his kryptonite-fueled recovery offers both advantages and disadvantages; either way, he still has to face a world-conquering Vandal Savage, as this serial continues to wind its way through Action, Superman/Wonder Woman, and Superman. 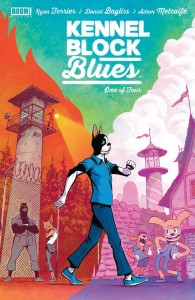 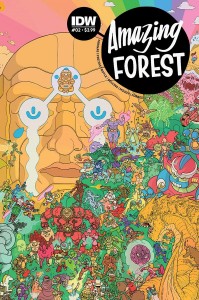 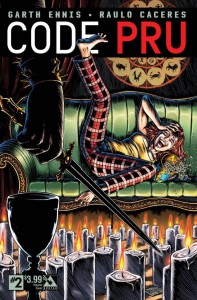 All the indy books of note: Kennel Block Blues is the one debut, and the most interesting — it’s a rookie-in- 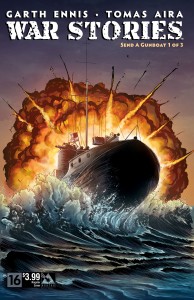 prison movie but with anthropomorphic characters, dogs and cats, incarcerated in a city animal pound where they’re all facing a death sentence if no one comes to rescue them.  The lead character, unjustly caught, is having a breakdown: in times of stress, he’s imagining he’s in a cartoon musical, and in those sequences the art transforms to a kind of early-Fleischer big-foot animation style, instead of his grim reality. Four issues 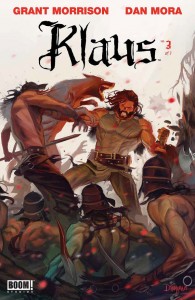 sounds about perfect for a conceit like this, and the first issue sets up the premise, gives artist Bayless a chance to prove his chops in both the animated and the serious styles, and briskly goes for the throat and gets our attention; it’s one of the better offerings by Boom! over the last couple of years. Amazing Forest is the second issue of an anthology of brand-new work by brand-new artists, although all the stories are co-written by the same two guys (which leads to a cool last-page connection). Caitlin Rose Boyle draws a detective story in a 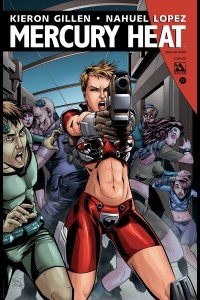 comic/European underground mode, while Angelica Blevins handles a Darth-Vader-as-corporate-climber parody with a mixture of different comic styles (including one character who looks like he wandered over from the webcomic Archewood).  Sean Pryor channels some of the primitive energy of early Golden Age science fiction comics, and Buster Moody gets back to classic underground, with a style that could have been in the back of a later issue of Zap: pretty cool stuff for the price of a 22-page Marvel or DC superhero book.  Garth Ennis contributes two books: Code Pru, a prequel to an ongoing series about a 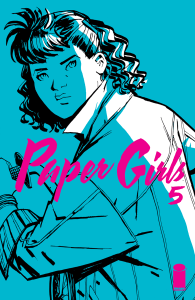 woman recruited by an organization that fights Lovecraftian and other occult menaces, benefits from Caceres’s detailed, almost woodcut-ish art, while War Stories is the first part of three issues about British gunboats patrolling the English Channel and fighting Germans during WW II.  Klaus continues Grant Morrison’s origin of Santa Clause (he’s a broad-shouldered, two-fisted woodsman fighting against a local toy-hating tyrant and his elder-god-worshipping vizier, which sounds like a parody of Grant Morrison comics but is actually pretty good), 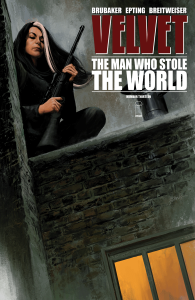 while Mercury Heat,  Kieron Gillen’s story about a hard-boiled, tech-enhanced woman cop on Mercury, sets up a last-page twist that, if I were a ’70s Marvel cover copywriter, I’d call “the most unexpected crossover of all!” Paper Girls is a typically-decent Brian K. Vaughan story with more-than-decent Cliff Chiang art, although if you haven’t picked it up by this fifth issue, you’d might as well wait and reserve a copy of the upcoming first trade instead, and Velvet is the Ed Brubaker/Steve Epting  spy thriller with a kickass, on-the-run female lead; it’s had a sporadic publishing schedule of late, but each well-crafted new installment is still welcome news.

With 40 years of experience in comic reading, collecting and reviewing, English Professor Phil Mateer has an encyclopedic mind for comics. Feel free to ask Phil about storylines, characters, artists or for that matter, any comic book trivia. He will post your questions and answers on the AABC blog. His knowledge is unparalleled! He is also our warehouse manager, so if you are looking for that hard to find comic book, ask Phil!
View all posts by Phil →
This entry was posted in New Comics, Reviews and tagged A-Force, Amazing Forest, Batgirl, Captain Marvel, Code Pru, Deadpool, Doctor Strange, Groot, Howard the Duck, Iron Man, Kennel Block Blues, Klaus, Mercury Heat, Paper Girls, Rocket Raccoon, Scarlet Witch, Spider-man, Superman, Swamp Thing, The Vision, Velvet, War Stories. Bookmark the permalink.