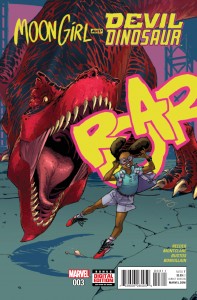 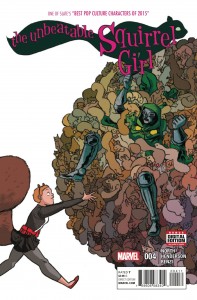 This is another week with a bunch of… well, not “kids’ comics,” but comics suitable for all ages; I’m an increasingly-aging white male, and, to varying degrees, I like them all. Moon Girl and Devil Dinosaur, for example, has been a delight so far, with its ultra-smart (she’s like a younger and much less annoying Amadeus

Cho), scrappy and adorable preteen heroine, who’s a poster child for every bullied bright kid out there; it’s no surprise that writers Montclare and Reeder are also the creative team behind Image’s similarly-empowering Rocket Girl. Mix in Natacha Bustos’s pitch-perfect art, and this is an entertaining book that deserves to be a hit. Squirrel Girl is cut from similar cloth — its indefatigable title character could be Lunelle of Moon Girl grown to college age, and with super-powers — except that, having been around longer, it’s already achieved its groove: a breezy, brainy, infectious mix of adventure and humor that’s very hard to resist. Pick up this issue, 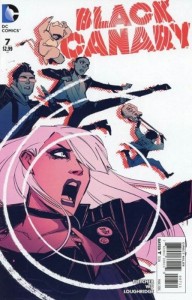 involving Darleen and crew tackling a time-traveling, world-conquering Dr. Doom, and see why some of us think this is the bright future of comics. Spider-Woman is more traditional superhero stuff, but very well done and modern — it’s heir to recently-concluded runs like the Fraction/Aja Hawkeye and the Waid/Samnee Daredevil — and watching its kick-ass, problem-solving heroine fighting against a gang of Skrulls (who’ve trapped her and a bunch of pregnant alien women in a hospital situated in a black hole… oh, and she’s pregnant and about to give birth, too, which slows her down only a little) is about as much fun as you can get out of any Marvel comic these days. Black Canary, over at DC, concludes its 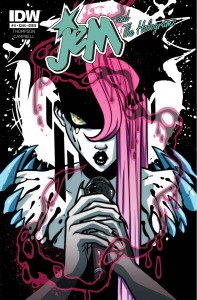 first arc with a bunch of revelations and a big old seven-page apocalypse-monster-versus-rock-band fight, told with no dialogue and only two sound effects — and if that sounds hard… well, you’re underestimating Batgirl writer Brenden Fletcher and, most especially, artist Annie Wu, whose imaginative panel designs and graphics make the whole thing sing, even silently.  That leaves the most unexpected hit of all, the IDW-published  Jem and the Holograms; if the disastrous movie last year had had one-tenth the spark, humanity and design/fashion sense that the Thompson/Campbell creative team delivers here, it would have been a hit too. 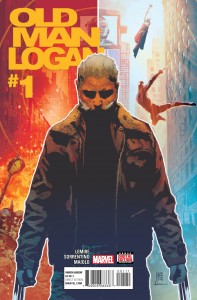 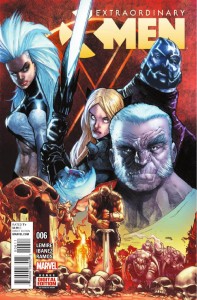 A couple of more-traditional Marvel books — Old Man Logan and Extraordinary X-Men are both by Jeff Lemire, and share the same alternate-universe Wolverine character; Old Man Logan follows him from his first appearance on “our” Marvel earth, before the events in Extraordinary X-Men, and is much shadowier (Sorrentino’s art reminds me of the similarly-textured Alex Maleev, whose Daredevil books 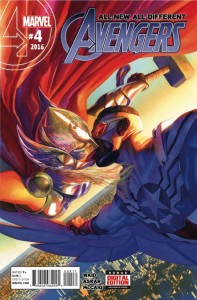 had a similar combination of dreamlike and gritty), while Extraordinary X-Men is a more traditional group-superhero book, with Storm, Colossus, Iceman, Nightcrawler, Magik and the young Jean Gray being added to the mix, and put through their paces by Lemire smoothly and well; the one disappointment is the lack of pencils by Humberto Ramos, whose art has contributed quite a bit of energy to the proceedings — but, given the book’s bi-weekly schedule, it’s clear why he needed a two-issue break, so that’s not a game-changer. All-New All-Different Avengers, meanwhile, continues to benefit from old pro 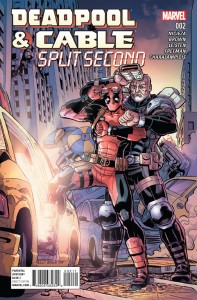 Mark Waid’s easy familiarity with the characters, and watching the new members of the team inter-relate (whether squabbling like Ms. Marvel and Nova or smooching like Replacement Cap and Replacement Thor) and learn how to fight together is most of the fun. “Fun” is the attraction of Deadpool/Cable, too, as Fabian Nicieza, another old pro, crafts a time-travelling circular-paradox trap for the two lead characters, and watching Wade, especially, try to get out of it without accidentally killing civilians (at least, not after the first ten times) and name-checking Groundhog Day provides plenty of entertainment. 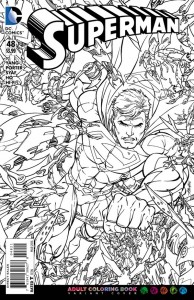 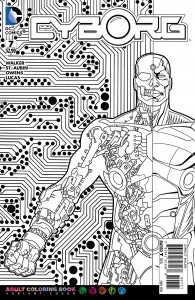 DC/Vertigo offerings, with Vertigo outpolling the main company. Suicide Squad Most Wanted is a decent deal: a mini-series anthology with two 20-page continued stories in each issue, one following Deadshot and one Katana, for $4.99; if you like the characters generally, you should like these offerings too (and it’s nice to see her creator and longtime Outsiders writer Mike W. Barr back in action).  Superman has 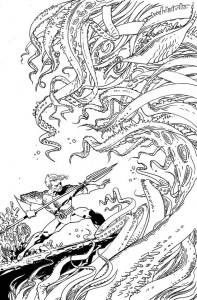 reverted to its ’90s storytelling style, with Superman, Action and Superman/Wonder Woman offering consecutive chapters of one big story: in this case, that of a depowered Clark Kent fighting a world-threatening Vandal Savage; in this installment, Clark tries to use kryptonite as chemotherapy, in an attempt to jumpstart his powers. Yang gives artist Porter a couple of decent splash-page opportunities, 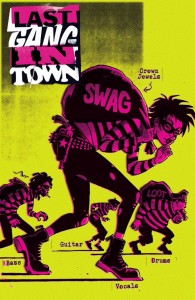 but let’s face it: with this setup, you’re either reading all of the super-titles right now, or none of them; the exception might be if you’re getting the coloring-book cover for this issue — and it’s a good one, with Classic Superman battling a swarm of robotic insects (if you’re looking for the whole set, the other variant black-and-white covers this week are Cyborg #7, Aquaman #48, Deathstroke #14, We Are Robin #8, Teen Titans #16, Lois and Clark #4, Grayson #16 and 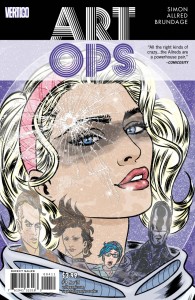 JLA #7; most offer standard super-character splashes, with Cyborg’s stylized circuit-board patterns and Aquaman’s battle against a multi-tentacled sea creature the most stylish exceptions). Over at the Vertigo imprint, Last Gang in Town is almost a parody of the company’s early years, with a Thatcher-era British-punk-rock plot that’s enlivened by the defiantly scruffy art by the wonderfully-named Rufus Dayglo (who brought a 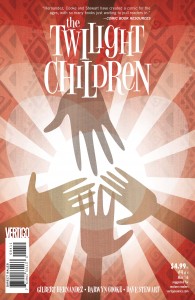 similar wild energy to Tank Girl a few years back).  Art Ops, about paintings come to life and a shadowy organization that protects them, suffers from having only about 50% Michael Allred art, and therefore being only 50% as good (he’s the only artist who can sell the book’s absurd premise).  Twilight Children, the Gilbert Hernandez/Darwyn Cooke collaboration, concludes with a burst of magic realism and murky plot, but is so simultaneously good-looking and haunting, and its two seemingly-disparate creators mesh so seamlessly, that it’s worth the effort. 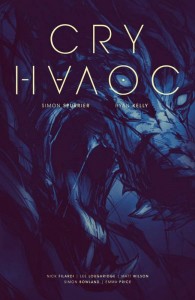 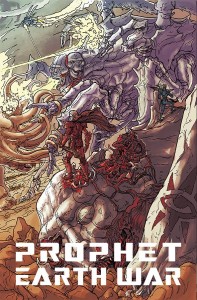 Four indy debuts: Cry Havoc, from the always-intriguing Si Spurrier, is a werewolf story crossed with a special-ops Afghanistan-war story, with lots of philosophy about inner savagery and the passionate monsters inside of us; with all the first-issue setup, Kelly only gets one big panel to bring the horror/monster stuff, but that indicates that later issues should be pretty cool.  Prophet: Earth War is Brandon Graham’s return to the long-time Image character that introduced his off-kilter, far-future sf style to a lot of readers a couple of years ago; his artistic collaborators Milonogiannis and Roy are back, too, so anyone who enjoyed their 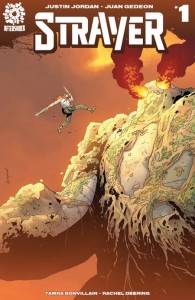 previous run on this comic should love this latest installment.  Strayer is post-apocalyptic sword and sorcery, with a female mage trying to persuade a reluctant barbarian to help her save the world; it’s distinguished by some good dialogue and by Juan Gedeon’s art, which knows when to be clear, when to be semi-impressionistic, and when to pull out the stops for a big looming-monster splash-page.  Finally, Hellboy Winter Special gives a number of creators a chance to tackle Mike Mignola’s long-running occult-adventure character: he doesn’t even appear in the first story, in 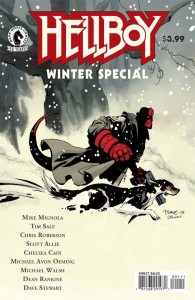 which Mignola and Scott Allie tap into some Mignola-Earth history to tell a tale of an encounter with old magic around a campfire, but since the artist is Tim Sale readers should appreciate it anyway. The second story, set in 1953, does have both Hellboy and the B.P.R.D., and is by Mignola and Chris Roberson, with art by Michael Walsh; it’s a typically-good Hellboy-and-team-vs.-restless-ghosts offering. The third story, set in 1975, has Hellboy and a very young Liz against demonic snowmen, with art by Michael Avon Oeming, and is the best of the batch; it’s followed by a two-pager involving Lobster Johnson and Japanese myth,  by Dean Rankine, that manages to combine humor and horror very effectively in its short space. 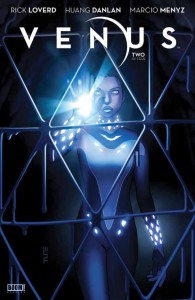 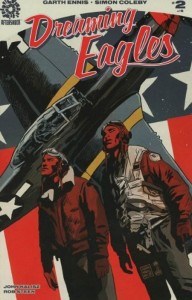 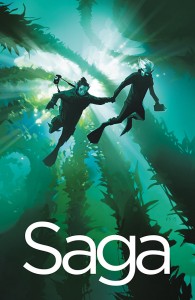 The other indy books, in a wide variety of styles and genres; what they have in common is their quality.  Venus is about a group of explorers from an earth on the verge of world war, attempting to colonize the title planet but facing all manner of obstacles; it takes a couple of cues from The Martian, but with yet another

of comics’ new problem-solving alpha females as its lead, and with enough unique twists to keep readers interested. Dreaming Eagles is the second installment of Garth Ennis’s wartime mini-series about the Tuskegee Airmen, and is just as well-researched and wise as all of his other war stories, with racism, nobility and the hard cold facts of war all mixing effectively. I don’t have to sell you on Saga, except to note that this chapter focuses on the two romantically-involved reporters, with only one 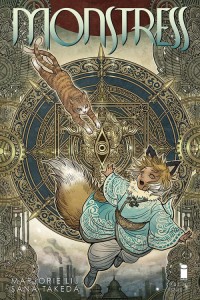 major character appearing at the end. Deadly Class offers another chapter in its kid-assassins’-school free-for-all (the graduation/slaughter arc here acting as a dark-mirrored reflection of actual high-school relationships), with a graceful, appreciative Remender message to readers in the back, along with a double-page splash of all of his Image comic characters by the French artist Bengal.  Monstress has increasingly-ethereal art by Sana Takeda, wrapped around a Lovecraftian plot with a feminist/matriarchal high- 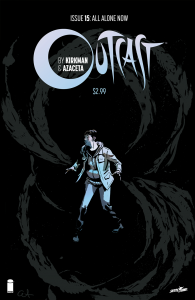 fantasy foundation — a combination that would have made HPL’s head explode, but which modern readers should appreciate.  Outcast, like Walking Dead, has developed into an effective monthly routine — it’s instructive to watch Kirkman and company supply a measured piece of the comic’s overarching story on time, every four weeks, and brick by brick build a compelling, and often surprising, world of flawed and fascinating characters. Island continues to be the best anthology out there; since the book’s editors, Graham and Rios, are artists 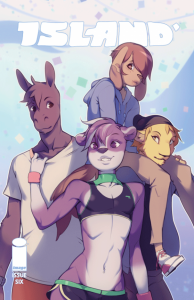 themselves, the visuals here are presented with care, larger than a normal comic and with beautiful coloring and production values; it gives the work by all these little-known artists that much more impact. The spotlight this issue is on Onta, whose 29-page anthropomorphic/furry world of young adults offers a clean style and an ernest, warm script that should be appreciated by anyone with fond memories of Critters, Omaha the Cat Dancer, Genus or, especially, Hepcats. There’s also a 29-page second chapter of A Land Called Tarot, by the French/American creator Gael Bertrand, another high-fantasy tale that’s sort-of like Wind in the 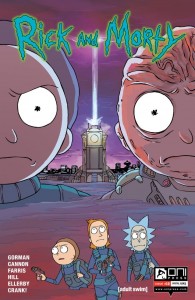 Willows crossed with Lord of the Rings; it’s told only in pictures, with no dialogue or sound, but clearly enough for readers of any language to understand. Mix in a four-page intro by F Choo, a pin-up by the great Katie Skelly, and two pages by the equally-great Sarah Horrocks, and it’s eight dollars well spent. That leaves Rick and Morty; despite never watching the cartoon, I’ve developed an inexplicable fondness for its casual cruelty and inter-dimensional adventures, with its irresponsible, drunken scientist and his sweet, noble and perpetually-traumatized grandson, and this issue’s a good example of its weird, knowing and occasionally-queasy charm.

With 40 years of experience in comic reading, collecting and reviewing, English Professor Phil Mateer has an encyclopedic mind for comics. Feel free to ask Phil about storylines, characters, artists or for that matter, any comic book trivia. He will post your questions and answers on the AABC blog. His knowledge is unparalleled! He is also our warehouse manager, so if you are looking for that hard to find comic book, ask Phil!
View all posts by Phil →
This entry was posted in New Comics, Reviews and tagged Art Ops, Avengers, Black Canary, Cry Havoc, Deadly Class, Deadpool, Dreaming Eagles, Extraordinary X-Men, Hellboy, Island, Jem and the Holograms, Last Gang in Town, Monstress, Moon Girl and Devil Dinosaur, Old Man Logan, Outcast, Prophet, Rick and Morty, Saga, Spider-Woman, Squirrel Girl, Strayer, Suicide Squad, Superman, Twilight Children, Venus. Bookmark the permalink.