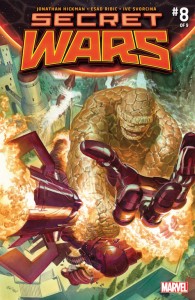 This series is now like the guest who stays at the party too long: they were entertaining a few hours ago, but now all you want to do is sweep up and lock the doors, and they’re still over at the karaoke machine….  You can’t accuse Hickman of thinking small, though, considering this issue has a cover-featured battle between a giant Thing and a Galactus controlled by Franklin Richards; there’s also a Thanos/Dr. Doom “fight,” a reunion of 3/4 of the Richards family, a bunch of zombies, an Annihilation horde, Star-Lord piloting a ship and chewing on a toothpick that turns out to be a major plot twist, and a last-panel arrival of two heroes, one wearing an Infinity Gauntlet. Fine, Secret Wars: stay another month, and let’s hope your ending is as much widescreen technicolor fun as the rest of you has been. 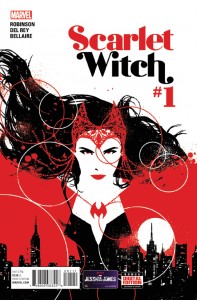 Only two Marvel debuts this month, and both are unexpectedly good. Wanda Maximoff hasn’t exactly had a smooth time of it the last decade or two, with a lot of different writers pulling her in different directions; with Scarlet Witch #1, Robinson takes her back to basics, as a powerful sorceress who, aided by the shade of Agatha Harkness, is trying to protect witchcraft from a mysterious looming threat. The New York City setting and focus on her as a solo character works well, and the dark, detailed and beautiful art by Vanesa Del Ray seals the deal and makes this worth buying.  Gwenpool Special sounds like a dumb concept, and I opened it reluctantly and with no expectations; imagine my surprise when it turned out to be a continuation of Soule’s highly-regarded She-Hulk book, with Jennifer’s 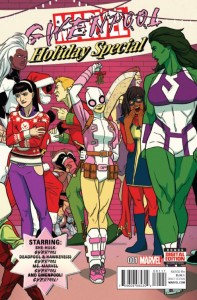 throwing a superhero Christmas party to rally support for her landlord the frame for solo spots involving Ms. Marvel (by Margaret Stohl and Juan Gegeon), Deadpool and the two Hawkeyes (by Gerry Duggan and Danilo S. Beyruth), and, yes, the Gwen Stacy/Deadpool mashup (by Christopher Hastings and Gurihiru). Marvel’s PR people must have decided to cover-feature Gwenpool as the hot character to lure a few buyers, but this is the rare bait-and-switch where the switch turns out to be considerably better than the bait: the Soule She-Hulk was a smart, charming romp, and it’s good to check in on those characters again — especially since Foss has a sleek, modern, cartoony style that fans of Javier Pulido’s art on the previous volume should appreciate. 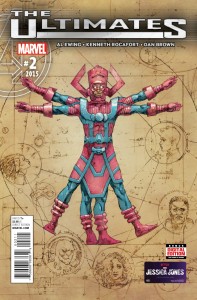 The week’s other Marvels of note: Ultimates is positioning itself as a pyrotechnic Big Idea book, with highly-intelligent characters like the Blue Marvel and Black Panther 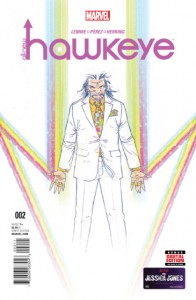 combining with cosmic/space ones like Captain Marvel and Spectrum to tackle projects like, oh, reversing Galactus’s polarity. Ewing shows an easy familiarity with the characters, and a Warren Ellis-like knack for dealing with weird technology and far-out concepts, while Rocafort has a half-painterly style overlaid with strong design elements that reminds me of Leonil Francis Yu. This is an Avengers book for people who don’t necessarily like the standard Avengers comics, and, encouragingly, so far it’s pretty good.  Hawkeye continues Lemire and Perez’s previous take on both Clint and Kate, with Lemire playing around with time (we get the characters having a huge argument and splitting up in the present day, intercut with their reunion against the 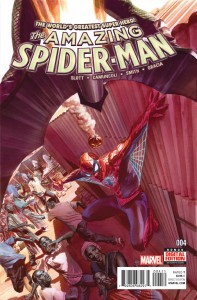 Mandarin (and S.H.I.E.L.D.) thirty years in the future), Perez continuing to be impressive at adapting different styles to the different time periods of the story, and Lemire delineating character sharply and affectionately; he’s got as good a handle on the fractious Clint/Kate relationship as previous scripter Matt Fraction did, which should keep fans of this book satisfied. Amazing Spider-Man, meanwhile, just continues on its merry way, with Slott and Camuncoli now having worked on the title since the “I have Doc Ock’s brain” period. Slott’s earned readers’ faith that he can make any concept work, and he keeps making Peter Parker and his supporting cast interesting and entertaining, without just rehashing old storylines: not a bad stewardship for a character who’s now been around more than fifty years. 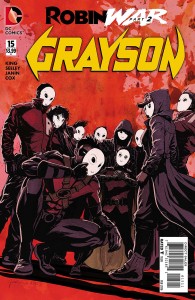 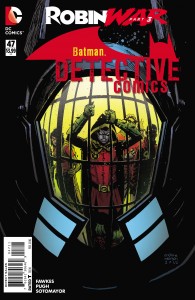 These are all part of DC’s Robin Wars bat-crossover; Grayson and Detective represent the next two actual chapters in the story that began last week with Robin Wars #1, while Gotham Academy and Red Hood/Arsenal 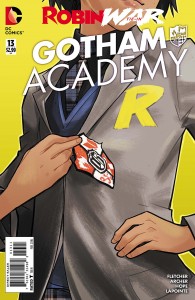 supplement the main story by showing what their Robin-centric characters are doing before and around the main action. The plot’s got the We Are Robin crew of dozens of young sidekick-inspired Gotham street kids/vigilantes screwing up, leading to a policeman’s death and to Gotham City instituting a “No Robin” policy, allowing the arrest of anyone wearing the character’s colors or identifying with him; this leads Dick Grayson, Jason 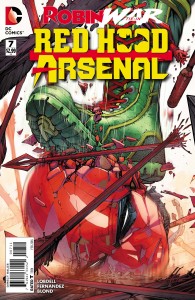 Todd, Red Robin and Damian Wayne to show up and try to train/advise/discourage the wanna-bes, with Grayson taking the lead role in his book, and teaming up with the James Gordon Batman in Detective. Gotham Academy counts because there are a a couple of Robin-inspired kids, plus Damian, there (plus, it’s a cool all-ages boarding-school-adventure book by the co-writer of Batgirl, and it’s underappreciated, so anything that will get people to sample it is fine with me), while Red Hood /Arsenal is involved because, duh, Red Hood (it’s also the book least connected to the main event, and the easiest one to skip if you’re on a comics budget this week). 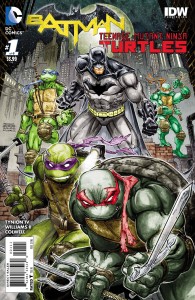 Two more Bat-books: Batman/TMNT seems about twenty years too late, and six issues seems about five too many, but I suppose DC and IDW figure it’ll sell well as a trade. Both properties involve gritty urban settings, too, and it’s not 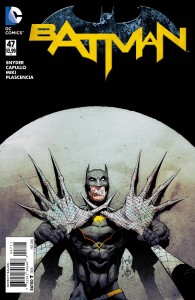 like Batman has never fought ninjas, so a dimensional accident here, and a sewer encounter with Killer Croc there, and the plot’s in business, with the inevitable misunderstandings and a last-page introduction/confrontation to kick off next issue. Batman itself continues its “Mr. Bloom” story, with Jim Gordon still in the bat-suit; if that seems silly, consider that Snyder and Capullo have kept this the best-selling ongoing superhero title for the last four years.  Rumors this week said that they might be leaving the title sometime next year, though, so appreciate them while they’re here — and wonder what a last-page encounter on a park bench might mean for next issue. 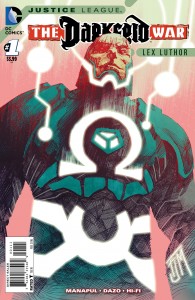 This is the last of the stand-alone “Darkseid War” one-shots — and, as a look at the cover will show, it sets up a big change for Lex. Read it so, in the 2030s, when someone says “Remember that time Lex Luthor became Darkseid?” you can participate in the conversation — and wait for the regular Justice League title in another week or so, to see what happens next. 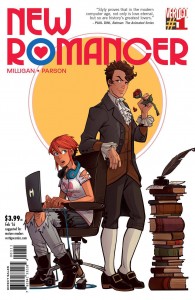 A couple of Vertigo offerings: New Romancers has a hook involving a dating site and a computer A.I. programmed with the personalities of some historic famous lovers, like Byron, Don Juan and Casanova, plus a couple of 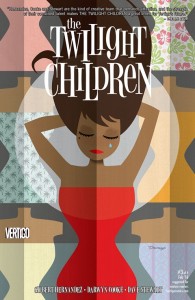 convenient blank-slate dead bodies, all as a way of transporting the romantic crew to the present day. Will culture clashes, hijinx and, probably, murder ensue? Considering it’s a typical Peter Milligan Vertigo book, probably so. Twilight Children continues its dream-team creative lineup of Hernandez and Cooke (with Stewart’s colors matching their high level) and their sexy, surreal tale of a Mexican village, glowing spheres, federal agents, blind children, love and betrayal: it should make a decent, long-selling trade book, but you can read the first 75% of it right now, as long as you don’t mind waiting a month for the final installment…. 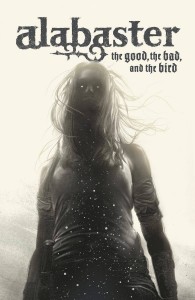 The more interesting indy debuts for the week: Insexts is the most accomplished, an eerie Victorian tale involving an upper-class woman, her loveless marriage, her sexy maid and some very creepy entomological-mystical stuff; what might have seemed exploitive in the hands of male creators instead becomes a dreamlike horror story and a meditation 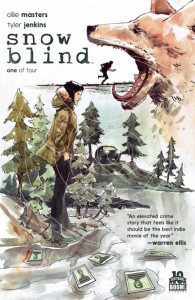 on female reproductive power from Bennett, with Kristantina’s art toggling easily from the beautiful to the eerie to the bloodily shocking. Alabaster begins another volume in the chronicles of its title character, a monster-hunter in a modern-but-folk-talish American South who gets her orders from an angel, but doesn’t always follow them. She died in the last installment of the series, but that doesn’t seem to have stopped her; she’s in hell, or limbo, as this comic opens, while events in the real world conspire to bring her back. This is another book with a nice combination of the surreal and the horrific, with its stubbornly-independent, scripture-obsessed heroine holding it all together. 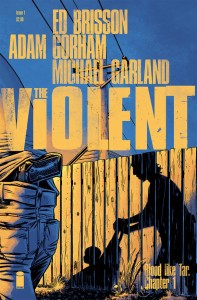 Snow Blind is about a rebellious, bookish teenager in Alaska who finds out his parents are in a witness protection program; the quirky characters and watercolorish art make it stand out. The Violent is yet another noir book, about a couple of ex-addicts trying to make a sober life with their young daughter, but finding individually that poverty and boredom keep pulling them back in; it’s well-told and well-drawn, but none of the characters are particularly likable, and bad things squash them down depressingly often, so if that kind of thing bothers you stay away — or hope that things get better later, although the series’s title might not hold out much hope…. 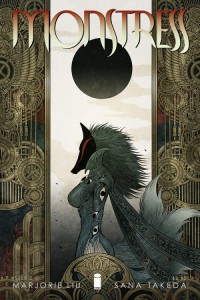 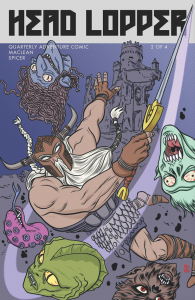 A couple of sophomore issues and a conclusion: Monstress is good, but don’t read it until you’ve picked up its more-than-double-size first issue, which establishes Takeda’s lush manga-American art, the high-fantasy, barbarian, magic-enabled setting, and its revenge-driven, dark-destiny-touched 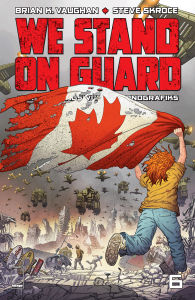 heroine. Head Lopper knows the advantage of a satisfying chunk of story, too: as a quarterly, it offers 45 pages of McClean’s art, which looks like the love child of Mike Mignola and Moebius and is anchored by Spicer’s bright colors; it’s Conan done by Genndy Tartakovsky. Where those books are beginning, We Stand on Guard is ending,  its tale of a future war between the US and Canada concluding with victory won by heroic sacrifice. Vaughan gives both sides a fair hearing, but while his sympathies are with the Canucks it’s the inevitable collateral damage of war that’s his real topic. 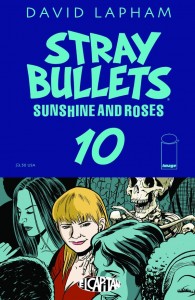 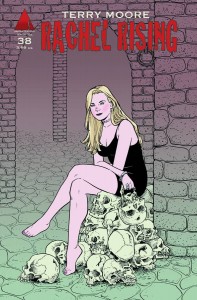 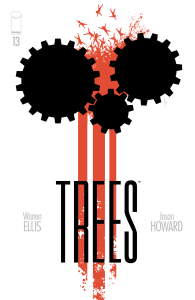 over two decades of hard-edged, hard-scrabble crime drama and for its current storyline, which brings together a number of the comic’s sprawling cast and sets them up for a presumably-bloody resolution in another couple of issues; Rachel Rising for its occult-thriller fizz and the way it gets in at least one or two scenes of casually-horrific violence in every issue; and Trees for its high-concept sf hook, the way Howard draws the gentle human moments and the guided-missile-explosive ones with equal grace, and the sense that Ellis, thirteen issues in, is just now starting to round the corner of his narrative and tie his world-spanning plot threads together.

With 40 years of experience in comic reading, collecting and reviewing, English Professor Phil Mateer has an encyclopedic mind for comics. Feel free to ask Phil about storylines, characters, artists or for that matter, any comic book trivia. He will post your questions and answers on the AABC blog. His knowledge is unparalleled! He is also our warehouse manager, so if you are looking for that hard to find comic book, ask Phil!
View all posts by Phil →
This entry was posted in New Comics, Reviews and tagged Alabaster, Amazing Spider-man, Batman, Gotham Academy, Grayson, Gwenpool, Hawkeye, Head Lopper, Insexts, Monstress, New Romancer, Rachel Rising, Robin, Scarlet Witch, Secret Wars, Snow Blind, Stray Bullets, The Violent, Trees, Twilight Children, Ultimates, We Stand on Guard. Bookmark the permalink.