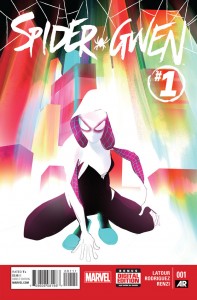 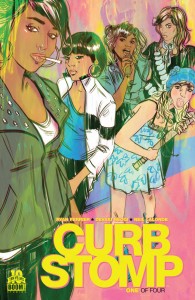 After a bit of an early-year lull, we’re starting to get a lot of debut issues again (and just wait a few months, when both Secret Wars and Convergence give the Big Two companies a chance to reset their various offerings…). The buzz leader this week is Spider-Gwen, based on the “Spider-Verse” series that’s been winding its way through the various arachna-titles over the last few months, and just concluded.  She’s from an alternate earth where it was Gwen Stacy, not Peter Parker, who got bit by that pesky radioactive spider, and Peter who ended up dead, and her “S-V” appearance generated so much heat that 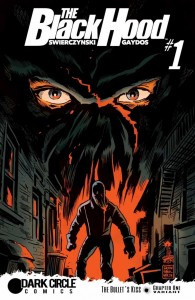 Marvel decided to give her a series. Like a lot of new books right now, it’s aimed squarely at the female-reader market, with a style that’s cartoonier, and a little more manga-ish, than most, and a light, jokey tone combined with the usual superhero drama (which, come to think of it, has always been a mark of the Spider-books). The alternate-earth thing makes it a lot like an Elseworlds (or, being Marvel, a What-If?) book, with familiar supporting characters in unfamiliar roles; Latour has it all cleverly worked out, and part of the fun is catching all the small Easter eggs and other references. That combination of humor, fan service, and modern style should bring back a lot of the curious first-time readers for later issues, and make it at least a modest hit. Curb Stomp is another f 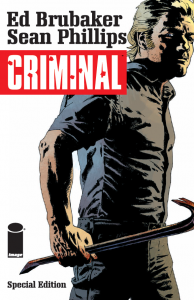 emale-centric book, but the opposite in tone from Spider-Gwen; it’s got a look more Paul Pope than manga, with an urban-gang story revolving around five girls, hard-drinking and tough as nails, who defend their turf against an encroaching set of males. Like its protagonists, it’s a little rough around the edges, but full of energy, and with its heart in the right place — and there’s that nice-looking cover by the amazing Tula Lotay, too… (as always, click on the thumbnails here to see larger versions of the art). Next up is The Black Hood, an attempt to reinvent that old character by Dark Circle Comics, a new superhero imprint from Archie Publications. This first issue is mostly about getting that title mask into the right hands, of a scarred, painkiller-addicted cop, and it’s a decent-enough slice of gritty urban drama; 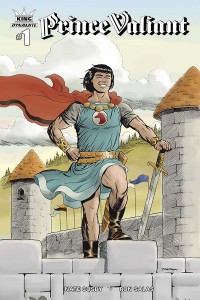 Gaydos has an appropriately dark, noirish style (a lot like, say, Alex Maleev), and delivers an encouraging first issue (as with a lot of new books today, there are a number of alternate covers, but I liked the Francavilla one pictured the best). If you’re looking for expert noir, though, go to the team of Ed Brubaker and Sean Phillips; they’ve been producing great books in that genre for over a decade. Here, they return to one of their earlier series, Criminal, with a plus-size one-shot featuring one of that title’s main characters, Teeg Lawless, doing short time in a county lockup in 1976 and facing a contract on his head. The conceit here is that, in jail, he’s reading a copy of a comics magazine — Savage Sword of Conan, although it’s called something different here, for obvious reasons — and we intercut that book’s contents with the “real” story. It’s all clever, 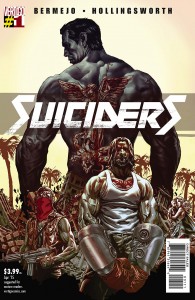 good-looking and very well done, and serves as a perfect introduction to the Criminal world — which, not by coincidence, is now being offered in a new edition of six trades from Image Comics. An even-older franchise, Prince Valiant, is also offering a new series this week; as with, say, Little Nemo in Slumberland, it’s hard for new creators to produce anything approaching this title’s golden-age heights; Ron Salas has the unenviable task of following Hal Foster, and, after some just-OK initial pages, does let loose on a series of splashes at the end that at least echo some of the pleasures of the original comic strip. However, why readers wouldn’t take the $3.99 required for this, and put it toward buying one of the book versions of the actual Foster stuff, is left unclear.   Helping to round out the list is 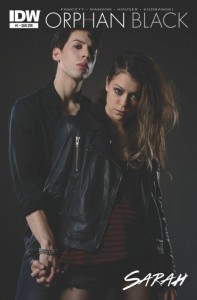 Suiciders, a new Vertigo book about a post-big-earthquake LA that’s been divided into a rich-people enclave of beautiful people with cyber-enhanced bodies and a walled-off set of poor immigrants and other desperate members of the lower class; the Bermejo story and art make it reasonably pretty (in its grim, urban-gladiator way), but not particularly memorable. That leaves Orphan Black, a comic-book version of that cult TV series involving a woman with multiple clones and lots of problems; those who have never seen the show will be left totally confused, but fans will probably like it — and should look for the book’s alternate sub cover, since it features a photo of the show’s main character. 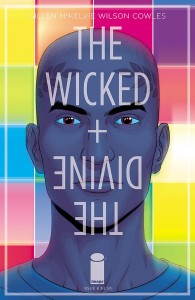 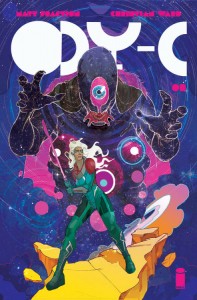 These are the best of the Image books this week — The Wicked and the Divine, in fact, continues to be one of the best books on the stands, with its tale of gods reincarnated in the bodies of young adults who then have two years of the attendant fame and powers before dying. This issue focuses on Dionysus, so it’s about a party, and nobody does music/raveup parties like Gillen and McKelvie, as fans of their earlier Phonogram series know; this one sparkles with experimental colors and layouts, and 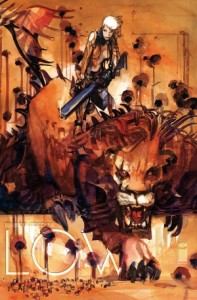 moves the story along nicely too, providing a good sample of the comic’s many charms for new readers.  ODY-C, writer Matt Fraction’s distaff/sf version of Homer, involves the Cyclops this issue (as a glance at the cover will confirm), and it, too, is a brightly-colored, imaginatively-designed and very well thought-out story, well worth a reader’s time. Finally, Low, Rick Remender’s  comic about the sun growing slowly bigger, forcing mankind to retreat to the ocean depths, ends its first arc (six issues equaling one trade) with both a victory and a death, appropriate to its themes of optimism in the face of despair; like the other books here, it has detailed, well-designed art combined with deep, glowing colors, and any reader leafing through it should find it hard to resist. 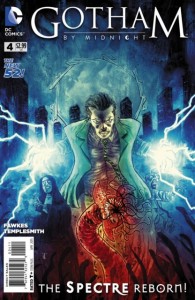 Two DCs worthy of note, both set in Gotham City. GBM is an occult thriller that benefits enormously from Ben Templesmith’s eerie, exaggerated, intensely personal art, but it’s also good because writer Fawkes knows exactly how to play to his strengths: after a few issues of set-up and battles 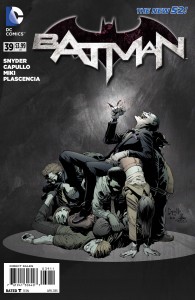 with various demonic forces, the lead detective in the police department’s supernatural-investigation team, Jim Corrigan, lets his inner avenging angel, The Spectre, out, to apocalyptic effect. Meanwhile, in Batman, Gotham’s facing a different sort of full-scale meltdown, this one caused by The Joker, as Batman, his allies, and his rogue’s gallery all team up to try to save their city. Like Gotham By Midnight, this offers the penultimate chapter of a story, but with more than enough drama and high stakes to bring readers back for the conclusion next month. 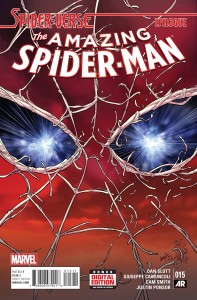 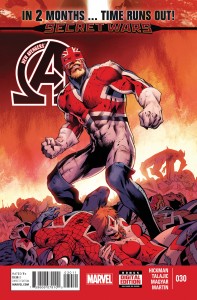 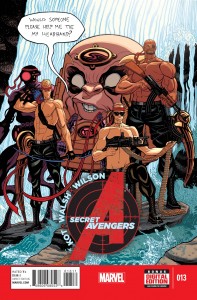 to the last few months’ “Spider-Verse” story we mentioned at the beginning, as loose ends get tied up and the myriad plot points and characters get put back into their rightful places. New Avengers just keeps ramping up the stakes in its multiverse-spanning story, with Hank Pym returning from a dimension-spanning scouting mission to report back about the deaths of, oh, pretty much every Celestial, aleph, nihilii, mapmaker and every other cosmic power across the various dimensions, all at the hands of the Ivory Kings, who turn out to be… well, read it and see, but you can’t accuse writer Hickman of thinking small — 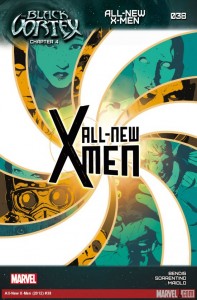 and as a run-up to this spring’s Secret Wars event it’s setting the bar very high. Meanwhile, Secret Avengers has its own modest apocalypse going on, but in a much lower (and, often, funnier) key, as characters as diverse as M.O.D.O.K., Agent Coulson, Nick Fury, The Fury, Hawkeye, Spider-Woman and the Black Widow all battle to save the planet (the book’s cover here gives a good idea of its tongue-in-cheek appeal), and the very clean and modern-looking art, layout and coloring should, damn it, be making it a better seller than it is right now; this story, with two issues to go, will be its last.  All-New X-Men skips an issue — the last one was #36, and this is #38

— because they need to fit in this chapter of their crossover “Black Vortex” saga now, or it’ll screw up the other books involved; for all you completists, don’t worry — the 37th issue will arrive, out of order, in a few weeks. This issue itself is OK, although this crossover’s “absolute power corrupts” theme is very close to the recent “Avengers Vs. X-Men” and its Phoenix-power plot — as all the X-Men keep reminding us in the story itself. Daredevil continues to give Waid and Samnee an opportunity to show everyone else how to produce a thoughtful, action-filled, and good-looking superhero comic (when we look back in a few 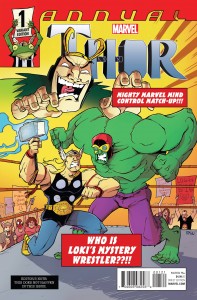 years, their influence on a lot of other newer books right now, from Hawkeye to Batgirl, will be clear, something like Mike Parobeck’s in the ’90s), while the Thor Annual manages the increasingly-rare feat of making a comic’s annual issue an actual event: there are three stories, one of the “old” King Thor of the far future, one of the current female version, and one of the “young” Thor from Viking days; Truman and Sauvage are inspired choices for artists — neither gets the appreciation their work deserves — while Rob Guillory, of Chew fame, is probably the artist you’d least predict to appear in a Thor comic, and turns in a slapstick romp involving Mephisto, Loki, and lots and lots of drinking (check out his alternate-cover art here for a sample of his odd-but-weirdly-appropriate style); at $4.99, this book may be the best comics value of the week.

With 40 years of experience in comic reading, collecting and reviewing, English Professor Phil Mateer has an encyclopedic mind for comics. Feel free to ask Phil about storylines, characters, artists or for that matter, any comic book trivia. He will post your questions and answers on the AABC blog. His knowledge is unparalleled! He is also our warehouse manager, so if you are looking for that hard to find comic book, ask Phil!
View all posts by Phil →
This entry was posted in New Comics, Reviews and tagged All-new X-men, Avengers, Batman, Black Hood, Criminal, Curb Stomp, Daredevil, Gotham By Midnight, Low, Ody-C, Orphan Black, Prince Valiant, Secret Avengers, Spider-Gwen, Spider-man, Suiciders, The Wicked and the Divine, Thor. Bookmark the permalink.