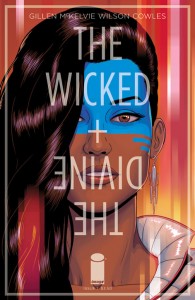 This is a sharp-looking book — you could cut yourself on McKelvie’s precise, thin lines — and the theme’s about death and art, so it can be grim and gory (particularly so in one scene in this issue), but there’s also a warmth in both the words and the pictures, and a passionate humanity at its core that makes everything work. This issue concludes the first arc, and the last scene (which I assume will also be the end of the first trade) is quiet, startling and a perfect way to bring readers back for the next volume. Special mention to colorist Wilson, who provides stellar work throughout, and has a lot to do with the impact of  those last few pages. 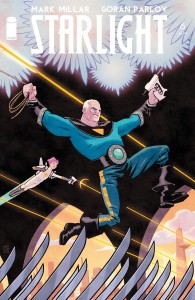 Parlov’s another artist with a crisp, clear, modern line, and Millar gives him a lot of ways to show it off here, with his square-jawed, confident hero and Flash Gordon-inspired alien landscapes. Millar often gets called out for over-cynicism, but he’s a romantic at heart, and this story indulges that side of him; it goes just where you think it will, but is very sure-footed about it, hitting all the right emotional notes, sticking the landing and leaving its hero right where we want him to be: it’s a crowd-pleaser, and the art, which in lesser hands might have exposed some of the story’s weaknesses, instead enhances and strengthens it, letting it, like its hero, arrive home with flash and style. 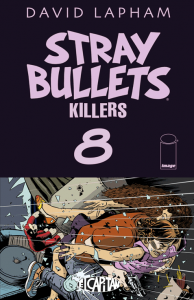 This is the noir-iest comic on the stands; it makes Brubaker and Phillips’ Fatale look like My Little Pony.  You’ve got your murderous bad guys with guns, your desperate teens, your love triangles, and lots and lots of (a) sex and (b) blood; each episode is also a very carefully constructed stand-alone story that knows just where to stop (so new readers can jump on with almost any individual book), and at the same time is only one jigsaw piece of a much bigger meta-story. If you’ve never read Stray Bullets, check it out: it was good twenty years ago, it’s good now, and twenty years from now Lapham will probably still be producing it, just as gritty and just as great as ever. 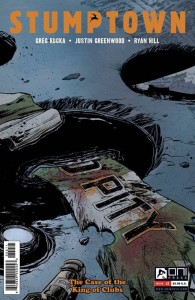 This is another comic that strays into noir territory, although it’s mostly a private-detective thriller, with an appealingly-realistic female lead and a Portland setting that’s sharply-realized (the plot involves the Seattle/Portland Major League Soccer rivalry, obsessive fans, and a friend of the main character who gets jumped and beaten badly after a game, by unknown assailants). Greenwood’s art’s a little basic for me, but it’s always clear, and I like his knack for crafting easily-distinguished characters in just a few lines.  Rucka’s corporate-superhero work has both fans and detractors, but he’s always been excellent at police-procedural stuff, so he’s on sure ground here;  the result is a well-crafted page-turner that deserves a wide audience. 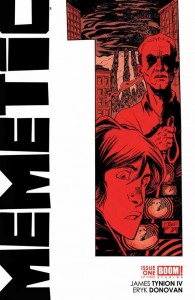 This is a zombie-apocalypse variation, much like the beginning of Stephen King’s Cell, where a weirdly-hypnotic image of a smiling sloth goes viral on the Internet (it’s the “meme” in the title), but turns out to cause… very bad effects on people who view it. Tynion, who’s also writing The Woods right now, is good at taking this kind of B-movie premise and running with it; Donovan’s art is better at the people scenes than the action ones (his style is a little too cartoony to be effective at horror), but he really nails that creepy sloth picture: it is hypnotic. This works well as a first issue, although whether it can sustain the momentum (early-apocalypse scenes, where “normal” changes into chaos, are almost always more interesting than the post-apocalypse, what-do-we-do-now? ones) remains to be seen. 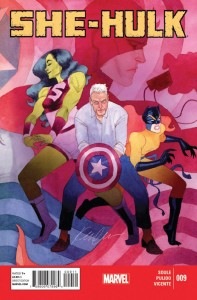 Captain America’s being sued for causing a young criminal’s death in 1940, and Jennifer is defending him against the plaintiff’s lawyer, Matt Murdock, in a battle of the legal super-heroes. This is another one of those clean-lined, brightly-colored, sharply-written, modern-looking books whose style is defining the 2010s era of comics right now, and it offers an attractive package: Soule makes the legal stuff interesting, uses Steve Rogers’ straight-laced Boy Scoutish personality to good effect (I’d like to see him do a similar turn with Superman), and combines comedy and drama well; Pulido has a deceptively-basic style that’s actually very well composed and thought-out, and it’s a good fit for this book. Word this week was that Marvel’s cancelling this title with issue #12. Too bad — but that doesn’t mean we can’t enjoy these last few stories, and can look forward to the two cool trades we’ll get out of it…. 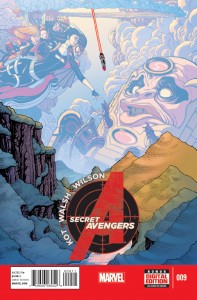 This is another “new”-looking book; Kot has a real skill for combining in-jokes, personality quirks and, then, actual drama to catch the reader by surprise; he’s also got a sneaky wit, as evidenced by a sequence with M.O.D.O.K. that, of all things, echoes the first page of Morrison and Quitely’s All-Star Superman.  Meanwhile, Walsh has yet another of those sharply-styled lines: of all the artists here, he’s one of the best at good-looking full-page splashes, and Kot gives him a lot of them. This is also, sadly, another book that’s treading close to cancellation territory, so pick it up before you can’t, and see if its quirky humor and open, flowing style make you smile too. 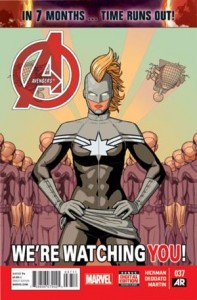 Remember when this and New Avengers started, and all the Hickman fans said “Just wait; it may look scattered and hard to understand now, but eventually it’ll all come together”? Well, here you go: we now have the two books working hand in hand, and the Illuminati are fugitives being chased by everyone else, including a pissed-off Steve Rogers, Director of SHIELD, and it’s a big ol’ roller coaster zipping along to some big “Time Runs Out” mega-conclusion in another seven months, and even if you haven’t been reading it all along and have no idea what an “incursion” is, it’s an exciting, twisty ride. Points off, though, for a cover that has absolutely, positively nothing to do with anything inside the actual comic. 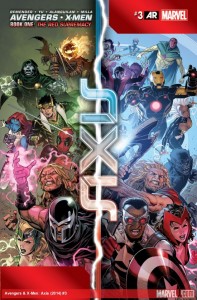 This nine-issue series seems to be split into three arcs, since the first one ends here, with the apparent defeat of the Red Skull — but, you know, six issues to go, so things can’t be what they seem. The X-Men and the Avengers work togethr to defeat him, although the real heroes turn out to be the ragtag band of bad guys Magneto pulls together, including Carnage, Sabretooth and the Absorbing Man, with Deadpool and Loki as not-quite-bad colleagues and Dr. Doom contemptuous of everyone else and looking out for the main chance. If you like your event comics widescreen, with over two dozen characters all bouncing off one another and action all over the place, here you go: Yu does a good job of keeping it all clear and distinguishable, and Remender juggles all the possible plots and subplots with aplomb, so it’s definitely a lot better than some of these things have been in the past. 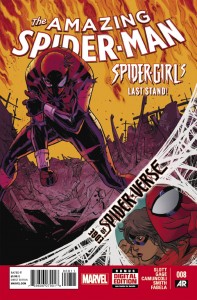 The main story’s the conclusion of a two-part team-up between Spidey and the new Ms. Marvel, and has a couple of nice moments, but the cover mostly features the six-page backup story, by Slott and Humberto Ramos, which hooks up the alternate-universe May Parker Spider-Girl character to the rest of the “Edge of Spider-verse” crew. Fans of that character’s long-running series will be glad to see her, although probably not of the scorched-earth nature of the plot (just remember, if there are infinite alternate universes, then there’s a May Parker one where those events didn’t happen…). 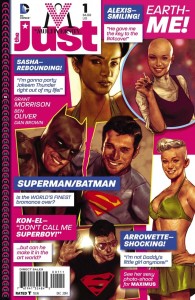 This one-shot is set on a DC earth that’s sort of like Kingdom Come: 2nd- and 3rd-generation heroes like the daughter of the Connor Hawke Green Arrow, a Damian Batman who’s dating the daughter of Lex Luthor, a son of Superman, etc. Supes senior, by the way, is gone, but left behind a bunch of Superman robots who keep the piece and are kinda sorta totalitarian, and Bloodwynd’s in the mix somehow, and there are a bunch of comic books leaking through from other dimensions, and causing a rash of suicides, and somehow it all ties together and ends in something of a cliffhanger. How does this tie into Multiversity itself? Who knows, but Morrison was crafting these dense multiple-part continuity-rich sagas decades before, say, Hickman, and is still very good at it, offering tons of characterization, plot and sly meta-commentary for your $4.99. 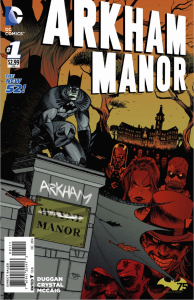 The original Arkham Asylum having blown up/imploded/whatever, Gotham City needs a place to house its criminally-insane costumed villains, and ends up somehow, blah blah eminent domain blah negotiations, taking over a deserted Wayne Manor. Bruce Wayne, figuring that it’s at least a secure place to keep his adversaries, plugs up the Batcave/mansion tunnel with a couple tons of concrete, and… well, there you go: that’s the premise. I don’t know enough about this creative team to know if they’ll take it anywhere interesting, but am willing to stick around a few issues to see. 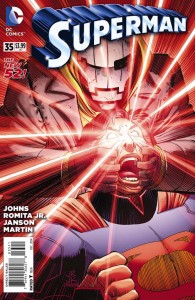 Still a really-smoothly-done story: Johns is good at inverting readers’ expectations from one issue’s conclusion to the next’s beginning (Only Robert Kirkman, over in The Walking Dead, has been as good at swerving his stories off in unanticipated directions), and watching Romita Jr. pencil the Superman family is still weirdly fun (you keep expecting to see Peter Parker sitting in a corner of the Daily Planet newsroom). Stir in an interesting new villain and a new supporting-cast member who allows for commentary on the moral imperatives of the super-powerful, and you have a decently-done, effective run on this title right now.

With 40 years of experience in comic reading, collecting and reviewing, English Professor Phil Mateer has an encyclopedic mind for comics. Feel free to ask Phil about storylines, characters, artists or for that matter, any comic book trivia. He will post your questions and answers on the AABC blog. His knowledge is unparalleled! He is also our warehouse manager, so if you are looking for that hard to find comic book, ask Phil!
View all posts by Phil →
This entry was posted in New Comics, Reviews and tagged Arkham Manor, Avengers, Axis, Memetic, Secret Avengers, She-Hulk, Spider-man, Starlight, Stray Bullets: Killers, Stumptown, Superman, The Just, The Wicked and the Divine. Bookmark the permalink.