Miraculously, we have a week without dozens of new titles, or sparkly 3D covers, or other major debuts or milestones (yeah, Wolverine “dies,” but c’mon…). That’s good, because it gives us a chance to spotlight some of the better ongoing titles, the ones that sometimes get lost in the pr hype of the new stuff: 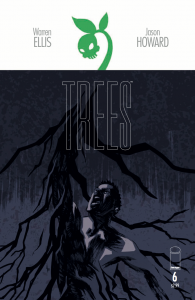 Case in point: Ellis is doing some of the best work of his career with these two books. Trees is creator-owned, and continues its hard-sf concept of a world where, ten years ago, huge alien towers plopped down around the globe and have stood ever since, implacable, immovable and impervious to harm. So far, the comic hasn’t been about the “trees,” but about the humans around them, and their different reactions: in China, a sort of Hong Kong artists’ colony has grown up in their shadow, since the authorities leave the area alone; on the other hand, in Italy the area around its “tree” is more anarchic, with small-time hoods ruling where the Mafia and the authorities are afraid to tread. All of 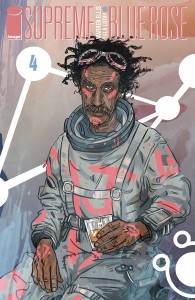 this gives Ellis a chance to focus on humans and their reactions to change, with some particularly pointed commentary on courage, sexual identity and the ability to chart one’s own destiny; Howard has a precise, warm way with faces and gestures (one that’s very reminiscent of the work of the Brazilian brothers Fabio Moon and Gabriel Ba), and it’s a perfect match. So too with Supreme: Blue Rose, where Lotay’s ethereal use of colors and backgrounds synchs up with Ellis’s meta-story about a world that keeps “rebooting” (in exactly the way that its title character has been imagined and re-imagined by different writers over the years), but has now become stuck, threatening to tear apart spacetime and the universe unless it can get fixed. Half-remembered future and past incarnations of characters drift in and out, and Lotay’s effective character design and knack with faces, like Howard’s, helps to ground everything and make this a beautiful-looking, intellectually-challenging story that’s only just getting up to speed. 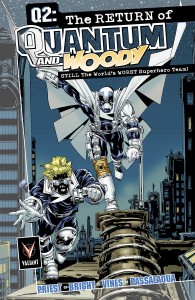 The original Quantum and Woody was a late-’90s book from Acclaim that used an experimental, short-chapter storytelling style to spin its tale about two brothers, one white and one black, one conservative and one liberal (but not the ones you’d think) who end up with super-powers after an accident, the kind that require them to stay in close contact or they’ll die — but, although they love one another, they really can’t stand one another, either. It was witty, sometimes poignant, always fun and very human (Priest has said that he modeled the two main characters after himself and artist MD Bright, and the bickering-laced-with-love relationship definitely felt nuanced and real… except for, you know, the super powers). The new Valiant’s attempt last year to revive the title caught the humor, but not the humanity, and fell short — but then, no one but the original team really had any business continuing it; it was like Howard The Duck when it wasn’t by Steve Gerber and Gene Colan. Now Priest and Bright are back, in this mini-series that ignores the recent title and instead takes up the adventures of the original crew — except that, in the book as in real life, it’s sixteen years later and a lot has changed. As a big fan of the first series, I found this a nice early Christmas present: still witty, still human and still a lot of fun. 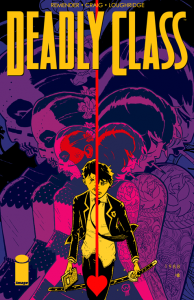 Remender and Craig’s comic about a school for teen assassins continues apace, with the origin of Marcus, the main character, that explains what he did in the past to end up a fugitive, and become suitable recruitment bait for the school; it involves his nemesis Chester (whom we’ve already met), a sadistic orphanage, and retribution, and makes him both a better and a worse person than we might have suspected. As always, the words and the pictures collaborate effectively to communicate both the horrific goings-on and the gentler, more-hopeful moments; this continues to be one of the better new comics of the year. 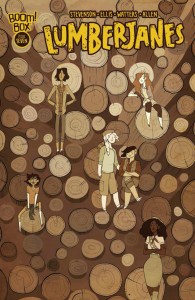 This one, too, although the cartoony art and Girl Scout(ish) summer-camp story make it more of an acquired taste. Look closely, though, and it’s got sharply-drawn characters and a skillfully-told, all-ages adventure that’s been building since the first issue, and reaches something of a climax with this installment; it’s about as far from Deadly Class as you can get in tone, but they share one quality: they’re both by creators who know how to tell a good story. 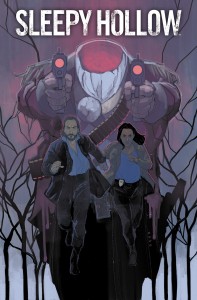 In the ’60s, it seemed like every popular TV show or movie had a comic attached to it, and then the industry kind of stopped those pop-culture connections; between Buffy The Vampire Slayer, X-Files, Sons of Anarchy and others, it’s nice to see that modern comics have renewed that link. Here, Bennett, who’s currently writing Earth 2: World’s End and Angela: Asgard’s Assassin, does a good job getting the rhythms of the TV scripts and characters down right, and Coelho (who’s been doing a bang-up job on Marvel’s Loki) is a much better artist than these tie-ins sometimes get. Bonus: there’s a two-page story from Lumberjane’s Noelle Stevenson that’s, oddly, perfect. 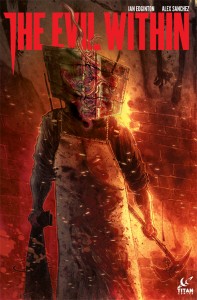 Edginton offers a Hallowe’en book that’s a mashup of horror-movie tropes: there’s the girl stranded in the backwoods near an abandoned diner, the weird Clive Barker Hellraiser-ish menaces, the Texas Chainsaw Massacre-like Boxman (complete with bloody leather apron), the spooky maybe-deserted asylum, etc., all woven together as part of a surreal dreamscape ala Nightmare on Elm Street. Sanchez is pretty good at nailing the different shocks and styles, with an effective splash or two (especially the money-shot reveal of the main bad guy), although it might have been interesting to see what an even more impressionistic artist like Ben Templesmith (who provided the cover) could do with these ideas too. In any event, this is much better than the kind of dashed-off, exploitive horror book that companies like, say, Avatar publish to milk fans of this genre. 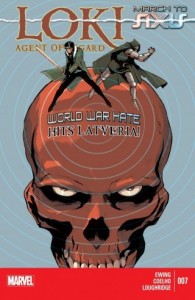 Kieron Gillen was the writer who first modernized and sympathized this late-teen version of Marvel’s trickster god, and Ewing has turned out to be a worthy successor: he’s kept Loki’s barely-a-hero motivations from Young Avengers intact, and the introduction of Old Loki, which seemed at first like a mistake, has turned out to be just the opposite: cackling with his craggy John Buscemaesque evil face, Old Loki both frames and challenges the younger version, and makes him more sympathetic. Artist Coelho has to make Loki, his companion Verity Willis, Dr. Doom and Valeria Richards all interesting, striking and relatable, and he manages nicely. Like Journey Into Mystery before it, this is a criminally-undernoticed book that’s doing some fine work right now. 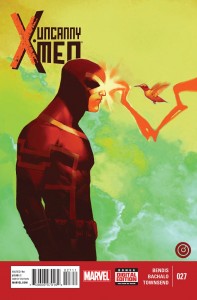 Any Bendis X-book with Chris Bachalo art (hell, any book with Bachalo art) is just fine with me, and his run on this title — although it’s been sporadic, with frequent substitute artists — has been quietly wonderful; he’s in his prime right now, and his ability to show emotion through facial features and expressions, and to compose an arresting image, is hard to beat. The tag-team inking doesn’t help, but the main guy, Tim Townsend, is a good match for him (look at that cover), and the story, a middle-to-late chapter in an arc about an omega-level mutant that the late Professor X had been controlling for many years, is actually pretty fun if you squint and don’t think too much about the retcon parts. With some effective teamwork from both Bendis and Bachalo, this been one of the better Marvel books for a couple of years now. 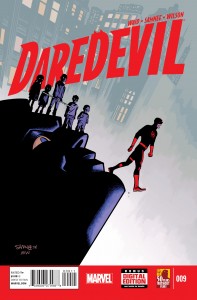 Speaking of effective creative teams: Waid’s an expert at spinning past continuity into sturdy present-day stories, and this issue offers the middle episode of a three-parter about the Purple Man, who can get anyone to do anything, and therefore has fathered a lot of children over the years, some of whom possess his mutant persuasion gene and signature purple skin. What happens when he gets them all together, and they turn on him, kill him and start to wreak havok in San Francisco? Hey, read it and see, and appreciate the smooth, precise-with-just-a-hint-of-retro Samnee art while you’re at it; just don’t expect things to go well for our hero (it’s the middle chapter, after all, so it’s no spoiler to say that it ends on a cliffhanger…). 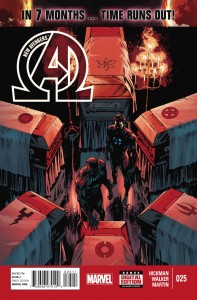 Hickman’s accelerating his plot as this book nears the end of his two-year-plus run; it’s eight months after the previous issue, and the Illuminati, or what’s left of them (Reed Richards, The Beast, The Hulk, Captain Britain and Amadeus Cho, with one other member appearing on the last page) are fugitives, avoiding the combined attempts of all the other heroes (including Sue Richards) to capture them for destroying other universes (if you haven’t been reading this title and its relatives, just trust me: it’s a very long story). Jump-ahead stories are always intriguing (when they “count,” anyway, which may be the problem with DC’s Futures End), and noting the status quo changes, measuring Reed’s new beard, and trying to figure out what happened to missing members Iron Man, Dr. Strange and Yellowjacket is all part of the fun. 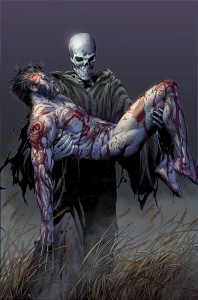 So, yeah: dead, bub; having Soule as writer means it’s at least literate, and McNiven as artist means it looks good, so it’s about as decent as could be hoped for this kind of thing. Cynicism honed by years of corporate-decreed event storytelling keeps it from having much impact for me, although I think they’ll let this stick for awhile (if there were a betting pool, I’d be putting money down on the “two year” slot). Give Marvel credit — it’s pretty hard not to buy this, isn’t it? 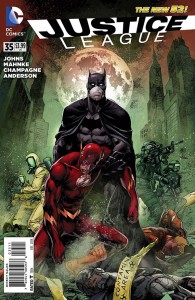 Standard Johns: a situation that tweaks the normal setup enough to be interesting (Lex Luthor knows that Bruce Wayne is Batman, and is now a member of the Justice League), mixed with a dependable art team (Mahnke and Reis are both good independently, although having them trade off pencilling here — combined with five inkers — doesn’t help the art’s consistency), combined with older-fan-friendly Easter eggs (the cliffhanger involves something called “the Amazo virus,” Amazo being originally a power-absorbing robot who fought the JLA, and hasn’t shown up in New-52 continuity yet). Stir well; sell lots of comics.

With 40 years of experience in comic reading, collecting and reviewing, English Professor Phil Mateer has an encyclopedic mind for comics. Feel free to ask Phil about storylines, characters, artists or for that matter, any comic book trivia. He will post your questions and answers on the AABC blog. His knowledge is unparalleled! He is also our warehouse manager, so if you are looking for that hard to find comic book, ask Phil!
View all posts by Phil →
This entry was posted in New Comics, Reviews and tagged Daredevil, Deadly Class, Evil Within, Justice League, Loki, Lumberjanes, New Avengers, Quantum and Woody, Sleepy Hollow, Supreme Blue Rose, Trees, Uncanny x-men, Wolverine. Bookmark the permalink.