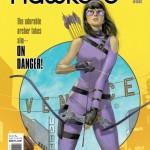 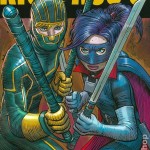 Kick-Ass 3 # 8 (  of 8  ) — Writer: Mark Millar;  Pencils: John Romita Jr.;  Inks: Tom Palmer Millar has said previously that this issue is the end of both this mini-series and the entire Kick-Ass saga; he’s been coy about hinting that one or both of the main characters might not survive. I won’t play spoiler here, but I’ll say that it’s a satisfying conclusion, and has been his best sustained work (and certainly, if you go by publicity and movie deals, his most successful) — and that I actually cared whether the characters would live, one of … Continue reading →