There weren’t quite as many good comics this week as in the last few months — summer is definitely starting to wind down — but still more than enough to make a decent reading pile. Let’s look…

This is the end of the book’s first arc, and it’s been a smart, stylish space story, with Carol helping the population of an oppressed planet against a seemingly-overwhelming military force (this issue’s scenes of an unarmed people protesting against heavily-armored authority figures echoes, quite by chance, recent events out of Missouri), with twists, reverses, lessons learned and a very satisfying conclusion.  Deconnick and Lopez have created a cool, very modern-looking comic here (the covers, uniformly striking and attractive, are an effective advertisement for the interiors), and it deserves to be a hit. 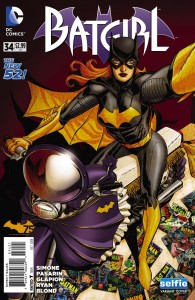 This book features a conclusion, too — it’s Simone’s last issue as writer (she left over “creative differences” with an editor who then left herself, and now the book’s being completely reimagined by a new team), so it wraps up a number of plotlines and character relationships from the last year or two in a climactic battle; I doubt it counts as a spoiler to say that Simone, who’s s total professional, leaves Barbara Gordon in a happy, healthy and stable place for the next crew — and that, if you’ve been following this book at all since its New 52 launch, you’ll probably want this issue. 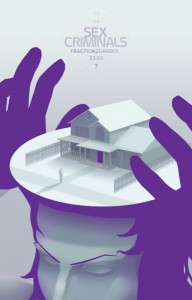 Like Captain Marvel, this is another book that’s smart and stylish, although in a different direction — it’s more fantasy than science fiction/space opera (the hook, if you don’t know, is that when the two main characters have an orgasm, the world slows down for them just like it does for Quicksilver in the X-Men: Days of Future Past movie, except with more sparkly colors and no Jim Croce “Time In A Bottle” on the soundtrack) and Zdarsky’s art is consequently more delicate and small-scale than Lopez’s (he does a lot with small glances and expressions, and his big splash scenes involve rooms full of sex toys instead of skies full of spaceships). All of this makes it sound like some icky farce, but it’s really not; Fraction’s intelligent scripts make it an unfailingly honest and realistic relationship book (well, you know, except for the stopping-time stuff) instead of just a sex book. It’s also got a six-page letters section that’s often hilarious and sometimes wise, and often worth the $3.50 cover price by itself. 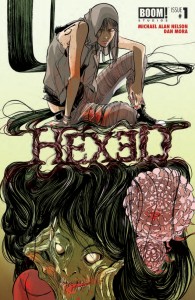 This is the second mini-series Nelson has done with this character, an occult thief-for-hire who specializes in fine art. The first series was drawn by Emma Rios, who created such a buzz this year with Pretty Deadly (and provided the cover for this first issue); Mora’s not quite at that level, but his visuals are attractive and detailed, with just a hint of manga, especially in a few of the faces and in the occult horror elements. The story doesn’t assume that readers already know the set-up, and is a good introduction, with a plot that zips along, an interesting supporting cast and villains, and a main character who’s smart and formidable (she’s sort of like John Constantine, except considerably more sympathetic). 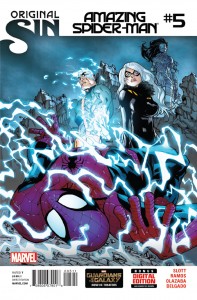 For a fifty-year-old property, this has shown remarkable energy lately — the whole Spider-Ock plot shook off a lot of the cobwebs (heh). Ramos’s cartoony style adds a unique plasticity to the faces and choreography, and Slott keeps everything moving briskly, with the Black Cat and Electro teaming up, a new spider-powered supporting character/romantic interest, a classic cliffhanger at the end, and a Peter Parker whom readers can find it easy to like and root for. 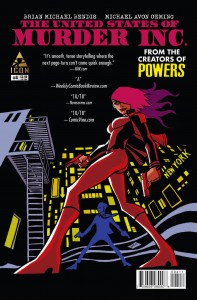 Two comics from Bendis (which seems like a typical week for him), with All-New X-Men offering one of those “day in the life” stories that don’t involve any big battles or continuing stories, but check in on all the characters, relationships and subplots. I like those, and an artist like Pichelli, who’s good at appealing expressions and figures, is an inspired choice to draw it; I also like how at the end 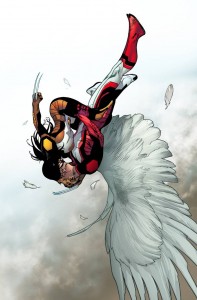 Bendis pulls that trick where he synchs the book up with the current Uncanny X-Men, by replaying a scene from that comic from the perspective of the characters in this one — all in all, it’s an effective issue, especially for new readers. US of M, I is much darker, with its Mafia-takes-over-the-East-Coast alternate history, and main characters who spend much of their time either getting shot at or shooting other people; Oeming’s angular faces and noirish layouts work well with the murderous material here (he turns out to be very good at casino-type settings, too, with a double-page splash at the end that’s just stunning). There’s also four pages of editorial material at the end (Bendis, Fraction and Robert Kirkman — with Rick Remender coming up close behind — are all masterful at the kind of breezy, fun letters sections that stoke fan enthusiasm, and it’s no accident that they’re also the top writers in the industry right now) where Bendis plugs his new book about comics writing, answering a number of questions about the topic from readers; anyone at all interested in that subject should read what he’s got to say.

If there’s a theme this week, it’s comics that are “smart,” and Busiek is one of the best at respecting his readers’ intelligence, and trusting in them to not need everything spelled out; he’s also good at writing about all the little nooks and crannies of a superhero world. Here, he and Anderson offer the first of a two-part story about robots — all those machines that bad guys use in a typical super-story — and a woman with an affinity for scavenging their remains, fixing them and befriending them. There’s more than that going on, of course, and attentive readers will be able to see where it’s going — but that means that Busiek and Anderson will be able to use their 48 pages (between this issue and next) to weave a sophisticated, condensed and satisfyingly human story that other writers would have needed twice as many pages to tell half as well. 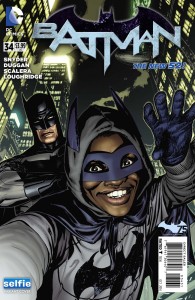 After last issue wrapped up the long-running “Zero Year” arc, this done-in-one tale gives Snyder and Capullo a rest (only Snyder’s listed, and just as a co-plotter), with next issue succumbing to the company-wide “Five Years Later” Futures End tie-in; presumably, then we’ll get back to a new longer story by the regular team. Here, a serial killer only preys on the lower classes, figuring he’ll stay off of Batman’s radar if he only kills “invisible” people — but doesn’t reckon with the Bat’s connection with Dr. Leslie Thompkins, or the way he looks out for all the citizens of Gotham, the poor and damaged ones more than most. The art reminds me a little of Denys Cowan — it’s suitably shadowy and effective at depicting its low-rent milieu, with a last-page splash that’s a memorable image with a memorable line — and it’s refreshing to see a well-constructed story that says everything it needs to, and accomplishes its job, in just 22 pages. 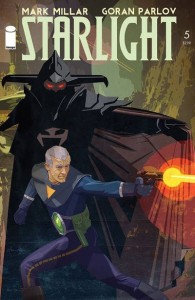 This Flash Gordon knock-off is about an Earthman who, decades ago, traveled to an alien planet and became their champion — but then returned to Earth, was disbelieved, mocked and grew old, and now has to go back to the planet and put down a dictatorship that’s enslaved the populace in his absence. After a decent first issue, it’s settled into an absolutely predictable rut: if you suspect that the hero will arrive on-planet, get captured by the bad guys quickly, get broken out by the rebels, have a spy in the rebel ranks betray and capture everyone and leave him for dead, and then recover and vow to free them and save the day… well, congratulations; you can plot just like Millar. The saving grace has been Parlov’s art; it’s Moebius-minimalist, every line exactly in place, and so confident that it makes the tired story seem brand-new; when the hero squints into the horizon, sets his jaw, and vows to win, it’s all so perfectly, cinematically rendered that we buy it completely. 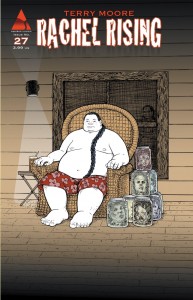 Moore, a humanist, can’t help but create relatable (if not necessarily likeable) characters, even in an occult/horror book like this; we really feel for Zoe, the pint-sized serial killer, when she has to dispatch a luckless former acquaintance because, really, what’s her alternative? You find out in the editorial material that the victim has the name and likeness of a reader who won a contest, a good example of Moore’s committed fan base; get five or ten thousand followers, connect them up via social media, and you can have a career, especially when you have a back catalog as deep as his: all those volumes of Strangers in Paradise, plus a couple for Echoes and for this one, offer new readers a lot of opportunities for enjoyment. The only puzzle here is the cover, which features a sort of Hawaiian version of The Governor, but whom we’ve never seen before, and never actually meet in this issue, either. So, why… ?

With 40 years of experience in comic reading, collecting and reviewing, English Professor Phil Mateer has an encyclopedic mind for comics. Feel free to ask Phil about storylines, characters, artists or for that matter, any comic book trivia. He will post your questions and answers on the AABC blog. His knowledge is unparalleled! He is also our warehouse manager, so if you are looking for that hard to find comic book, ask Phil!
View all posts by Phil →
This entry was posted in New Comics, Reviews and tagged All-new X-men, Amazing Spider-man, Astro City, Batman, Captain Marvel, Hexed, Inc., Rachel Rising, Sex Criminals, Starlight, United States of Murder. Bookmark the permalink.