Like last week, there were a bunch of first issues released this Wednesday, so let’s start with those:

For $2.99, this offers 32 pages of full-color Pope art, involving a jetpack-equipped hero defending kids against creepy mutants in a crumbling urban setting. It’s both a self-contained story and a setup/sneak peek at Pope’s new graphic novel series, Battling Boy, due out in a few months, but hey: reread this paragraph’s first sentence, and that’s all you need to know to understand why this is easily my book of the week. 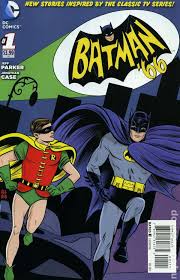 As the title implies, this new series offers new Bat-stories set in the universe of the ’60s TV show. Credit to DC for putting together an effective package — Case, whose past credits include Dark Horse Comics’ The Creep and the graphic novels The Green River Killer and Dear Creature, is an indy artist from Portland who mostly nails the retro-camp style required here (his layouts have the tilted, pop-art feel of the time period down, and his Frank Gorshin-y Riddler and Julie Newmar-y Catwoman are dead-on), and Parker, a seasoned superhero writer, supplies a plot that’s faithful and affectionate to its origins. Maybe this is too faithful to the show, though; it’s hard to remember, through the mists of nostalgia, that most comics fans over 12, especially Batman fans, hated its tongue-in-cheek, self-conciously-mocking style — so reproducing that style so closely might become self-defeating: who, exactly, besides a shrinking group of aging baby boomers, is going to buy this comic, or appreciate its hipster deadpan tone, consistently? Even if you’re not interested in a long-term relationship, though, get this first issue — as a one-night stand, it’s a fizzy, fun recreation of an brief-but-important period of pop-culture comics history. 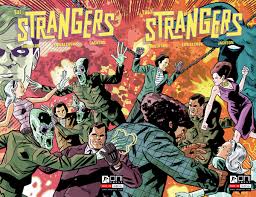 This is a retro-series, too, set in the same mid-’60s milieu as Batman ’66, and, while it’s not based on any particular TV show, it’s got echos of The Avengers, Man From U.N.C.L.E. and similar Cold War-era adventure stories, with the title crew, a dimension-traveling trio with small-scale super-powers, battling the machinations of O.C.C.U.L.T., a shadowy world-wide group of bad guys who want to conquer the world through supernatural means. Also like Bat ’66, it’s quite a bit of fun, at least in small doses — Oni was wise to release the first two issues at once, since they form one complete story (the covers even combine to form a diptych battle page), and give a good self-contained taste of the series’ charms.

Two other new #1s this week, both involving vampires (because what pop culture needs right now is more vampire stories…); Blood Brothers reads like a TV show pilot, a high-concept pitch (They’re buddies! And bail bondsmen! And live in Las Vegas! And vampires!!!) that manages to mash up Psyche, True Blood, CSI and a couple 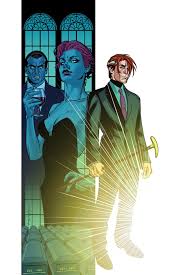 of other bits and pieces; it’s OK as quick cheap fun, but making it a three-issue mini-series was probably wise; it’s too slight and derivative to sustain much more than that. Day Men, about mortal “fixers” who handle the daytime affairs of a group of battling vampire families, is more solidly built, with a better artist (Stelfreeze is a seasoned pro) and stronger dialogue and characterization; I don’t care if I read any more Blood Brothers comics, because I know exactly where the story is going, but Day Men made me want to come back for the next issue and see what happens next to its main character.

A new first issue, but not exactly a new character — through its various Marvel and Dynamite incarnations, I count this as at least the 11th or 12th first issue starring Sonya — but this one has the advantage of Gail Simone, and her knack for combining drama, humor, violence, hope and cynicism in a way that fits the tough Hyperborian redhead as snugly as her chain-mail bikini. Here, she’s fighting long odds to train a ragtag army, to help out one of the few kings she wouldn’t slaughter just on general principles, and sword-and-sorcery fans should find this a smooth, addictive addition to their reading lists. 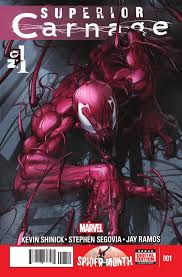 Something of a bait and switch here, at least in this first issue, since it’s just a standard Carnage story, with no appearance by Spider-Man (an annoying recent habit of Marvel, since the same thing happened with the Superior Foes of Spider-Man title a few weeks ago); in fact, since the plot involves the Wizard trying to break a comatose Cassady/Carnage out of prison, as part of a typically-convoluted scheme involving the Frightful Four, this is more of an FF book than a Spider-Man one. It’s perfectly OK as a Carnage story, mind you, and fans of that character’s exercises in psychopathology will probably like it, but the misdirection (assuming that Spidey — hmmm… can you really call the Doc Ock version “Spidey”? — doesn’t play a major role in the other four issues) still leaves a bad taste.

Whew — that’s a lot of number ones! What about all the regular titles, though? This was mostly a Marvel week, thanks to a number of books by some of that company’s better writers, so let’s focus on those…. 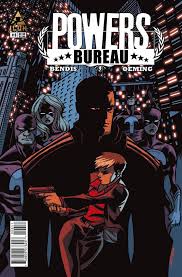 Three by Bendis — so, a typical week for Marvel’s comic- 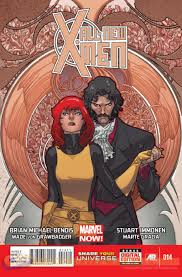 producing machine (and for Icon, its more creator-friendly, Vertigo-like imprint, which provides 2/3 of the books here). Powers and Scarlet benefit because, as creator-owned works, they let the writer throw in his typically chatty, long (three or four pages) and entertaining letters pages — in fact, aspiring writers would do well to read both of them, since Bendis offers a number of encouraging and useful tips for beginners. Powers also concludes the first story arc of this new iteration of the title, and it’s nice to see that Walker and Pilgrim’s adventures — now as FBI partners — are as brutal and dialogue-heavy as ever. Scarlet is still in the middle of a story, and moving slowly, 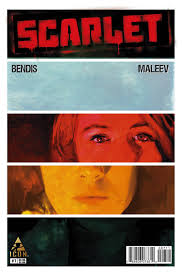 but its focus on one non-powered, “real-world” character fighting local corruption and injustice via an Occupyesque movement lends itself to the more leisurely style (and Maleev’s dense, pretty art is more rewarding at the slower pace, anyway.). Meanwhile, All-New X-Men just rockets along, with its young time-displaced mutants interacting merrily with Kitty Pride, Wolverine and the rest of the X-cast; its focus on a purely corporate superhero universe, along with Scarlet’s indy noir sensibilities and Powers smack in the middle, combining both genres, shows just how versatile a writer Bendis is, and how valuable to Marvel right now. 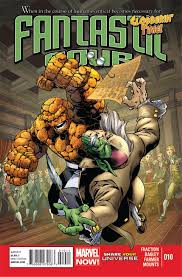 Two by Fraction, one of Marvel’s other mainstay writers right now; Fantastic Four is starting to reach the climax of its first year’s arc, as the team’s powers are slowly deteriorating, affecting them physically and mentally as they continue to travel through time and space seeking a cure (this issue sees them bickering with each other, and sparring with Skrulls, at the Continental Congress, and 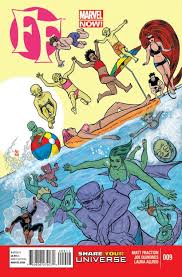 Bagley proves adept at Revolutionary style, with a particularly nice job on historical figures like Franklin and Jefferson). FF focuses on the Future Foundation kids, via a self-produced documentary and a pool party, as the grownups consider an offer of help; it’s weakened by not having Michael Allred art, but Quinones keeps the style within range, and the chance to throw a couple of pages of spotlight on many of the more minor characters helps to enrich the overall story, so it’s still worth picking up. 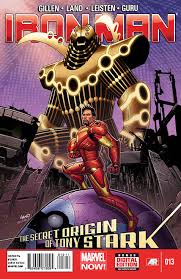 Gillen, Aaron and Hickman represent the other top Marvel writers right now (Gillen’s killing it with Young Avengers, and Aaron has spent a couple of good years on Wolverine and the X-Men, while Hickman had a very well-regarded 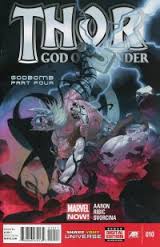 long run on Fantastic Four), so they belong on this list, too. Iron Man offers a spacebound Tony Stark, captured by a rogue Recorder who wants him to be Earth’s defender against alien invasion via permanently melding him with a five-mile-high battle suit (Guillermo Del Toro, eat your heart out…), and also offers Death’s Head, a character of whom I’m inexplicable fond (his speech patterns are somehow deadpan-English funny, yes?); Greg Land, without any women to draw, avoids lightboxing any porn-magazine poses and just concentrates on cool visuals instead. Thor is the antepenultimate issue of Aaron’s long Godkiller tale, and continues to offer three time-displaced versions of its lead character, and a 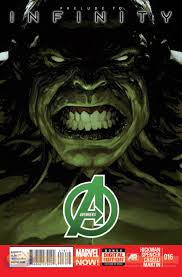 very explosive ending; this title, thanks both to Aaron and to Ribic’s sword-and-sorcery-friendly art, has been getting a lot of favorable critical commentary lately, so might be worth a look for readers who haven’t been picking it up — all the back issues are available, either at cover price or for a buck more for the earlier ones, so there’s not even a reason to wait for the inevitable trade…. Finally, the next eight months or so are going to be very Thanos-centric at Marvel, as the Guardians of the Galaxy movie looms next summer (with him as the featured villain), and Hickman’s two Avengers books have been gearing up for Infinity, a mini-series and crossover featuring the purple-faced Titan and calling back to the popular Jim Starlin-written ’90s series like Infinity Gauntlet, Infinity War, etc. This issue helps to finish setting up the prelude to that event (as have, really, all of the issues since the Marvel Now! relaunch; Hickman plays a long game), offering yet another reason to get it. 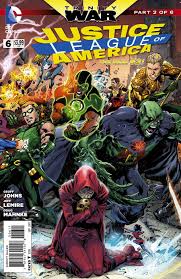 Johns, of course, is the DC counterpart to creators like Bendis, and Lemire is a rising star, moving from his impressive Vertigo series Sweet Tooth to more mainstream superhero fare; between them and Mahnke, who’s one of those rare artists able to draw dozens of costumed characters effectively, this is a sturdy chapter in the company’s latest crossover event, one that sees Superman having (apparently) accidentally killed a new Dr. Light, and all the JL teams at odds over Pandora and her mythological Box (You two! In the back, snickering like Beavis and Butthead! Cut it out!) 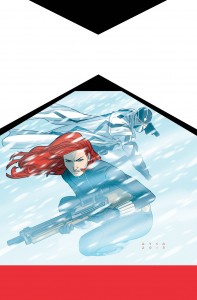 This is worth noting because it’s got a rare mainstream story from Warren, involving Domino and the Scarlet Witch , and their probability-based powers, against a giant Celestial battleship that uses the same forces. It’s only ten pages, but Warren packs a lot of story and art in there, and it’s a good example of his sly, smart (and smart-alecky) approach to storytelling.

Just a reminder that this title’s been around for more than ten years now, and is as engaging, thoughtful, imaginative and good-looking as ever; this issue is by the original creative team, too (Willingham’s always been the writer, but the art chores sometimes change, to give Buckingham and Leialoha a rest), and starts a new arc, so it’s a great time to jump on board, or to check it out if you’ve somehow never read it before.

With 40 years of experience in comic reading, collecting and reviewing, English Professor Phil Mateer has an encyclopedic mind for comics. Feel free to ask Phil about storylines, characters, artists or for that matter, any comic book trivia. He will post your questions and answers on the AABC blog. His knowledge is unparalleled! He is also our warehouse manager, so if you are looking for that hard to find comic book, ask Phil!
View all posts by Phil →
This entry was posted in New Comics, Reviews and tagged All-new X-men, Avengers, Batman '66, Battling Boy, Blood Brothers, Day Men, Fables, Fantastic Four, Iron Man, Justice League, Mysterious Strangers, Paul Pope, Powers: Bureau, Red Sonya, Scarlet, Superior Carnage, Thor. Bookmark the permalink.