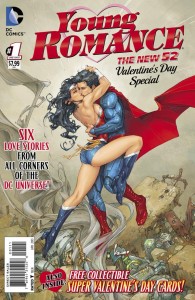 DC exhibits rare good timing, with a 48-page Valentine’s Day special the week before the event. If your significant other is a DC fan, this $7.99 package would be a decent present: the leadoff Catwoman/Batman story is good, while there’s welcome diversity in the Apollo/Midnighter tale (and the best art); the Superman/Wonder Woman story that’s cover-featured ends the book, and is just OK — it offers a restaurant-night-out-interrupted-by-bad-guys bit that Justice League used just an issue or two ago, and nothing all that romantic actually occurs. On the other hand, the centerfold offers 18 punch-out valentines on heavy stock, just like the kind you used to give to classmates in third grade, and all DC-hero-themed and full of cheesy puns (Aquaman: “Let’s make a splash, Valentine!”, etc.). Of course, no true fan would (shudder) actually punch the things out, and lower the condition of the book, but they’re nice to look at, and a cute addition that sets just the right tone for the rest of the book.

Three by Bendis: Scarlett is the first issue after a year-long absence, with a fascinating explanation for the lateness — 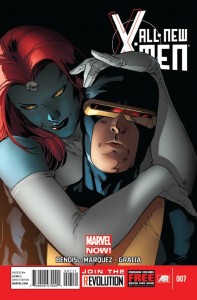 the book’s plot, about a girl fighting establishment corruption, got so overtaken by real-world events like the Occupy movement, the Arab Spring, etc. that Bendis and Maleev froze up on it (Bendis talks about being spooked when he wrote a scene where protestors take over the Portland waterfront, only to have exactly that happen in real life). True or not (and why not? Writers tap into the zeitgeist all the time…), it’s an imaginative excuse, and with everyone promising to get the book back on schedule again, it’s worth another look — the Bendis/Maleev team offers a gritty, ripped-from-the-headlines, non-superhero story that’s equal parts inspiring and frightening. Actually, All-New X-Men offers a very similar scene, where Mystique talks to the younger version of Cyclops about how his idealism makes him both ruthless and unstoppable 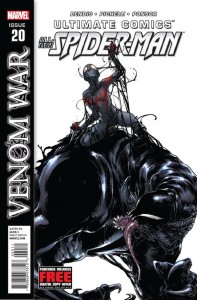 when he knows he’s doing the right thing — a description that fits the heroine of Scarlet just as well. Otherwise, the books are very different — A-N X-M is flashy, well-done superhero soap opera, with the massive X-cast and all kinds of tie-ins to current Marvel continuity, and time travel and costumes and all the expected drama and fun — but the themes about revolution, and whether its necessary and worth cost, aren’t all that different. Ultimate Spider-Man is the most traditional super-book of the three, with its teenage hero, his best-friend sidekick, and the menace of a monstrous Venom, and it sometimes feels a little paint-by-numbers (I’m getting tired of the “spider sting” being able to save the day every time, and of the way that Marvel Ultimate cops never, ever give Our Hero a break (and didn’t when he was Peter Parker, either)); on the other hand, it’s a smoothly-told, exciting story, and the Sara Pichelli art is a welcome, pitch-perfect addition, so any complaints are small ones.

I picked this as comic of the week — it’s the culmination of a lot of events over a lot of years (although it isn’t the last issue of the series, by any means), and Mignola’s art and writing are both so evocatively spooky and so precise, without a wasted word or line, that they make the book a pure pleasure to read. Get this if you want to see what it looks like when a creator spends over 20 years on a character, and grows into a master craftsman along the way. 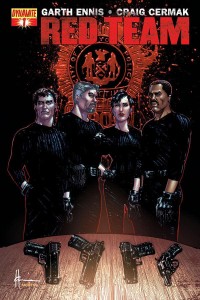 A new series by Ennis, about an elite team of NYC detectives who get frustrated at trying to take down a killer drug kingpin by the rules, and decide to take matters into their own hands. Cermak’s layouts remind me of Russ Braun’s in The Boys, but this offers none of the superheroic parody or convention piss-taking of that book; it’s a grim, realistic cop tale, real-worldly in the manner of his Battlefields, and a very good examination of the fine line between the good guys and the bad.

The next two installments of Hickman’s Avengers reboots. New Avengers is the better one, as it involves the Marvel Illuminati using the Infinity Gems to fight off a (literally) earth-shattering menace. They do, temporarily, but things go very wrong, and Hickman shows that he isn’t afraid to shake things up or debate big issues. It’s a little disturbing 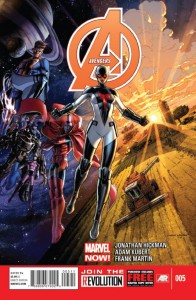 that the ending is a pretty precise echo of the trigger part of DC’s Identity Crisis, but I trust Hickman to go somewhere new with it, and definitely want to read what happens next. Avengers is one of those one-issue puzzle pieces that spotlight a new character: in this case, the earthwoman who’s both a member of the space-spanning Imperial Guard and the Avenger called Smasher. That sounds stupid when you say it, but Hickman and Kubert make this a fun and effective origin story, with lots of emotion and even a couple of Easter eggs (her last name is Dare, and her grandfather/mentor’s name is Dan… which makes more sense if you’re a follower of English comics); like New Avengers, this is a book that promises to be entertaining for a long time. 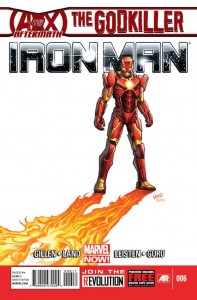 Yet another Marvel Now! reboot that’s doing well — Gillen has taken Tony Stark into space too, where he’s seen as a spaceknight, fighting evil, hanging out with alien princesses (in scenes where Land’s standard lightboxings of female figures and faces actually look pretty good), and getting into trouble because of cultural differences (heh…:”The strands of keratin! Oh god. That’s hideous!”) and because of past indiscretions that are hinted at in the story’s title (you can see it in the cover shot, just over there…). 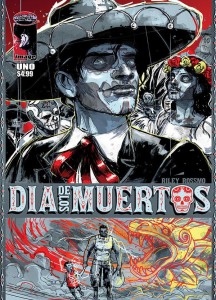 Rossmo’s the guy behind Cowboys, Vikings and Aliens, and this oversized book shows off his art in three stories (by three different writers) that, as the title implies, involve ghost stories south of the border: one about a girl with ties to the land of the dead, one about a young exorcist who finds that the living do more damage than ghosts, and one about a cantina singer in mourning and the girl who reminds him of his lost love. These are all wonderful to look at: spooky, sexy and often sad, but very well-told, and worth seeking out. 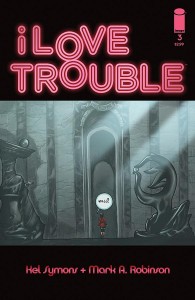 This book about a young teleporter and her adventures continues to appeal because the story makes her a fascinating character, and the art,  just the right combination of cartoony and realistic, looks like no one else’s. This third issue is mostly set-up and conversation, as she’s courted by a shadowy organization’s frontman, but it’s all such a charming and unique package that readers won’t be able to help coming back for more.

As its title implies, this book is set in the land of fairy tales, where the characters are forced to play the same parts over and over, like actors under contract to a big studio (which, in this case, is one of the Grimm brothers). Kind of stupid, potentially (and I don’t always trust Jenkins to tell a good story), but it’s redeemed by the Ramos art; he’s just the right guy to make the fantasy setting and characters sparkle (hey, Bill Willingham: get him as a guest artist for an issue of Fables…).

This mini-series is kind of a film noir/Comic Book Men mashup, as the lead character, a slacker employee in, yes, a comic book store, finds a cell phone in a park that turns out to belong to a guy who keeps showing up dead… and then alive. Clones? Aliens? Time travel? Hard to tell yet, but, as with Fairy Quest, it’s the art that pulls in the readers: look at that cover, and recall Jock’s iconic Joker-dissolving-into-bats Detective cover from last year, and then try to resist reading this.

Grist, probably best known for his long-running Jack Staff, is clearly having fun with this British tale of a teenager who stumbles upon mysterious mudlike powers, and then tries to figure out what to do with them. There’s a cool early-Spidey feel to the proceedings, and Grist’s clear line, knack for caricature, and combination of realistic public-school setting and fantasy events make this worth a look. 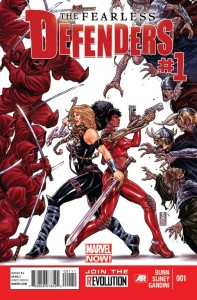 Another Marvel Now! reboot, although a big change from the last incarnation of this title, as Misty Knight gets hired by a young archeologist (who grew up watching Indiana Jones movies) to track some lost artifacts, which turn out to be Viking and attract both zombie warriors and Valkyrie. The story’s a good starting-to-get-the-band-together episode, and the three main characters are all well-drawn and intriguing; Sliney’s art combines standard superhero work with just enough manga and indy influences to make it unique; the result is a book that’s quite a bit better than I thought it would be. 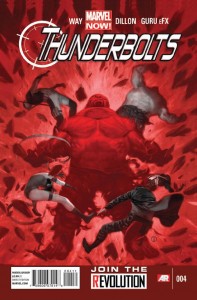 This issue feels better than the last one: there’s more action, and it makes more sense, and, really, how can you resist a story where one character fights a massive bad guy by strapping a live land mine to his own chest and then jumping on him — especially when it’s drawn by Steve Dillon?

Stuff I bought and liked, but have nothing new to say about, so look up previous reviews in the

With 40 years of experience in comic reading, collecting and reviewing, English Professor Phil Mateer has an encyclopedic mind for comics. Feel free to ask Phil about storylines, characters, artists or for that matter, any comic book trivia. He will post your questions and answers on the AABC blog. His knowledge is unparalleled! He is also our warehouse manager, so if you are looking for that hard to find comic book, ask Phil!
View all posts by Phil →
This entry was posted in New Comics, Reviews and tagged All-new X-men, Avengers, Dia de los Muertos, Fairy Quest, Fearless Defenders, Hellbiy, I Love Trouble, Iron Man, Mudman, Red Team, Scarlet, Snapshot, Thunderbolts, Ultimate Spider-man, Young Romance. Bookmark the permalink.