It Came From the Back Room #45 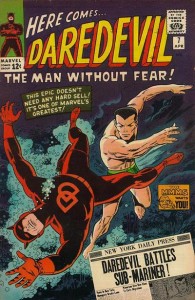 Standard recap: I’m slowly going through AABC’s one-million-plus back-issue room, restocking the boxes on the sales floor and pulling stuff to sell as discount/overstock/special items (these are featured at the discount racks at the west end of the store for a couple of weeks after each post, and then go to the discount racks on the east end of the store for a few weeks, and then disappear into our warehouses, so get them while you can). I’m going through the alphabet backwards (don’t ask), and at my speed (especially with the school semester in full gear), this amounts to a two-and-a-half-year project.  This week, we’re still featuring the letter”D,” specifically, the last “D” title of ’em all: Marvel’s Man Without Fear… 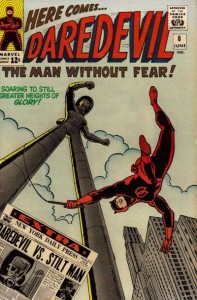 Daredevil’s first issue appears cover-dated April, 1964, and from the start he has two hooks: the swashbuckling, fearless adventurer implied by the title, and the fact that he’s blind. There had been blind heroes before — DC’s Dr. Midnite, for instance — but they were usually cheats of some kind (Midnite had special lenses that not only let him see fine, but let him see in total darkness). Daredevil really can’t see at all: in the origin, a young Matt Murdock saves a boy from being run over by a delivery truck, but a radioactive canister in the truck hits him in the forehead, blinding him. Of course, there’s compensation: the radioactivity somehow enhances his other senses, giving 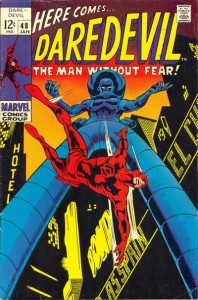 him dog-like hearing, enhanced smell and touch, and a “radar sense” that lets him perceive movement in a 360-degree radius around him. However, it’s not sight: he can sense outlines, but he can’t see color; he can “read” a headline by running his fingers along a newspaper, but if that paper’s held up in front of his face he can’t sense any letters or words.

Early issues establish the setting and supporting cast: Murdock is a lawyer, a partner in a firm with his old friend Franklin “Foggy” Nelson, with their secretary, Karen Page, playing the potential love interest. DD has the advantage of top-level creators from the start: the first issue is by Stan Lee and Bill Everett, with Wally Wood and 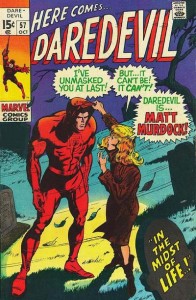 John Romita also providing art for the first year and a half. Then, with issue #20, Daredevil’s classic artist, Gene Colan, arrives; with a few rests, he’ll provide the visuals for the blind attorney and his friends for the next seven years, through issue #100. I’ve sung Colan’s praises before, so I’ll be brief here: suffice it to say that his eloquent expressions, moody style, and imaginative layouts make DD one of the best-looking books on the stands.

Lee apparently likes the title, too, since he stays on as writer through issue #49 (March, 1969); with #50, Roy Thomas comes on board, accompanied by a very young (and still developing) Barry Smith, who stays for three issues, after which Colan comes back. Thomas remains 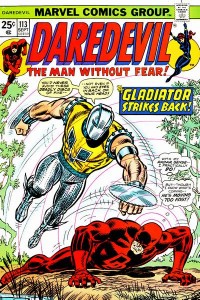 until issue #69, and is replaced by Gerry Conway, who sticks around until issue #98; he’s replaced by Steve Gerber, and after Colan’s farewell in issue #100 the art falls to Rich Buckler and Syd Shores before Don Heck takes over with issue #103; he stays through issue #106 and is replaced by Bob Brown. Gerber and Brown stay through issue #117 (although Colan supplies the art in #s 110, 112 and 116), and then Tony Isabella scripts over Brown’s pencils from issue #119-123. Len Wein scripts issue #124 (with Colan art), but the next issue is by Marv Wolfman and Brown, and that team remains through issue #135, a run that’s most notable for its introduction of the villainous marksman Bullseye in issues #131-132. Wolfman continues after that, with art by 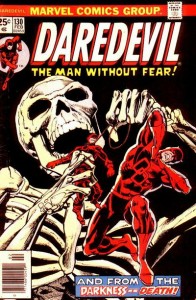 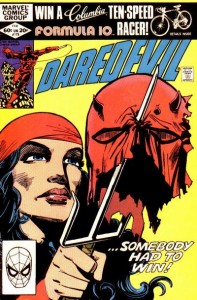 Miller’s tenure starts slowly, as he finishes up a McKenzie Death-Stalker story in his first issue, but by #s 160 and 161 (with the Black Widow and Bullseye), he’s starting to attract attention.  Issue #162 is a fill-in (by Steve Ditko, of all people), but Miller’s back the next issue (with a Hulk guest-appearance), and by #165’s Dr. Octopus issue he’s being credited as co-plotter; by #168, he’s both scripter and artist, as he debuts the mysterious ninja and old Matt Murdock love interest Elektra. For the next year, Daredevil is the hottest book in comics, as Miller combines Elektra, the Kingpin, Bullseye and the shadowy ninja group The Hand into a sprawling story that climaxes

with Elektra’s death at the hands of Bullseye in issue #181. That’s followed by a classic Punisher crossover in #183 and 184, and then Miller scales back on the art chores, providing layouts for inker Klaus Janson to finish starting with issue #185.  The next few issues provide a run-up to the resurrection of Elektra in #190; that’s followed by Miller’s finale as both writer and full artist in #191, where Daredevil plays Russian roulette in a hospital room with a paralyzed Bullseye.

Things quiet down considerably after that: Janson takes over the art chores in #192, while Alan Brennert has the unenviable task of following the massive fan favorite 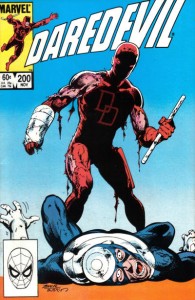 Miller as writer. He’s only there for one issue, though, as Larry Hama writes #193, and new “permanent” scripter Denny O’Neil comes aboard with issue #194. Janson leaves with issue #195, and by the time William Johnson accepts the art chores with #196, even a guest appearance by the then-hot Wolverine can’t create any buzz for DD. O’Neil’s run isn’t bad — he’s too professional a writer for that — but it doesn’t stand out, either; there’s a long subplot involving Micah Synn, a savage from a lost tribe who ends up in New York as both an enforcer and the toast of high society, that has a clever denouement, but otherwise it’s the next “good artist” appearance that sparkles: a David Mazzucchelli art job on #206. There’s a Harlan Ellison script involving a death-trapped

house in #208, also with Mazzucchelli, who then ends up sticking around through issue #217; best of all, Miller returns to script the one-shot #219, over John Buscema art, in which an out-of-costume Murdock plays a mysterious stranger who ends up trying to redeem a corrupt small town, with mixed results; it’s a fascinating precurser to some of the same themes Miller would return to in Sin City.

After more O’Neil/Mazzucchelli work in issues #220-223 and 225, Miller returns as writer with #226, and he and Mazzucchelli embark on the “Born Again” arc; it starts in #227, as the long-forgotten Karen Page, now a junkie and 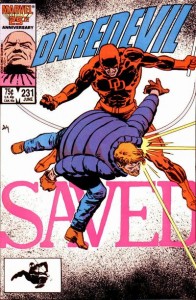 … and that’s a good place to stop for this week; check out many of these issues from around #183 and up out on the discount racks (including some of the Miller ones) for just 99 cents, and tune in two weeks from now for the scoop on DD’s more recent books.

With 40 years of experience in comic reading, collecting and reviewing, English Professor Phil Mateer has an encyclopedic mind for comics. Feel free to ask Phil about storylines, characters, artists or for that matter, any comic book trivia. He will post your questions and answers on the AABC blog. His knowledge is unparalleled! He is also our warehouse manager, so if you are looking for that hard to find comic book, ask Phil!
View all posts by Phil →
This entry was posted in Comics History, Marvel, News & Promos, Reviews and tagged Daredevil, David Mazzucchelli, Denny O'Neil, Frank Miller, Gene Colan, Stan Lee. Bookmark the permalink.

2 Responses to It Came From the Back Room #45