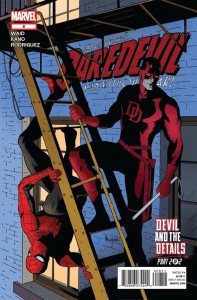 DD continues to be a bright spot among the Marvel books — literally, since its pages are splashed with lots of reds, blues and other primary colors. That gives it a unique look (even when a different artist is drawing it, as here, although Kano turns out to be a good match for the previous pencillers), and suits its sunny, optimistic stories. This issue, the second part of a crossover with Amazing Spider-Man, features Spidey, DD and the Black Cat battling bad guys (and sometimes each other), and ends with an intriguing new relationship; let’s just say that if Felicia is an analogue to DC’s Catwoman, and Matt has some traits in common with Batman, then it was probably inevitable…. 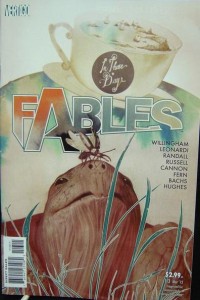 This is one of those take-a-break issues that Willingham throws in every so often: a bunch of small stories of times past, self-contained but crisscrossing into the regular continuity in a couple of ways, and giving a number of different artists a chance to participate. Russell and Hughes are the standouts, but everyone seems to be having a good time; the fairy-tale fantasy milieu gives artists a chance to stretch their abilities, and their enthusiasm shines through. “Turtles all the way down,” indeed. 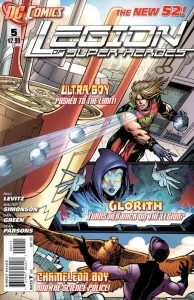 Another comic worth noting for its art: Walt Simonson might not be the first guy who comes to mind as an LSH chronicler, but his penciling is always a treat. This, like Fables, is something of a change-of-pace story, as Levitz tracks 24 hours with the team, and shows most of its members just living their lives instead of battling any cosmic-level bad guys; new readers will be equally confused and intrigued by all the characters and relationships on display, but longtime fans should like it a lot.

I’ve never warmed that much to Azzarello; I didn’t like his Superman arc, and only got maybe a third of the way into 100 Bullets before losing interest (I knew it was good, and that I ought to be reading it, but just didn’t like it that much). Thus, I keep almost-dropping this book; however, the creators keep pulling me back: I like the way the gods are written as bickering soap-opera characters, and I especially liked the book’s last few pages — Akins really shows his stuff in two big splashes involving Lord Poseidon (heh: “splashes”? “Poseidon”? Is this thing on…?), and the clever way Diana’s able to hold her own with her divine antagonists. Sign me up for a few more…. 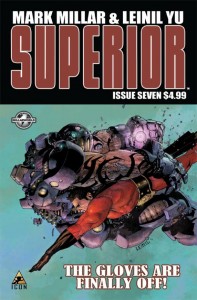 The conclusion of Millar’s latest foray into super-hero marketing: there’s a big, satisfying battle, and Yu does a good job with all the big scenes and elaborate set pieces he’s called on to draw. It’s a cinematic comic in both the best and worst senses: like, say, Independence Day, it has multiple plot holes that you could throw a giant transformed alien through (the “soul” thing makes no sense at all), but the story just rockets ahead so quickly, and with so many satisfying small scenes and twists, that the readers finish the book happily; it’s loud, goofy fun, and any criticism, however legitimate, seems besides the point. 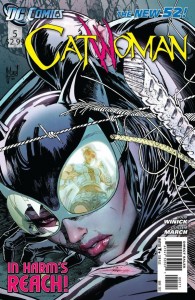 This book started with controversy (Bat-sex will do that), but it was obviously deliberate: it generated press, and guaranteed that the comic wouldn’t be seen as boring. Meanwhile, Winick has established his heroine as feisty, smart and a survivor, and each issue has enough cool little moments and cliffhangers to keep those initial readers coming back for more; stir in March’s inviting art, and ability to make Selina look alternatively imposing, sexy 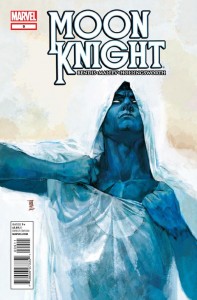 and vulnerable, as the story requires, and it’s clear that this book is a survivor, just like its title character.

Three by Bendis: Moon Knight is one big battle scene, and ends with a major, and tragic, plot development; Maleev’s shadowy, nuanced art, and the title character’s Greek chorus of superhero voices in his head, make it worth looking at. Ultimate Spider-Man also benefits from its visuals — Samnee’s one of the best young artists out there right now; his drawing, although it doesn’t look anything like John Byrne’s, is somehow still good at echoing both Byrne’s clear storytelling and sense of fun, which makes 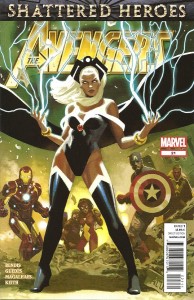 Miguel’s adventures appealing. The story itself is still in young-hero-learns-the-ropes mode, and reminiscent of Bendis’s earlier work on the title (there’s a scene with the cops that we’ve seen at least a couple of times before); that’s the same trouble with Avengers, wherein all the Norman Osborn/evil Avengers stuff seems like a rerun (plus, there’s a truth-in-advertising issue: the cover showcases Storm, who only shows up in the story for two pages, unconscious). Still, it’s another chapter in the ongoing adventures of Marvel’s biggest stars, and even with its faults it’s readable and engaging enough to keep its audience satisfied. 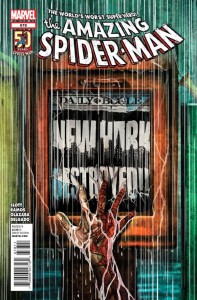 Three titles linked because they’re all readable and

engaging, too, but there’s not that much else to say about them. ASM starts a two-parter wherein Peter sees a destroyed New York City 24 hours into the future, and knows that something he either did or didn’t do led to it… but what? The suspense, and the Ramos art, carry it along nicely. Iron Man continues the machinations of the Mandarin (who’s proving, to the chagrin of people like Obadiah Stane and the Living Laser, that he’s not an ally who plays nicely with the other super-villains); Fraction and Larocca have been at this long enough for readers to trust them, and trust that the story will eventually resolve itself satisfactorily. So too for UXM, wherein Gillen and Land build off of events in Uncanny X-Factor, and throw the team into a Savage Land-like hostile environment and then let the sparks fly.

With 40 years of experience in comic reading, collecting and reviewing, English Professor Phil Mateer has an encyclopedic mind for comics. Feel free to ask Phil about storylines, characters, artists or for that matter, any comic book trivia. He will post your questions and answers on the AABC blog. His knowledge is unparalleled! He is also our warehouse manager, so if you are looking for that hard to find comic book, ask Phil!
View all posts by Phil →
This entry was posted in New Comics, Reviews and tagged Amazing Sppider-Man, Avengers, Catwoman, Daredevil, Fables, Iron Man, Legion of Super-Heroes, Moon Knight, Superior, Ultimate Spider-man, Wonder Woman, X-men. Bookmark the permalink.