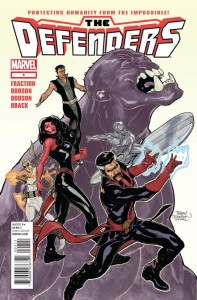 This is Marvel’s latest attempt to revive this franchise, a best-seller in the ’70s and ’80s but not particularly successful since then, and Fraction’s using leftover plotlines from Fear Itself to do it (specifically, the Nul character who possessed the Hulk, now loose in our world and threatening to break the universe). The core group of Dr. Strange, Silver Surfer and Namor are there, with the Red She-Hulk substituting for Bruce Banner, and Iron Fist thrown in (presumably because Fraction likes writing him). As with Iron Man and Thor, Fraction provides smart, offbeat character stuff, an interesting menace, and

enough cool hooks to bring readers back; add in the Dodson art, and maybe this version of Marvel’s non-team team book (their tagline this time: “Protecting humanity from the impossible!”) might just have a chance.

The Bisley/Milligan team has been providing some moody, high-quality horror stories on the regular Hellblazer book over the last few years (thanks especially to Milligan’s feel for the character, and the way the art’s shot straight from Bisley’s wonderfully-caricatured, lushly-delineated

panels), and this 38-page story, about a bridge that lures suicides, showcases their talented teamwork well.

Two by Lemire: Animal Man has been one of the critical favorites of the DC New 52, and Foreman’s imaginative art — especially in the otherworldly sequences, or when dealing with the shapeshifting monsters that have been tracking Buddy’s family — has been a big part of it. So, too, 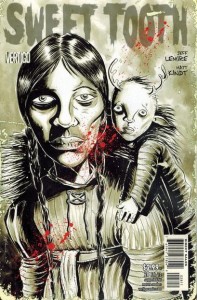 has Lemire’s knack for making all the members of the Baker family sympathetic and intriguing (next to Maxine, Cliff and Ellen, Buddy’s often threatened with being only the fourth most interesting character in his own book), and for coming up with last-page cliffhangers that emphasize the book’s horror aspirations, and guarentee that readers will keep coming back for more. Sweet Tooth has been more of an individual vision, since Lemire has been both writing and drawing it — but the last three issues, concluding with the current one, have had guest art from Matt Kindt. Featuring a flashback set in the Arctic of the early 1900s, they’ve revealed parts of the origins of the book’s dystopian future, and are notable because of Kindt’s style, which uses watercolors and sketchy pencils to create a dreamlike, fairy-tale mood that’s unlike anything else in mainstream comics. 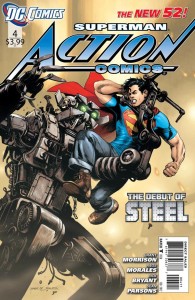 We’re smack in the middle of a storyline — a Morrison storyline — so there’s a lot going on (Brainiac, Steel, rampaging robots, bottled cities, etc., etc.), and no resolution yet, and no longer even the pleasure of exploring the personality of the “new” Superman (who doesn’t get all that much screen time in this issue). It’s well done for all that, and fine as a chapter in a larger story — but it’s too bad that Morrison couldn’t have made this more satisfying as a stand-alone story, too (something he was largely able to pull off in his earlier All-Star Superman, which had a similar overarching story, but managed to make the individual parts work independently, too).

I like this book; it would seem like too much of a quick, deconstructed read, but Maleev’s art slows the reader’s eye down, to linger on many of the little facial effects and small filagrees of panel composition, so that each page seems worth absorbing slowly (Matt Hollingsworth’s color art effects contribute considerably to this, too). Add in the Moon Knight/Echo relationship, the way the two leads are vastly outweighed by the powers of their adversary, and Spector’s running inner-multiple- 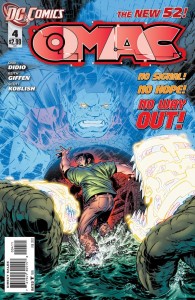 This continues to be a rollicking tribute to all things Kirby (and The King gets a nod in the credits, too); as long as Giffen stays on as co-writer and penciller (Scott Koblish, the inker, is doing full art on issue #6, but Giffen says that doesn’t mean he’s going anywhere), I’ll keep reading it, to marvel at the pretty colors, the craggy features, and the way that Max Lord, Makarri, Brother Eye, pre-fab women,

and all the other ingredients coalesce into a tasty Kirby-tribute stew.

Followers of the regular Lapham/Baker Deadpool Max series will want this — Lapham and Baker each supply art to a third of the book, with Lapham writing the whole thing, and it’s their typical tale of Wade and Bob the Terrorist acting like Looney-Tune characters in a slightly-skewed Marvel universe, except this time with tinsel and Santa Clause hats added, in honor of the season. 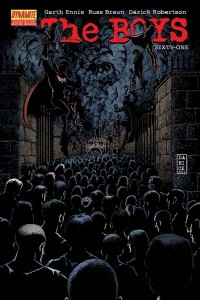 This book’s edging closer to its (presumably apocalyptic) conclusion, and I like the way Ennis’s characters are tending against type: Annie, the naive one at the beginning of the story, has strengthened, while Hughie is frustratingly stalled out, unable to progress in their romance. Will he grow a pair? Will they find true love? Will it matter if the world’s been cracked in half? Mix in the Teen Titans parody, the Image-group parody, and the last-page reaction shot (where each character’s personality is revealed, neatly and silently, in their response to an upcoming fight), and it’s easy to see why Ennis has built such a following as one of the best pop-comics writers of his generation.

With 40 years of experience in comic reading, collecting and reviewing, English Professor Phil Mateer has an encyclopedic mind for comics. Feel free to ask Phil about storylines, characters, artists or for that matter, any comic book trivia. He will post your questions and answers on the AABC blog. His knowledge is unparalleled! He is also our warehouse manager, so if you are looking for that hard to find comic book, ask Phil!
View all posts by Phil →
This entry was posted in New Comics, News and Events, Reviews and tagged Action Comics, Alex Maleev, Animal Man, Deadpool, Defenders, Garth Ennis, grant Morrison, Hellblazer, Jeff Lemire, keith Giffen, Matt Fraction, Matt Kindt, Moon Knight, Omac, Peter Milligan, Simon Bisley, Sweet Tooth, The Boys. Bookmark the permalink.