It Came From the Back Room #37 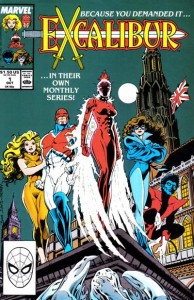 Standard recap: I’m slowly going through AABC’s one-million-plus back-issue room, restocking the boxes on the sales floor and pulling stuff to sell as discount/overstock/special items (these are featured at the discount racks at the west end of the store for two weeks after each post, and then go to the discount racks on the east end of the store for a few weeks, and then disappear into our warehouses, so get them while you can). I’m going through the alphabet backwards (don’t ask), and at my speed (especially with the school semester in full gear), this amounts to a two-year project.  This week: The letter “E,” as brought to you by two Marvel titles: 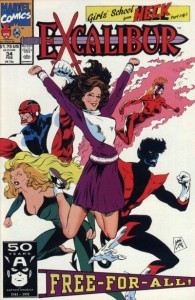 This begins as an X-Men spinoff in the late ’80s, and is part of the Chris Claremont Traveling Mutant Show: written by him and set in England, it features Captain Britain, plus Kitty Pryde, Nightcrawler and the Rachel Summers Phoenix of the regular X-Men team, plus the character Meggan (who, true to comic-book soap-opera conventions, develops a romance with Captain Britain that culminates in their marriage in the last issue of this first volume, #125). Claremont’s clearly having fun here; the stories are lighthearted, tongue-in-cheek romps (although the normal mutant angst and dangling subplots are sprinkled in too),

and he’s helped considerable by the art team of Alan Davis and Paul Neary, at least for the first seven issues; Ron Lim does a fill-in for #8, while Marshall Rogers and Terry Austin, another high-octane team, contribute issues #10 and 11. The Davis/Neary team then returns for most of a long, involved multi-dimensional journey, “The Cross-Time Caper,” in issues #12-17 (and, a little later, and #23-24); various, and lesser, other artists contribute to the other issues, although Claremont continues as writer through #27, which features art by Barry Smith and Bill Sienkiewicz. After that, pickings are slim for a while, with occasional bright spots (Colleen Doran art in #28; a Claremont three-parter in #s 32-34 that sees Kitty in an 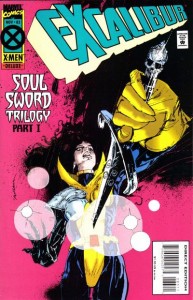 The next actual era (only the third, counting the Claremont and Davis ones) comes with issue #83, courtesy of new writer Warren Ellis. At that point, in late 1994, he was an unknown quantity, but he quickly put his stamp on the title: deft characterization, weird black-ops and occult storylines, and more energy than the book had seen in years. Much of the black-ops stuff came courtesy of new character Pete Wisdom, a cynical, chain-smoking British Intelligence agent who, against all odds, developed a 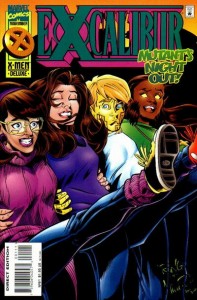 romance with Kitty Pryde that quickly became the centerpiece of the book. Ellis stays through issue #103, with a variety of artists (Terry Dodson in #83 and Carlos Pacheco in #s 95, 96, 98 and 103 being the most distinguished); probably the best issue of the lot, and the most accessible, is #91, one of those take-a-breath issues where the whole team goes out to a local pub, and in the course of the evening we find out more about the characters (and develop more affection for them) than in a whole year’s worth of most other comics.

After Ellis leaves, the rest of the run has only a few high points (Bryan Hitch art in issues # 104 and 105 are it, in fact). Then, in 2004, Excalibur Volume II begins: Claremont is back on the scripts, with art by Aaron Lopresti; this version of the title is set in the ruins of Genosha, and features Professor X and Magneto shepherding a crew of

young-uns, with Unus the Untouchable thrown in for variety. This version only lasts 14 issues, and is followed by New Excalibur in 2006, also by Claremont, but with a lineup consisting of Captain Britain, Juggernaut, Pete Wisdom, Nocturne (the alternate-dimension daughter of Nightcrawler), and Dazzler (and, later, Sage); Michael Ryan supplies most of the art through issue #8, after which both he and Claremont leave; the new scripter is Frank Tieri (of whom the less said, the better), but Scott Kolins is the artist on issue #9, so that’s something. Claremont returns with issue #16, and stays through the end of the run, with issue #24, at the end of 2007  — and it’s typical Claremont stuff, which is to say smart, well-grounded in the characters, a trifle predictable in its 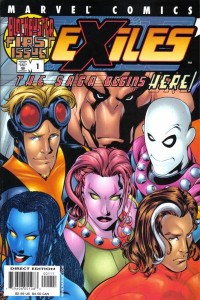 dialogue quirks, worth reading, and, after a few years, forgettable.  So far, four years later, that’s been it for Excalibur.

Exiles is around for most of the aughts — it begins in 2001 and the most recent series ends in 2009 — and it plays with some of the same alternate-world concepts that the early Claremont Excaliburs do (as do the DC Elseworlds books and Marvel’s own What If?). The hook is that the team members are all “other” versions of the regular Marvel heroes, from other versions of Marvel Earth — so

there’s “a” Blink, “a” Mimic, etc. Morph, the shape-changing, Plastic Man-like hero who was “Slapstick” for a short while in “our” Marvel universe, is the breakout character, while Nocturne, the daughter of “a” Nightcrawler, isn’t far behind. Given missions by a “Timekeeper,” the group hops from dimension to dimension, “fixing” worlds whose histories have spiraled into disaster; when a member has accomplished enough missions, they get to return to their own dimension, and are replaced by someone else (although, in practice, that seldom happens). Writer Judd Winick shows off a vast knowledge of obscure alleys and backwashes of Marvel history here, and, in the book’s 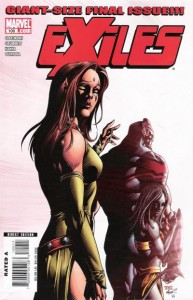 drama, scope and sense of fun, this is his longest sustained good work: issues #1-37. Mike McKone is the initial artist, but Jim Calafiore draws the most issues; after Winnick, Chuck Austen and Tony Bedard are the other writers, with Bedard supplying more scripts than anyone else, even Winnick. Toward the end (issue #90) Chris Claremont comes on board, and writes the series through to its conclusion with issue #100 (and for another 19 issues after that, as New Exiles). Whoever the writers and artists are, this is in intriguing and briskly-entertaining comic; the concept is strong enough to inspire everyone to do their best work, and fans of alternate-history superheroics, whether of Marvel or DC, should take a look at these books.

With 40 years of experience in comic reading, collecting and reviewing, English Professor Phil Mateer has an encyclopedic mind for comics. Feel free to ask Phil about storylines, characters, artists or for that matter, any comic book trivia. He will post your questions and answers on the AABC blog. His knowledge is unparalleled! He is also our warehouse manager, so if you are looking for that hard to find comic book, ask Phil!
View all posts by Phil →
This entry was posted in Marvel, News & Promos, Reviews and tagged Alan Davis, Chris Claremont, Excalibur, Exiles, Judd Winick, Warren Ellis. Bookmark the permalink.