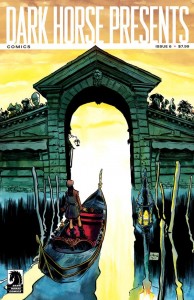 As always, this anthology delivers considerable quality for its $8 price, with stand-alone stories from Watson (Skeleton Key), Moon, and Dorkin/Thompson (their stellar Beasts of Burden) supply the meat, while chapters of ongoing serials from the others provide the side dishes — ten stories in all, 80 high-gloss pages of squarebound goodness, making this the Thanksgiving treat of the week. 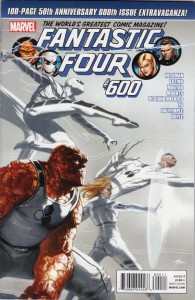 This book’s $8 too, and offers 100 pages: a suitable celebration of Marvel’s first superhero title (yes, other titles like Thor, Captain America and Spider-Man have made it to the magic 600 number first, but the FF is still its oldest continuously-published title — 50 years and going strong, despite a few renumberings). There’s no resolution to the ongoing story (that’s reserved for FF #12, in a week or two), but there’s a long chapter of it, as Earth’s heroes gather for a final battle, and then there’s a long “What happened to the Human Torch?” segment (I trust we’re all grownups here, and that no one needed a spoiler warning for that…), an episode focusing on the Inhumans (with cool-looking art by Doyle), a Reed-talks-to-Galactus interlude, and a Franklin/Leech seven-pager by Dalrymple that’s a perfect dessert. 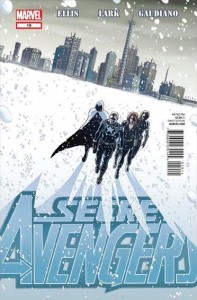 Another of Ellis’s stand-alone black-ops stories: a textbook example of how to tell a complete, intriguing tale in 20 pages, without decompression, gratuitous subplots or padding for the trade (he was doing this ten years ago with Global Frequency, and these show why that earlier, now hard-to-find series became such a cult hit). Lark and Gaudiano developed a smooth artistic rapport on Daredevil a few years ago, and their art is suitably shadowy and menacing, with enough pyrotechnics to keep 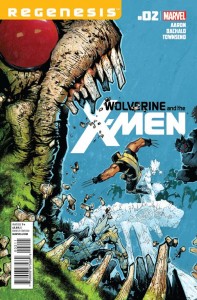 Aaron has quickly made this book his own, with equal amounts of drama, offbeat humor, and unexpected character developments; the Bachalo art is as good as always, and his sometimes-cartoony style is fluid enough to handle both the fun stuff (his Quentin Quire is a hoot) and the big-money payoffs (full-page splashes of multiple Icemen, and of an army of Frankenstein monsters, both 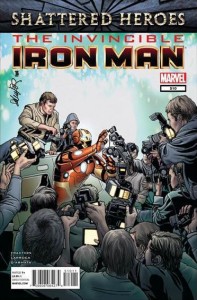 showcase his abilities). The announcement of the new X-titles made me roll my eyes, because it was such an obvious marketing ploy, but if the result is re-energized storytelling like this, then it was completely worth it.

This week’s two from Fraction: Iron Man, fresh off of Fear 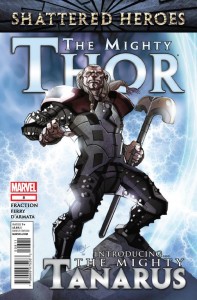 Itself, has to face a super-villain team-up of the Mandarin and Zeke Stane, while acclimating his new gnomish sidekick to Earth (complete with an AA meeting). I would have preferred an issue or three of one-shot stories instead of leaping immediately into a new multi-parter, but it’s good stuff, so it’s hard to complain. So with Thor, wherein we get an unexpected but very clever and logical explanation about the “new” Thor, Tanarus, and find out more about what happened to the old one. Both of these books are everything an ongoing superhero serial should be: fun, colorful, dramatic and exciting; if I was 12 years old, they’d have me hooked, and eagerly awaiting their arrival every month. 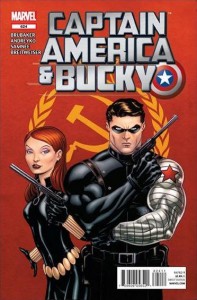 With the WW II stories finished, this offers an episode about the early years of Bucky as the Winter Soldier, teamed up with a young Black Widow. By the end, we’re up to the present day, and the news that a new creative team will be on board next issue — it looks like they’ll still be doing stories set in the past, but Brubaker’s hard-boiled scripting will be missed, as will Samnee’s efficient, deceptively-simple-looking and well-crafted art. 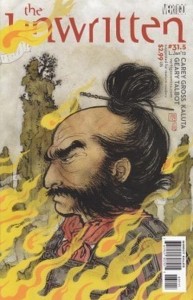 Three stand-alone stories set at various times in the past, involving the book’s shadowy, Illuminati-like Unwritten cabal and their machinations; the good news is the artist line-up — Kaluta on an Oriental tale, Geary on a Victorian-era one (of course) involving editorial cartoons during the Hearst era, and Talbot drawing knights during the time of Gutenberg. Even if you never normally read this book, get this: no prior knowledge of the plot is required, and that’s a stunning, eclectic lineup of talent. 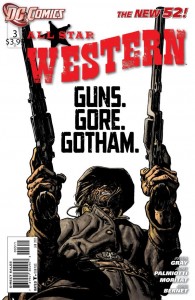 Jonah continues, grumpily, to deal with an early Gotham City that’s already corrupt (his attempts to leave, only to keep getting delayed, promise to become a running joke), and there’s plenty of gunplay and bad goings-on. Only the setting of this comic has changed from its previous incarnation, and that’s good news, because Gray and Palmiotti know their scarred bounty hunter very well, and continue to attract top-level artists to chronicle his adventures; Moritat provides the main story, while the peerless Jordi Bernet supplies an El Diablo backup strip (that makes the book $3.99 instead of $2.99, but any time you can get eight pages of Bernet art for a buck, you ought to do it). 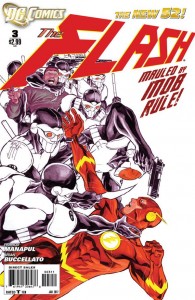 I didn’t expect to like this title, given its many aborted restarts and reboots over the last few years, but who knew Francis Manapul could write — and who knew that, given the freedom, he’d supply such classy, eye-catching art? From the page-one splash, to the double-page layouts, to the sketchier-looking art he uses for a flashback, to the Barry’s-perspective full-page panel near the end, Manapul’s technique has grown exponentially from his LSH days, and now he’s offering a comic better-looking than anybody’s in the “New 52” except J. H. Williams III.

With 40 years of experience in comic reading, collecting and reviewing, English Professor Phil Mateer has an encyclopedic mind for comics. Feel free to ask Phil about storylines, characters, artists or for that matter, any comic book trivia. He will post your questions and answers on the AABC blog. His knowledge is unparalleled! He is also our warehouse manager, so if you are looking for that hard to find comic book, ask Phil!
View all posts by Phil →
This entry was posted in New Comics, Reviews and tagged Andi Watson, Captain America, Chris Bachalo, Chris Samnee, Dark Horse Presents, Evan Dorkin, Fantastic Four, Flash, Iron Man, Jason Aaron, Jill Thompson, Jonah Hex, Matt Fraction, Secret Avengers, Thor, Unwritten, Warren Ellis, Wolverine, X-men. Bookmark the permalink.