It Came From the Back Room #36

Standard recap: I’m slowly going through AABC’s one-million-plus back-issue room, restocking the boxes on the sales floor and pulling stuff to sell as discount/overstock/special items (these are featured at the discount racks at the west end of the store for two weeks after each post, and then go to the discount racks on the east end of the store for a few weeks, and then disappear into our warehouses, so get them while you can). I’m going through the alphabet backwards (don’t ask), and at my speed (especially with the school semester in full gear), this amounts to a two-year project.  This week: 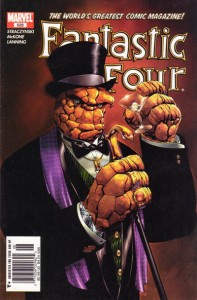 Before we finally make it to the quinultimate letter “E,” let’s wrap Marvel’s Fantastic Four:  last time, we got through the Mark Waid/Mike Wieringo years; now, there are four quick runs to cover:

This encompasses Civil War, and while there’s some forcing of characters and situations into that uber-story, Straczynski does OK; he’s always got a couple of good ideas, or little character-revealing lines of dialogue, or 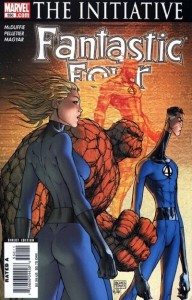 clever bits to keep things moving, even when he’s forced by circumstance to put Reed on the “wrong” side and try to justify it. McKone provides quietly competent, clear art; there’s nothing wrong with this run, but it never takes off, and fades out after a little over a year.

McDuffie’s reign is short, but features a lot of good stories; McKone (for the first few issues) and then Paul Pelletier provide the art, and they seem to be having a good time, as McDuffie brings in the Black Panther and Storm to replace a second-honeymooning Reed and Sue, and we get cosmic hijinx with the Silver Surfer, a chilling battle with the 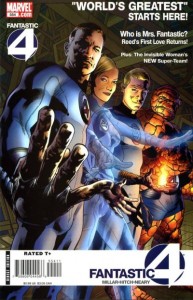 Frightful Four, and an alternate-future Dr. Doom; all three four-issue stories are classically constructed, clever, suspenseful and moving; these 12 issues put McDuffie in the top tier of FF writers.

This is a dream team on paper, but… the books themselves, like Straczynski’s, prove perfectly readable but never show the spark you’d expect from the creators. They sure are pretty to look at, though, and if the stories don’t soar (McDuffie turns out to be a hard act to follow), they’re never dull. 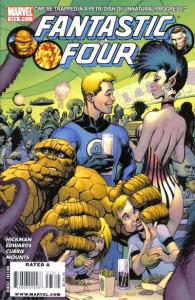 Dale Eaglesham does the art for #s 570-578; Neil Edwards is in #s 579 – 582, while Steve Epting covers #s 583 – 587, the “death of the Human Torch.” Hickman’s got ideas to burn, although he reminds me of the DeFalco years in the way he ends up juggling so many story balls for so long that the reader finds it hard to keep track, and starts losing interest. We’ll see…

Those discount Fantastic Fours are now all at the east end of the store (the Central Ave. side); in the back, in the regular cover-price rack, we’re featuring two long-running independent “E”-books that started in the ’80s:

This series, written and drawn by current Fables creator Bill Willingham, has a lot going for it, and was even hot for a while back in the Reagan era. Its view of superheroes is somehow both level-headed and quirky, as is the art; the books in the first series, at $1.50 each, are especially worth their cover price. The second series is a buck more expensive and is OK up through the middle of the long “Oblivian War” arc, when the whole thing just kind of sputters out. Willingham contributes the script, but no art, for the later of these, and when he leaves for good there’s no reason left to buy 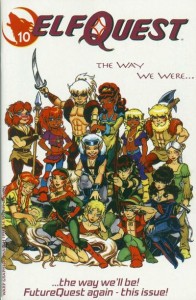 This tale about a tribe of elves who’ve bonded with wolves and have psychic powers, set in a two-mooned world of prehistoric humans, is fast-paced and, like all good fantasy, provides a vast, well-thought-out world for its readers. Wendy and Richard Pini, the co-creators (Wendy’s the artist, too) started this as a black-and-white magazine back in 1978, and parlayed it into a passionate fan base and a long series of spin-off comics and graphic novels. Rule of thumb: the stuff by the Pinis is canon, with both art and story passionate about the characters and fun, and everything else is forgettable (although New Blood, the long-running anthology title, has a couple of John Byrne stories, and a few other surprising artists, when it isn’t being dominated by the vaguely creepy, sparsely-backgrounded art by Barry Blair).

With 40 years of experience in comic reading, collecting and reviewing, English Professor Phil Mateer has an encyclopedic mind for comics. Feel free to ask Phil about storylines, characters, artists or for that matter, any comic book trivia. He will post your questions and answers on the AABC blog. His knowledge is unparalleled! He is also our warehouse manager, so if you are looking for that hard to find comic book, ask Phil!
View all posts by Phil →
This entry was posted in Comics History, News & Promos, News and Events, Reviews and tagged Bill Willingham, Bryan Hitch, Dwayne McDuffie, Elementals, Elfquest, Fantastic Four, J. Michael Straczynski, Jonathan HIckman, Mark Millar, Wendy Pini. Bookmark the permalink.