Lots of books this week, kids, so let’s do short reviews on each one. Before we get to all those DC first issues, though, there are a few other comics that deserve your attention:

Marvel’s Icon imprint having re-presented the earlier issues of this, Fraction’s indy manifesto, we now get the first new story, in color. Cutting-edge in both the visuals and the plotting, with freeze-frames, multiversal dimensional destruction, and lots of intriguing pretty people, this makes more sense if you’re already familiar with the characters, but if not just pick it up and go with it 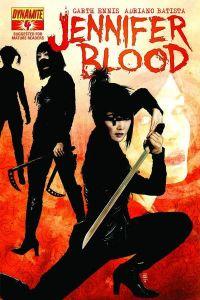 anyway; it’s got enough cool things going on to be worth the initial confusion.

Ennis’s suburban-housewife-as-Punisher riff continues, as we find out why ninjas are stupid (especially when they bring swords to a gun-and-high-explosive fight). Typical Ennis mixture of comedy and violence (weighted more toward the comedy, in the way that, say The Boys is). 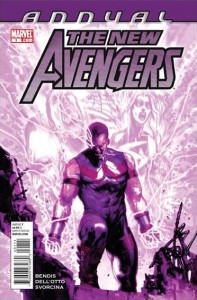 Wonder Man gets a bunch of C- and D-list heroes (literally: D-Man’s one of them) to take out the New Avengers, because he thinks they’re responsible for Bad Things happening in the Marvel Universe. Lots and lots of stomping, punching, knocking down of buildings, etc., and a good example of fun but mostly mindless superhero action (not that there’s anything wrong with that…). It’s the first of two parts, to be continued in the “regular” Avengers Annual in a week or two. 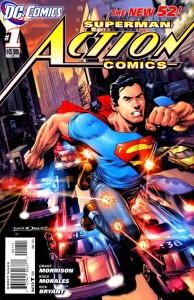 Definitely the star of the week, quality-wise; I’ve read some comments that this should have been the one new #1 DC released last week, and it’s, no question, a better comic than JLA #1 (which, while good-looking, took maybe five minutes to read, and felt like a particularly well-drawn JLA coloring book). Typical of Morrison, this is richer and denser, with more thought-provoking concepts and startling moments. A few things needed to be clearer (How is everyone on that bullet train, again? What was the plan, exactly?), but it barrels along with such panache, and ends on such an effective moment, that it’s hard to argue with its effect — and Morales, in his own way, is just as good at 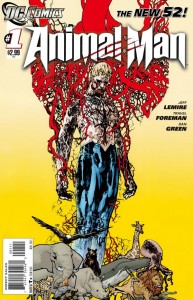 This feels like a really well-done indy book, with Lemire’s off-kilter ideas fitting Buddy and his Vertigo-tinged sensibilities perfectly, and Foreman delivering very detailed, sophisticated art that manages some startling effects. The main characters and their interesting status quo are established, we’re given possible conflicts to get the story rolling, there are two or three “Hey, that’s cool” moments, and the ending is creepy and set up to bring the reader back for more: exactly what each of these first issues should have done, and enough to make this the second-best debut of the week. 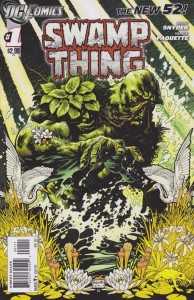 Another book with a Vertigo past, and another one with a story that’s good at establishing a suspenseful, creepy mood, at showing readers why the main character is worth reading about (and respecting that character’s past), at managing to startle us a few times, and at delivering very accomplished art that’s able to show both horror and beauty. The Search For Swamp Thing mini-series was glaringly ineffective at all of these things, and lowered my expectations for this book considerably, so it was a 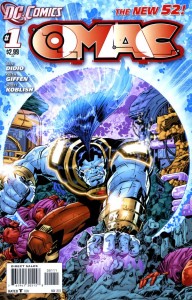 pleasant surprise to see such a well-done debut.

This was another book I began with very low expectations (the words “Dan Didio” don’t inspire a great deal of confidence), and yet it’s an unexpected delight: Giffen, who started out in the ’70s as a Jack Kirby clone (look at his early Defenders), and then blazed his own path, returns to his original influence, and the result is a hallucinagenic King Kirbyish romp: a fever dream of garish colors, Fourth-World characters, energy crackles, big panels, round-faced and large-mouthed women, and roller-coaster fun. It helps that the main character is Hulk-like in his lack of dialogue (the less of that Didio writes, the 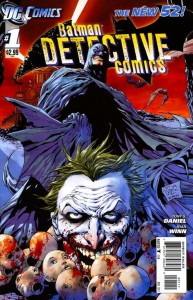 better), but as long as this is mostly a Giffen production, and as long as it maintains its blast-straight-ahead energy, it should be good.

This features a Joker story, and, like many of the better DC #1s, it’s got a last-page splash that ought to bring every reader back for its second issue. I’m typically not that big a fan of Daniels’s art, but if you admire the various big-panel money shots without squinting at them too much, and try not to think too much about the plot, it’s a brisk and 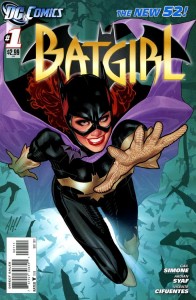 This is probably a better book on a technical level than Detective, but it’s further down the list because I expected more pizzazz from Simone, especially on a character she’s been writing effectively for many years. Wisely, she spends little time on How Barbara Got Better, preferring to get her into costumed adventure first and deal with the reasons later, and there’s another decent last-page cliffhanger, but her usually-deft characterization doesn’t appear much, the new villain seems too generic to be of much interest, and, like Batgirl itself, it feels like there are a few too many opening-night 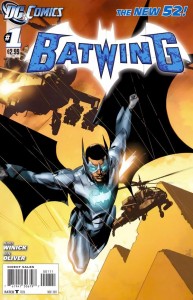 Winick gets points for avoiding cliches in the African setting, and for making us care about the characters right from the start. His style of decompressed storytelling makes this go by a tad too fast, but Oliver’s painterly-looking art is unusual enough to be interesting, and very smooth, and out of all the last-page cliffhangers this week, this one’s the most startling; it’ll be very hard not to get the next issue, just to see how our hero can possibly get out of it. 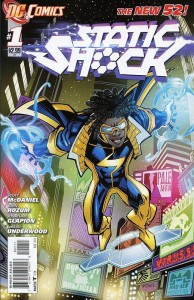 Static was good when it was written by his creator, Duane McDuffie, and that’s obviously not a possibility here, but Rozum’s previous imagination and cleverness in books like Xombi were enough to at least get me to pick up the book. It’s OK — the art has a few good high-tech effects, and Virgil’s new job and relationship with his family are covered well. Overall, no big delights, but there’s another WTF ending (gee, you think the editors were pushing those?) that’s going to get me back next month.

The art’s solid, if unspectacular (the minimum you’d expect from the old-school creative team), but it’s the same writer on the same character as before. New look (the goatee’s gone, making Ollie look almost exactly like Roy Harper), and the supporting characters are, for now, completely different, but it’s still a guy shooting various arrows at various bad guys; there’s only so much you can do with that, you know? If you were a fan before, this will keep you around, but if you didn’t see the point of the character previously, this won’t convince you to start following his adventures. 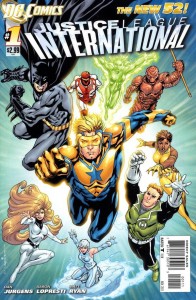 Same as the previous review: solid but unspectacular, with a veteran team of creators on characters that we’ve mostly seen on the title before (Booster Gold, Guy Gardner, Fire, Ice, Rocket Red) and a few new additions mixed in. Batman shows up, and the team gets together and fights somebody-or-bodies, but even though I read this just a few days ago I can’t remember anything else about it; it’s that kind of book. 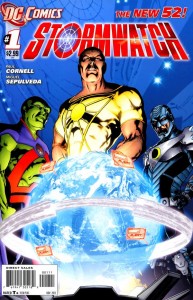 Even less memorable than JLI — something of a disappointment, given that Cornell’s usually a dependably-intriguing writer, but maybe these characters have been booted and rebooted so many times over the last few years that there’s just no way to care about them — and the generic-looking art doesn’t offer any visual grabs. What comic were we talking about again? 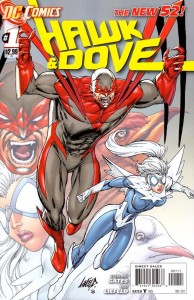 Generic writing and, well, Rob Liefeld art, on characters that he began his career with 23 years ago, and draws not one whit better today. Thanks to Dan for pointing out that, in one panel, Hawk has fangs, although they don’t appear anywhere else. That might be foreshadowing of some clever plot twist, but it’s more likely to be simple slapdash carelessness. As for the rest of the art: I’m not sure; it’s hard to see the page clearly when your eyes are bleeding. 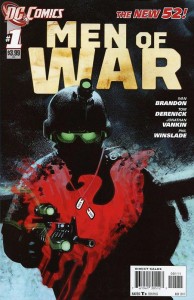 No credits, because I completely forgot this was one of the DC #1s, and left it on the stands. Sadly, judging by the number still there yesterday, pretty much all of you did the same thing.

With 40 years of experience in comic reading, collecting and reviewing, English Professor Phil Mateer has an encyclopedic mind for comics. Feel free to ask Phil about storylines, characters, artists or for that matter, any comic book trivia. He will post your questions and answers on the AABC blog. His knowledge is unparalleled! He is also our warehouse manager, so if you are looking for that hard to find comic book, ask Phil!
View all posts by Phil →
This entry was posted in New Comics, Reviews and tagged Action Comics, Animal Man, Batgirl, Batwing, Casanova, Detective Comics, Green Arrow, Hawk and Dove, Jennifer Blood, Justice League International, Men Of War, New Avengers, Omac, Static Shock, Stormwatch, Swamp Thing. Bookmark the permalink.