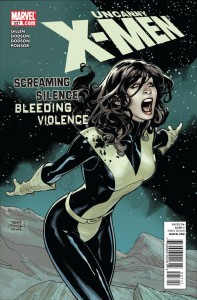 The two main X-books are in good hands right now: here, Gillen is in the middle of a sequel to Joss Whedon’s “Breakworld” story, and it’s the point in the narrative where things are going very badly for… well, everyone, but especially for Kitty, who’s the focus of this issue. Solid characterization, with clear motives even for the bad guy, and the Dodsons’ art is both pretty and expressive enough to make Kitty’s wordless attempts to get help poignant and clear. Lots of good bits (Wolverine to villain: “You’ve been torturing my friends. Summers too.”), and a cliffhanger guaranteed to bring readers back for the next installment. 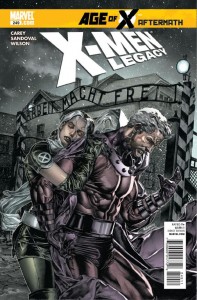 This incarnation of the X-group is still dealing with the aftermath of the surprisingly-readable “Age of X,” and while the focus is on Magneto and Rogue (with the latter revealing part of his concentration-camp origins to the former), there are also sequences with Frenzy and Legion that show promise (writers always seem to love multiple-personality heroes, and here Carey seems to be using David to channel Grant Morrison’s Crazy Jane from the old Doom Patrol). Sandoval’s art isn’t at the level of the Dodsons’ over in UXM, but it’s serviceable enough, although the attraction here is concentrated more in the words than the pictures. Whether any of this will get derailed by the upcoming “Schism” crossover (the economics of corporate character groups, and how to goose their overall sales, trumping just leaving individual creative teams alone to play in their own gardens) is unclear, but Carey’s proven capable of dealing with such distractions before, so there’s hope. 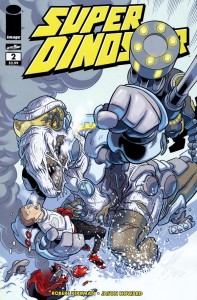 For Kirkman fans, this is the anti-Walking Dead, a big bright super-powered bit of fun fluff, delivering just what its title suggests: a kid who fights world-threatening menaces with an intelligent armored dinosaur full of high-tech surprises. Two issues in, it’s teetering on a tightrope strung between Awesome and Stupid (and a few of the seams in the concept and plot are still showing), but anyone with a soft spot for big goofy Saturday-morning cartoon pizzazz should give this a look. 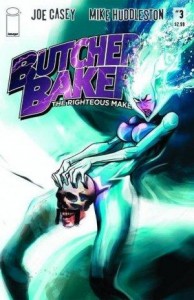 Like Super Dinosaur, this had an intriguing, high-concept first issue, but it’s been going downhill since then, and I’m just about to give up on it — the first-issue promises of cutting-edge storytelling and unique ideas have devolved into a standard super-villains-out-for-revenge bit, and there’s nothing here in technique that American Flagg didn’t do 25 years ago (or that Casanova doesn’t do better now). It’s not bad, mind you, but it’s considerably less interesting than it thinks it is; right now, the Huddleston art — splashy, colorful and with technique to spare — is all that’s keeping me around.

As you can tell from the creators’ list, this is a big-ass anthology title (84 pages, counting the cover by Paul Pope, for $7.99), offering nine eight-page stories, all science-fiction-related. The highest-profile contribution is from the Azzarello/Risso 100 Bullets team, and it’s the only one that’s part of a serial: the good news is that there will be more installments, while the bad news is that not much happens in this one (it sure does look nice, though).  Of the rest, Jeff Lemire’s “Ultra the Multi-Alien” tribute stands out, while otherwise the Bobillo and Colden-drawn efforts have the most interesting art, and the Cornell and Milligan scripts offer the best ideas. Is it worth $8? Sf fans, and fans of the creators involved, should think so; others might want

to flip through it on the stands before taking the plunge.

Two more installments of Shooter’s Gold Key character revivals for Dark Horse, and both continue to (a) provide solid stories and entertainment, and (b) not sell well. They’re worthwhile, though: Shooter is very good at making each issue easily accessible for new readers, filling

in all the details with a few subtle asides and showing character in bold, simple strokes. Magnus is slightly better, maybe because the original concept is more solid — the title tells you who he is and what he does, after all — and because Shooter’s already spent a lot of time with the character, thinking about his world and defining themes. Samson‘s pretty good, too, though — its  post-apocalyptic tribes and their various leaders, some craven, some savage and all but a few maneuvering for personal power and conquest, feel like the product of a creator who’s read a lot of history, and been involved in a number of power struggles himself. Both have very clear and appealing art; Shooter’s always excelled at getting the best out of his artists. Buy these while you can, and hope that they stay around to build their worlds and tell their stories for a long time.

Stuff I liked enough to buy, but don’t have anything new to say about, so 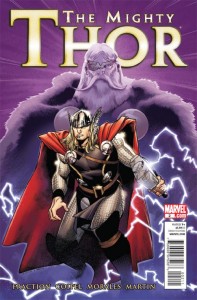 look up past reviews in the archives if you want to know:

With 40 years of experience in comic reading, collecting and reviewing, English Professor Phil Mateer has an encyclopedic mind for comics. Feel free to ask Phil about storylines, characters, artists or for that matter, any comic book trivia. He will post your questions and answers on the AABC blog. His knowledge is unparalleled! He is also our warehouse manager, so if you are looking for that hard to find comic book, ask Phil!
View all posts by Phil →
This entry was posted in New Comics, Reviews and tagged Azzarello, Carey, Dodson, Gillen, Jim Shooter, Kirkman, Lemire, Magnus, Mighty Samson, Paul Pope, Risso, Strange Adventures, Super Dinosaur, X-men. Bookmark the permalink.