It Came From the Back Room #23 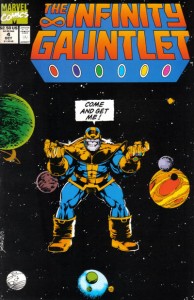 Standard recap: I’m slowly going through AABC’s one-million-plus back-issue room, restocking the boxes on the sales floor and pulling stuff to sell as discount/overstock/special items. I’m going through the alphabet backwards (don’t ask), and at my speed, this amounts to a two-year project. This week, we’re doing miscellaneous Marvel and DC “I” books, and, as always, discount copies are available on the rack near my corner by the west end of the store:

This was one of DC’s first attempts to make its mainstream superhero comics more “adult,” almost seven years ago 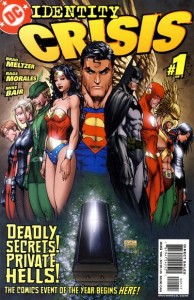 now, and they got a lot of flack for taking fondly-remembered characters and doing terrible things to them — most notably, Sue Dibney, the wife of the Elongated Man, who gets killed in the first issue, while subsequent issues reveal that, years before, she’d been raped by bad guy Dr. Light. Melding adult storylines with superheroes had been covered before, of course, in books like The Watchmen, and very well, but those weren’t established characters (who were the subject of children’s cartoons, to boot), and the combination here made the series controversial. It doesn’t quite come off — the whole discussion of whether to mindwipe villains, for example, seems forced and even silly, given the context — but writer/creator Brad Meltzer, 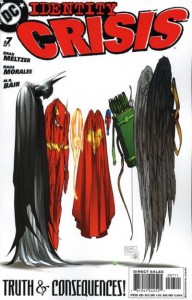 an established novelist, knows how to tell a story, and the mystery itself is paced and revealed well — although most current readers have the disadvantage of already knowing whodunnit, and without that mystery propelling it, there isn’t the sheer what-happens-next energy that drove the comic in serialized form. The art, by Rags Morales, is sometimes very good — especially when he’s doing a posed set piece or when he’s called upon to show emotion through the characters’ body language and facial expressions — but then in other places devolves into standard superhero tropes. Purely as a story, it works, and if you haven’t read it, it’s definitely worth a look — especially with the issues at cover price.

This event followed Identity Crisis by about a year and a half, building on some of the 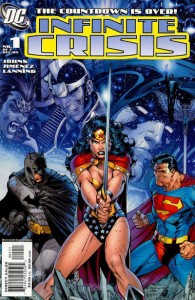 aftereffects of that series, and was also a 20th-anniversary tribute to the 1985 Crisis on Infinite Earths. Like the original, it’s a sprawling superhero epic, with a cast of hundreds, and whether you like it depends quite a bit on whether you like Geoff Johns and his continuity-driven, big-bang brand of storytelling (I like it just fine, but readers unversed in DC history — and, especially, in the original Crisis — risk a headache from all the plot points, callouts and Easter eggs). The art is mainly by Phil Jimenez, George Perez and Jerry Ordway, all of whom have a knack for being able to draw very large casts capably, and with styles that mesh well enough to keep the transitions between artists from being jarring; as a big crossover mini-series, this delivers the expected action and pyrotechnics, and is one of the better ones. 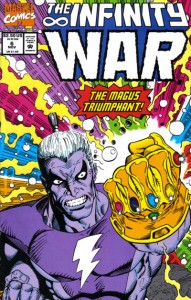 This is one of the better ones, too, at least for Gauntlet. Comics editors have an affinity for “infinity,” a word both flashy and vague enough to cover almost any kind of book — but it mostly signifies “cosmic,” and no one does cosmic better than Jim Starlin, who practically invented the genre with his Captain Marvel/Thanos/Warlock books in the ’70s. Even now, the concept of the Infinity Gauntlet has legs (er, arms? fingers?), as witness its recent appearances both in a Bendis Avengers storyline and as a cameo in the Thor movie. Gauntlet offers the original of these ’90s cosmic crossovers, and the best, especially with the George Perez art in the first few issues (after which Ron Lim takes over: a clear step down, but competent and efficient enough — he draws all those characters on model and on time, a rare combination — to get to draw the subsequent two series, too). The law of diminishing returns threatens both War and Crusade, although the 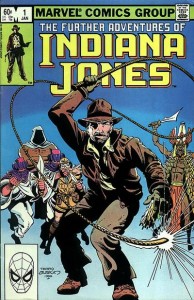 Starlin traveling soap opera (with not only Warlock and his variations, like the Magus and the Goddess, but also Pip, Gamora, Death and the increasingly complicated and sympathetic Thanos) keeps everything fizzing enough to be readable to the end.

This was originally a Marvel book, although it was cancelled after 34 issues, and Dark Horse eventually picked up the franchise, and published a number of mini-series utilizing Professor Jones. The first two issues of the Marvel run are by John Byrne and Terry Austin; that 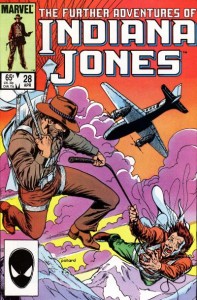 quality doesn’t last, but later issues, mostly one- and two-part stories written by David Michelenie, are by a revolving smorgasbord of artists, and offer some interesting stuff: Gene Day art in #3, Howard Chaykin/Austin in #6, David Mazzucchelli in #14, and Steve Ditko (!) in #21 and #s 25-28. The Dark Horse titles don’t have anyone as startling as Ditko (although the always-solid and underappreciated Dan Barry draws quite a few of them), but being four to six issues each offers the luxury of more worked-out plots and stronger characterization.

Roy Thomas’s tribute to the Timely Comics Golden Age, with Captain America, the

Human Torch and the Sub-Mariner (along with Bucky, Toro and others) fighting Nazis, Nips and other antagonists in the early days of World War II. Artist Frank Robbins, whose impressionistic, fluid style proves a perfect balance to Thomas’s erudite, sometimes-too-continuity-heavy scripts, helps to make this series a classic; once he and Thomas leave, with issue #28, the quality drops considerably, but everything up until then is a fun, four-colored fever dream.

After Roy Thomas left Marvel for DC, sometime in the 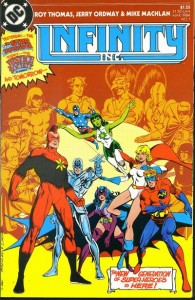 very early ’80s, he created All-Star Squadron, a WWII book that did for Golden Age DC characters what Invaders had done for Marvel’s. Infinity, Inc., from around 1984, is a spinoff of sorts of that book — it’s set in the modern-day DC Universe, but features the super-powered sons and daughters of the original members of the Justice Society of America (and their various hanger-on, antagonists and associates). Jerry Ordway did the art for the first ten or so issues, but the interest in the title today is primarily because of the brand-new artist who took over with issue #14 — Todd McFarlane, who then stays on the book all the way through issue #37. Thomas stays through to the end of the series with #53; fans of the current-day JSA would be interested in this title, since it features Jade, Obsidian, Power Girl and other current members of that book and the JLA. 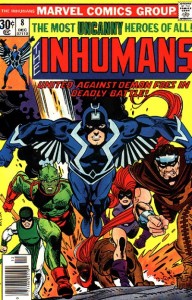 This Jack Kirby/Stan Lee creation of a shadowy, super-powered hidden society, led by the supremely powerful but silent Black Bolt (whose vocal-based powers mean that even a whisper from him can destroy a city block), has been kicking around since the mid-’60s. The mid-’70s first volume of their own title, written by Doug Moench, only goes 12 issues but offers art from people like Gil Kane and a young George Perez; later attempts, like the late-’90s mini-series from Paul Jenkins and Jae Lee, or the Nu-Marvel 2003 run from Sean McKeever and Matthew Clark, have been interesting but never managed to get much traction. Most recently, the Inhumans have been considered one of the “cosmic” groups, and so appear a lot in books associated with the genre: Annihilation, Reign of Kings, Guardians of the Galaxy, etc.

With 40 years of experience in comic reading, collecting and reviewing, English Professor Phil Mateer has an encyclopedic mind for comics. Feel free to ask Phil about storylines, characters, artists or for that matter, any comic book trivia. He will post your questions and answers on the AABC blog. His knowledge is unparalleled! He is also our warehouse manager, so if you are looking for that hard to find comic book, ask Phil!
View all posts by Phil →
This entry was posted in Comics History, DC, Marvel, News & Promos, Reviews and tagged Brad Meltzer, Frank Robbins, Geoff Johns, George Perez, Identity Crisis, Indiana Jones, Infinite Crisis, Infinity Gauntlet, Infinity Inc., Inhumans, Invaders, Jim Starlin, Rags Morales, Roy Thomas, Thanos. Bookmark the permalink.